This exhibition of Swiss artist David Weiss looks at the years before he and Peter Fischli became a famous duo. A sense of childish whimsy pervades these formative works, done when he was immersed in Zurich’s bohemian counterculture

Before his death in 2012, David Weiss began to organise his notebooks, sketchbooks and early works on paper, amassing an archive of material that forms the core of the exhibition now on view at the Swiss Institute in New York. Though the artist is best known as one half of the partnership of Fischli/Weiss with Peter Fischli, this display takes us up to the years before this collaboration and provides insight into Weiss’s formative years.

Born in Switzerland in 1946, he attended art schools in Zurich and Basel between 1963 and 1965, training as a stone-carver and a draughtsman. In 1966, he spent six months in London, experiencing the swinging 60s, before embarking on an extended trip across the globe. He went first to Montreal and then New York. From there, he ventured to San Francisco and Berkeley, where he immersed himself in hippie culture. After boarding a cargo ship to Cuba, he headed back across the Atlantic to Tangier, Algiers, Tunis, Berlin, and finally back home to Switzerland.

By the late 70s, Weiss had opened a macrobiotic shop and joined Commune H, mixing with Zurich’s bohemian counterculture scene. It was within this milieu that he first met Fischli, in 1978. The current exhibition explores the work Weiss produced between what he affectionately later described as his Grand Tour and the beginning of his 33-year-long partnership with Fischli in 1979. While most of the works are undated, it is tempting to see one small drawing in marker and pen on paper as an evocation of time spent in sunny climates. Here, a young man sporting jet-black sunglasses and wearing a pair of red Speedos that match his baseball cap leans casually against a palm tree, posing with one hand on his hip. He stands in front of an expanse of water that mirrors his distorted reflection and the pink and red sky beyond.

Among the earliest works are three line drawings of abstract, fantastical landscapes, titled The Terribly Nice Little Garden, The Little Star Garden, and For Carmen, from David, all dated 1969. Inside each angular fir tree, star-like flower, or floating mushroom is a letter or number, perhaps a cryptic code or simply a guide to a paint-by-numbers scheme. There is a sense of childish whimsy across much of the show that sometimes barely masks darker themes. In a comic strip from 1968, The Big Society Game or the Story of the Beagle Commune, Minnie Mouse comes up against a group of gangsters and must navigate the fraught, adult world far away from the magical safety of Disneyland – she is interrogated, bound and accused of taking drugs.

Subjects repeat across the numerous small drawings, which are displayed at eye level in a neat long row on one of the gallery’s longest walls. A monstrous grinning half-bat/half-snake creature that hangs upside down with its tail curling around its body in a neat swirl appears frequently, often as the sole figure against a caustic yellow background. Anthropomorphic flowers, perhaps studies for Weiss’s artist books Blumen I and II(both 1978), populate several scenes. In one sketch, a flower seems to be pulling its own petals from its head in some form of macabre (and comical) stripetease as it brandishes two petals like a cabaret dancer performing a fan dance.

In the late 70s, Weiss produced a handful of artist books, many of which are on view at the Swiss Institute. One of the most eloquent and beautifully conceived of these is Up and Down Town from 1975. Produced in a special edition of 1,000 copies, the small book includes a series of cityscapes in the rain, with precise, thin diagonal lines obscuring each scene with a profusion of raindrops. The slipcase for this book is noticeably warped and the ink has started to run at the bottom corner. The damage is intentional: after the books were completed, Weiss left several copies outside in a storm, bringing his delicately observed drawings into direct contact with their subject.

Composed primarily of sketches, or perhaps even unfinished works, the drawings provide insight into Weiss’s thought process. We see the artist responding to his environment, to pop culture, and certainly to the styles of other artists (it is tempting to see the influence of Sigmar Polke, whom Weiss knew, or even Philip Guston). The exhibition manages to present an immense amount of material and it is a treat to see so many rare works together. 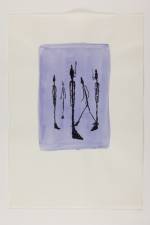