In his second solo show with Gagosian, Reed displays his many strengths in 15 new and impressive works 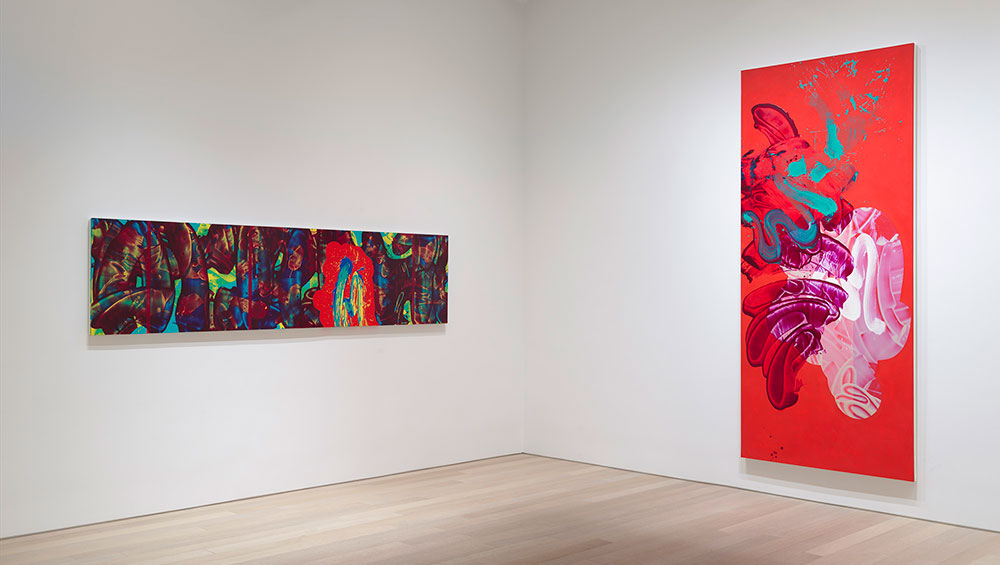 David Reed’s 15 new paintings – some recent, some begun more than a decade ago and recently completed – are quite an eyeful. In his second solo show with Gagosian, this esteemed New York abstract artist’s many strengths are on full, fortissimo display, the perceptual pedal floored.

There is, of course, the deft, animated handling of his medium. The lustrous strokes evoke slippery, unfurling ribbons of varying heft. Some are translucent, gossamer, others thicker, and it is a pleasure to follow his strokes as they glissando up, over, down, in and out, twisting and pivoting. It is an exercise in attentiveness that makes you complicit in the process. Some have raised edges, their tactility thrillingly contradicting what might seem to be smoothly immaterial. The thrill, perhaps, is the pull between analytical proposals and the seductive materiality of paint – a reminder that these works – indeed, all such works ­need to be seen in actuality.

Then there is his palette. Its spectrum has little to do with nature, but is, instead, gorgeously artificial in appearance, the mauves, roses, chartreuses, teals, even its reds, yellows and greens, not that of the pastoral, but the urban, industrial and technologised, the mix of colours in coolly contentious debate with each other that at times heats up. That conversation is almost audible, the hues verging on the synaesthetic, tintinnabulating (Edgar Allan Poe’s wonderful word) against eye and ear. Then there are the several works in grisaille that are even more denatured, presenting his intricately structured weavings uncamouflaged by colour, his paintings noir, perhaps; Reed is an ardent cinephile.

The layerings could be read as foreground, middle ground and background, but with caveats as the spatial parsing becomes more indeterminate, subjective, the backfield restive, in dissolution. Several of these works are festooned with an irregularly shaped patch of paint inside which, or on top of which (the optics oscillate) rests a squiggled flourish of paint that suggests a brushmark. That patch is often opaque, higher keyed or in a contrasting colour, pinned to the frontal plane like an honorary medal, forcing everything else behind it, adding a further complication to spatial assignations, to Reed’s elegant intimations of the illusionistic.

And there is the scale. The paintings are sized extra-large for impact, the proportions often extreme, quirky, stretching upwards or sideways beyond canonical dimensions in a kind of updated mannerism. Reed has long been intrigued by mannerist paintings and what happens in the more esoteric schools of painting.  One of the few titled (parenthetically) works here is in homage to Domenico Beccafumi, a 16th-century Sienese artist and his Fall of the Rebel Angels (c1520s). On the other hand, the extended formats might also suggest Asian scroll paintings and film, the surface of a number of paintings divided by thin coloured lines like a sequence of stills. Other works are bracketed on one side with a monochromatic band, reminding us, if we needed reminding, that these are paintings about paintings more than about anything else.

Another titled painting is dedicated to artists Jeremy Blake and Theresa Duncan, the “Golden Suicides,” as Vanity Fair called the young couple, that was begun in 2005. The softly pearlescent painting radiates a halo of sorts, its composition montage-like, partially gridded and generous in height and breadth, the ratio less exaggerated, about 2:1. It is reminiscent of the central panel of an altarpiece and is in sole possession of one wall. Again, it plays with positive/negative space, with intimations of other media, such as film or photo negatives, its lyrical colours on fade, tender. It seems a memory of Blake’s characteristic blasts of vivid colour, referred to perhaps in the bright insert on the upper left, while the rest of the painting is a ghost of his tonal detonations. Reed’s work may be reserved, but it is not without feeling – here, that of loss.

Another painting, #712, is a bit of an outlier. On the smaller side, although certainly not small, its ground is unusually bare, the explosive central image grey-scaled, with exuberant ink-like splatters of black paint around it, the surface partially intercepted by a pair of coloured bands that occupy and hold the frontal plane. The central image teases with a hint of the figurative. I see, among other possibilities, Martin Schongauer’s celebrated The Temptation of St Anthony (c1470-75), its whirl of devils abstracted. This kind of visual imagining is fanciful, but it is one reason that many abstract artists do not title their works, so that just such fleeting allusions might come into play, leaving the image open-ended, dynamic – and a renewable, relatable resource. 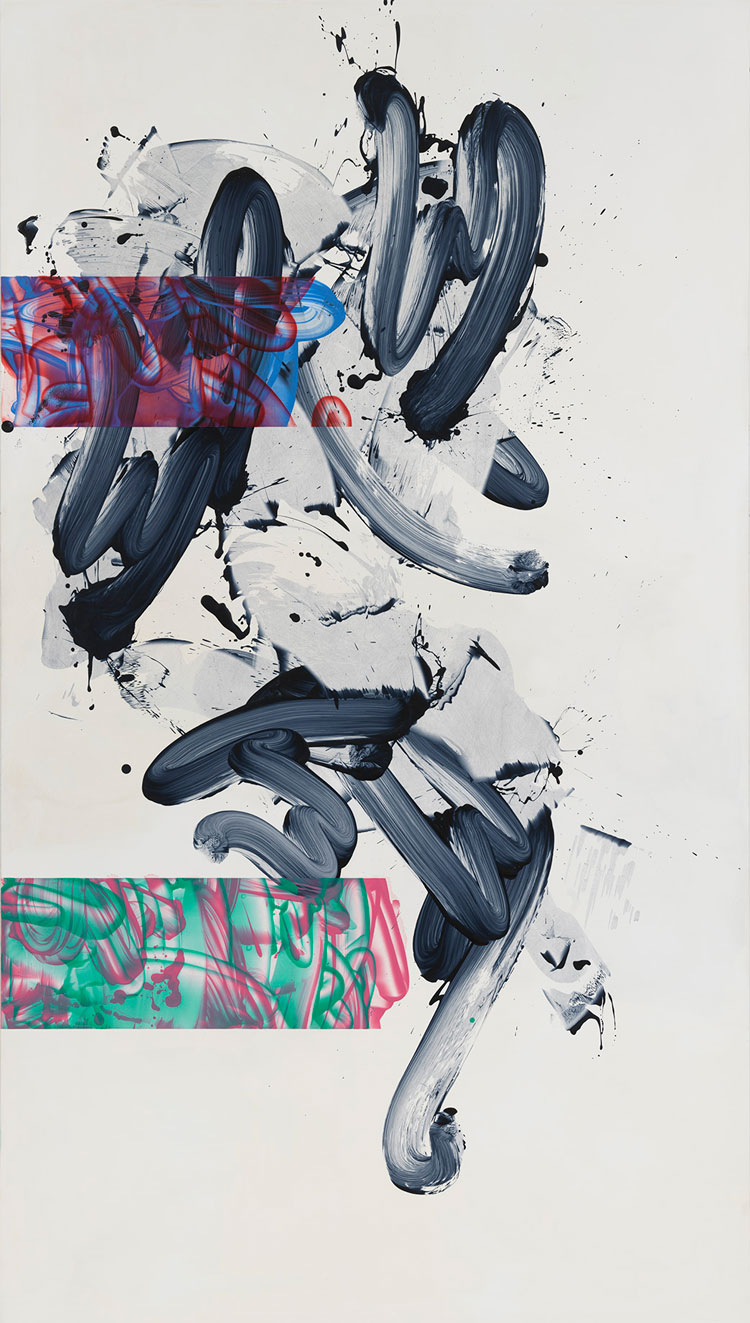 To not refer to nature is harder than it might appear. After all, if you cross a vertical line with a horizontal, a landscape almost inevitably comes to mind. Some of our foremost abstractionists, it turns out, have admitted to real-world references, the curve of a hill, say, visible from a studio window, a wall with a particularly compelling configuration or association. But Reed’s paintings seem to remain mostly in the realm of painting about painting as art history, as form and process. They make you think about painting and decisions pertinent to painting, of utmost importance to those who care about such things, who think it matters, as Reed does, as lovers of the medium do.