“I am 23 years old and wear glasses,” one of the inscriptions on Hockney’s 1961 print Myself and My Heroes tells us. Perhaps this is a response to Allen Ginsberg’s poem A Supermarket in California.1

As the curator Richard Lloyd, our guide through the Hockney, Printmaker show, explains, Hockney is “continually quoting from other artists, there’s a dialogue going on – a wonderful energy”.2 Lloyd’s passion for Hockney’s work began in 1989 when, as an auction house picture porter, he came across Myself and My Heroes, showing Hockney’s spectacled self facing the haloed Whitman and Gandhi. With scribbles and text unceremoniously scratched over the composition, this image – among what was then known at the auction house where Lloyd worked as “School of modern British Dull” – must have leapt out of the grey landscape like a neon sign. “I can still remember the shock,” Lloyd recalls.3

A freshness of eye is spread throughout this exhibition, the process of seeing being one of Hockney’s primary passions. This fascination, together with a gleeful appetite for exploring all visualising and printmaking tools and technologies – from the camera obscura of antiquity to the inkjet print of a digital image drawn on an iPad – has kept Hockney’s practice vibrant over the 60 years of image-making displayed in this exhibition.

Lloyd introduced us to Hockney’s early work. As a student at the Royal College of Art, Hockney quickly ran out of painting materials, but discovered that the print department supplied free materials. In those days, the RCA print room was at the top of a staircase leading from the silver department in the Victoria & Albert Museum. Rumour had it that when a painting student borrowed a Constable sketch to include in his end of year crit, the V&A closed off the staircase between the college and the museum. It is unlikely that this unsubstantiated tale involved Hockney, yet when the RCA refused to give him a diploma because he would not complete the required essay, he showed his revolutionary spirit by printing his own graduation certificate. This, Lloyd tells us, shows Hockney’s ability to “cut through convention – I’m here at art college, not to do art history”.4 Gall in the face of authority takes more than youthful chutzpah – perhaps we need look no further for a source of his self-confidence than the lithograph of his mother (Woman with a Sewing Machine, 1954), made when Hockney was 16. Laura is sitting quietly composed; and she is glowing in the gaze of her son’s observing eye.

While Hockney’s sexuality in the mid 60s, was obviously non-conformist for British mainstream society of those times: “… he never saw himself as a gay activist, [yet he] visually challenged the legal and social repression of gay and bisexual men.”5 Hockney’s images for CP Cavafy’s poems, which “unashamedly described the city of Alexandria’s homosexual subculture of 1910-20s were published just as homosexuality in the UK was being decriminalised”.6 A collection of startlingly clear line prints, these images are “pioneering representations of gay identity and sexuality”.7

Hockney’s vision is served by a wide area of interest, as this exhibition shows. We see in his images for the fairy tales of the Brothers Grimm both hilarity – The Enchantress (1969), is an ugly old bloke – and dream – The Boy Hidden in a Fish (1969) might be trapped floating for ever. In the Hollywood Collection, Hockney created a set of images for any starlet who might require an instant art collection, including one titled Pointless Abstraction Framed Under Glass (1965).

As though feeling the need to counter the criticism sometimes made by those of a fine art minimal and conceptual persuasion, who scathingly accuse the braces and bowtie Hockney of making decorative imagery, Lloyd told us: “As soon as Hockney found something easy … he stopped … I don’t think a fantastic end point is his intention – [his work] is informed by his research into human perception.”8 Certainly the marks Hockney makes contain that quality envied by any mark-maker, the freedom of not being constricted by minding about the end result, yet energetic care in the process to sustain an agitated exploration (unsatisfied with formulaic repeat) to progress the personal practice.

Wow and oh, heavens, Hockney can draw like a giddy angel in flight – relishing all manner of marks and lines, balancing composition in space and pattern and tone. And here in this wide range of prints, every sort of scratch, engraving, sugar lift, aquatint, acid etch and oil resist has been painstakingly attended to.

This show takes us through a myriad of 2D imagery and up to the slipping of multidimensional representation. “He feels the way the Chinese depict reality is much closer to reality,” Lloyd explains. “There’s no one vanishing point. Your eye ranges over the image disappearing in different places.” In Tyler Dining Room (1984), and Hotel Acatlan: Two Weeks Later (1985), the images spread out in visual Doppler slips, stretching viewpoints free from one traditional vanishing point. As Cubist-type perspectives layer multiple points of view over each other, our reception is agitated from perceiving a still 2D to interpreting a shifting between a number of places. “Hockney,” Lloyd tells us “has been a fan of Cubism … the reason is that it incorporates time. The camera not only contains perspective, it also contains movement.” Looking at Walking Past Two Chairs (1984-86), is like being in a train as it passes round a building, and seeing that building turning on its axis. These images, which push themselves from a flat, still plane, readdress a dialogue around ways of perceiving and seeing, and reflect current creative technologies – and the ever-present motion of our contemporary society in which stillness is now the extraordinary – and string theory; multidimensional existences are current research favourites with forward thinkers and makers.

Hockney’s passion for seeing connects to his facility for recognising serendipity and joyfully interpreting, or perhaps one should call it “conjuring”, synchronicities in the everyday – a visionary view layering poetry into the otherwise mundane. Take, for example, the early lithograph Woman with a Sewing Machine (1954), in which his mother, obligingly posed in this homage to Edouard Vuillard, sits in striped shirt against a chequered and paisley patterned interior, the composition balanced by a big old sewing machine (Vuillard’s mother was a seamstress). Or the 1954 self-portrait in which he posed as Stanley Spencer, or perhaps (as Lloyd observed in Fish and Chip Shop, 1954), Andy Warhol waiting to be served at Hockney’s local chippie. Another much documented image, The Marriage (1962), (Hockney later completed a painting of this composition), captures an instance of his visionary conjuring – explained in a quote by Hockney on an accompanying label – losing and then finding a friend in a museum, Hockney tells us, “… I saw him in profile and to one side of him … also in profile … was a sculpture … of a seated woman … Egyptian, I believe, for a moment they seemed held together like a couple posing”, and in catching that moment that slips clear of most of us as we rush through our lives, Hockney invents a different narrative from a momentary synchronicity.

How The Dulwich Picture Gallery managed to stage this coup – hosting 60 years of Hockney’s printmaking from right under the noses of the central London art cathedrals – is in itself worth a round of applause. This exhibition is a triumph – and, heavens, this master can draw! 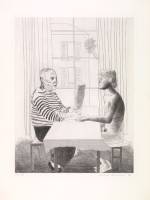 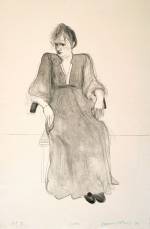 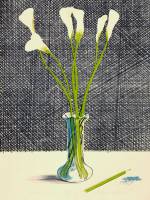 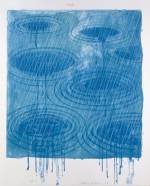 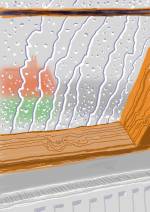 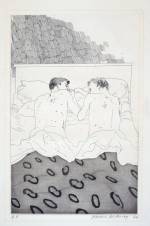 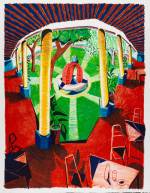 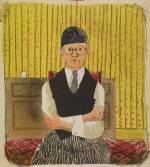