Unusually for a landscape artist, David Hepher has for 40 years focused almost exclusively on the tower blocks of south London. In this retrospective, his large-scale triptychs evoke an almost elegiac sense of time and place 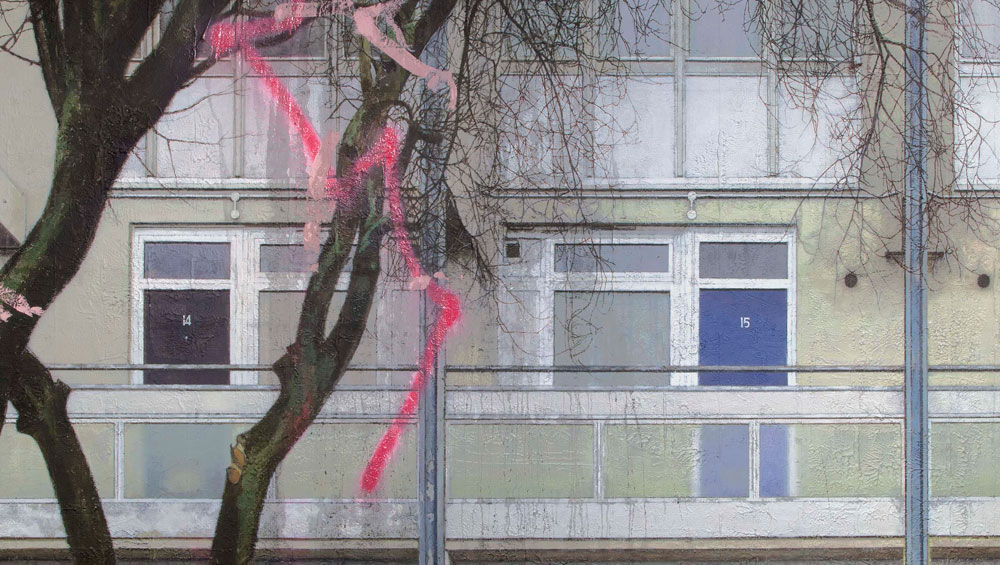 The Aylesbury Estate is coming down. Built by Southwark council in Walworth, south London, between 1963 and 1977 in a fit of utopian optimism, the Aylesbury is purported to be one of the largest public housing estates in Europe. Soon after completion it began to lose its futuristic sheen amid structural decay, crime and vandalism – a trajectory by now sadly familiar to Londoners and city dwellers across the UK. Like the nearby Heygate Estate in Elephant and Castle, the Aylesbury is due to be torn down and replaced with smaller, more innocuous towers, fashioned with burnished-metal balconies and stick-on bricks.

The rapidly changing face of inner-city south London makes this retrospective exhibition of David Hepher’s work seem timely indeed. The artist has said the Aylesbury is to him what Stour Valley was to Constable or the Medway to JMW Turner; Hepher, born in Surrey in 1935, has over the past 40 years focused his attention almost exclusively on the high-rises of south London, his large-scale landscape triptychs evoking a strong, almost elegiac sense of time and place. Grain of Concrete at Flowers Gallery, Kingsland Road, is a brisk journey through Hepher’s long career, and coincides with the release of a monograph on the artist’s practice by art critic and author Ben Lewis.

Opening the show are three of Hepher’s 1959 Upperthorpe paintings, muted vistas of Sheffield terraces, early examples of the artist’s interest in landscapes of urban living. These works are painted in the “Euston Road” style, which was popular while Hepher was a student at Camberwell School of Art in the 1950s. Mistrustful of modernism’s abstractions, Euston Road painters, such as William Coldstream and Graham Bell, employed a realist style, showing a keen appreciation for the texture and physicality of their subjects.

These threads are easily picked out in Hepher’s more mature painting – the cut-glass clarity of Camberwell Flats by Night (1983), or the frothy textures of his paint on concrete-treated canvas. Hepher’s Upperthorpe paintings share their space with the paintings No 19 (1974) and the right-hand panel of a 1972 triptych, Mr B the Occupant of No 20 leaving his house one morning last January. These paintings, similar in technique, introduce key stylistic tendencies found in Hepher’s later works. These near life-sized paintings of Edwardian terraced homes are typical of the repetitious architecture in the area of south London where Hepher was living in the 70s, and the paintings’ mesmerising photographic detail – the perfectly curled leaves, the crisp reflections in the bay windows – suggests the influence of the flourishing pop art movement of the time.

The ground floor gallery’s main room is a shock to the system compared with the polite detached realism seen thus far: at two metres high and up to seven metres across, the size alone of three enormous triptychs – Durrington Towers I (Triptych), 2007, A Triptych for Mark (1991) and Art 4 All (Triptych), 2016 – is enough to give us pause. Here, we see Hepher’s trademark style; painstakingly detailed and true-to-life paintings of concrete tower blocks, incorporating visual signs of urban decay. Graffiti tags, based on Hepher’s own observations, adorn the paintings in various colours, while the canvases themselves are primed with a mixture of concrete, PVA and wood to create the illusion of tower-block walls, on to which Hepher has applied paint to mimic the rivulets of slime that often stain concrete structures. These paintings aspire to be more than merely pictures of a landscape; they are attempts to realise the landscape on canvas in a highly physical and immediate sense.

This exhibition documents a gradual progression of Hepher’s painting into the realm of collage, repetition and abstraction. Works such as From Peckham to Athos (1998) and Winterreise (2009-10) show layers of paint and graffiti applied on to a photographic tower-block base, over which the artist has then superimposed traditional landscape images of the mountain monastery of Athos in the former and a pastoral winter scene in the latter. These “windows” into different locales and artistic styles are a playful reminder of the physical tower-block structures that make up Hepher’s landscapes, multilayered compositions carefully embellished with complex swoops of rainbow graffiti abstractions and tags of “MILLWALL”, “ABBA” or simply “Deb”.

Hepher’s 2007 Durrington Towers I (Triptych) is the most abstract composition on display here, a disorienting din of painted towers melting into concrete-canvas, upside down high rises and satellite dishes, on to which he has sprayed a latticework of child-like windows. These vibrant interlocking geometric details gesture towards the utopian colourful grids of Piet Mondrian and Le Corbusier, which are inevitably front-of-mind in an exhibition devoted to the tower block, yet, at the same time, are tied to the contemporary London setting in which Hepher found them.

Hepher has always been loth to wade into the complex social implications of the London concrete high rise. As he told the Guardian in 2015: “I’m sure that if I lived in the mountains, I would paint mountains.” To contemporary visitors, this reluctance can seem surprising, considering the acute issues of gentrification and displacement facing the predominantly working-class occupants of these towers. Hepher is a landscape painter above all else, and his chosen subject has enabled him over the course of decades to return with new styles, techniques and ideas. At a time when brutalist architecture is undergoing a considerable renaissance of public opinion, Grain of Concrete is an excellent overview of the work of an artist who has been captivated by these fast-fading leviathans all along.