With works from the 17th century to the present day, this impressive exhibition views the changing nature of London’s rich and varied architecture through the eyes of artists across the years 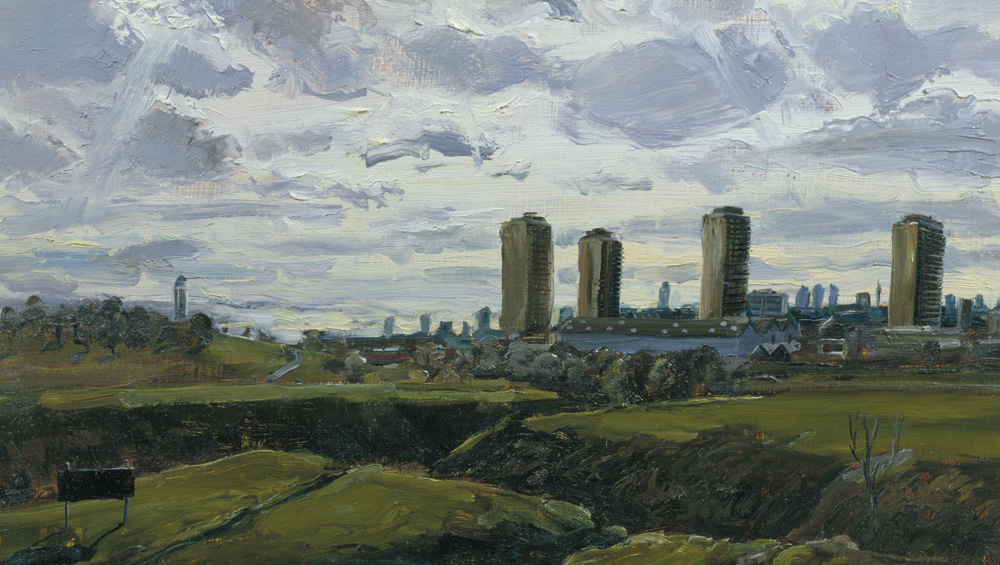 Architecture of London at the Guildhall Art Gallery brings together 80 works by more than 60 artists, mostly from the City of London Corporation’s art collection. The Guildhall, situated in one of the capital’s most architecturally rich areas, is itself a remarkable building, sitting on the remains of a Roman amphitheatre that was discovered by Museum of London archaeologists during a dig in 1988 in preparation for the new Art Gallery building project. In 2002, the doors to the amphitheatre opened for the first time in nearly 2,000 years.

Emerging from the nearby Bank underground station, one encounters some of the city’s finest buildings: the Bank of England, St Paul’s Cathedral and the more recent No 1 Poultry, designed by the architect James Stirling and completed in 1997, five years after his death. Like many notable postmodern buildings, the imagery is rich in references. 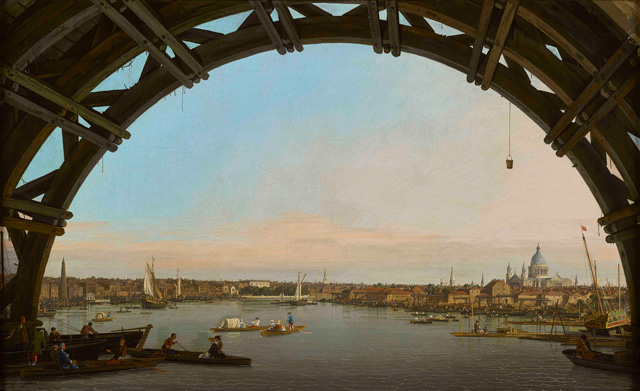 The Guildhall Art Gallery is a most appropriate venue for an exhibition devoted to London’s rich and varied architecture, seen through the eyes of artists. With works from John Gipkin to Canaletto, John Piper to Frank Auerbach, Leon Kossoff and Ben Johnson, this is a most impressive show. With the earliest dated works, Old St Paul’s Diptych (1616) by Gipkin and London Seen Through an Arch of Westminster Bridge (1747) by Canaletto, two works that are rarely exhibited, the show creates an immediate air of gravitas. Spanning 400 years of London’s changing landscape, streets and buildings, this exhibition, which also includes a wide range of recent works, explores the capital’s ever-evolving architecture and topography. It is arranged thematically: Changing Landscapes of London; Streets of London; and Closeups of London.

London cannot be characterised by a single architectural style and can indeed be seen to exist in a state of constant flux. Its history of architecture establishes a narrative punctuated by the turmoil of war and political and social change. On loan from The Society of Antiquaries of London, Old St Paul’s Diptych (three images including the cover) presents King James VI in procession from Southwark over London Bridge to the city, a rare view of Jacobean London, where the city is presented as a pious place to promote the proposed rebuilding of the cathedral. Here, the artist as propagandist creates a utopian view with biblical texts streaming from heaven: the proposed restoration of the cathedral is alluded to by the inclusion of ships on the Thames carrying timber and stone for the rebuild. In what was, in fact, the red-light district of the city, the artist has imposed churches.

The Great Fire of London inspired accurate portrayals, such as that attributed to Waggoner (c1666-1685). One of the few contemporaneous documents of the catastrophe, it conjures the devastating conflagration that swept through the central parts of the city from 2-6 September 1666. The fire destroyed about a third of the city, gutting the medieval city inside the old Roman city wall, and leaving 100,000 people homeless. The city took 50 years to rebuild: 87 out of 109 churches, including St Paul’s Cathedral, were destroyed, and only 51 churches and about 9,000 houses were rebuilt. The destruction of a city captured the imagination of numerous artists, creating images of witness and indignation.

During and after the second world war, the city inspired a range of responses, from straightforward literal depictions of rubble and ruin to apocalyptic visions. Émigré artists such as Auerbach, and Lucian Freud and Kossoff (born in London to émigrés from the Ukraine, who died last week aged 92) created profound images of the city that had offered them a home from the war-torn continent.

In the aftermath of the war, the rebuilding of the city was well documented by artists keen to create images of recreation as a force to counter the destruction. Images of London’s rising skyline, dominated by brutalist architecture, concrete and glass represented its continuous transformation. The force for renewal implied in the creative act saw a great many works of strength and optimism. In a particularly fine work by Piper, Christ Church, Newgate Street (1941), the artist shows the church gutted by incendiary bombs in the aftermath of the Blitz. As an official war artist in the second world war, Piper was sent to bombsites as soon as possible to capture the chaos and destruction. In this work, however, he creates a sombre image that resembles an ancient relic. Kossoff captures the sense of change and evolution in the city with Christ Church, Spitalfields No 2 (1991), one of a long series made between 1987 and 1992 of Nicholas Hawksmoor’s baroque church. He was drawn back to the same building over a period of 40 years, to capture the unchanging architectural form, surrounded by the new. In 1986, he explained: “The urgency that drives me to work is … the awareness that time is so short that soon the mass of this building will be dwarfed by more looming office blocks and overshadowed, the character of the subject will be lost for ever, for it is by its monumental flight into unimpeded space that we remember this building.”

Throughout the 20th century London’s streets were chosen by many artists who looked close to home for their subject matter. These are stories of human life told through images of suburbia, most often without human forms. As more intimate portrayals of London, many of the works in this part of the exhibition are views from the artists’ studio windows and use images of the fronts of houses and non-residential parts of the city to explore formal elements of their art. Images such as those of the Camden Town Group 1910-1913 to the School of London in the 1970s make up a significant part of the show. Spencer Frederick Gore’s From a Window in Cambrian Road, Richmond (1913) and Harry Bush’s Laggard Leaves (1921-25) allude to private lives. Gore’s painting shows the view from the top-floor window of the house to which the artist and his family had relocated in 1913. It is made with stylised forms where a visible grid underneath the thin paint indicates Gore’s process of painting from squared-up studies. It is thought to be his last painting before a premature death from pneumonia. In contrast, the etching Street Scene (1915-25), by Christopher Nevinson, shows the daily lives within the built environment where a child is crying or pulling a face, making the viewer feel a sense of voyeurism. 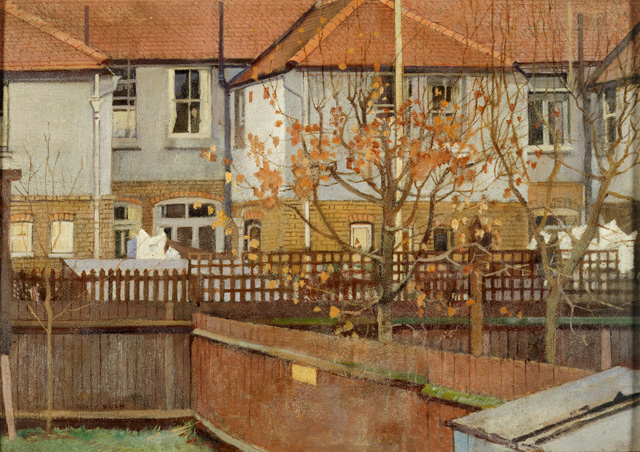 Uzo Egonu (1931-96) came to Britain from Nigeria in 1945, contributing a unique vision of the city of London, with many other émigré artists around that time. Combining traditional West African art with European modernism, he painted famous London landmarks, including St Paul’s Cathedral, Tower Bridge and Trafalgar Square (1968) on show in the Guildhall exhibition. Both Tower Bridge and Trafalgar Square possess abstracted but recognisable forms with a bird’s eye view that create an exuberant and frenetic spirit.

Since the 1970s, Ben Johnson’s work has been immediately recognisable and it is brilliant in its technical virtuosity. Two paintings of his stand out in this show: Looking Back to Richmond House (2011), his panoramic view painted while artist in residence at the National Gallery; and Market Arcade (1986). Although they possess a heightened realism, Johnson’s works are far from direct pictorial representations of specific buildings. Rather, he makes reconstructions, and in the case of Market Arcade, it is almost abstract, capturing the building’s innate rhythms and patterns. 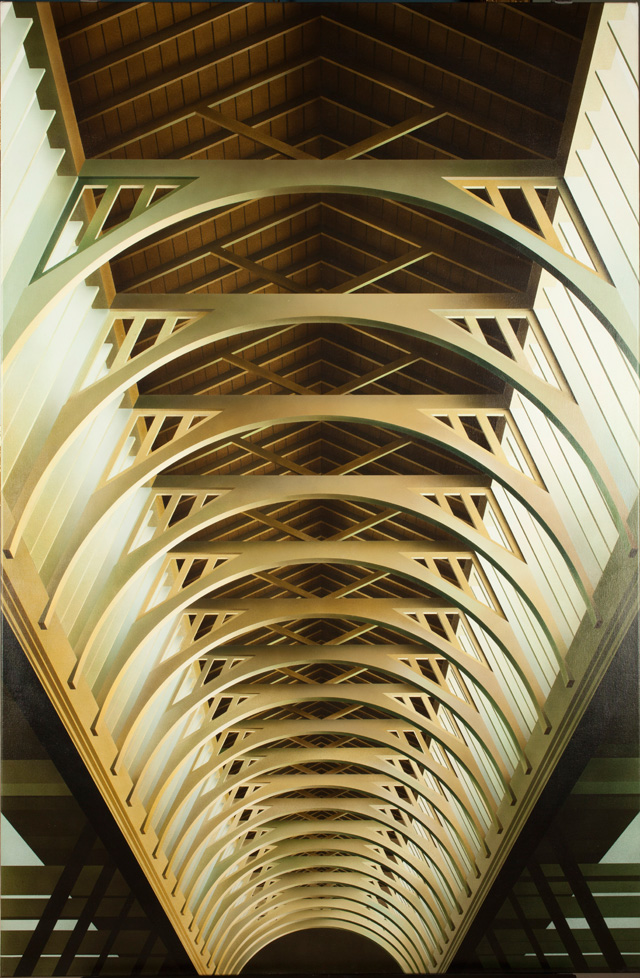 Market Arcade is based on the roof trusses of Smithfield meat market, where the ceiling beams echo the carcasses of the animals below. He described the powerful image as a “heroic structure”, saying: “Smithfield arcade related closely to a particular enthusiasm I have for British engineering and particularly the contributions of Paxton, Turner and Brunel.” Johnson’s 2011 panorama of London is a remarkable achievement and occupies a pivotal place in Architecture of London. At the first Venice Architecture Biennale, in 1991, Norman Foster portrayed his work solely through Johnson’s images and he included him again in his installation there in 2012. Johnson has for years been an honorary fellow of the Royal Institute of British Architects for his contribution to the public’s understanding of contemporary architecture. 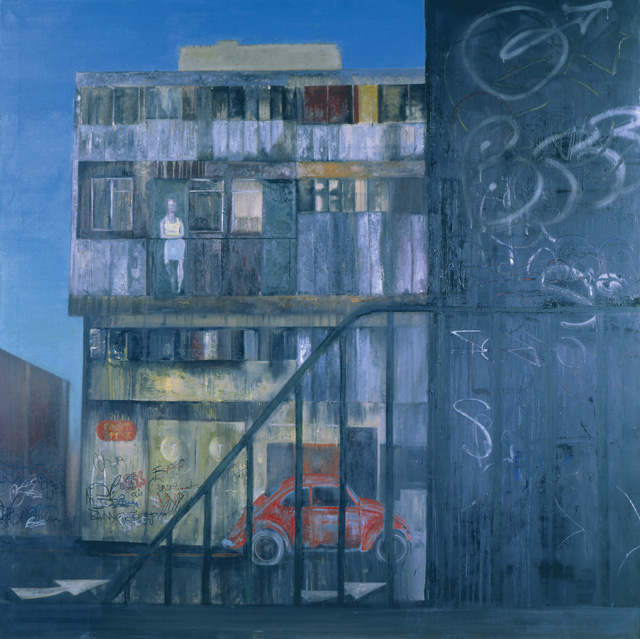 Jock McFadyen was born in Scotland in 1950 and moved to London in his early 20s. He has always been drawn to aspects of life that are raw or brutal as a conduit for the pathos and struggles of the inhabitants. Living in Bethnal Green in the east of the capital, he drew on the local area. His early works focused on figures in landscape, emphasising the damaged and fractured elements of the physical environment. Over time, his figures disappeared and he endowed the built environment with a mood to allude to the harsh life of its inhabitants. Roman (1992-93) is a block of flats on Roman Road, Bethnal Green, with a post office and shops at ground level. The artist introduced the concrete structure with railings for pictorial purposes while the graffiti he includes is an amalgamation of images from other places.

David Hepher’s Albany Flats (1977-79) reduces the tower block Bradenham, on the Aylesbury Estate in the London borough of Southwark, which was made up of 3,000 homes, to a vast patterned mass. One of the largest housing estates in Europe, it is currently being demolished and redeveloped. Hepher has chosen to portray housing for more than 40 years: “I have always painted houses, or housescapes … I only paint residential flats – they have a soul that glamorous office architecture doesn’t have.”

Architecture of London is an uplifting exhibition. The most affecting works represent personally charged responses to a prospective new home from artists within the United Kingdom who moved to London, a cultural centre and one of hope and promise. Most significant are works by artists who migrated to Britain to escape persecution. Reconciling their lost culture and personal trauma, they interrogate the city that afforded them refuge in the shadow of political history. A heartfelt commitment to a place of safety and democracy perhaps explains the poignancy of so many of the works. Against present day knife crime in London, the ramifications of the Windrush scandal, and Brexit one is left dismayed by the dichotomies of altruism and lost potential.