David Brian Smith: ‘My cause is to fight for the plight of the English countryside’

David Brian Smith: ‘My cause is to fight for the plight of the English countryside’

The painter’s pop-coloured vision of the English countryside belies a sad truth, but as Smith demonstrates, bitterness can be channelled into something meaningful 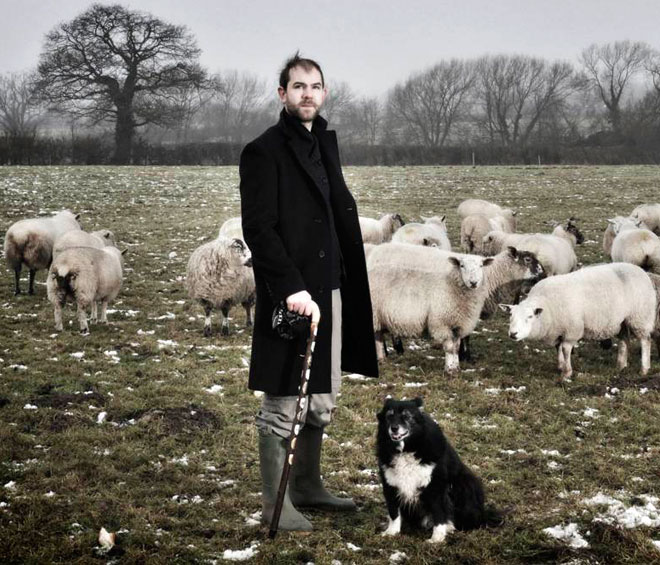 The paintings of David Brian Smith (b1981, Wolverhampton) offer a glimpse into an alternative world. The English countryside is transformed into a trippy patchwork of candy-coloured sheep and psychedelic skies. A bowed shepherd – a recurring motif that he has reworked almost obsessively – stands rooted to the spot, a sober, immovable figure in a world of madness. Smith’s paintings can be viewed, in part, as a response to the changing world that leaves his protagonists, be they shepherds or missionaries, isolated and lost in fizzing colours, emotionally and figuratively adrift in a landscape that is both recognisable and alien.

Smith’s artistic lineage is difficult to pin down and his influences are rooted as much in his own writing as they are in the works of other artists. There is (coincidentally) something of the surreal nature of Winifred Knight’s evocations of the Tuscan landscape, an echo of David Hockney’s palette, a touch of the unsettling nature of Peter Doig. But the painstaking processes that Smith has developed are all his own.

Emily Spicer: Your paintings are born from personal experience. Can you tell me how the shepherd came to be?

David Brian Smith: After my father passed away, my mum had to sell the farm in Shropshire where I grew up with my sister. She couldn’t afford to keep it going. When she moved to her new house, she took up the carpets in the living room and there were some newspapers pressing flowers. In one of those newspapers was a picture of a shepherd among a flock of sheep to commemorate the armistice. Underneath, it said: “My soul hath them in remembrance and is humbled in me,” which is an extract from the Bible.

I was obviously feeling really bad at the time because I was upset for [mum] having to make the transition from all that space and all those memories. And I was selling tractors and trailers on eBay; it was a very strange time. That’s the reason I started painting shepherds, and I had the confidence to repeat the image, knowing, thinking, assuming, believing that I would be able to interpret it in different ways. After the farm was sold, the buyer used it as a landfill site. My cause is to fight for the plight of the English countryside. I am very embittered about the whole thing at times.

ES: When I saw Great Expectations – A Windy Day (2015), it immediately reminded me of a biblical scene – a shepherd among a flock of sheep with his head bowed reverently in a landscape of palm trees. It looks to me like a depiction of Jerusalem or Bethlehem.

DBS: I have been asked if there is a religious spin on the work, and it can be quite confusing, I guess, especially if there is a line out of the Bible as a title of one of your paintings. I did show My Soul Hath Them in Remembrance and is Humbled in Me in America and I had a few emails from Christian magazines asking me if I could do interviews, but, to be honest, that’s not my angle. I went to a Church of England school, my mum’s a Christian. I am, too, I suppose, but it’s not something that is a motivation for my painting. In fact, the motivation for me is colour and material. I use a sketchbook to write in as opposed to sketch in. I write little poems and aphorisms and they appear on all of the paintings and get painted over most of the time.

ES: Why do you paint over them?

DBS: I think of a single letter as a gesture. If you have a word written down, if you have ice-cream written down, for instance, then obviously, when one looks at it, it’s a trigger, a signifier. I made a shepherd painting that was a commission piece for quite a high-end restaurant. In the sky, I’d written: “I early saw the terrible inconvenience of poverty.” That quote came from the guy who invented the Penny Black stamp. He made millions from it back in the day, and he was quoted as saying these words, and I thought, wow, that resounds with me, I feel like I can use that in my work. I wrote it again and again in the sky of this painting, but it was so brutal as a thing, you know, written 20 times with a shepherd with his head bowed.

ES: It maybe seemed a bit “on the head”.

ES: Maybe it’s good to remind people how lucky they are.

DBS: Yeah, absolutely, I agree, but I don’t know whether …

ES: It would put them off their tagliatelle …

DBS: Yeah! Their caviar! So then I just took letters out with gold leaf, or perhaps a painted cloud, birds, I can’t quite remember. So I guess that’s how I paint, really. I break things and I try to put them back together.

ES: Can you tell me about the origin of your anthill paintings?

DBS: My great-grandfather was a missionary in Bangalore. I found a picture in a family album of him sitting on top of a termite mound and it’s an amazing picture and it’s quite trippy. I’m in a Dancing Mood is probably in the top five of the paintings I’ve made.

ES: Where does the title come from?

DBS: It’s called that because I was painting it with a friend of mine – I often collaborate; friends of mine come over to the studio and I just put a brush in their hands. Anyway, we were doing some painting in the sky and we were listening to this reggae track called I’m in a Dancing Mood and that’s where the title came from.

ES: Is it helpful to have someone else painting on your canvas?

DBS: I love painting with other people. It’s fun – you know, painting should be fun.

ES: Do all of your paintings start from photographs?

DBS: Yes, I do use photographs as a starting point. Generally speaking, I think I’m drawn to quite simple compositions. For me, when paintings are really successful, they have this uncompromising unification, where I go, OK, everything is just locked together.

ES: I want to ask about your technique using the herringbone weave of the canvas to produce the zigzag patterns on the surface of the image …

DBS: Every other line of the canvas is painted a very dark colour.

ES: So you’ve taken a paintbrush and followed the weave?

DBS: Yes, it takes a month. You can do about eight lines in a day. When the painting is really strong, I sit down for a month and paint every other line of the linen and, obviously, you’ve got to go with the weave. When you’ve stretched the canvases – I stretch my own – there will be different tensions in it and the weave will have a flow, and following that flow can be a bit challenging. If the [stretched weave] was in a straight line, then it would be much easier.

ES: And those imperfections don’t bother you?

DBS: When you see them from a distance, you can’t see the lines at all. The whole image just comes together.

DBS: Very much so. In fact, what first inspired me to paint every other line was Missoni, the Italian fashion house. I’m not massively into fashion, but I’ve always admired Missoni for some reason. I guess it’s the history of it. Maybe I like it because it’s such a simple thing to be known for ­– you know, it’s like we own the zigzag! For me, it was about bringing the herringbone weave, that material, back to the surface at the end, reminding the viewer of the material.

ES: Apart from your admiration for Missoni, does this interest with fabric also come from your background in farming sheep?

ES: You’ve said that you are not a surrealist or an op art painter, that you don’t want to be pigeonholed and that you see yourself as being a bit of a black sheep. But you identify with landscape painting. Do you see yourself as part of the tradition that rose out of the industrial revolution as people moved to the cities and began to long for the green fields again? A bit like you moving from rural Shropshire to Hackney in east London.

ES: Or even earlier. Do you see yourself as part of that lineage?

I always felt uncomfortable when I was on my undergraduate course and we were asked to place ourselves within contemporary art. I find that a really premature question to place on people, the majority of whom aren’t even going to continue making art. And I can’t blame them. I understand – it’s not easy. But I also knew that it was the thing that I wanted to do. I suppose I’m not a complete maverick, but I’m influenced by my friends whom I met at college or other artists that I know and we talk about art and that’s where it comes from really. But I suppose if one was going ask about my influences, then Peter Doig has been mentioned before and William Blake.

ES: Because of Blake’s connection with the written word?

DBS: I think so, and I think that Blake is probably quite a good person to mention in the sense that he was a bit of an outsider as well.

ES: What are you going to tackle next?

DBS: I want to make a print. This Thursday, I’m going to see a printer and I’m going to begin to learn about the lithographic printing processes. And I hope, at some point, I will be able to make a print and it will be of a shepherd. I want it to bring a little closure. And I’d like to make more of those honest, simple decisions. I’d like to just come in to my studio, close my eyes and push colour around and see what happens.

DBS: Very much so. Let the emotional overtake the cognitive and let those two entities overtake the business brain. I’m right at the beginning of things here, and I’ve got some things sketched out, things that I would like to make paintings of. 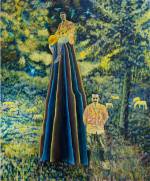 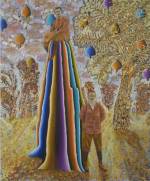 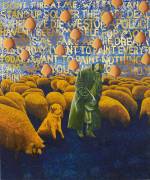 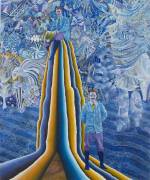