From glass whoopee cushions to a vast US flag to cartoon characters, Colen’s works, which use everything from chewing gum to cigarette butts and plastic bottles, are ambitious in scale, colourful, bombastic and highly varied 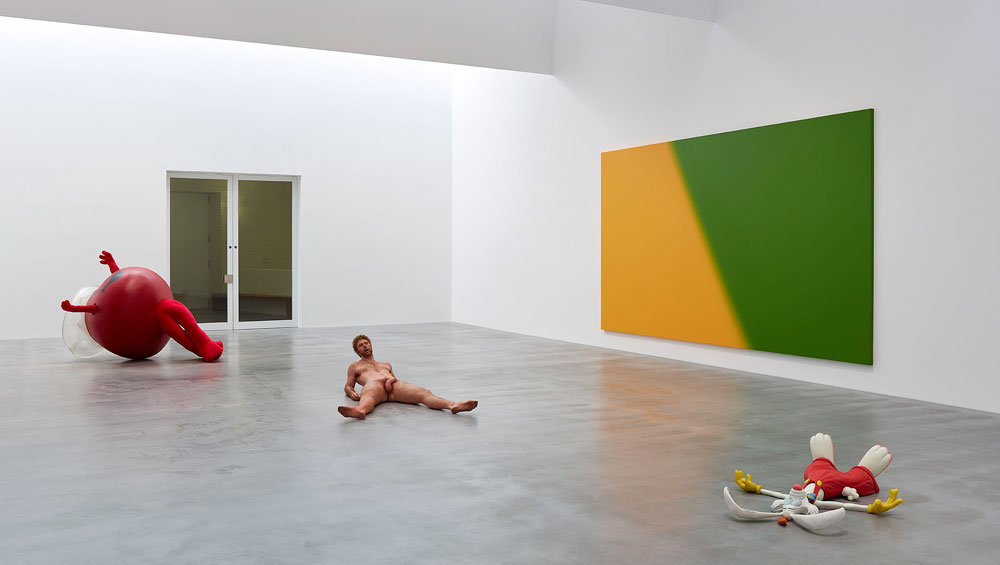 Bubblegum canvases, glass whoopee cushions and a life-sized Wile E Coyote: Dan Colen is an all-American artist. Sweet Liberty at Newport Street Gallery, Colen’s first major solo exhibition in London, chronicles the past 16 years of his artistic practice, a period bookended by the fall of the World Trade Center and the rise of Donald Trump. On show is a generous selection of Colen’s bold, playful, in-your-face artworks, showcasing his dexterity with different styles and media – photorealistic and abstract painting, word art, sculpture – and his abiding preoccupations with found materials, pop-culture ephemera and the search for where “true art” happens. 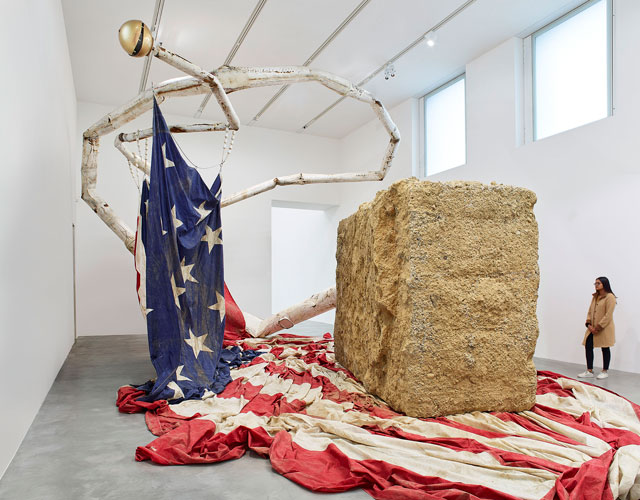 Colen announces himself boisterously with The Big Kahuna (2010-17), an enormous, crumpled American flag, complete with 50-foot flagpole and 20-tonne block of concrete pinning the fabric of the sacred national icon to the ground. The work’s massive, contorted form is impressive to behold, dominating the generous gallery space. It readily evokes widely circulated images of dusty flags pulled from the Ground Zero rubble, and in the wake of the ongoing spectacle of the Trump presidency, political readings are within easy grasp. 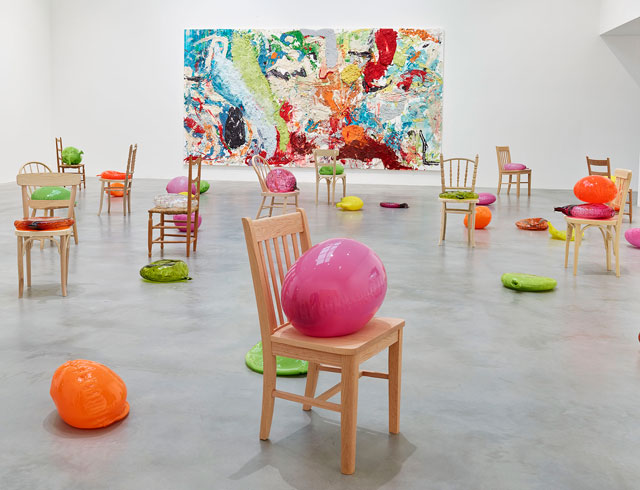 However, for Colen the artwork has more personal origins. Born in 1979 in New Jersey, Colen studied at Rhode Island School of Design before moving to New York City at the turn of the century. He became embedded in a thriving downtown Manhattan art scene, appearing with two friends, Ryan McGinley and Dash Snow, on the cover of New York Magazine in 2007 where they were proclaimed “Warhol’s Children”. Colen and his fellow enfants terribles lived a debauched lifestyle of drugs, parties and prolific artistic output, brought to a close by Dash Snow’s death from an overdose in 2009, aged 27. Following this tragedy, Colen sobered up and left the city, buying a farm in upstate New York. It is against this backdrop that The Big Kahuna was conceived, a self-portrait, according to the artist, a “battered thing recovering from multiple traumas”. 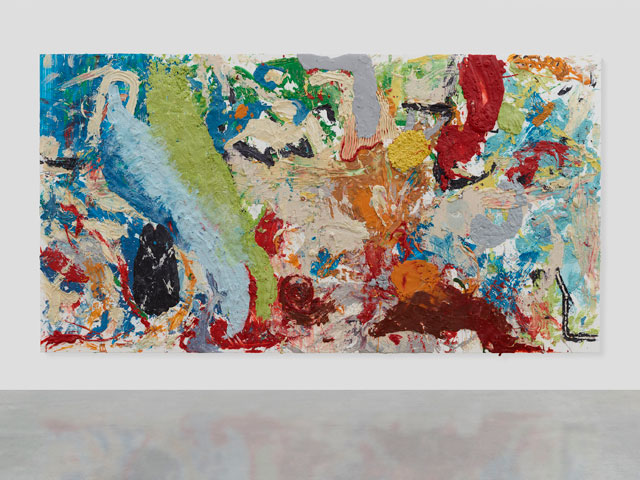 The majority of the work on show at Newport Street Gallery is from this more recent stage of Colen’s career, though many are late instalments in long-running series. Colen is particularly known for his bubblegum and trash paintings, where he transposes arte povera ideas into urban settings using discarded emphemera such as chewing gum, confetti or bird droppings. Pop My Cherry! (2010) is representative of this aspect of Colen’s practice: individual chewed pieces of multicoloured gum are stuck, closely packed, on to the canvas, drawing out conflicting sensations of disgust and fascination from the viewer. Pop My Cherry! shares a gallery with Improv (2014-17), a collection of multicoloured glass whoopee cushions placed on chairs and scattered across the floor. Picking your way through this candy-cane minefield of blown glass, you would be forgiven for recalling Rachel Whiteread’s plaster and resin hot-water bottles on show across the river at Tate Britain. Colen’s main addition to the conversation is a wry sense of the slapstick – these glass whoopie cushions are unable to perform their sole function. 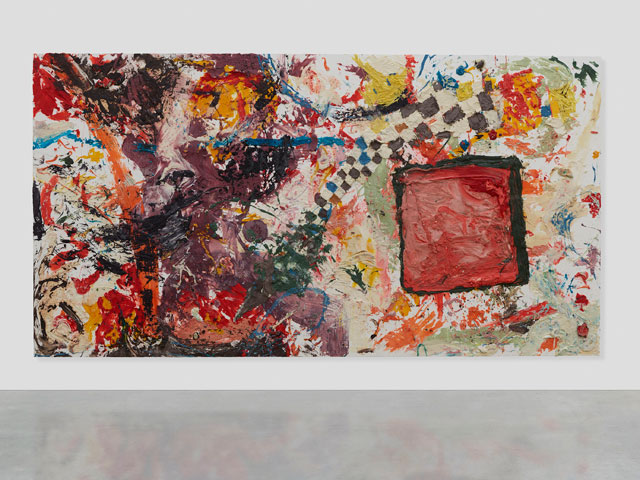 Colen’s more recent work with gum strikes out in a new direction: in All Mops and Brooms and Marbles in My Mouth (both 2015), vast quantities of gum have been melted into a sludge-like paste to daub the vast, panoramic canvases. The end result is an enthrallingly lurid mess from which shapes and objects struggle to emerge: Colen has combined the bold visual language of action painting with a pop artist’s attraction to everyday commercialised objects, but it is difficult to extract a compelling statement from the ooze. 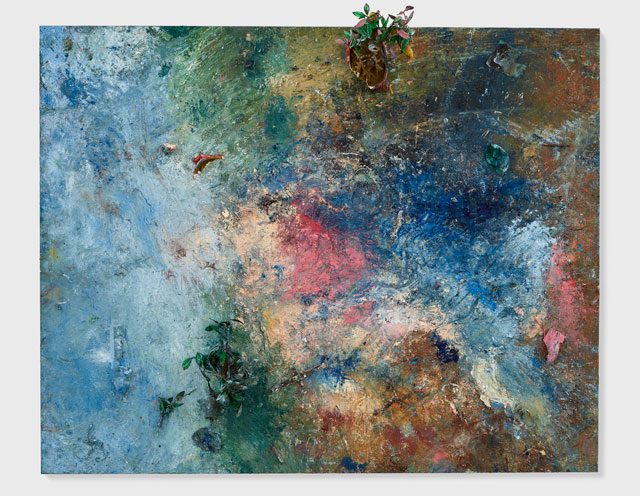 Oh Madonna! and Mama Mia! (both 2016), from Colen’s Trash series, take their compositional cues from Raphael’s Madonna and Child paintings, rotated into landscape orientation. Viewed from afar, one can easily pick up the blues of the sky and the drapery, the green of the surrounding landscape and the bright coral of the Virgin Mary’s dress, but in the approach the canvases become Rauschenberg-esque, a mulch of oil paint and trash recovered from city streets – plastic bottles, boots and potted plants – protruding from the canvas, as well as the imprints of boots and cans in the thick paint. These works are ambitious in scale and reward close viewing, their double identity as Old Master emulation and urban trash-scape uniting aspects of high and low culture, divine permanence and throwaway convenience. 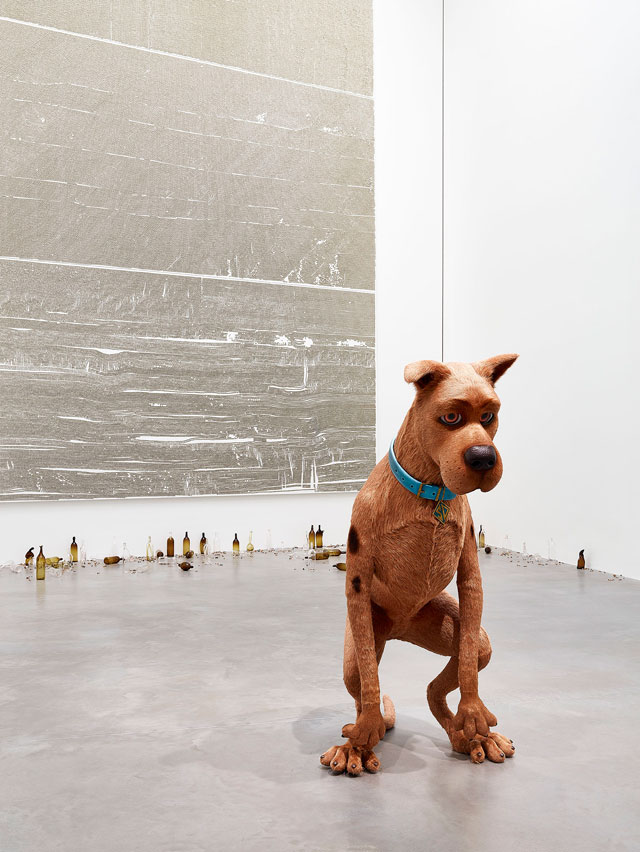 Elsewhere, Colen adopts a more pop art posture, with several models of cartoon characters collapsed in various states of exhaustion. Haiku (2015-17) is a “life-size” model of Scooby-Doo as he appeared in the 2002 live action film. And in The Long Count (Sisco) (2017), the dog sways drunkenly, placed in front of misshapen beer bottles and cigarette butts. The work, a physical model of a computer-generated imagery reimagining of a cartoon character, plays with multiple layers of figuration, this conceptual disorientation contributing to the bizarre comedy of the whole arrangement. 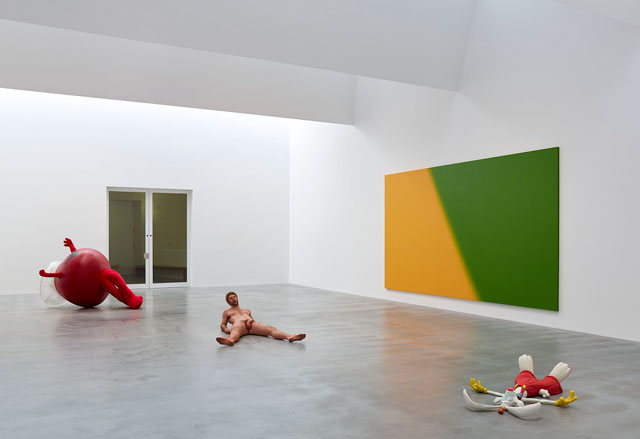 In Livin and Dyin (2012-13), Wile E Coyote, Roger Rabbit and Kool-Aid Man are joined by a life-sized naked model of Colen himself spread across the final two rooms of the exhibition, the characters having quite literally crashed through the gallery. Each permanent interior wall of the building has been cartoonishly cut through – brick, plaster and all – by an amalgamated outline of the chaotic quartet. How this was achieved is a mystery – the holes are cut laser-like to the precision of individual fingers – but the punctures, as well as being a fun visual gag, create a sense of flow and narrative through what is otherwise a disparate collection of works, drawing visitors through rooms and past artworks in dialogue with each other through the slapstick ruptures.

The art on display at Sweet Liberty is colourful, bombastic and highly varied, a testament to the creative energy and drive of an artist at a still relatively early point in his career. But it is puzzling, too – there is little thematic cohesion, and while it is easy to seize on Colen’s artistic and cultural references, the substance of his own ideas is more slippery. It is perhaps fitting that the exhibition closes with Shoes (2013-17), a pair of restless shoes tap dancing on the ceiling to an unheard rhythm: with striking and assured execution and heavy on the visual gags, Sweet Liberty leaves one wanting more, but unsure of the direction of travel.