The highly idyllic nature of the Romantic tradition in philosophy, art, music, literature and theatre born during the late eighteenth and early nineteenth centuries as a reaction to the failed promises of eighteenth-century Enlightenment and neo-classical values might seem at odds with challenges facing contemporary artists seeking to impact post-9/11 global culture. Below the surface of time and place, Romanticism's core values have continued to inform and inspire the arts to the present day. On view at the Grey Art Gallery at New York University in New York and the Parrish Art Museum in Southampton, Long Island, Damaged Romanticism: A Mirror of Modern Emotion explores the connection between first-generation Romantics and those working with the tradition today. In her introduction to the catalogue, exhibit curator and Parrish Art Museum Director Terrie Sultan says that recent attempts to bridge early and contemporary Romantics have presented alternate world views to escalating social, economic and political challenges, or focused on the darkest sides of material wealth and scientific progress. For Damaged Romanticism, Sultan assembled works that fall into neither category but aim for open-ended dialogue leading to catharsis, redemption through recognition, possibly acceptance and, perhaps, even hope.1

The catalogue consists of an introduction by Sultan relating the exhibit's development and locating the place of each participating artist in its scheme; an essay by art critic David Pagel, associate professor of art theory and history at Claremont Graduate University, linking contemporary Romantic artists and their predecessors; a consideration of films in the Romantic tradition, including film noir classics of the past, Wim Wenders and Peter Handke's Wings of Desire (1987), Sofia Coppola's Lost in Translation (2003) and Wong Kar-wai's In the Mood for Love (2000) by Colin Gardner, professor of Critical Theory and Integrative Studies at the University of California, Santa Barbara; a short story by Nick Flynn, assistant professor in the Creative Writing Program at the University of Houston and author of the PEN/Martha Albrand Award-winning Bullshit Night in Suck City (2004); and illustrated sections on each artist, with text by catalogue contributors.

By emphasizing logic, reason, harmony and proportion, Enlightenment thinkers helped to reduce the power of church and crown, yet the French Revolution proved that democracy, as an abstract concept, could erode individual integrity; nor did it develop essential Romantic values of emotion, imagination, creativity and time to explore and enjoy the natural world. Like their predecessors, the 15 artists represented in Damaged Romanticism seek to preserve their independence, intellectual and artistic freedom and honest self-expression.2 And like the changes leading to the industrial revolution that disillusioned first-generation Romantics, upheavals experienced globally since the 1960s and escalating exponentially after 1990 have mocked social expectations for safety, stability and economic progress; drained enthusiasm for the future; and left people from all backgrounds and cultures fearful, confused, angry and alienated.

The first Romantics believed that, being true to themselves meant disengaging from an increasingly commercial, urban and mechanized society. Turning inward, they embraced hidden sides of life abhorred by Enlightenment thinkers. Romantics were not afraid of complexity, emotion or the dark spectres likely to be conjured from a roaming imagination. Compromise in the short term, they felt, would result, ultimately, in failure. In nature, they found powerful, even frightening but vital vistas as antidotes to despair. In the twenty-first century, the most pressing questions, more urgent than solving dire economic, political and social problems, echo on a much larger scale those fueling the Romantic movement. Yet, as Sultan and her colleagues point out in the catalogue, contemporary Romantics remain connected by whatever means they can create. They are committed to examining the damage, salvaging its lessons and expressing their personal truth.

In his catalogue essay, Pagel explains:

'Cosmic mystery, sublime wonder and infinite possibility were dear to the hearts of the original romantics, whose souls and emotions expanded to include the psychologically charged landscapes they found in nature, which was, for them, a rejuvenating escape from the dispiriting meanness and claustrophobia of city life – and an often terrifying opening onto the infinite, inhuman vastness of the cosmos. Their focus on see-for-yourself subjectivity established individualism, bohemianism, independent thinking, emotional intensity, skepticism, unfettered creativity and faith in the imagination as art's – and life's – essentials'.3

Pioneered in the visual arts by JMW Turner, John Constable and William Blake in England, Francisco Goya in Spain, Caspar David Friedrich in Germany and Théodore Géricault and Eugène Delacroix in France, the Romantic vision and its values–along with a generous dose of individualism from 19th-century American transcendentalists (Emerson, Thoreau, Whitman, James) – have sustained future generations of artists in various ways. For example, during the 1950s, the Beat Generation writers and artists found themselves at an impass. Rejecting the limiting strictures of the past but finding little of value in mass culture to sustain the inner being, the Beats were left to formulate idiosyncratic solutions from their own creative resources. They believed that salvation rested in personal experience and unique expressions of that experience. Today, Romantics continue in this more mature, humble and human vein. For them, compromise is not failure; it is a given in any life-sustaining course of action.

The ability to engage with the world as a survival mechanism is just one departure from Romantics of the past. Although disappointed even to the point of despair, early Romantics could envision a future, however distant, when generations would look back favorably on their creed and works. For Damaged Romantics, envisioning a far distant future is a luxury no longer available. With the threat of nuclear weaponry, natural disasters, ecological devastation and economic collapse, their gaze is focused on what is before their eyes or a few steps ahead. Unable to predict what might happen, they perceive that the worst is yet to come. Their only weapon against such mighty forces is the artistic process. At this critical juncture in human evolution, it is not surprising that Damaged Romantics defy categorisation. Certainly, desperate times call for desperate measures, and the range of creative responses in this exhibit is impressive. Works by painters Edward Burtynsky, David Schnell, Julia Oschatz and Florian Maier-Aichen recall the great Romantic tradition of landscape painting, as well as neo-classical harmony and proportion, but upon closer inspection witness the deadly results of environmental trauma. In Burtynsky's elegantly composed paintings, for example, destruction comes as an added shock as a result of surface beauty. Others like Petah Coyne, partners Ryan Taber and Cheyenne Weaver, Wangechi Mutu and Mary McCleary reference ancient, historical and personal narratives in their mixed-media works. And skillful verbal and non-verbal storytelling animates the photographs of Sophie Calle and Richard Billingham, and Anneè Olofsson multimedia presentations.

The subject of a recent one-person show at the Brooklyn Museum, Jesper Just spotlights manipulates sexual identity, gender roles and stereotypes.4 He subverts prevailing ideas of 'male' by inserting completely unexpected narrative twists in his stories and employs the common language of popular music to forge connections between artist, action and viewer. For example, in 'No Man Is an Island II' from 2004, a color DVCAM with sound, strangers in a traditionally male environment – a dark bar room – join to perform Roy Orbison's 'Crying'. Drowning sorrows in a bar is, of course, an acceptable form of male release; expressing and bonding in Jest's construction is far more effective. The surprise of his lighter touch initiates catharsis.

Opposition is essential to Petah Coyne's works. In them, she confronts them all: male and female, beautiful and ugly, physical and spiritual, life and death, growth and decay, order and chaos, organic and man-made, etc. Her real talent consists of unearthing beauty in the most unlikely places. For instance, in 'Untitled #1103 (Daphne)' from 2002–2003, Coyne drew on the Greek myth of Daphne and Apollo to show a women struggling for independence amidst aggression and coersion. Coyne formed the sculpture from wax statuary with human and horse hair, ribbons, pigment, black spray paint, fabricated rubber, wire tree branches, curly willow, chicken-wire fencing, wire, acrylic, primer, silk flowers, bows, acetate ribbons, feathers, plywood, metal hardware, pearl-headed hat pins and tassels. Sultan calls Coyne's Daphne 'both beauty and beast' and describes Daphne's cyclical de-composition and phoenix-like resurrection:

'Daphne rises from the floor out of a thick mass of blood-red and painted black flowers covered in sticky black wax that culminates in a crown of willowy curlicues and open filigree. The dense thicket of this massive base is barely penetrable; the red of the roses mostly obscured by oil black while the pinnacle breaks apart into an airier but no less threatening crown. She...is surrounded by individual flowers scattered in a wide circle around her, like fallen laurel leaves, or rather, like miniature acolytes trailing their queen'.5

Angelo Filomeno's exquisitely crafted embroideries also draw on the past, specifically the medieval and Renaissance periods. The son of a blacksmith and a dressmaker, Filomeno served as apprentice to a tailor in his native Ostuni, a rural village in southern Italy. Using such luxurious materials as gold, gold leaf, silk lame, linen, crystals and diamonds, Filomeno is an alchemist, mixing the sumptuous with icons of death and destruction (skeletons figure prominently). In 'Coat of Arms with a Skull (after Albrecht Dürer engraving)' from 2006, for example, Filomeno embroidered his vision of war and its aftermath on silk shantung stretched over linen with crystals and quartz. Infused with the spirit of the fifteenth-century German painter and printmaker, this work connects Filomeno with Dürer and other Renaissance artists while referencing his own personal history in craft.6

Also rooted in personal history, Année Olofsson's videos and series of photographs reflect deep existentialist concerns common to humanity. A moving testimony to familial bonds, 'The Conversations, Island Life – the Mother' from 2006 (C-print mounted on aluminum with speaker behind the photo) shows Olofsson as voyeur, a role played by everyone who stands before the floral wallpaper representing paradise. As her mother's voice, soft sounds from nature, and love songs (sung by Charles Aznavour, who Olofsson frequently heard in her childhood home) emerge from the behind the wallpaper, the artist eavesdrops on her mother's loneliness. At once an entirely private emotion and a universal condition, this loneliness becomes, paradoxically, a connection to others, a relief from isolation and a way for Olofsson to understand a parent.7

The works collected in Damaged Romanticism are as difficult as most open-ended conversations. With its uncompromising stance and clearly articulated code, first-generation Romanticism had limited, if lasting, effects. Today's Romantics and their works open greater vistas than even nature held for Turner, Friedrich and their colleagues. Despite the evidence and the odds, contemporary Romantics have not given up on the world. Fearlessly, they portray the world as they know it, in many cases damaged beyond recognition. They do not hide their disappointment; in fact, many immerse viewers in personal stories revealing their own alienation. Times are, indeed, desperate, but they refuse defeat. Perhaps this, more than any other difference, sets them apart from first-generation Romantics and gives their art a power with which to be reckoned. 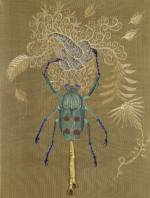 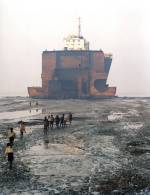 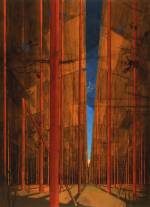