Cybernetic Serendipity exhibition was the demonstration of machine-aided creative processes


The main theme of the Cybernetic Serendipity exhibition* was the demonstration of machine-aided creative processes. In the course of this demonstration it became clear that we have preconceived notions about areas of activity and the people who engage in them, which are not only arbitrary but often simply untrue. We assume, for instance, that creative pursuits are the prerogative of people called artists and it is difficult for us to conceive of creative activity which does not result in art (or what we recognize as art today) and which moreover is done by people like engineers, chemists and philosophers. By examining some of the creative processes which employ computers and other cybernetic devices, we are immediately confronted with an entirely different set of people than those whose work normally fills the art galleries. The Cybernetic Serendipity exhibition incidentally involved 130 contributors, of whom 43 were composers, artists and poets, and 87 were engineers, doctors, computer scientists and philosophers.

The main substance of the Cybernetic Serendipity exhibition was information—the exhibits themselves consisting of objects, diagrams, films, and sounds, acting as illustrations of the various principles and ideas of which the information consisted. It just so happened that the objects which demonstrated these ideas were often so attractive or simply so absorbing in their own right, that neither the audience nor the critics found it always necessary to venture into the layers of information and explanation which were provided. The fact that the exhibition was approachable on a number of levels was most fortunate because it meant that it could be enjoyed by the layman without simultaneously seeming offensively simplistic to the experts. Since no claims were made that the various manifestations aimed at art, there was virtually no discussion as to whether this was or was not an art exhibition. Surprisingly many adults and certainly all children found the question 'Is it art or not?' irrelevant.

In retrospect and on the basis of this experience it seems that however esoteric an idea may be, providing that it avoids the rigid classification of art or science, or technology, or psychology, and their various subdivisions, the audience drawn will represent an entire cross section of people. Cybernetic Serendipity had visitors of all ages, all types, all nationalities, all classes, and the free entry for children under 12 and old age pensioners enabled us to realize what a vast and enthusiastic audience there is among the very young and the very old. The ICA had more than 60,000 visitors during the eleven weeks of the exhibition.

The installation of this show and the attendant problems are worth mentioning briefly. The complications involved demanded an ingenuity rarely called for it the arrangement of the more usual art exhibitions. Whereas normally one is concerned with the aesthetic arrangement, or even a meaningful arrangement of objects, here one was dealing with works some of which were sensitive to light or sensitive to sound and which accordingly had to be placed in the sort of surroundings which would enable them to remain operational. The degree of ambient noise was responsible for the breakdown of at least one machine, and the necessity for dim lights caused several visitors to trip over. Each contributor firmly declared the wish for privacy for his particular work, and the installation became more like making seating arrangements for a number of difficult guests at a dinner table, than the normal process of hanging or arranging an exhibition, which after all had a single aim-that of presenting works engendered by technology. The fact that the machines had to live together in one area prevented many from working at 100% efficiency. Sound was the most difficult element to control, and music was the most difficult material to exhibit. Whereas every graphic, film, poem and machine was presented in its totality, all musical compositions had to be represented by a small fragment of no more than a few minutes, duration. Also, since many of the visual scores were indistinguishable from the graphics in the exhibition, it was necessary to divide all visual material into strict categories.

Both the exhibition and the lectures which dealt with the main theme of Cybernetic Serendipity were designed to dispel some of those prejudices which cause many intelligent people to believe that the computer is a threat to those whose intellectual abilities and creative powers may no longer be in demand as their role is gradually taken over by the artificial intelligence machines. The exhibition demonstrated the possibilities and limitations inherent in the uses of computers, and if it were not for the unfortunate sensationalism of some reports on the radio which talked specifically about 'art created by computers', it might have been obvious to even more people that computers don't create anything themselves, and that whatever computer graphics, music and films are made, come about with the aid of computers through the very deliberate intervention of individuals. In rather the same way that we don't hold the typewriter responsible for the manuscript which is typed on it, the computer hasn't, so far at least, created anything either.

Since the exhibition fell between the two stools of art and science, it was covered by art journals, scientific journals and, in the daily press, by news, art, and science correspondents. The general consensus of opinion was that as a venture Cybernetic Serendipity was well worth while, that it was significant, and that it was enjoyable. The amount of editorial space devoted to the exhibition was exceptionally large, but surprisingly enough the longest individual articles appeared in the German newspapers. The exhibition's press cuttings book is like an exercise in co-existence, where well-known names in the field of science are stuck next to those of art critics, educationalists, anarchists, and gossip columnists. Generally the reports were both conscientious and imaginative.

One of the main areas of misunderstanding involved the confusion about whether the act of audience participation was supposed to be creative in itself, and if this participation was creative should it not produce art as an end product. To me creativity does not necessarily result in art or music or poetry, and participation has very little to do with creativity but a great deal to do with enjoyment. If the element of participation is rare in exhibitions generally, it is because the wear and tear is so considerable that the works will quite obviously never be the same again. I shall never forget Agam's first exhibition in London at the Drian Galleries, where the only people allowed to play with his transformable paintings were collectors and critics. Very unfair and very understandable.

'What computers do is help people to respond to things': this comment by John Gormley of The Tablet was extremely relevant. In the context of the exhibition the computer is seen as a neutral tool, so much so that only man's intentional endeavour brings about some result. Not only the computers that had to be programmed, but also the machines which functioned solely through the stimulation of the spectator's presence. Until something occurs physically within the machine's orbit, it is not fully operational. The audience in turn begin to respond to the sound and light of the moving mechanisms which they have unwittingly stimulated.

The Eastern Daily Press made one of the more widely repeated comments '...the show is guaranteed to keep children interested, and it is much more likely to be the adults who will be worried by it.' This was perfectly true, children rampaged in the exhibition for hours on end, but it was almost impossible to find out from any of them what it was that they liked or did not like in particular. I suspect that it was the ambience of activity rather than anything specific that they found attractive. To elicit response from the various machines children screamed and danced, followed in turn by many of the adults. Surprisingly enough in the spherical domes where computer music was playing, comparative peace reigned despite the exuberant, demonstrations outside.

The extreme views were represented by the vindications of Arthur Moyse in Freedom Anarchists Weekly who dismissed Cybernetic Serendipity and Scientology in the same breath, and a doubtful if surprising accolade was accorded to the exhibition (or at least its title) by the arrival of a new fashion boutique in Chelsea called Cybernetic Serendipity. The overwhelmingly enthusiastic response of the public contributed one of the most pleasant surprises and it was with some dismay that I heard from several foreign visitors that the same venture in Paris would have needed police protection.

Two main themes emerge as the reasons for the obvious significance of the exhibition at this particular time. The first has a great deal to do with the context in which it is seen. As far as the art world is concerned, it arrived on the scene at a time when the sheer frequency of new 'isms' during the past ten years has left marks of exhaustion. Michael Shepherd wrote in the Sunday Telegraph: 'What this exhibition also serves to show up is a desolation to be seen in art generally—that we haven't the faintest idea these days what art is for or about.' This very same problem is reflected also in the sadness of the Venice Biennale, and the wave of dissatisfaction among staff and students of art colleges. Art as a concept is less graspable than it had been up to the dissolution of the abstract expressionist movement—it is more exciting perhaps, more adventurous, but certainly less finite. At EAT in New York anyone who comes to ask for technological advice or assistance and who calls himself an artist is accepted as an artist; the fact that he may never have produced a single piece of art which would be acceptable to any of our cultural clearing houses in Europe or America has nothing to do with it. Somehow we have accepted that art can mean doing one's 'own thing', which can be anything at all, and this marvellous freedom has created its own problems. The exhibition has diverted a great deal of interest into an area which is finite, which has very specific parameters and aims, and which does provide stimulating material, albeit not art.

The technological world of Cybernetic Serendipity was far from frightening. It was more human for instance than the recent display of minimal art at the Hague, where black cubes, the size of small buildings, filled a space not unsimilar to a ready-made deserted city. Also, the frequent and persistent mechanical and electronic idiosyncracies of the machines which kept a team of young men in attendance all the time, must have reassured many of those who assume perfection and inscrutability in technology. As for man's supremacy over the computer, this was also demonstrated repeatedly throughout the show. The computer does only what you tell it to do and nothing else. Unfortunately if you programme a series of pictures which are essentially dull there is simply no possibility that they might turn out to be interesting. The randomness achieved by spilling the contents of a bottle of ink, has greater possibilities of improving a picture than the use of the random number generator in a computer. What is disturbing about all this is that the visual, poetic, and musical output of the computer represents the intentions of the man who programmed it with absolute accuracy. It is not surprising that the series of deformations of Leonardo's interpretation of Vitrivius' theory of proportion are visually more satisfying and interesting and altogether more surprising than the results of the same process of deformation applied to an indifferent drawing. In the end it all depends on the material one starts with and its potential.


*The exhibition, held at the I.C.A., London, closed at the end of October. It was reviewed in the September issue of Studio International. 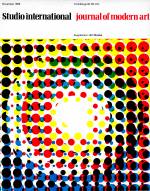 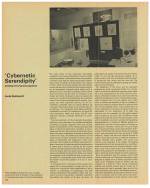 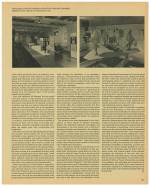