A pivotal period of John Constable’s life was spent in Brighton, where he would repeat three favourite walks, making sequential sketches, often intended as visual notes for larger paintings, but many quite exquisite as works in their own right 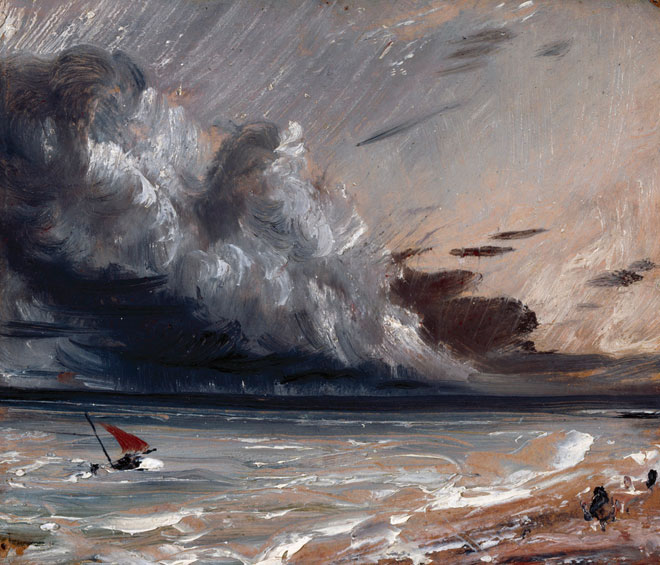 When the painter and curator Peter Harrap moved to Brighton in 2010, he had just finished working on the Royal Academy of Arts’ exhibition No New Thing Under The Sun. A key work that he had been responsible for including in this exhibition was the sketchy, expressionist, and quite remarkable for an artist associated with finished arcadian scenes, Rainstorm over the Sea (c1824-28) by John Constable (1776-1837). It came as something of a surprise, then, when local history researcher and new neighbour Shân Lancaster came knocking at his door to let him in on her supposition that Constable himself has lodged at this very address – then 9 Sober’s Gardens, now 11 Sillwood Road – on a number of his stays in the popular seaside resort: between 1824-28, Constable regularly returned with family, in an attempt to aid his ailing wife’s health (she was suffering from tuberculosis).

Intrigued, Harrap joined Lancaster on a mission to prove that this had indeed been Constable’s address. After much trawling through local directories, property deeds and Constable family correspondence of the period, they came across an uncatalogued letter in the Tate Archive addressed to Mrs Constable at this very address. In 2013, Richard Constable, the great-great-grandson of the artist, unveiled a blue plaque on the house. Sadly, having died in 2015, he is no longer around to enjoy this enlightening, thoroughly researched and scholarly significant exhibition co-curated by Harrap, showcasing more than 60 sketches, drawings and paintings made by Constable during those years, many in the “painting room” he created at Sober’s Gardens – now Harrap’s own studio – at the time doubling up as a bedroom for the cook, Mrs Inskip.

The exhibition is structured around three walks that Constable would regularly make: westwards towards Shoreham Bay, northwards towards Devil’s Dyke, and eastwards to the Chain Pier. Largely eschewing the town centre, he would systematically follow these routes, stopping to make sequential sketches along the way. A single sketch would take him approximately two hours (as we are informed by notes on the back of one of the works), and would be made on paper pinned into the lid of his painting box – also on show in the gallery – which contained bladders of pigments, brushes, rags, a palette knife and a variety of strengthened laminated papers, prepared with a range of coloured backgrounds. This use of different base tones was something Constable was keenly experimenting with during his Brighton years, as was underdrawing in pencil (thought to be unique to this period). In fact, these four and a quarter years were pivotal to his style overall, as Harrap describes: “There’s just a massive shift in terms of the way the paint is handled: it’s scraped, it’s impasto, it’s scratched back, it has an infinitely bigger range of visual language”.1

On his walks, Constable sketched bays, waves, the South Downs, windmills (familiar territory to him as a miller and grain merchant’s son) and, in his walks eastwards along the beach, fishing boats and colliers coming in to shore. The drawing, Scene on the Beach at Brighton (1824), is quite exquisite with the wind billowing in a sail of a fishing vessel on the beach and in the skirts of a mother, scooping up her child, as he leaps shy of a lapping wave at his feet. This, as many another sketch and painting, really captures the hustle and bustle of life going by on the beach – a place the artist referred to as “Piccadilly – by the seaside” – people both at work and at play.

One major oil painting included in the exhibition is The Marine Parade and Chain Pier, Brighton (c1824), which was painted back in his Charlotte Street studio in London, using the visual notes of his sketches. The pier had been built the previous year as a landing stage for ferries from Dieppe, to end the need for the use of rowing boats to carry passengers from the shore to the ferry and back. JMW Turner also painted this architectural novelty, and his painting, a glorifying Claudian landscape, was immediately popular and sold well as a print. Constable, despite being thought to have selected this subject matter in part to impress the Earl of Egremont, a major shareholder of the pier and a patron of Turner, whose patronage Constable also wished to enjoy, nevertheless made a much darker work, placing his focus on the workers and the coal being brought ashore. His painting met with mixed reviews and never sold during his lifetime.

In part by pinpointing the sequential nature of Constable’s three key Brighton walks, Harrap has contributed to some exciting (re)attributions. Brighton (looking towards Shoreham) (undated), for example, had lost its Constable attribution, but has now regained it because of its fitting into the rest of a sequence. The unfinished painting A Sea Beach, Brighton (c1825-27) was also recently attributed to Constable, having been cleaned in connection with an episode of the BBC television programme Fake or Fortune?, thereby revealing the same kind of pink stippled priming used by Constable, perhaps exclusively, during his time in the city, and probably applied by his studio assistant, Johnny Dunthorne, who was a trained carpenter. It is thought to have possibly been commenced to fulfil a request for a beach scene by Constable’s French dealer, John Arrowsmith, and to have been left unfinished following a major row between the two men. Reattributing place rather than artist, Study of a Trunk of an Elm Tree (c1824) – previously attributed to Hampstead and dated to around 1821 – is now thought to have been painted in Preston Park, Brighton, where there are two very famous such trees. Furthermore, research has shown it to be made on paper torn from the same sheet as that used for Brighton Beach with Fishing Boat and Crew (1824).

On 23 November 1828, Constable’s wife Maria died in London, after a final spell of his sitting by her bedside at 9 Sober’s Gardens, painting, quite lyrically, crumbling weeds and foliage brought back from his walks. Constable never again returned to Brighton. This productive and experimental period of his life had equally drawn to a close.

Reference
1. An Interview with Peter Harrap, Artist and Curator, by Mark Sheerin, in Constable and Brighton: “something out of nothing”, exhibition catalogue, pages 130-131. 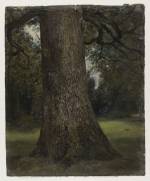