In his first exhibition in Japan, French artist Christian Bonnefoi (b1948) shows his continuous search for expression through painting. Bonnefoi’s works cover the walls in Le Forum, the exhibition space in Ginza Maison Hermès, Hermès’ flagship store in Japan.

Bonnefoi, who started out as an art historian, came across Nu de Dos, Henri Matisse’s relief sculpture of a female, exhibited at Grand Palais in 1970, an experience that led him to become a painter himself. In Nu de Dos, the figure’s back forms the surface of the artwork. Tempted to look at the face of the female, which, of course, he never could, Bonnefoi began to explore the essence of artwork; is it the surface that makes the work of art, or is there more behind the surface that is not shown in the work of art?

In search of the unseen behind the surface, he decomposes painting to its elements – pigment, canvas and stretcher – scrutinising each element as if to see whether it exists as an individual painting. One of his works, Babel XXI, which measures 280cm by 240cm, has no wooden stretcher, but acrylic pigment is applied directly over transparent synthetic “canvas”, piercing the fabric. There seems to be no hierarchy of surface and support relationship between the pigment and the painted surface. The pigment stabs the densely gauged synthetic material and the two become integrated. As to his investigation of the recto verso of the “painting”, Bonnefoi explains: “I paint from both sides of the synthetic canvas, creating a depth to painting. If there is a surface, logically there needs to be a depth to it.”

Furthermore, Babel XXI, has no frame. Instead, the work is integrated into a specially made free-standing wall in the gallery. Visitors can walk around and see through two sides of Babel XXI, as if it were a window. There is no front/surface or back to the object: even the subject of the painting defies this notion. Bonnefoi explains that the free, swirling brushwork on Babel is the trace of his physical movement of painting. It is as if time and the movement of the painter at work have been condensed in the still, flat plane of the canvas. Our notion of the front in painting is also challenged in most of his work in a further way: is the painting up the right way or upside down?

While being influenced by the French art movement Supports/Surfaces, begun by a group of French artists in the 1960s, and sharing its approach to painting, Bonnefoi searches for the moving force of the work of art: the force that culminates in the form of painting, and the force that comes out from the painting. “After the force takes the form of a painting, it continues into the minds of each of the viewers,” says Bonnefoi. Furthermore, in Eureka VIII, which refers to Edgar Allan Poe’s prose poem of the same title, in which Poe concludes “that space and duration are one”, Bonnefoi investigates how the surface plane can express the notion of 3D space or 4D time without leaving the form of painterly object. “I am continuously exploring the possibility of expression within painting,” he says. In Bonnefoi’s words: “Painting is a temporal moment that came out to the surface. I experiment with various expressions that come out in the form of drawings, objects, collage. All these are a slice of the time that has been condensed.”

These processes of Bonnefoi’s work are all displayed on specially made folding walls, which intervene inside the gallery as if another room has been inserted in the space. Even the painting is not the end. It is one phase of an ongoing process. After the painting has been disclosed to the viewer, “theoretically” the work will develop further in the minds of each individual who looks at it. 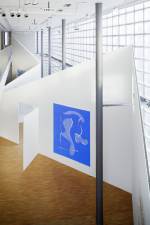