The futurist painter Giacomo Balla transformed his Roman apartment into a complete work of art. Now, thanks to the Maxxi Museum, Rome's authorities and Balla’s heirs, it is open to the public 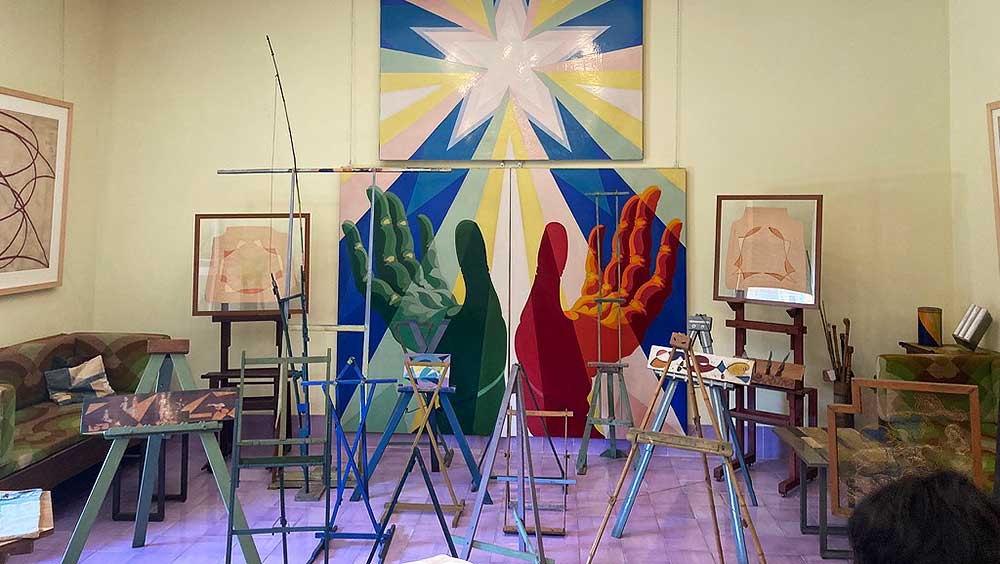 In 1915, the Italian artists Giacomo Balla (1871-1958) and Fortunato Depero collaborated on a manifesto entitled Futurist Reconstruction of the Universe. This argued for nothing less than a complete remaking of the world: “We futurists Balla and Depero want to achieve this total merger in order to reconstruct the universe by cheering it up, that is, by recreating it in its entirety.” Everything would be redesigned to match the futurist aesthetics of a new era. There would be futurist clothes, futurist furniture, futurist coffee sets, futurist Campari Soda bottles. Houses would be turned into complete works of art. “We will find abstract equivalents,” the pair continued, “for every form and element in the universe, and then we will combine them according to the caprice of our inspiration.” 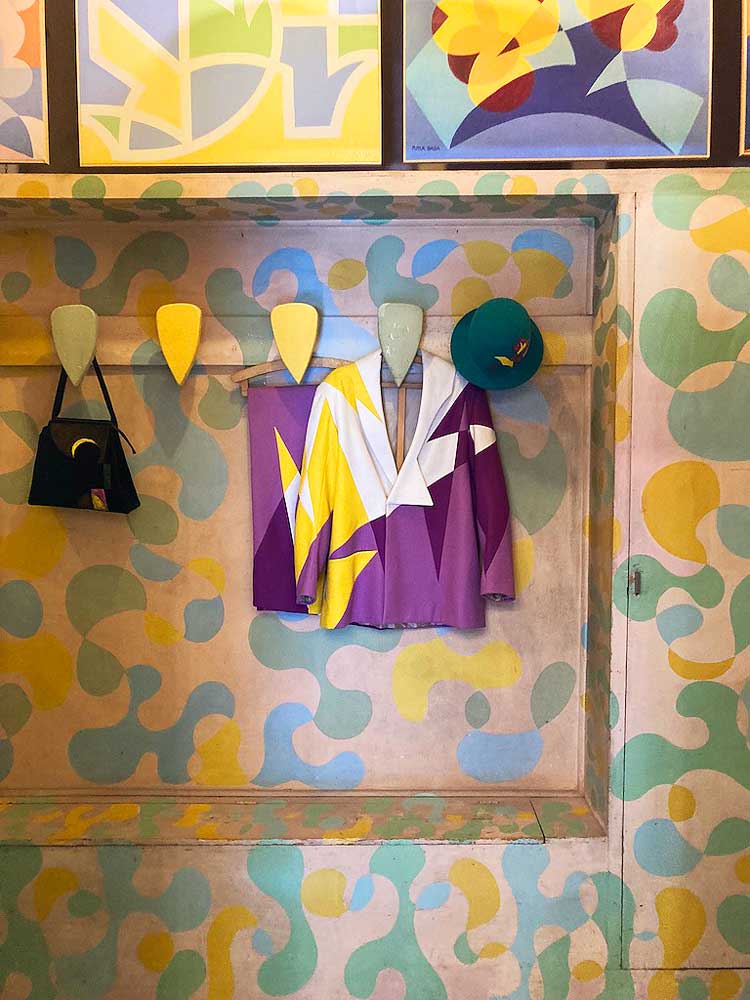 It was a tall order. The manifesto was also surprisingly forceful given its authors. Whereas one flank of futurism, led by the movement’s founder, Filippo Tommaso Marinetti, was obsessed with machinery and militarism, Balla represented a softer side of the movement. His works are rarely as jagged and soaring as those of his compatriots. They often draw on quotidian features of modern life, whether the hand of a violinist or the glow of streetlight. They can even be whimsical, as with his famous Dynamism of a Dog on a Leash (1912), which captures movement not in motor vehicles but the legs of a small dachshund and the feet of its owner. 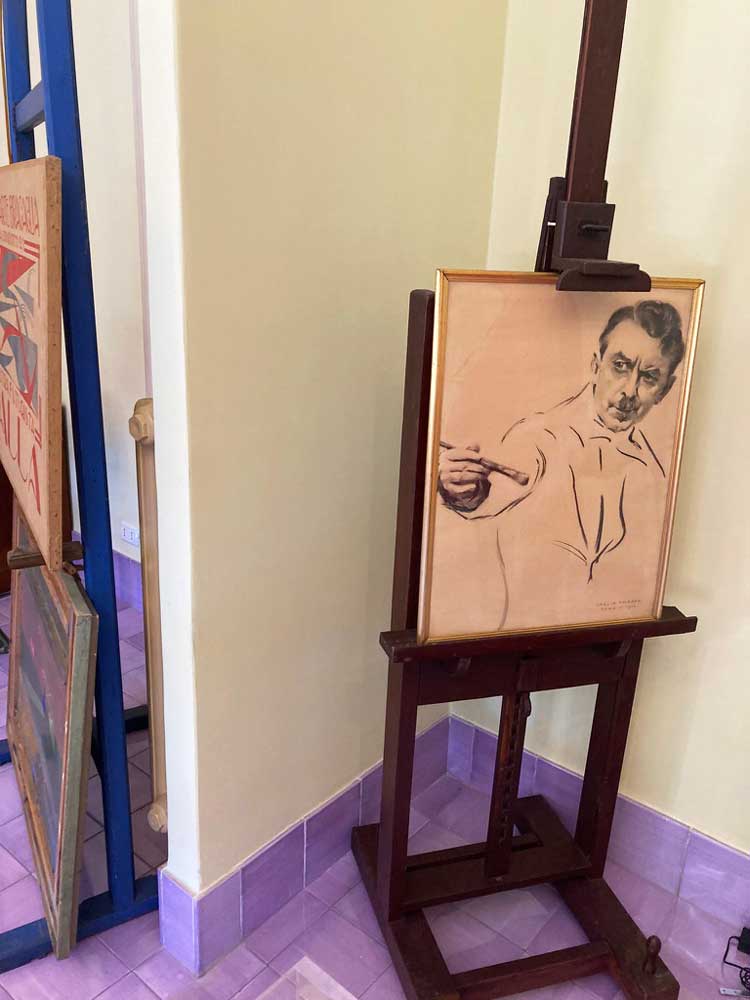 The initial wave of futurism perished in the first world war, though many of its proponents continued on, with Marinetti tying the movement to fascism in a bid to make it the official art of the new regime. Balla turned away at this point. He diversified, working in stage design, graphic design and acting. His paintings became more abstract, seeking to capture motion and velocity through colour. But the radical ambitions of 1915 remained. In 1919, he moved into an apartment near Villa Borghese, which he set about decorating and then opened to the public on Sundays.

Ten years later, in 1929, Balla and his family moved to an apartment in Via Oslavia, in Rome’s Prati district, an upmarket sprawl of turn-of-the-century apartment blocks. He would live there until his death almost 30 years later. During that time, he transformed a conventional bourgeois apartment into his own complete environment. Later, the apartment was cared for by his daughters, themselves painters, who lived there for their entire lives. After their deaths, it underwent a period of neglect before being acquired by Rome’s Special Superintendence of Archaeology, Fine Arts and Landscape in 2004, which restored it to its state in Balla’s later life. 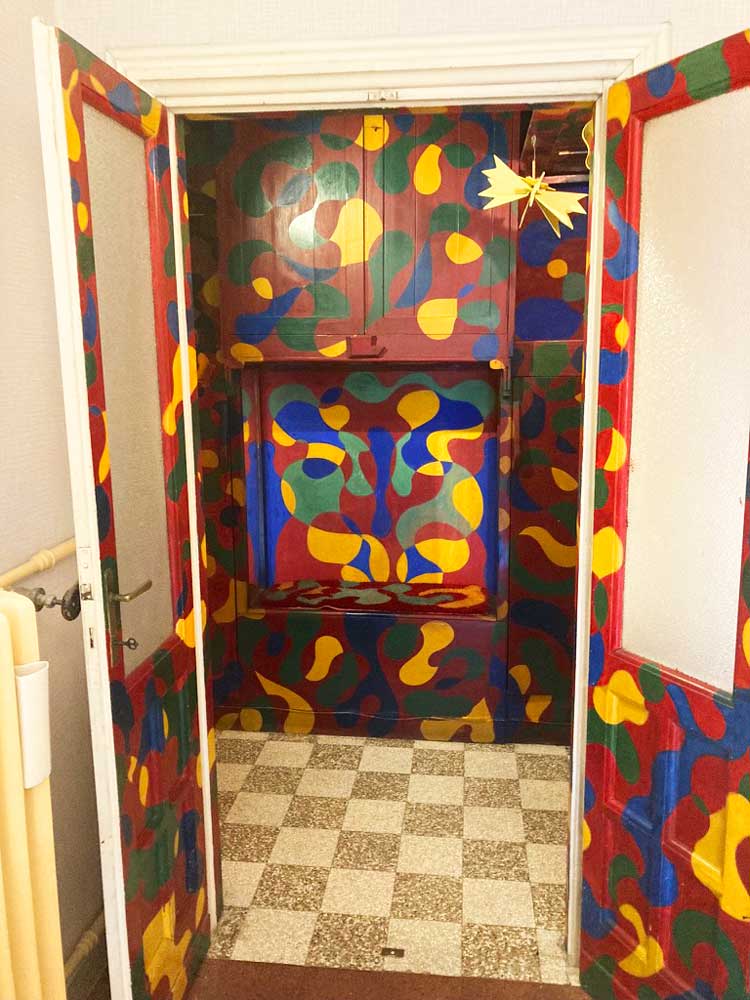 Casa Balla is now open for tours organised by Maxxi, Italy’s national museum of contemporary art. At Casa Balla, the museum writes: “Art invests everything, and the objects designed and built for everyday use, tables, chairs, shelves, easels, ashtrays, plates, tiles, although poor in their materials, are rich in their creative vein and make the flat a magical place of metamorphosis.” 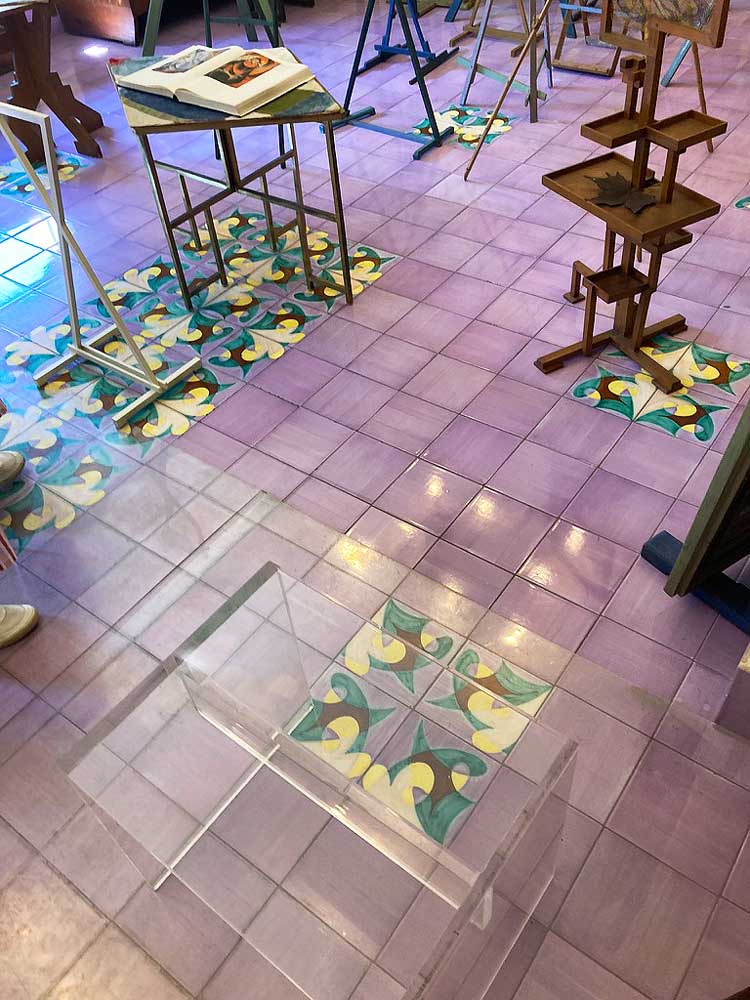 On entering Casa Balla, however, the first thing I notice is the heat: the restoration of the apartment has not included the installation of contemporary air-conditioning units. Next, I am struck by the sheer profusion of art. The first room one enters has been filled with easels and tables displaying Balla’s work. There is a self-portrait and a bronze bust of Balla. There are drawings and paintings, many abstract, from across his career. There are Balla-designed cabinets, rugs and footstools. An enormous triple canvas has been installed against the far wall, a pair of hands reaching out to a star. But perhaps most fascinating is the way Balla’s characteristic aesthetic infiltrates every corner. An abstracted floral motif appears everywhere, from the floor tiles to the ceiling lampshade. 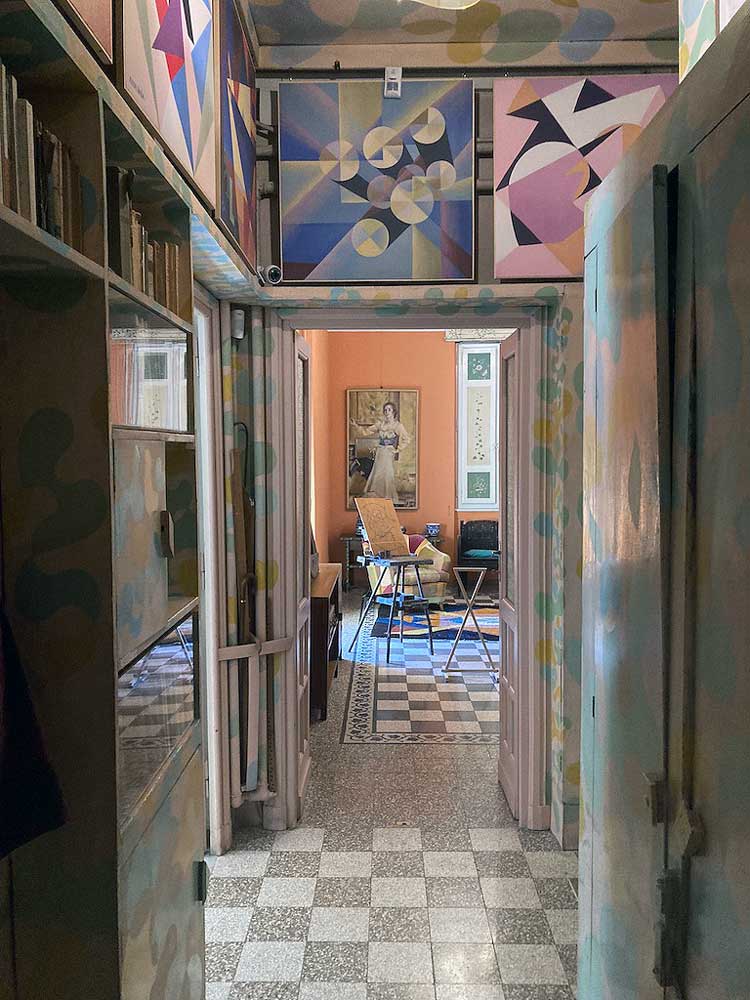 Casa Balla is amply sized, but not enormous. Its rooms are connected by an L-shaped corridor, the walls and ceiling of which are painted with globular, organic, amoeba-esque forms in light blues, greens and yellows. There are Plexiglas lampshades in the same style. The upper walls in this space are occupied by a sequence of square abstract paintings, worth the craning up to see. A built-in coat rack displays one of Balla’s futurist suits, a garment covered in shard-like forms in purple, white and yellow. It looks like something from the age of psychedelia, but is from the mid-1910s. 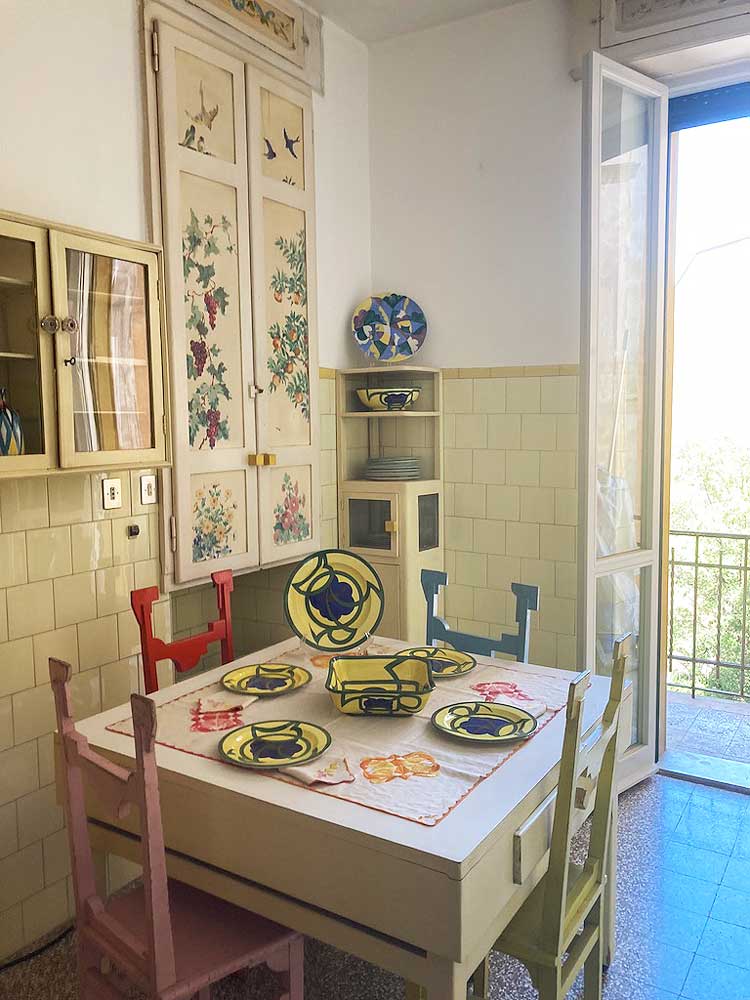 At one end of the corridor are the bathroom and kitchen. The former is covered in tiles, some turquoise and others in further blooming patterns, with vases demonstrating similar designs. In the kitchen, which exhibits the lightest touch from the artist’s hands, there is a ceramic dinner set covered in Balla designs and a set of architectonic futurist dining chairs, among the most overly futurist items here. 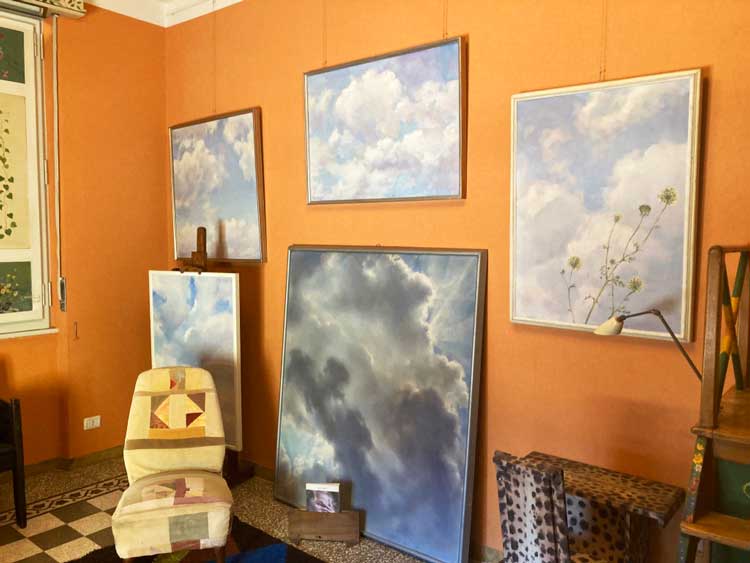 A series of paintings by Elica Balla. Photo: Joe Lloyd.

Peeling off the corner of the corridor’s L-shape are two rooms that ultimately functioned as the bedrooms of the two sisters. One has peach-toned walls, against which leans a series of paintings by Elica Balla showing the sky in various states of cloudiness, a sort of surrogate window. There is a tiny, raised mezzanine bed in the corner. The other, in soft green, is decorated with Luce Balla’s landscapes and her father’s abstract floral sculptures. On the ceiling, painted rays of light burst out from a deconstructed chandelier. 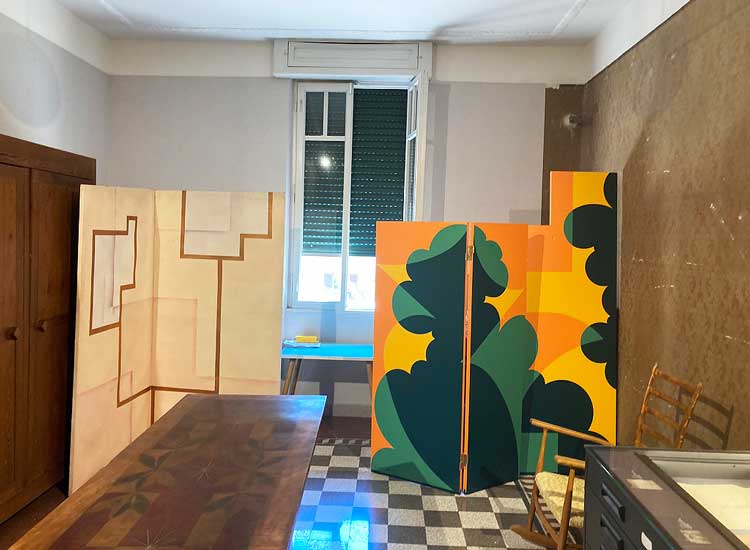 This turn also leads to the strangest and most intoxicating part of the apartment. A pair of classical busts and a vase preside over a sort of nook, used in part for book storage but with no clear reason for its being distinguished from the rest of the house. Here, Balla’s wall painting loses its spring morning palette to become deep red, blues, greens and yellows. A seating alcove offers a place to pause and meditate on the surrounding world of pattern and colour. Balla and his family achieved something very special: a liveable Gesamtkunstwerk, where their singular art blossoms alongside daily life. 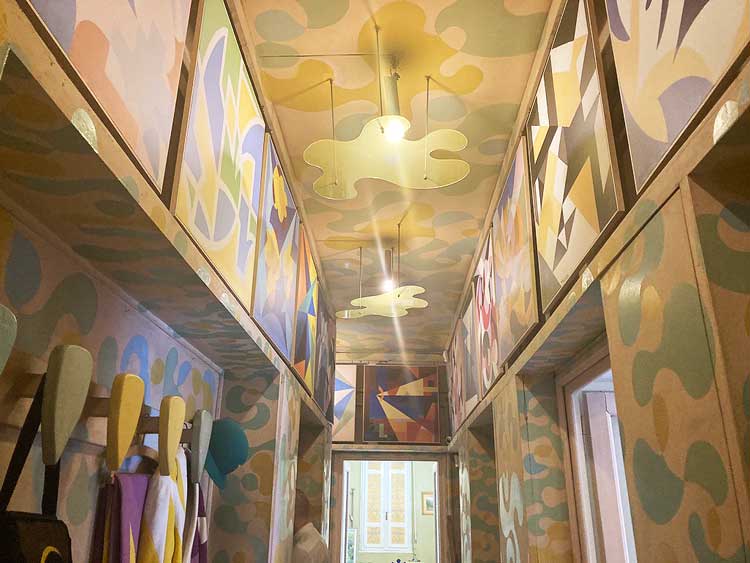 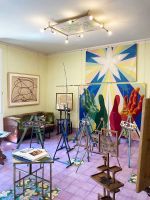 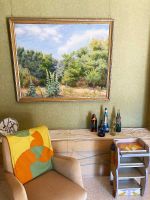