Increasingly, contemporary artists, as much as architects and urban planners, have to grope for a clearer understanding of the nature of cities in the 21st century. It seems more necessary than ever to put aside the established works of the past half-century and more, even Lewis Mumford is of limited use, and such self-styled theorists as Constantine Doxiadis are somewhat devalued. The work of Patrick Geddes is, by contrast, still relevant. The idea of the city is still enshrined in literature, art and culture, generally as the principal spatial generator of virtual reality; indeed this has been the case ever since the Renaissance painters devised an urban contextuality for their motionless figures. Professor David Grahame Shane has now rigorously plotted and charted the new urban reality as it emerged exponentially from the time Ebenezer Howard first prepared his revolutionary model for 'slumless, smokeless cities', in late 1890s England.

The city has continued to enchant authors. In 1972, Italo Calvino imagined a series of fabulous cities, and earlier James Joyce's 'Dubliners' populated that city with their own images and words. In the 1960s, the urban theorist Kevin Lynch developed his highly romanticised 'Theory of Good City Form', proposing 'how the environment ought to be made', and stating that 'creating order is the essence of cognitive development' suggesting that urban 'actors' seek out 'a simple and patent first order structure, which allows a more extensive ordering as it is more fully experienced, and which encourages the construction of new meanings, through which the inhabitant makes the world his own'.

In 'Learning from Las Vegas', Robert Venturi, Denis Scott Brown and Steven Izenour eulogised the commercial strip in the early 1970s, at least showing how cities were already transforming. Artist Ed Ruscha supplemented these ideas in his own work and never was this proposition borne out more fully than with the prolonged wave of urban graffiti makers/'writers' (as they dubbed themselves) who in that same decade began to transform rail sidings, subway coaches, and adjacent buildings and hoardings in New York City. By the late 1990s, however, it had all gone - someone 'called time'. Hardly a trace now exists, not even in the Museum of Modern Art, which should have a whole coach or wall, at least, to recall those stirring times.

Grahame Shane has done nothing less than supply a key handbook, clearly yet lucidly written, setting out a new way of conceptualising and realising the city. He is generous with his acknowledgment as befits an Architectural Association School graduate of those times. He gives important precedence to Spiro Kostof, Francois Choay, Michel Foucault and Alvin Boyarsky, but also to Peter Cook and the Archigram Group, to Cedric Price and also to the theorist and critic Colin Rowe, of Cambridge and Cornell Universities. However, Foucault's concept of 'heterotopia' is identified as the key intellectual generator in this revolutionary surge.

Shane now finds the city to be both a patchwork of heterogeneous fragments and a combination of heterogeneous flow systems, engaging with 'a chaotic feedback system', spawning specialised 'patches' of urban activity, themselves fostering change, as it were, autonomously. This all amounts, says Shane, to 'a total acceptance of the irrational in the postmodern city'. An essential bureaucratic sacrifice to such dynamics is the disappearance, by redundancy, of the master plan so beloved of implementors. Instead, the city complex is found to have transmuted into a layered structure of heterotopic nodes and networks. Shane derives the concept of heterotopia from the French thinker Michel Foucault, who had himself borrowed the term from medicine via the medical dictionary - there simply implying 'cell' or 'group of cells' - in a key 1964 article. Elsewhere, heterotopia is defined as a cell or group, existing 'non-malignantly within a host cell or related tissue, in a part where its presence is "abnormal"'. In fact, it all sounds remarkably like the spread of cancer cells, but this is not mentioned. These heterotopias offer within themselves multiple compartments that can hold contradictory and complementary spaces, as Foucault acknowledged. A heterotopia thus becomes 'a single real place made up of several spaces, several sites that are themselves incompatible. To the player, artist, architect or planner, in the urban realm, heterotopia is able to 'mark out a centred space and to handle or sort disparate flows, offering feedback and monitoring imbalances'. Heterotopia is therefore always an ambiguous space or set of spaces, yet ringed (and so defined) by a tangible perimeter or border. The difference between stasis and flow processes runs through these urban armatures, so created with the fragments coalescing or hiving off.

Shane develops a new urban litany recognising these fundamental characteristics, rather than denying their reality. Transient 'new' nomadic and migrant populations and groups require these distinctions thrown up by the regimented urban grid or template in order to thrive and prosper. In any vacuous area hedged between different institutional orders, such as the walled city of Kowloon, Hong Kong, Christiania Island in Copenhagen or obsolete Netherlands dockland warehouses, heterotopia flourishes, and artists and creative players agglomerate.

There is a danger for artists as well as architects to perform a of a kind of 'reification' of the individual and so of his or her product in such a milieu; promotion of this can cause a loss of real human identity and the commodification of art. Art becomes drained in reaching for such predetermined play. This also increasingly occurs in the landscape and garden field. The Paris-based artist Bernard Lassus has ingeniously inverted this threat, exploring how wholly artificial garden elements and symbols can actually assist in recovering human meaning and values.

Shane offers what he calls a recombinant urbanism, well documented and illustrated in this work, and proposes the 'Net City'. Time itself is incorporated as a kind of vertical transformer, energising the many active players. A vision emerges of the recombinant city, perhaps populated by Hopper figures of serene and relaxed urbanity, accompanied by Gormley figures perched on urban parapets. This book, as Shane proposes, is an attempt to offer real tools for comprehension, and so empowerment, in the new emergent heteretopia for the innumerable actors and players both collectively and individually, for creative and social survival and for families, city-dwellers and artists to achieve a fuller deeper, participation. Shane has provided a thought-provoking handbook for city survival in the 21st century, nothing less. 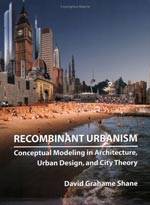