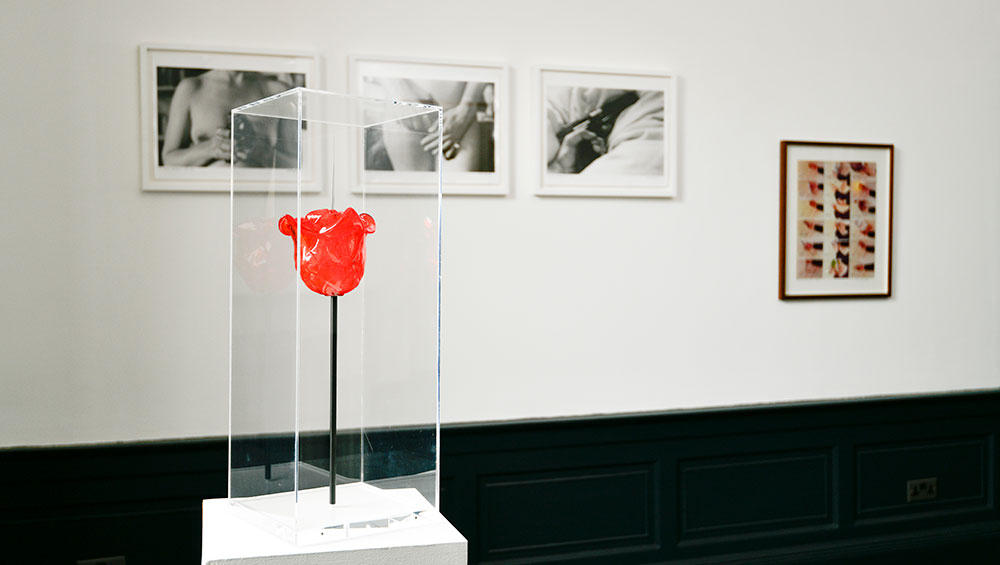 Curated by Philomena Epps for the Richard Saltoun Gallery in Mayfair, London, as an online show earlier this year, Bodily Objects has now opened in its physical form at the Arusha Gallery in Edinburgh. A subversive and humorous exploration of women as objects seen through the male gaze, the show is a refreshingly bold and brilliant assertion of feminist perspectives on how it feels to be seen, in reductive, fetishised ways.

A bed of three red roses made from hand-blown glass and a metal stalk, a jagged piece emerging from the centre of each like a unicorn’s tusk or a dagger; a photograph of a woman on horseback, wearing nothing but a tail; a slab of meat next to a flowing sheet of pale pink silk; a distorted Madonna and child. In these and other artworks by seven feminist artists – Helena Almeida, Renate Bertlmann, Helen Chadwick, Judy Chicago, Rose English, Alexis Hunter and Carolee Schneemann – what it means to be a woman and to be seen as such is explored with provocative wit. These artworks probe what it means to have body parts but also the sensation of being a body – being “bodily” – doing things “bodily”. Being seen as little more.

They are also explorations of what it means to be detached from the body – one’s own and others’ – whether that is through fetishisation, replacement or erasure. The exhibition allows us to take a step away and view the surrealism and absurdity of being merely “a thing” and seeing other people as things – the endless dissonance of this modern mind-body problem. How do we reconcile the mental and the physical? How do we communicate our inner lives, when we are seen by others as mere objects? How do we express the frustration at being reduced to hair, skin, nails and organs? How can art disrupt the social structures that treat women as things to be controlled, possessed and manipulated? How can women truly “embody” when their bodies are seen as things to be owned by men?

Chadwick, in her photographs featuring slabs of meat and Barbie dolls, for instance, invokes horror and repulsion through still lives that reveal plainly and darkly the horror of objectification. In Birth of Barbie (1993), she shows the female body as meat, giving birth to a smiling Barbie, and the grisly horror and distortion of the male gaze is plain to see. In her other Meat Abstracts – a series of eight large-format Polaroid photographs that she made at the Victoria & Albert Museum, London in 1989 – the horror is less palpable, but the implications remain the same: the possession of femininity by the male gaze transforms it into something grisly, something dead. Sexuality is married with violence; misogyny is inevitable when humanity is removed from the physical.

The horror of this existential situation is reclaimed and subverted elsewhere in the exhibition, lightening the atmosphere and giving a sense of much-needed empowerment and focus. English, for instance, uses the pageantry of horse dressage as a metaphor for the fetishisation of women’s bodies.

In Rose and Athene (1974), nude models appear to straddle small porcelain horse statuettes, playfully sending up pornographic tropes and implying the relative physical strength of the women in focus. They are in the position to crush their toy horses; this is at once empowering and ridiculous. Ideas of power, strength and vulnerability have become surreal and absurd. English makes a spectacle of sexual rituals, interrupting the male gaze with a sort of nonsense.

In English’s video work Quadrille, a choreographed performance given at the 1975 Southampton Horse Show, she has dressed six models in horsehair tails attached to harnesses, and high-heeled hooves. This spectacle sends up the crudeness of the male gaze, wryly exposing the distanced and fetishised way in which female bodies are so often represented, and creating in its place a world that seems mythological, its women reminiscent of the valkyries of Norse mythology or the centaurs of Greek myths. Sexuality is everywhere, and everything seems to be part of its construction; sexuality is a mirror of the world, with its projected influences and myriad systems. And yet English diffuses this power, plays with it, questioning the rituals and norms we are so used to, and liberating the stories we tell ourselves, and are told.

Chicago, too, considers how female body parts and functions are controlled and censored, in her 1971 work Red Flag, a photo lithograph of a woman pulling out a used tampon – dramatic and yet mundane, she shows the ways that some cycles and rituals are seen as repulsive, no matter how natural, whereas those rituals prescribed by patriarchal societies, however ridiculous, are normalised.

In Bertlmann’s exquisite series of glass roses – originally created for her installation of 312 “roses” for Discordo Ergo Sum at the Austrian Pavilion at the 2019 Venice Biennale 2019 – she reveals the clashing ideas associated with femininity, from the vulnerability and fragility of their glass forms to the sensuality of the dagger-like protrusion, replacing the flower’s pistil, which is both sexual and dangerous, fragile and threatening, as these distinctions and categories are broken and blurred.

These roses, beautiful yet lethal, familiar yet revolutionary, tie together the energies and ideas of the show as a whole. Celebrating the female body and the endless potential of women to reclaim, revolutionise and play, Bodily Parts brings these feminist ideas and attitudes to the forefront, showing how subversive and brilliant those feminists of the 70s were, and how their bravery and humour continues to inspire new generations of artists who concern themselves with embodiment, gender and the existential crises and spectacles they imply.