BGL: ‘In our installation, people play with money, and we like this game’

BGL: ‘In our installation, people play with money, and we like this game’

Canadian art collective BGL makes art that is playful and provocative, parodying everyday objects to comment on our material passions and obsessions with consumerism. Studio International spoke to them at the 56th Venice Biennale

The BGL art collective was formed in Quebec in the mid-1990s by Jasmin Bilodeau, Sébastien Giguère and Nicolas Laverdière, who met while studying at Laval University in Quebec City. The group became known for making art that parodied everyday objects, especially technological equipment, with computers carved out of chunks of wood, or makeshift phone booths set up in the middle of grassy fields, for example. Although BGL has had multiple exhibitions in Canada, the group has not shown widely on the international art scene, but now its playful and provocative installation Canadissimo is on view at the Canadian Pavilion at the 56th Venice Biennale. To make it, BGL used the pavilion’s plain design as inspiration, transforming the building into a multi-tiered site of adventure exploring the world of lowbrow consumerism.

On entering the pavilion, we find ourselves in a convenience store, such as those seen at any petrol station, complete with shelves neatly stocked with bags of crisps, cans of soda and boxes of cereals. Finding the print and images on some of the boxes seems blurry, in frustration, we strain to see it and even put on our glasses, only to discover that there is no hope of seeing it clearly, because the print is intentionally blurred. Having been introduced to the work through this practical joke, we view the rest of the exhibition, expecting surprises along the way.

Leaving the store behind, we enter a sequence of rooms, one of which looks like a living room, followed by a studio overflowing with paint cans, ceramic figurines and bric-a-brac of the sort that one might expect to see in an artist’s studio, where the oddest objects sometimes find a home. The most exciting part of the adventure awaits us at the end, after a steep climb to the second floor, where we find a maze of shiny metal gutters and beams forming a construction for channelling money. Thrown by the public from atop the structure, 1€ coins roll merrily along the twisting gutters ending up forming a pattern between two panes of glass. Having come to look at art, we are being entertained by playing with money. The installation is fun and witty, and the artists are open to talking about it.

Natasha Kurchanova: Congratulations on a wonderful pavilion. How long have you been building the installation?

BGL: This is our sixth week. It’s a long time for us, because usually it takes about 10 days to assemble an installation.

NK: I would like to know about your group. When did you start working together as a collective?

BGL: We’ve been together for 18 years, and Marie Fraser [the curator of the exhibition] has been working with us for 18 years as well, since our first exhibition in a professional context in 1997. We met at Laval University in Quebec City.

NK: How do you work? Do you conceive and make everything together, or do you become responsible for one particular part of the installation: for example, is one room downstairs is for Jasmin, one for Sébastien, and one for Nicolas? Could you tell me about the process of construction of your project at this biennale and how it came about?

BGL: We work on everything together. We came in 2014 with Marie and Josée Drouin-Brisebois, who works at the National Gallery of Canada. We spent a week in Venice, where we brought a measuring tape and a camera and took photographs. It was important for us to get inspired by the place where the installation would be located, because our installations are site-specific. Then we tried to figure out what to do, and then it took a couple of months to put together a proposal.

NK: The store downstairs is a great entrance to the exhibition. How did you think of it?

BGL: We wanted to start with a small service station or a store of sorts, something very typical from our environment. We thought of it because we also have a terrace-like space upstairs and thought that a store would be a nice introduction to it.

NK: What I liked about the store in particular was that it played with the physicality of vision in a very subtle way. The print on the boxes in one area of the store is blurry. I do not have very good vision, so I put on my glasses to see better, but then I realised that the print was made to look blurry intentionally.

BGL: Yes, this device forces you to strain your eyes, to make a physical effort that makes you doubt the veracity of your perception. Jasmin thought of it, and we were very excited about this idea.

NK: How did you come up with the idea of the money machine, which is absolutely great, because it is engaging, participatory and pertinent, since it touches on people’s obsession with money?

BGL: The idea was dictated to us by the location. We had to make an installation for an open space with many windows; naturally, a scaffold-like construction seemed a perfect way to go. We thought of an automatic teller machine as our prototype. Then we had the idea of having money collected between two panes of glass, forming a pattern in a manner of a stained-glass window. For a while now, we have been interested in the question of money and wanted to make a project that reflected that interest. We experimented with the idea of money falling between two panes of glass. Then we thought of a humorous and playful construction that would make people participate in the creation of stained glass collectively. In our installation, people play with money, and we like this game.

NK: Yes, you also transform the function of money in this installation. Does all your work touch on the ambiguity between what is real and what is not real? Is it concerned with changing the function of things, making them strange?

BGL: Yes, this is a big part of our work. It is also based on the difficulty of distinction between what is art and what is not art. From the very beginning, our first video at the School of Visual Arts [at Laval University] in Quebec City was about the difference between art and non-art. The video was called Ceci est de l’art, ceci n’en est pas (This belongs to art and this does not). We made it in 1996. We use familiar, everyday objects, but we make them look strange through a hardly noticeable transformation. Terracotta sculptures on view in the third room of the installation are a good example of such objects. All of them were done mechanically and in series, but we make them look artisanal.

NK: It looks as if it would be complicated to put this mechanical installation together and make it work. The machine itself looks like an engineering feat. Are you all good engineers?

BGL: No, the mechanism was put together by technical assistants. We are builders, carpenters. We built almost the entire construction. We are not good engineers, but “patenteurs” – people who build ordinary things, something similar to a bricoleur.

NK: I was very much impressed by your installation here and will be following your work from now on. Do you go to the United States often?

BGL: Not really. It would be nice to, because all we have to do is rent a truck and cross the border. We did take part in the Volta art fair in New York this year. Also we exhibited at Artists Space in 2007 as part of a group show called On Being an Exhibition. That was a lot of fun.

NK: What is the intensity of your work? How many projects do you do a year?

BGL: We do four or five installations per year. That’s the average, and it’s a lot, because some of them are huge and require a lot of work. Because of their size, we have difficulty finding storage for our work. We do not sell everything, so we have to find a place to preserve the installations we make.

NK: And unlike conceptual artists, you do not draw plans of installations instead of making the actual thing.

BGL: Not yet. Maybe in the future we will.

NK: Do you have any other projects you are developing now? What are your plans after the Venice Biennale?

BGL: Right now, we are working on two big outside installations in Toronto and Montreal. One is at Toronto Pan Am Sports Centre on the Scarborough campus of the University of Toronto. It is called La vélocité de l’eau/Water Velocity. We made it last year for the 2015 Pan Am and Parapan Am Games. The second one, made this year, is in Montreal, Quebec: La velocité des lieux (The Velocity of Places). It was made for the Henri-Bourassa-Pie-IX intersection, in the borough of Montréal-Nord. It is the biggest work ever commissioned by the Public Art Bureau of la Ville de Montréal.

NK: So, you do a lot of public works?

BGL: Not enough. There used to be a bank in Quebec. We were sending proposals for art projects supported by this bank, and we were losing all the bids, so we stopped. When we gave up, they started inviting us. Since we need the money, we decided to try again. We won two bids in a row. We accepted the bids, because the offer we received from them was very good. So, it’s going well for us now.
NK: Which artists inspire your work?

BGL: There are many. Most important for us are Mark Hursty and Paul McCarthy.

NK: Thank you for your time, Jasmin, Sébastien and Nicolas. It was a pleasure speaking to you and learning more about your work. 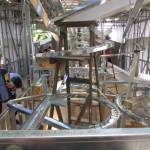 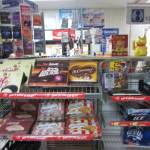 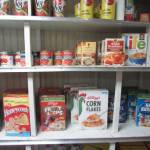 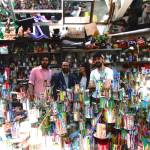