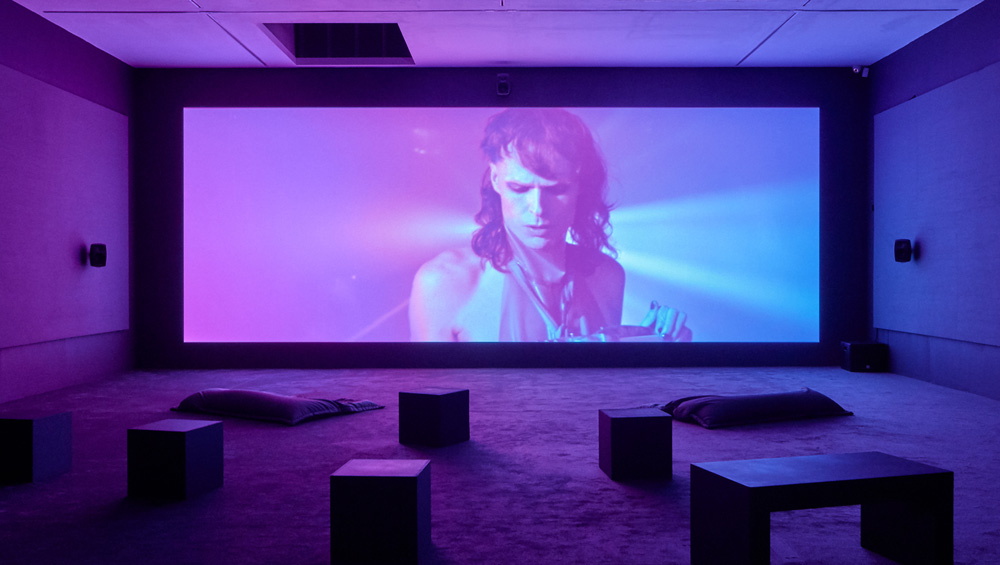 Ascending to the Camden Art Centre’s gallery floor, I am met with a row of full-bleed posters. A lineup of starry names – Eileen Myles and CAConrad … Alice Guy and Lis Rhodes … Basma Alsharif and Philip Rizk – advertise workshops and readings, performance and screenings to coincide with the run of Beatrice Gibson: Crone Music. These events tell us something about Gibson’s working methods. Curators, poets, film-makers and composers make up a group of friends whom, I learn at an artist’s talk hosted by curator and film scholar Erika Balsom, the artist considers a “community”. And Gibson (b1978), one presumes, is at the centre of it.

Yet the first gallery room I enter is devoted to her peers. Boxy monitors channel a film programme arranged by the artist that includes work by, among others, Leslie Thornton, Mati Diop and Chantal Akerman. Odd bits of furniture sourced by the gallery staff serve as a backdrop to live performances, while a reading table featuring key organising texts for the show, Gertrude Stein in first position, is on hand to occupy and educate. 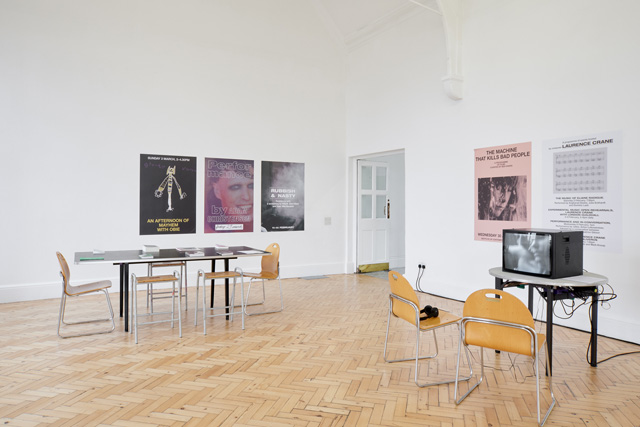 There is a feeling of potential energy and activity to come, that gestures to what I take to be the show’s central proposition: how to pull resources together to endure a terrifying, unknown future. Gibson’s response to this urgent task is posed by two films that form the exhibition’s centrepiece. Conceived simultaneously, they are formally experimental, eschew narrative structure, and gift the viewer with beautiful colours and masterful dissolves across 16mm and digital formats.

The first of these, I Hope I’m Loud When I’m Dead, takes its title from a poem by Conrad. It opens with flickering images of an abrasive commuter journey, the artist’s voiceover reinforcing her sense of feeling constricted. “I can still feel my body except it’s like the skin is gone,” Gibson confides in a faltering voice, as archival footage of melting polar ice caps and police brutality shudders across the screen. An unpredictable future marked by ecological and political meltdown is linked to the artist’s embodied navigation of the urban landscape. 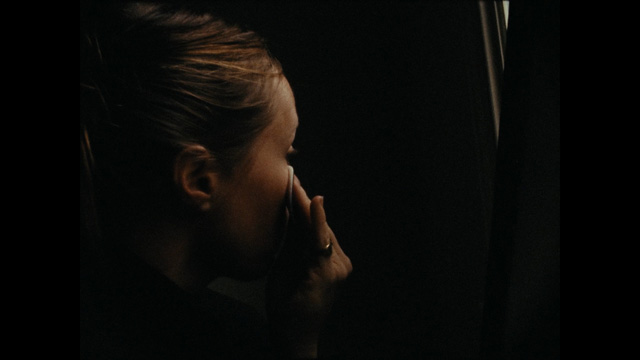 This establishing material gives way to a surprising juxtaposition. A recording of Trump’s 2017 inauguration speech manifests the reality of US imperialism. Gibson plays Trump over intimate scenes of a conversation between Conrad and fellow poet Eileen Myles in the latter’s New York apartment. Candles are lit, a deck of Tarot cards shuffled, and colourful furnishings soften the film’s opening violence as Conrad’s distinctive voice cuts across Trump’s presidential address. “Many are haunted by human cruelty through the centuries,” the poet intones, as if calling out the president’s bluster.

Through these measures, an opposition is set up between the negative effects of rightwing populism on daily life, and, on a more nurturing, hopeful note, those queer spaces and modes of production through which one may collectively resist those effects. Conrad and Myles’s conversation is thus invested with an ethical value, one firmly rooted in histories of queer kinship. 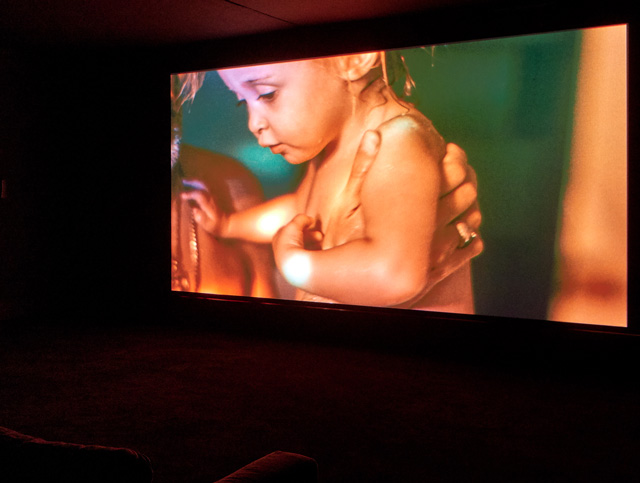 Their filmed dialogue comprised a stand-alone project until the artist decided to develop it into a longer work. “It needed something else,” Gibson tells Balsom, ahead of the private view. As testament to this incipient version, Camden Arts Centre’s reading room is allotted an offshoot. For Eileen, For CA presents rushes of the two poets, seated in Myles’s apartment, reading recent work and reflecting on their lived experience. Scaled down to the monitor, these have an intimacy that the final project’s grander conception doesn’t allow for.

This difference leads me to reflect on a second aspect of I Hope I’m Loud When I’m Dead; namely, Gibson’s decision to include sequences featuring herself, her partner, and their children, Laizer and Obie. A relationship is posited between the (queer) resistance offered by Conrad and Myles, and the artist’s own family and self as a second, co-extensive site of resistance and sustenance. This link is brought home when, at a memorable moment, a baby’s bottom dissolves into Conrad’s face. 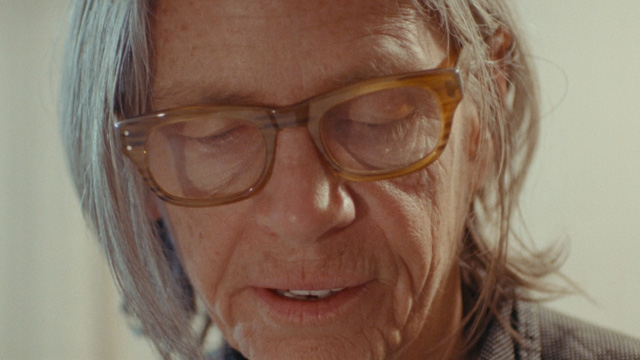 If the subject of I Hope I’m Loud is bound to an imagining of possible futures, one might be tempted to read this double site of resistance as bifurcated along reproductive lines. It is true that queer communities and the family stand in a historically antagonistic relation. Yet such criticism in this context is wrong-headed on two counts: first, it ignores the need to conjugate queer politics with feminist histories, risking a misogynistic point of view – parenthood is not in itself heteronormative; and, second, it disregards the film’s pervasive anxiety about what the future looks like for everybody. If there is a snag, it is that some images of the children playing on the beach are too refined, entering the territory of iPhone memory capture.

In conversation with Balsom, Gibson expresses the need she felt to make herself vulnerable by bringing her life into the frame. This process is aided by her second-person address to, and citation of, feminists and writers ranging from Audre Lorde to Alice Notley and Adrienne Rich, an epistolary dimension that culminates with a message to the artist’s daughter composed in the future imperfect. For Balsom, Gibson’s use of texts approaches the feminist and writer Sara Ahmed’s conception of citation as a “reproductive technology”, whose usage carries forward voices that might not otherwise be heard. 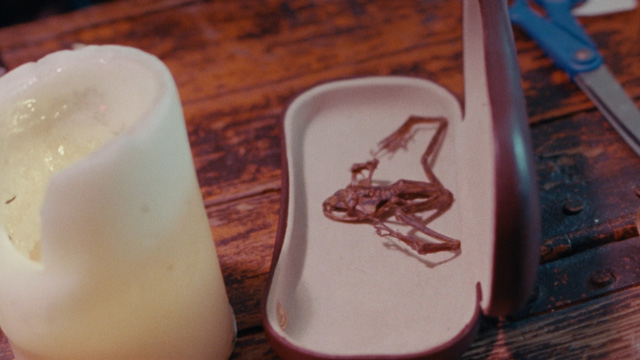 This future orientation is obstructed by the explosive drop of Corona’s 1993 track, The Rhythm of the Night. Announcing the film’s last stand, Gibson reconstructs the final scene from Claire Denis’s 1999 film Beau Travail. In place of Denis Lavant, we find the artist and her son, Obie, who is a wearing a green mask and, incidentally, the same school jumper he wore to the private view, dancing self-consciously in the mirrored basement of Ridley Road Market Bar in east London.

Thematically, we seem to have lost sight of the poets’ conversation; yet, appropriately, there is no resolution. At the same time, this dance scene serves to bridge the two exhibited films, the artist using opposite ends of the bar to shoot sequences that appear in both works. This join makes sense of her interest in an expanded cinema – a term that, for her, means bringing one’s world, friends and film crew into the frame.

Gibson’s conception of an expanded cinema pays homage to Stein’s notion of a present tense; as the latter wrote in a 1926 lecture, Composition as Explanation: “In that there was a constant recurring and beginning there was a marked direction in the direction of being in the present although naturally I had been accustomed to past present future, and why, because the composition forming around me was a prolonged present.”1

By repeating strings of words with slight variations, Stein interlaced sentences in such a way as to prolong the present, introducing and abandoning elements without collapsing sentences into a narrative structure. Gibson deploys music, lighting and locations to similar effect. The show’s title, Crone Music, is taken from a 1990 album by the late avant-garde composer Pauline Oliveros, whose minimal polyphony sits in an interesting relation to a newly commissioned work by British composer Laurence Crane. 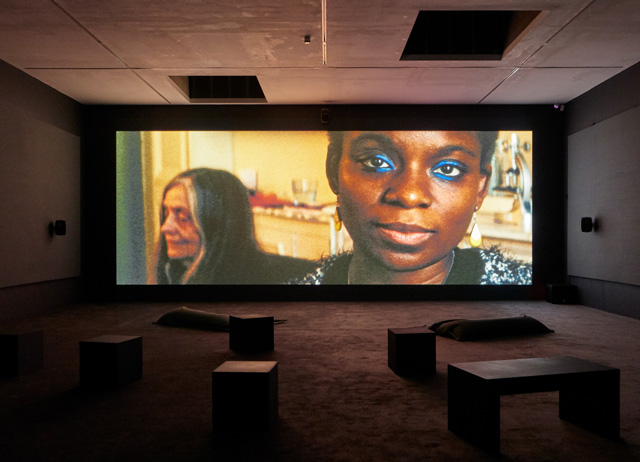 The second film on show, Deux Soeurs Qui Ne Sont Pas Soeurs (Two Sisters Who Aren’t Sisters), takes its title from a one-page play, or “provocation” as Gibson refers to it, written by Stein in 1929. In my view the more successful of the two films, Deux Soeurs departs from a fantastical crime involving a lost dog, here modelled after Basket, the poodle belonging to Stein and her partner, Alice B Toklas. The strand that deals with this is filmed in Paris. It comprises a humorous conversation in front of a launderette, with the musician Adam Christensen, who gives a stunning solo performance elsewhere in the film, slumped in the front seat of a convertible in floods of tears. As a whole, this scenario pleasingly keys into the atmosphere of the nouvelle vague.

The heart of Deux Soeurs, however, returns its audience to the concerns of I Hope I’m Loud. In conversation with Balsom, the artist recalls that, during production, two crew members became pregnant. She responded to this coincidence by filming both women reflecting – one in French, the other in Portuguese – on their relationship to motherhood and the world. Gibson’s mastery of film is on show in these scenes. 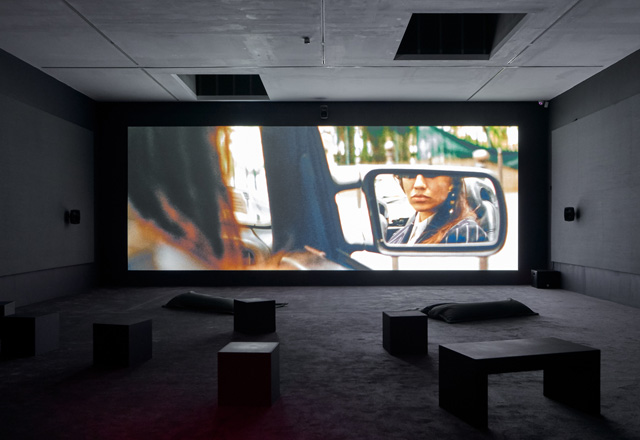 In an eerily prescient moment, we hear a voiceover state: “You always said ‘Brazil has a future’. But what could it be? This future has already passed.” This monologue on global migration and unrest, which is played over a cinematic headshot filmed in the Ridley Road bar, serves to locate the swirling violence that opens I Hope I’m Loud. Over the performer’s shoulder, a screen transmits an image of a heavily pregnant stomach. A beguiling sense of scale plays out, as the bar’s mirrored walls make it unclear – at least on a first viewing – whether this image is fitted to a small monitor or a giant billboard. This scoping effect stages the disorienting relationship between public and private that constitutes the speaker’s life. And in another moving sequence, a second woman fantasises about carrying her baby in a little bowl wrapped in clingfilm, only to discover on removing its covering that the infant has metamorphosed into a fried egg. “Well, I’ll just eat her,” she muses.

Following Stein’s model of a prolonged present, there is finally an argument to be made for reading the two films together. In which case, Deux Soeurs’ stories of motherhood illuminate the affective landscape of I Hope I’m Loud, providing direction for an experimental form of self-exposure that, taken alone, risks a private thinking. “I can’t imagine the mother I will be, nor the daughter you will be” is a line that could be delivered by the artist in I Hope I’m Loud to describe her own sense of anguish. That it belongs to one of the crew members of Deux Soeurs, who is excited about meeting her future daughter, is what creates the interval necessary for the show’s proposition to communicate formally.