After more than two years and a $12m makeover by architects David Gauld with Arata Isozaki, the Miami Beach museum of art has opened its doors once again. It’s more spacious and welcoming and has some ambitious work on show 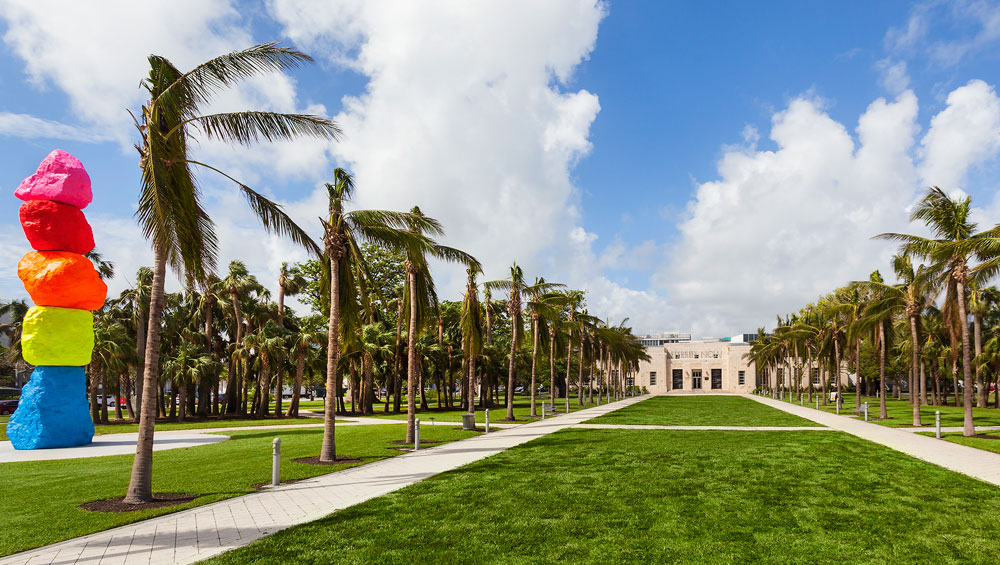 The Bass Museum of Art in Miami Beach recently reopened with a flourish after an extensive two-year, $12m (£8.92m) makeover, in time to welcome this year’s descent of art snowbirds into the city for Art Basel Miami Beach. The museum’s last major renovation was in 2001, when it added a second storey as well as a new wing designed by the master Japanese architect Arata Isozaki. This time, 86-year-old Isozaki acted as consultant to the project, which was led by former protege David Gauld who was also part of the 2001 team and has continued to collaborate with Isozaki since establishing his own firm. 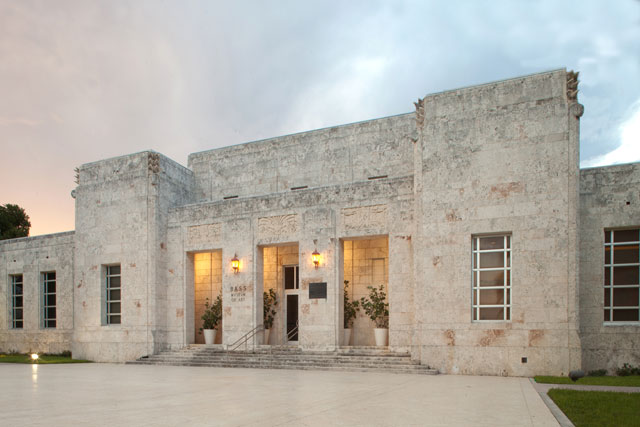 The Bass in Miami Beach. Photograph: Robin Hill / Courtesy of The Bass.

What this renovation accomplished is not immediately apparent, but is all the more commendable for its restraint in an age of (at times) unsustainable architectural excess. Its handsome art deco facade of sun-flushed limestone has landmark status and remains unaltered, as does its existing footprint. Only on entering is the transformation evident, the main ingress rerouted through the building’s art deco frontage, which faces Collins Park, the approach now much more impressive. 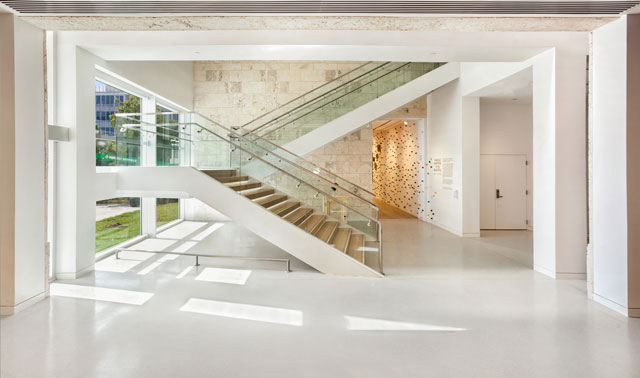 The architects, as if by the wave of a magic measuring tape, have ingeniously conjured more available space within it – and here’s how. It turns out that if the ramp that connected the ground floor to the upper level was removed and replaced by a more elegantly minimalised staircase, and if several underused outdoor terraces were enclosed and incorporated into the museum proper (native Floridians rightly prefer indoor air-conditioning to wilting summertime heat), an additional 4,000-plus sq ft would be found, expanding the Bass’s 8,700 sq ft of exhibition space by nearly 50%. 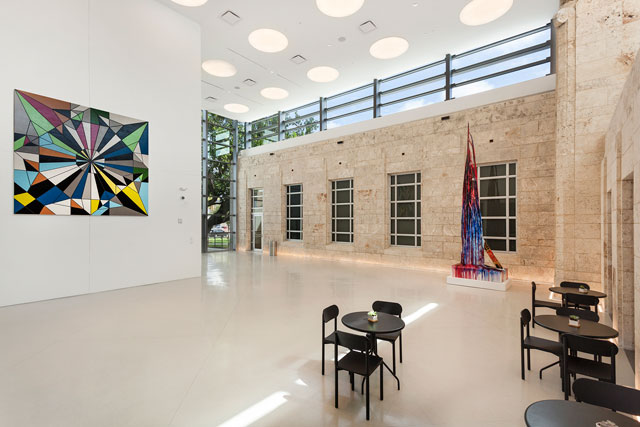 View of the new courtyard at The Bass. Photograph: Zachary Balber. Courtesy of The Bass, Miami Beach.

Keeping the limestone walls and bringing them inside contributes textural variation and warmth of colour, enlivening the interior’s pristine white walls. It is also cost-savvy, the Bass opting to direct its money more towards programming and acquisitions than towards the high cost and maintenance of a bigger, wholly new structure. 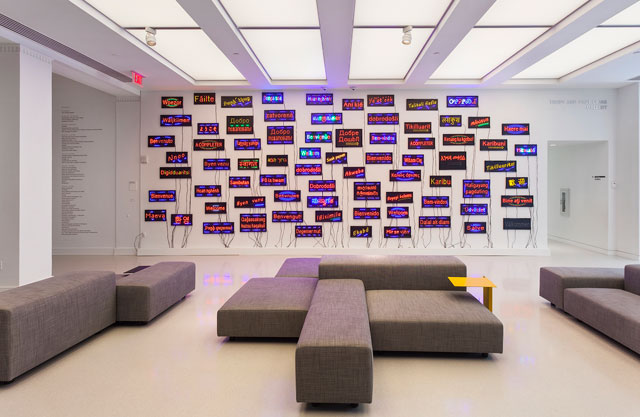 View of the new lobby and Pascale Marthine Tayou's Welcome Wall (2015) at The Bass. Photograph: Zachary Balber. Courtesy of The Bass, Miami Beach.

The new larger lobby is more gracious, with cushy seating to accommodate visitors. This welcome is reaffirmed by Cameroonian artist Pascale Marthine Tayou’s brightly coloured site-specific commission, Welcome Wall (2017), cheerfully streaming “welcome” in more than 70 languages via an installation of as many animated LED signs, a paean in praise of difference. Overall, space for four amply sized galleries, a cafe and a store has been found hiding in plain sight. Another innovation was to make some walls flexible to respond to the needs of different exhibitions. Upstairs, for instance, two galleries and a generous entrance vestibule can be shifted to form three galleries – as was done for Ugo Rondinone’s sublime exhibition, Good Evening Beautiful Blue, which surveys 30 years of his work and occupies the entire floor.

At ground level, one large space is given over to the museum’s historic collections and another to a series of temporary exhibitions and projects in dialogue with it. Since autumn 2016, the Bass has actively dedicated itself to the acquisition of contemporary art. (Among its first purchases was Miami Mountain (2016), a 42-ft-tall column of five stacked boulders in a blaze of fluorescent colours by Rondinone installed in the park, a stone’s throw from both the museum and the beach.) It is a shift to the contemporary that its executive director and chief curator Silvia Karman Cubiñá and board president George Lindemann both stated would be the Bass’s exclusive focus, extending to its exhibitions programme. 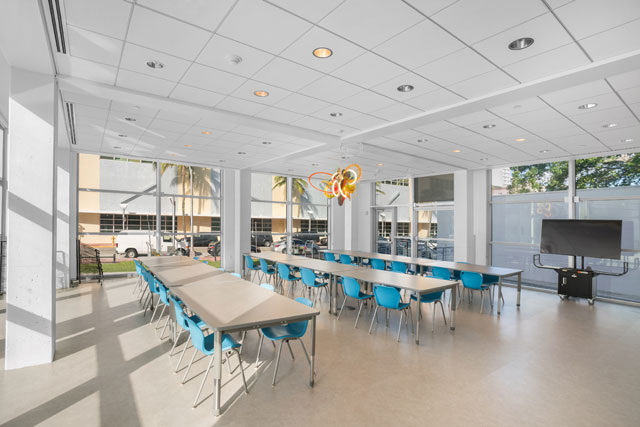 View of the new Waterview Classroom at The Bass Creativity Center. Photograph: Zachary Balber. Courtesy of The Bass, Miami Beach.

Cubiñá is also extremely proud of the Bass’s new educational facilities. Greatly expanded and light-flooded, they are now the largest in the county, with more than 5,000 sq ft and a 1,000 sq ft outdoor courtyard, their programming ramped up to underscore the museum’s commitment to local audiences. Educational departments are no longer afterthoughts – museums across the country have been doubling down on ways to engage and serve their communities better, which in turn will provide them with future audiences, friends and supporters. 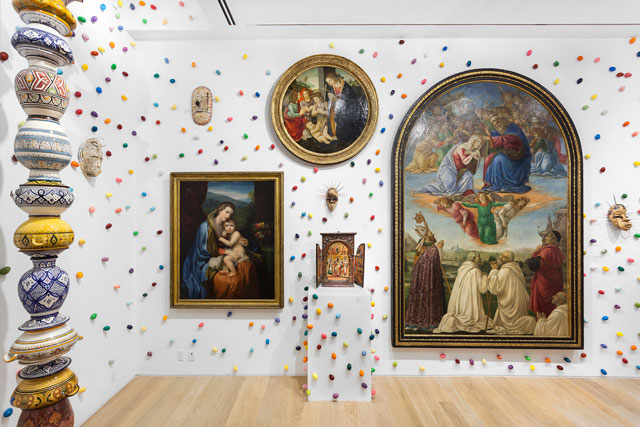 The work of Rondinone and Tayou, two highly esteemed artists of international repute, launched the new exhibition spaces with an onslaught of flamboyant colour. Tayou’s, on the main floor, was simply called Beautiful (a word that also appears in Rondinone’s title) and, indeed, it was. It included his Colonnes Pascale (2012), an exquisite series of six stacked pillars of Arabic pots, his Fresques de Craies, reliefs made of countless broken pieces of coloured chalk and, most beguiling, his mixed media interpretation of ritual objects that have become mere tourist souvenirs, revalidating them as highly covetable artworks. He also introduced his production into the permanent collection, the project initiating a complex conversation about colonialist pasts and globalised futures, connections and ruptures. 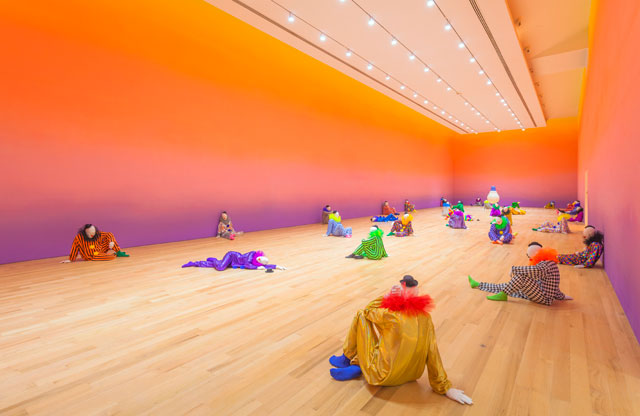 In the upper galleries, Rondinone’s coups de théâtre greet the viewer, beginning with a series of 52 translucent rainbow-paned windows (one for each week of the year) and whitewashed newspapers. But Vocabulary of Solitude (2014), in the principal space, is the showstopper. The gallery’s towering walls are painted to resemble the tremulous, gradated rosiness of an otherworldly sunrise or sunset. Populated by 45 life-sized clowns in ornate costumes, all different, they sit, stand or lie down, engaged in a variety of mundane tasks. Their painted faces are unsettling in their withdrawal – they seem enclosed in a kind of isolated solipsistic aura, although the body language is more eloquent – the poignancy deepened by their proximity to others like them yet disconnected from them. 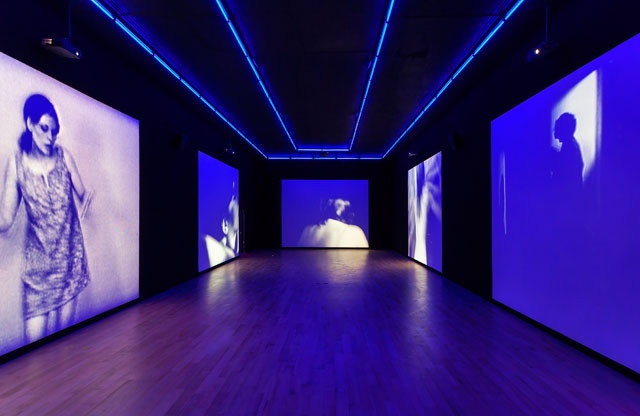 In the adjacent gallery, It’s Late … (1999-2000) is playing. This infrequently seen six-channel video installation is mesmerising in a more languid way, its grainy blued monochromatic images feel far off, as if in a reverie, in contrast to the colourful pageant of the clowns.

An ambitious third exhibition features video artist Mika Rottenberg and includes NoNoseKnows (Artist Variant), which made its debut at the 2015 Venice Biennale. Also on view is Cosmic Generator, her project for this summer’s Skulptur Projekte Münster. An absurdist critique of late capitalism, it opened on 7 December to coincide with Art Miami Basel and is showing until 30 April 2018.

The Bass, it seems, is more than ready for its next act. 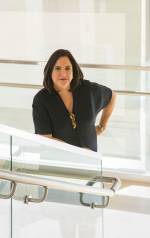