Art in the Making: Degas

Art in the Making: Degas

Degas said of himself that he would like to be 'illustrious and unknown', and he succeeded; by 1900 his paintings were among the most sought after and expensive works of contemporary art in the world, while he himself remained a life-long bachelor, living alone with a housekeeper and leaving behind no evidence that he ever enjoyed an amorous relationship. Very late in life his eyesight all but gone ... Degas's proverbial charm seems to have abandoned him, a universal anger and disdain to have taken its place ... he end[ed] his days in Lear-like fury and solitude was his tragedy.1

Degas's extraordinary artistic career is examined at the National Gallery in London. It is a scholarly exploration of method and material; and pays tribute to his brilliant draughtsmanship in drawing and pastel, revealing his skill as a technician who experimented greatly. He also became one of the most discriminating collectors of his day. In his art Degas created quintessential images of modern life in Paris which recall Henry James's notion in The Ambassadors, 'all about imagining that you couldn't possibly be anywhere else'.2 Degas did not paint images of bustling boulevards and fête galante, rather he chose mostly interiors (the racecourse works are the exception) using artificial light and theatrical, architectonic spaces. Decorative line, stark division of space separated him from his Impressionist contemporaries.

In the ballet world he created perhaps the most captivating images of women, producing hundreds of works of dancers and a single small sculpture: 'Little Dancer aged Fourteen', (1881) was cast in bronze after Degas's death. Degas produced some 150 sculptures but he did not show them. Pastel was important, indeed pivotal for Degas for whom experimentation, re-working, intense pure pigment were vital. He took up photography too, achieving masterful images with light and shade. Degas was personally enigmatic and technically complex.

At the National Gallery in London, the concept of exhibitions that explored the thought processes and skills of the artist began in 1988. The series of 'Art in the Making' ran until 1991, the year of the groundbreaking exhibition 'Art in the Making: Impressionism', which delved into the working and materials of the French Impressionists. Given the Gallery's holdings of works by Edgar Degas, one would have expected to find numerous examples of his work there. It was, however, the sheer variety and complexity in Degas's oeuvre, and the wide range of methods and materials employed that led curators at the National Gallery to consider Degas a special case. Instead of using their collection of his work in their important 1991 exhibition, a decision was made to do significantly more research and to assemble, from museums and galleries around the world, a truly comprehensive exhibition of Degas's work.

The new series of 'Art in the Making' exhibitions began last year (2002-03) with 'Underdrawings in Renaissance Paintings'. This winter (10 November 2004-30 January 2005), 'Degas' is the culmination of years of work by a team of conservators, curators and scientists. Focus is on the Gallery's own paintings with a small number of key works from other museums. Although this is a small exhibition, it has been researched and curated to a standard of excellence with a fine accompanying catalogue. The juxtaposition of sketches, working drawings, X-rays of the paintings, pastel works, infrared photographs, presents the working methods in a detailed and accessible form.

The history of the acquisition of works by Degas, and those owned by him, forms an interesting sub-text to this exhibition and illustrates English attitudes to European Modernism. The events that enabled the National Gallery to buy works by Degas were preceded by the acquisition of a part of Degas's private collection which, at the time of his death, included several Old Masters and mostly 19th century French works. He had, for example, 20 paintings and 88 drawings by his teacher Ingres and 13 paintings and 129 drawings by Delacroix. Of his contemporaries he owned works by Corot, Manet, Van Gogh, Cezanne and Gauguin. In addition he owned many other drawings and graphic works by significant artists. Although the elderly Degas initially attempted to record and document his collection in the 1890s with the view to establishing a small museum, by the last five years of his life he was living in Montmartre as a virtual recluse. The works were piled against walls or stored, with only a part of his collection actually hung. After his death the collection could not be preserved and was subsequently sold in two parts in March (his collection) and May 1918 (his own work).

Roger Fry, the champion of modern French art in England who put his reputation on the line as scholar and connoisseur when he organised two exhibitions of Post-Impressionism in London (1910 and 1912),3,4 received possibly the only copy of the sales catalogues from Paris. Without his intervention the British public would not have benefited at this poignant moment in art history. Roger Fry's Bloomsbury friend, John Maynard Keynes had a temporary job at the Treasury during the war and was instrumental in the National Gallery's key acquisitions from the Degas collection. Keynes approached Sir Charles Holmes, asking him to liase with Lord Curzon, a Trustee of the National Gallery and member of the Cabinet. The result of this fortuitous connection and foresight was the equivalent of £20,000 transferred in francs to the British Embassy account in Paris, the acquisition grant at the National Gallery having been withdrawn at the beginning of the war. The conscious collecting of 19th century painting by the National Gallery really began with purchases from the private collection of Degas in March 1918, from which it bought 13 paintings, including work by Ingres, Delacroix, Corot, Gauguin, and Manet. It was realised that Degas's work too should be collected but the process turned out to be a slow one, characterised by a key missed opportunity.

Since around the turn of the century, the National Gallery had been singled out for criticism for its lack of interest in modern European painting. In fact, its constitution meant that it could not buy or accept works by living artists and according to the critic Frank Rutter, the National Gallery Trustees had refused the offer of a painting by Degas in 1905. But on the other hand, it had not even attempted to acquire works even by dead artists such as Manet, as these were felt to be too advanced in style and not appropriate for a collection which was perceived to be of established Old Masters. The National Gallery's sister institution, the Tate, had been established in 1897 as a collection of contemporary British art, and during the 1900s housed all the Gallery's 19th-century paintings ... Although no attempt was made to add to them, there was a growing awareness that Britain lacked a clear policy regarding the acquisition of modern foreign art.5

Roger Fry's exhibitions of Post-Impressionism of 1910 and 1912 created a furore, and revealed the vehemence felt by the English public towards 'modern' art and yet Degas was one of the first French artists to find favour in England; indeed his works sold extremely well in London to a varied clientele. By 1918 a number of works by Degas had entered public collections (Victoria and Albert Museum, Dublin, Tate). In 1893, DS MacColl described Degas as 'the greatest living virtuoso of drawing' (The Spectator).'6

It was perhaps Degas's supreme ability as a draughtsman which brought him into such favour in this country. At the sale of his collection the predominance of pictures by other noted draughtsmen gave authority to his own skill and awakened in the authorities the realisation that this artist was vital to the national collections.7

The buyers on behalf of the National Gallery, underestimated the high prices that the second Degas sale in May 1918 would reach. The gallery put a limit of £600 for any one picture. Because the work in Degas's studio was not representative of his entire oeuvre, and some were unfinished, only five picture were considered to be of paramount importance. Further, the Treasury did not wish to spend its limited funds on a pastel, given its fragility; Roger Fry, however, believed that this policy was tantamount to a great missed opportunity. So, although the National Gallery was in agreement in wishing to acquire works by Degas, they were divided as to which should have been bid for, and they underestimated the interest in the sale. Not a single picture was bought with the Treasury Grant. The National Art Collections Fund was only able to buy one which was presented to the Tate. Private collectors bought a third and presented it to the Tate in 1919. Had the Treasury grant been free of limitations, it might have acquired significant works. The next Degas to be acquired by the National Gallery was not until 1937 ('La Coiffure', 1896) which Lord Curzon had crossed off the shortlist in 1918, for being, in his view, 'too coarse'.8 Roger Fry was privately distressed at the failure of the British buyers to acquire such 'magnificent' examples of Degas's work; his choices had largely been ignored (letter to Vanessa Bell, 6 March 1924).

A breakthrough for British collections came with the vision of industrialist Samuel Courtauld, who in the 1920s gave £50,000 specifically for the purchase of Impressionist and Post-Impressionist paintings for English national collections. Degas's, 'Young Spartans Exercising' among other works was bought in 1924.

Courtauld's generosity meant that artists such as Degas, Manet, Renoir, Cezanne, Monet, Van Gogh and Gauguin were now well represented in the national collection, some for the first time. Courtauld himself specified the list of artists whose work could be bought, and he gave Impressionist landscape a central place in the modern movement, unlike many English critics such as Roger Fry (and indeed Degas himself). Frank Rutter had even gone so far as to say that Impressionism, with its sketch-like qualities and concern with surface appearances, had never been popular in England. But for many others, Degas's rigorous draughtsmanship and sense of design held him apart from Impressionism. In his case the Courtauld purchases can really be said to have put the official stamp of approval on his art.9

The Degas collection at the National Gallery was increased when the National Gallery and Tate Gallery Act of 1955 enabled paintings to be regularly transferred between the two museums. Most pictures bought with the Courtauld Fund ended up in the National Gallery. Degas works included in the rationalisation were: 'Princess Pauline de Metternich', (c.1865), 'Beach Scene', (1869-70), 'Young Spartans Exercising' (1860), 'Miss La La at the Cirque Fernando', (1879), 'Portrait of Elena Carafa', (c.1875) and 'Ballet Dancers', (1890-1900). Purchases and generous gifts have increased the collection steadily over the past forty years, the most recent being the pastel, Russian Dancers, (1899) in 1999. In addition to the astute analysis from artistic and scientific perspectives, the exhibition marks 85 years since the pivotal Degas sale of 1918, and reveals the complex process involved in establishing a national collection. 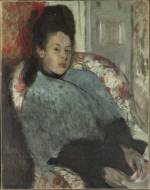 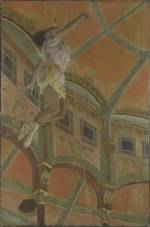 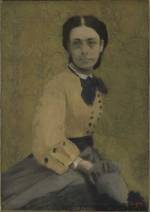