Hit the refresh button! Just as the fair that 17 years ago rebranded Miami as an art hub began sitting on its laurels, a series of concurring innovations has now rebranded the fair 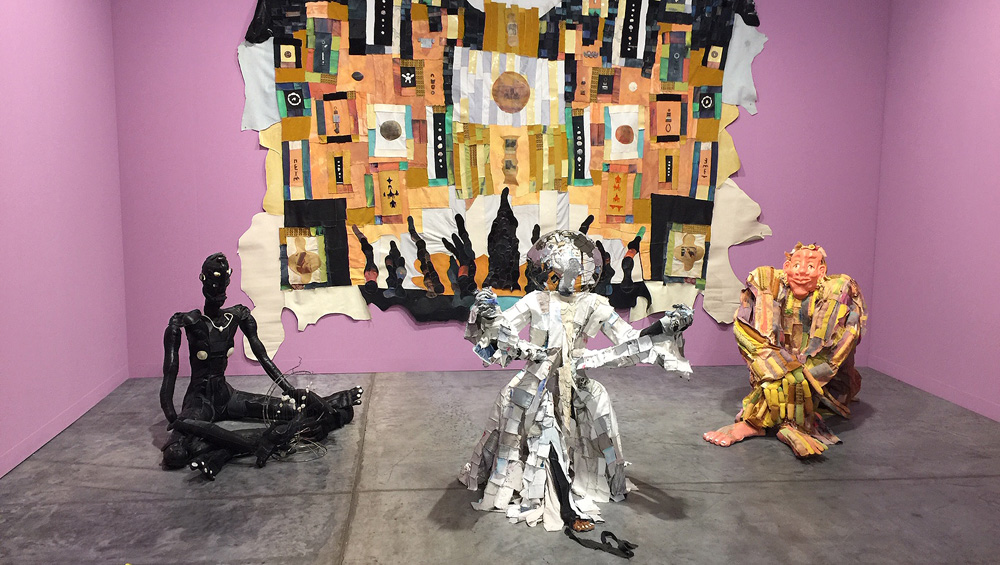 Art Basel Miami Beach was beginning to tire. Circling in on itself within the context of swirl, with it unpacked the same four-day formula of Convention Hall blue-chip art versus scrappy mainland/beach tent-art, whose only uncertainty was whether an Uber would be available to ferry you between them. But on 5 December, presto!, iteration 2019 arose, if not from whole-cloth, from a major rethink and two great gifts to the city – one heroic.

Jewel in the crown, the big daddy ABMB fair slots so gracefully into the Convention Hall’s doubled space as to make navigating it seem like a walk in the proverbial park. It helped that the VIP list was inexplicably truncated (presumably of drifters with big names but small wallets, though I never got a straight answer), leaving the art to breathe, space to manoeuvre, and no opening-bell race down narrow aisles to put work on hold (though I noted a goodly number of red dots flagging heretofore discouraged pre-opening sales). 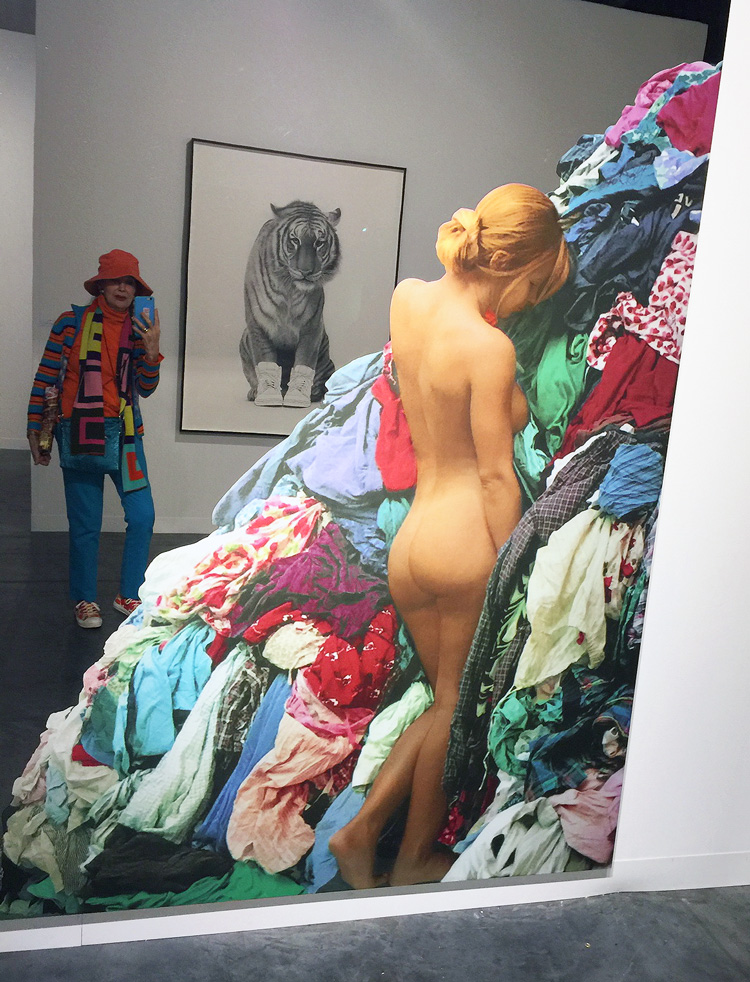 The addition of 20 new galleries, bringing the total to 269, presented a great deal to see, with, as ever, a range from magnificent to nonsense, and a new sliding-scale price system offering something for all budgets. What has morphed art-wise, together with last year’s buzzwords, is the vibe. Trend has ceded to “diversity”, fashion to “moment”, hot to “urgent”, authentic to “sincere”, investment-worthy to “I LOVE IT!” and, putting paid to “female artists”, the bulky “women-identifying artists”. 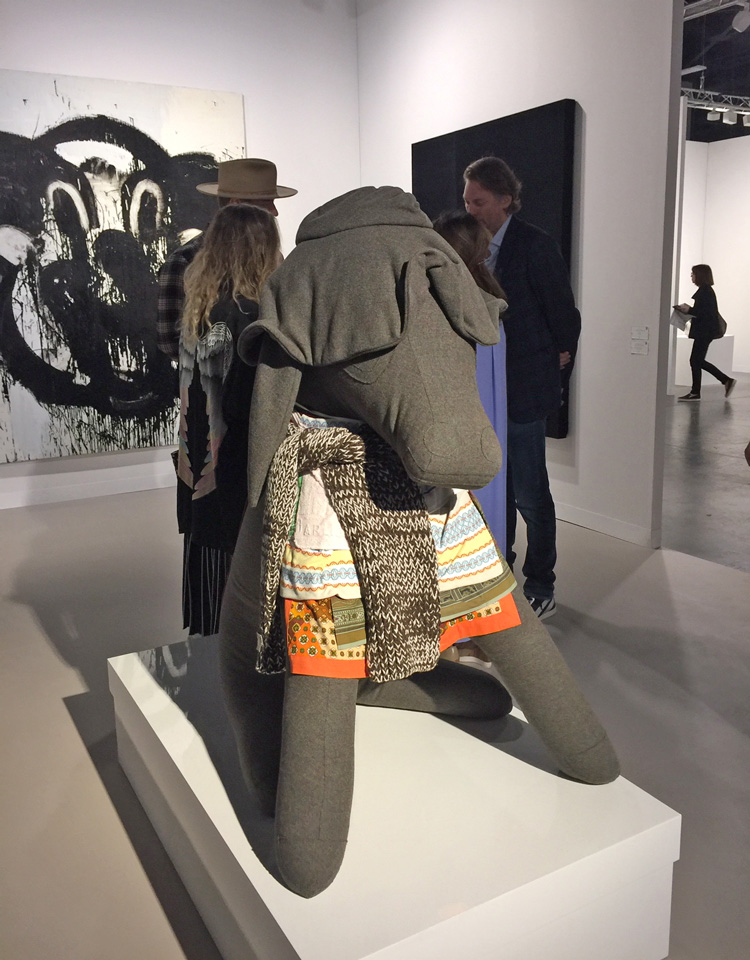 This latter is unnecessary as female artists – whether “revisited” (like Howardena Pindell, pulled to long-deserved fame) or rustled up to provide the now necessary quota – more than held their own in both the blue-chip and young galleries. Standouts were Teresita Fernández, native to Miami, with two cut-brass wall pieces here and a concurrent solo show at the Pérez Art Museum Miami; Portia Munson’s apocalyptic fantasy garden; Andrea Bowers’ tongue-in-cheek Let Boys Be Feminine/Sensitive; Cosima von Bonin’s deceptively endearing felt and velvet compositions; and Mary Weatherford’s commanding abstract canvas at Gagosian.

Video seems on the wane – though perhaps thin here only because it calls on a slow pace to digest - but chemical photography abounded, much of it “interdisciplinary”, overlaid with paint, digitally manipulated, or worked into collages. 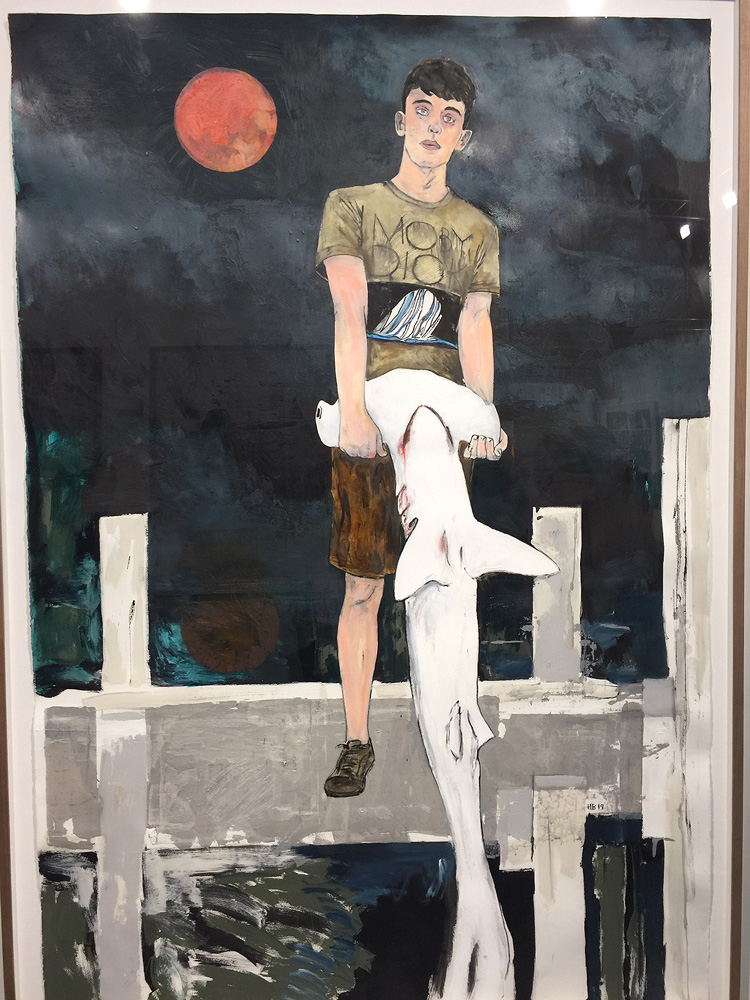 Making the case for the enduring power of painting on canvas, work by veterans Al Held, Peter Halley, Philip Guston, Carroll Dunham, Peter Saul and Alex Katz sold the first day, as did every painting by “lost-boy” artist Hernan Bas in his stellar solo presentation at Fredric Snitzer. Enjoying a “moment”, Albert Oehlen showed up at three galleries here, at two of the satellite fairs and front and centre at Rosa and Carlos de la Cruz’s open-house annual viewing of their restocked private collection. 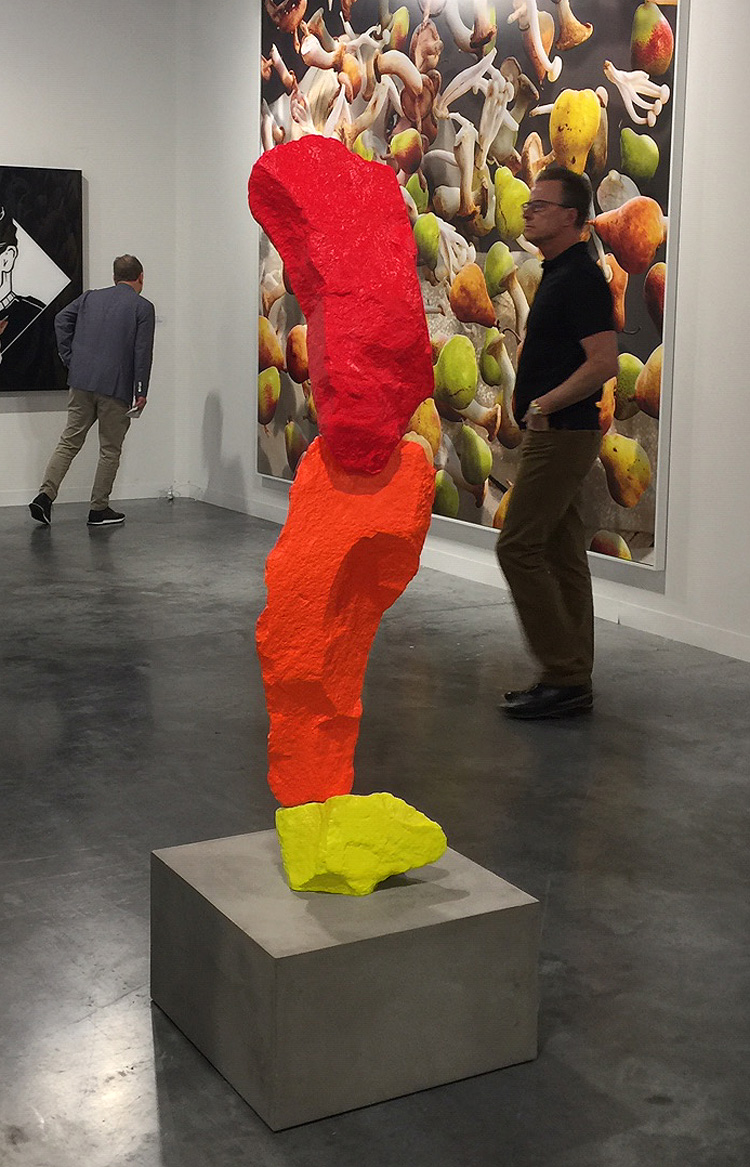 Prevalent everywhere, almost themed, great swathes of colour pointed to new possibilities. Thickly layered or thinly washed; poured, brushed, sprayed or splashed; applied to canvas, bed-sheets, plaster, bronze, metal and stone, bright fields of colour deployed as a visual language served as investigation, reformulation, and catharsis. Glowing like embers at Cheim & Reid, a storied Sean Scully aluminium sculpture; beaming like a lighthouse at Sadie Coles, a signature Ugo Rondinone DayGlo-painted rock; pulling a steady stream of viewers to Metro Pictures, a vivid portrait by André Butzer. Colour has always been a draw, but it spoke to so many younger artists showing here as to suggest its revisited value as a tool of emotional expression.

Textiles, now reframed as “thread” to incorporate new fibres and technologies, informed an impressive number of works, ranging from Raqib Shaw’s gold-stitched paintings to a gripping wool tapestry by Kara Walker overlaid with one of her signature silhouettes hand-cut from felt. 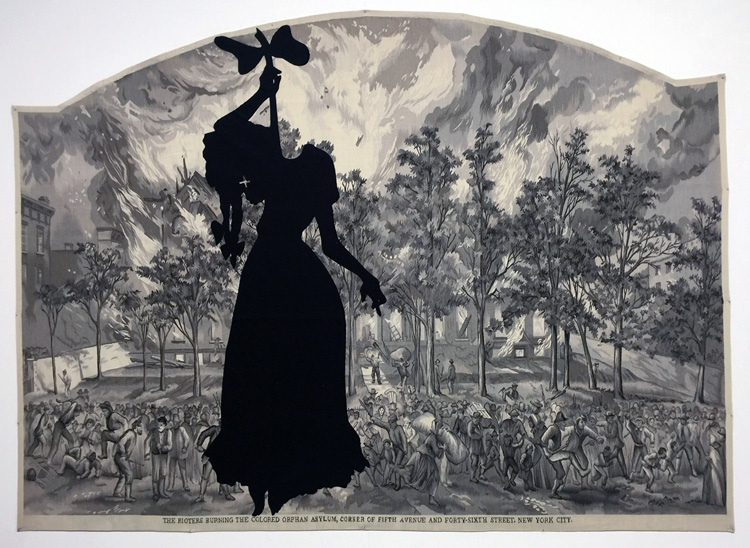 Marble is having a moment – fallen out of grace as the paradigmatic material, it has been reinvigorated by Jaume Plensa’s monumental heads, represented here by two galleries, and helming a flurry of less successful marble statuary scattered throughout. 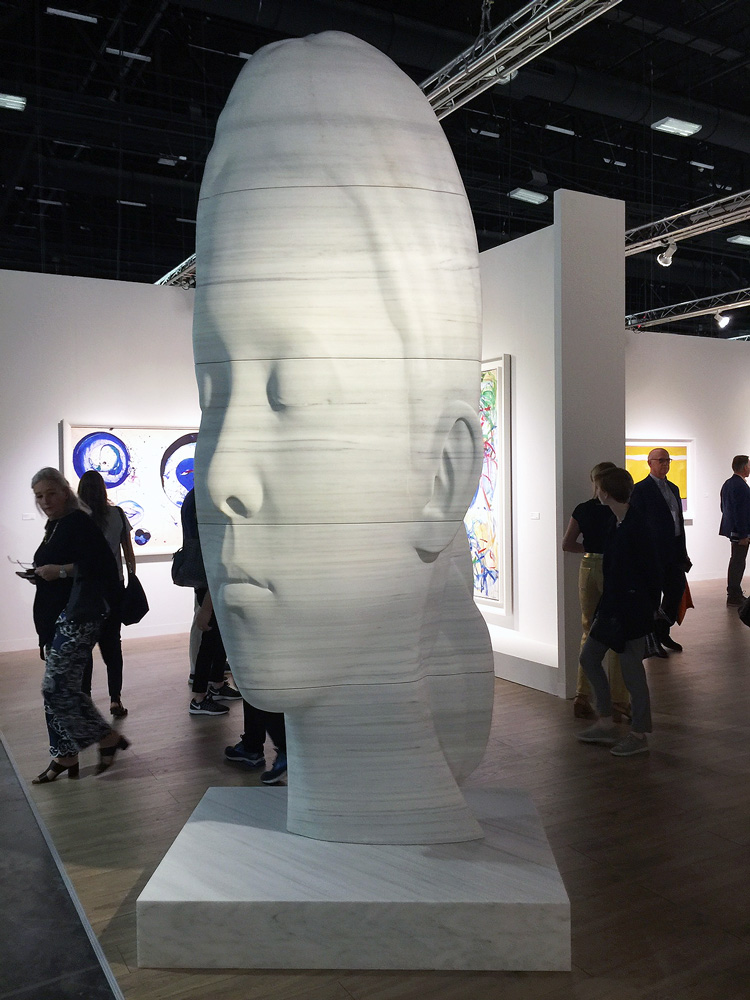 Enjoying more than a moment, ceramics pervaded the galleries. It has been a long time coming – 46 years since the artist Deborah Butterfield recalls being belittled by alpha classmates for being, good grief, a potter! Revived by Sterling Ruby, who is showing a body of work simultaneously at Miami’s Institute of Contemporary Art, the medium has been taken up by artists working across disciplines as a malleable, hands-on material to address blatant social issues. 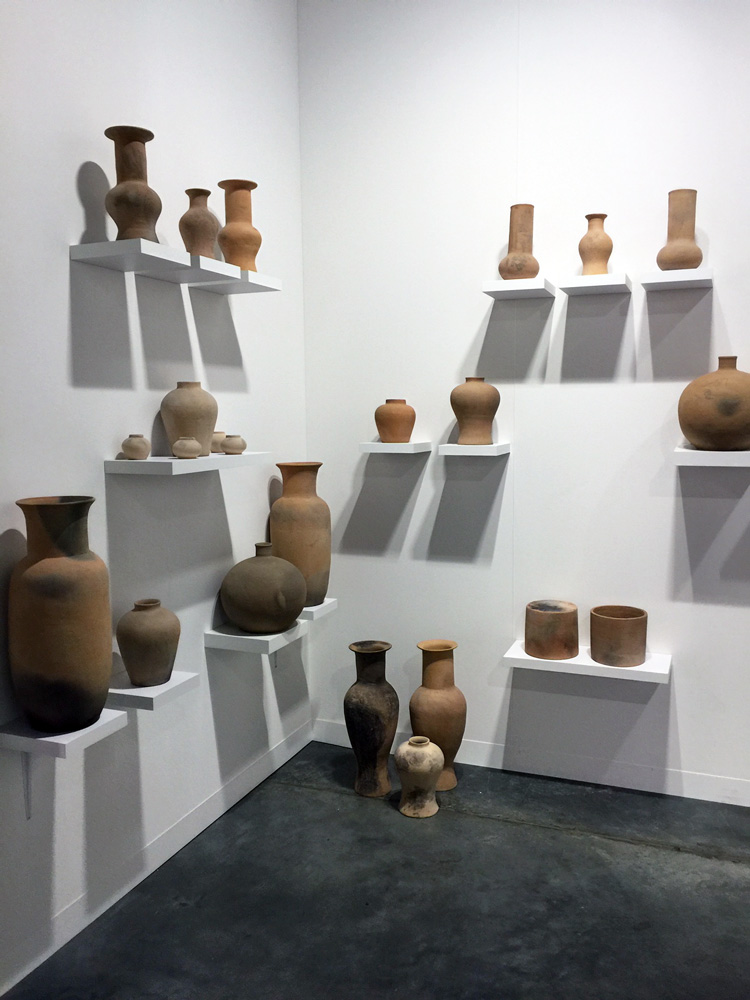 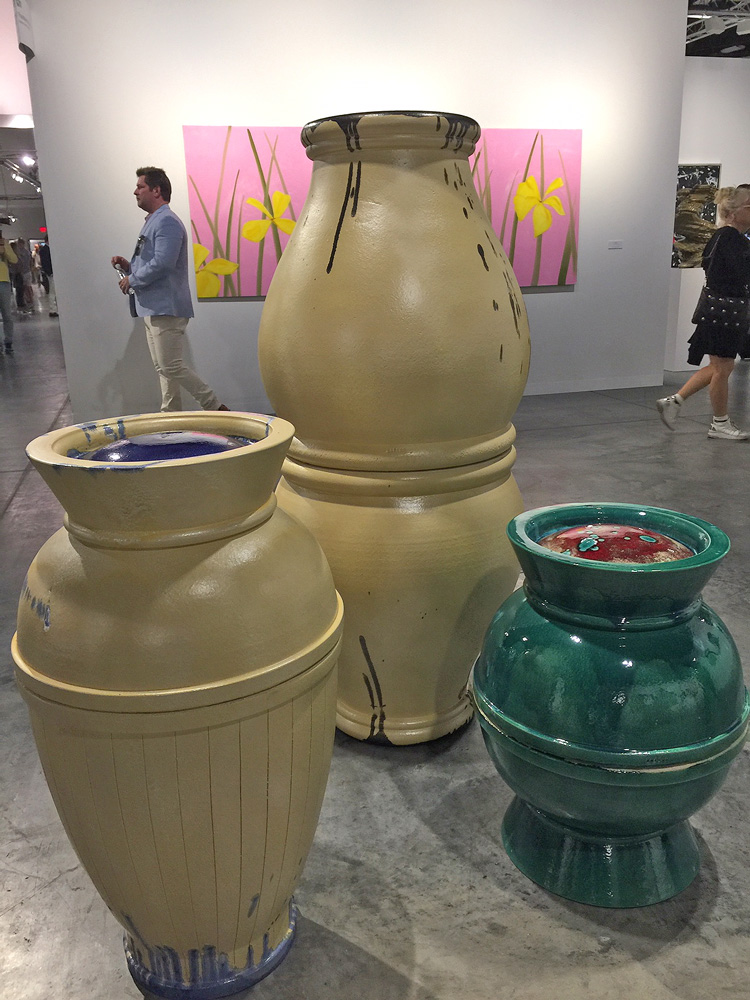 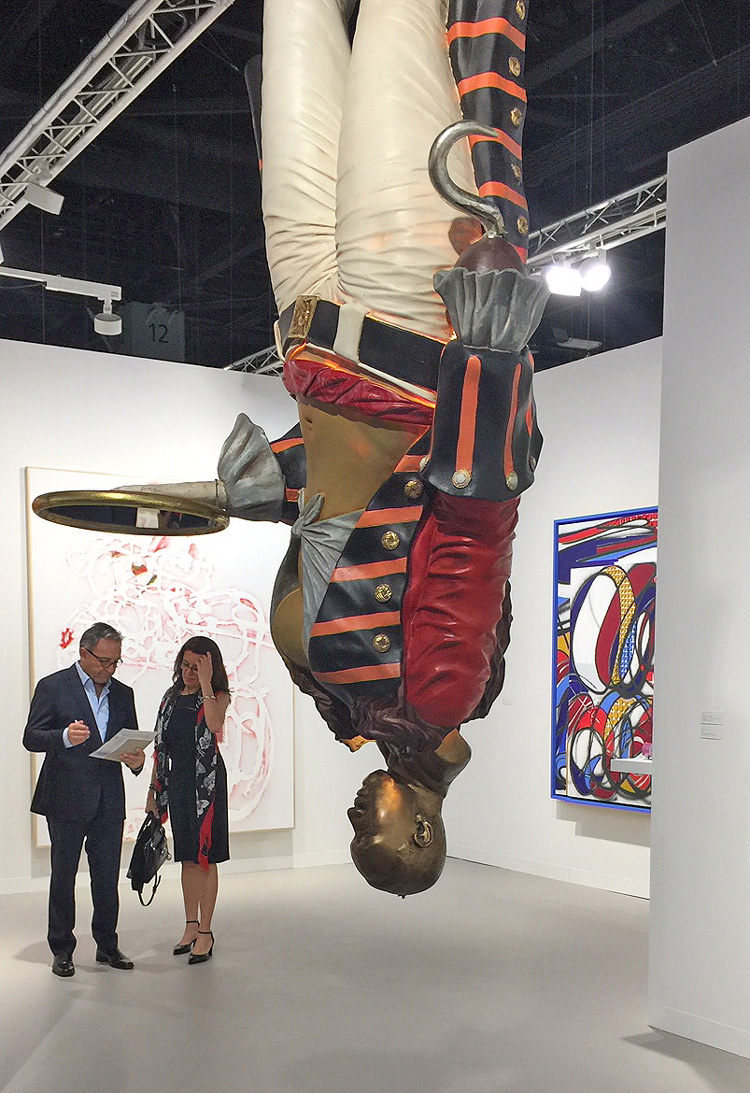 Black is on a swift trajectory to the prevailing no-colour. Strongly featured last year as apology, repentance and the new must for dealers and collectors at the cutting edge of what matters, artists of colour now present as established. Just as African-American concerns with racism, bondage and blackness are now considered art-worthy subjects, revisionist history has combed the diaspora for collectible narratives of oppressed peoples across the globe. 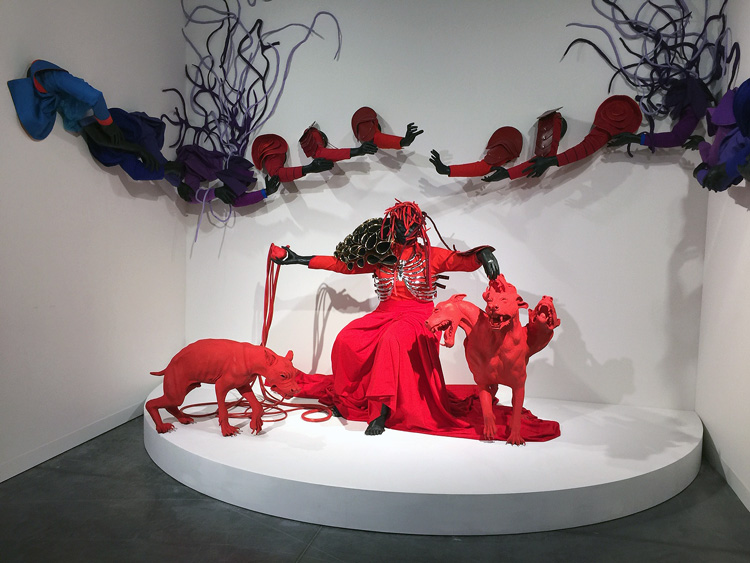 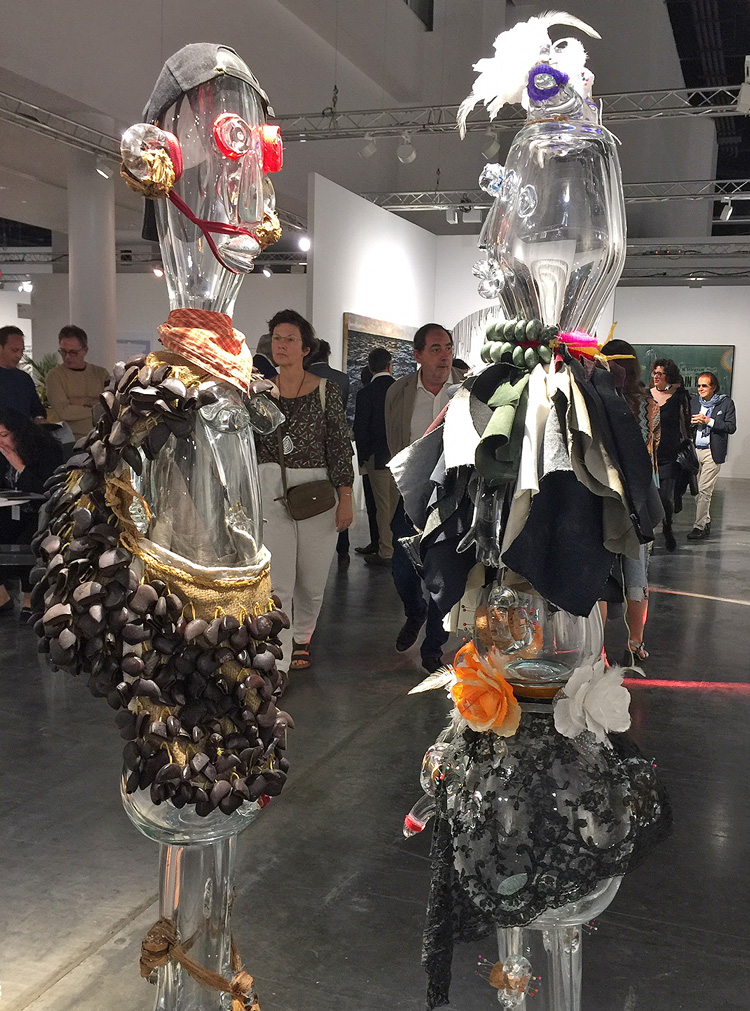 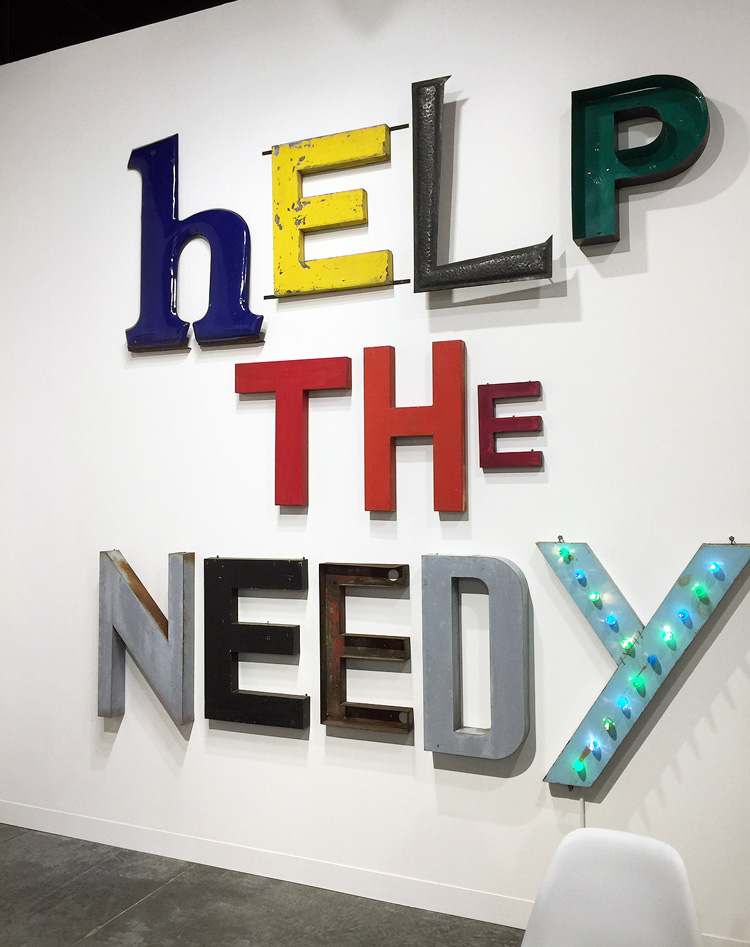 Political statement was largely muted – indicating either collector fatigue or gallery wariness, after the controversial dust-up at this year’s Whitney Biennial and protest overload at the Venice Biennale. Work you can live with tended to word pieces; Jack Pierson’s Help The Needy at Cheim & Reid; Gardar Eide Einarsson’s blooded Hey, Iran! (2017) and Superflex’s We Are All in the Same Boat, both at Nils Staerk; and at the Paula Cooper Gallery, Carey Young’s stinging comment on the Trump administration’s immigration policy. 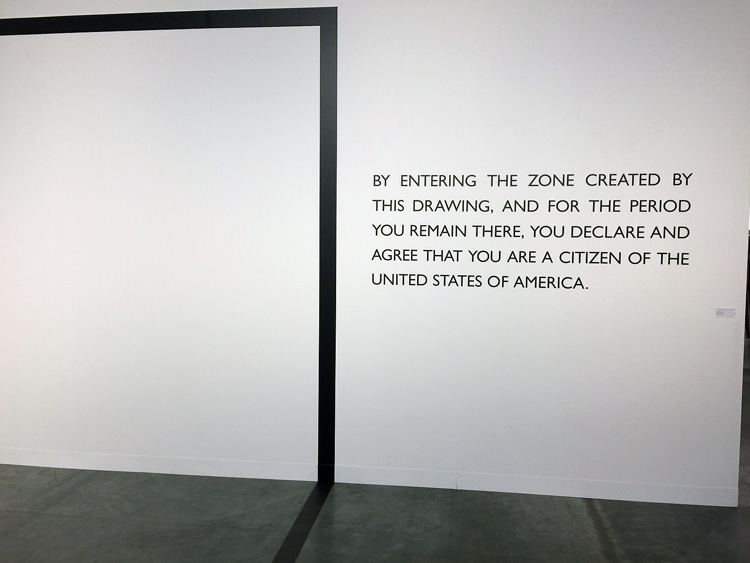 Let nonsense be represented by the cheeky Maurizio Cattelan, whose real-life banana duct-taped to the wall – edition of three (plus two artist’s proofs), which sold the first day for $120,000 each – might just possibly have qualified as conceptual art, had he not flubbed his initial attempts to produce them in resin, then bronze, a fizzle rescued by the artist as a joke on the collector, though not on the public, whose frenzied selfies with the rotting cause celebre shut it down closing day. 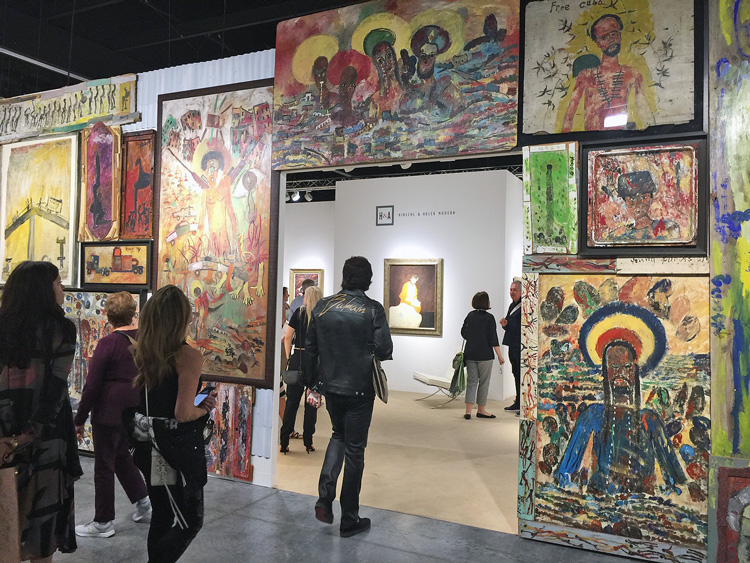 What else? What not else? Impossible to report back on all the satellite fairs, popups, beach installation, and street performances that I came across. My I LOVE ITs were: Hirschl & Adler’s entire booth entrance coated with exuberant paintings by one-time outsider artist Purvis Young; Tom Friedman’s Cocktail Party at Meridians, which danced 26 disparate people together at one of those brilliantly rendered meet, greet, goodbye, never to reassemble festivities; a beach sculpture by Ruben Millares and Antonia Wright that hoisted 15 flags of nations challenging immigration up one pole and ran them upside down on a connecting one, inviting police intervention to rescue the US flag from inversion; an ice sculpture by Brazilian artist Rubem Robierb spelling out the words How Dare You from environmental activist Greta Thunberg’s speech to the UN, which slowly melted into the hotel pool, as all of Florida is quietly sinking into the sea. And, showing off-site at the Fredric Snitzer Gallery in anticipation of his solo show at Miami’s ICA, Tomas Esson’s radiant canvases, entrenching the newly ennobled conjunction of “abstract” and “black” artist.

The heroic addition I referenced – a stunning gift to Miami – is the Annabelle Selldorf-designed Rubell Family Museum that launched the day before ABMB, a 100,000 square-foot warehouse complex showcasing a rotating collection of more than 7,200 artworks, including Yayoi Kusama’s Mirror Room, free admission all week with the ABMB VIP pass. Such is its reach, however, that – together with Jorge’s Peréz’s new space, the neighbouring and concurrently opened El Espacio 23 – it rates more than a paragraph. Stay tuned. 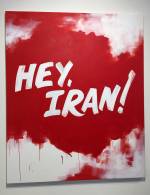 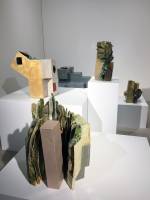 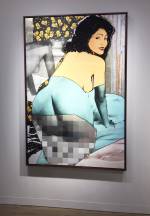 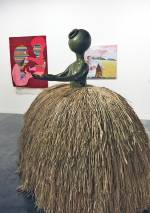 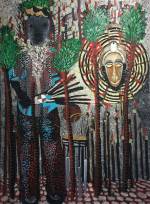