The Ars Electronica Festival 2016: Radical Atoms and the Alchemists of our Time 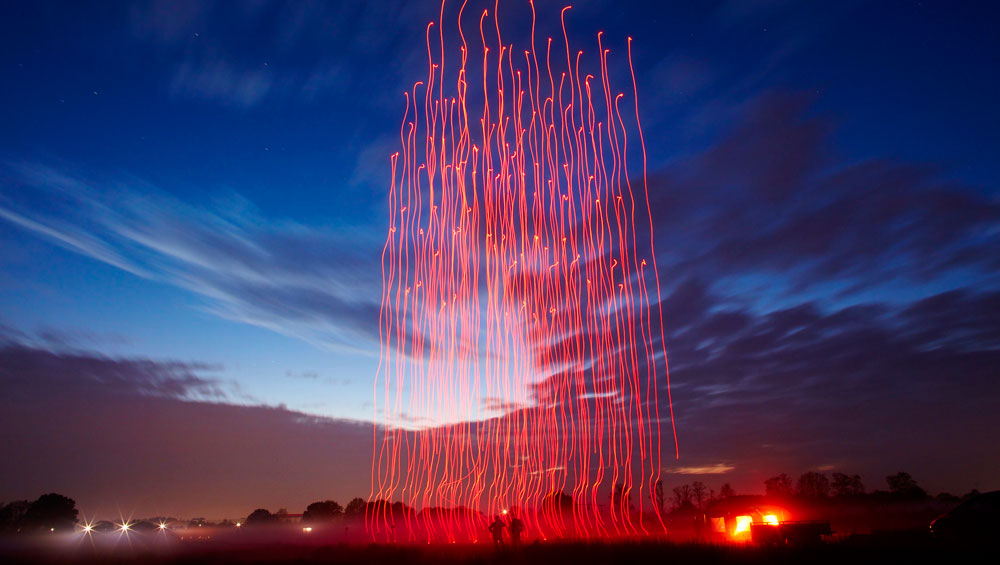 The Ars Electronica Festival 2016: Radical Atoms and the Alchemists of our Time

This year’s festival includes more than 30 exhibitions, around 20 concerts and visual art and sound performances each day, an open-air drone show, plus symposiums, lectures and workshops

Ars Electronica, which has been combining art, technology, science and society for 37 years, opens its 2016 edition this week with the theme Radical Atoms and the Alchemists of our Time. The festival will include more than 30 exhibitions and around 20 different concerts and visual art and sound performances each day, including an open-air drone show, in addition to symposiums, lectures and workshops open to the public. There will be hundreds of events taking place during the five days. The main location will be PostCity, an enormous industrial building previously used by the postal service to distribute parcels. However, the festival will be spread around Linz, both downtown and along the Danube’s riverside, involving the whole city. Besides PostCity and the Ars Electronica Center, other venues will be the OK Centre for Contemporary Art, the Central Linz Cinema, Lentos Art Museum, the Linz Art University and even St Mary’s Cathedral.

Considered one of the most important events of its kind in Europe, and possibly in the world, the Ars Electronica Festival debuted in Linz in 1979. Co-founder and journalist Hannes Leopoldseder recalls that it was a period when the city was characterised mainly by its industrial development, with almost no attention paid to culture. The second world war, he says, had left a wound and the city was in a cultural crisis. As he explains, because Linz is situated between two artistic centres, Vienna and Salzburg, people from Linz used to go to other places in search of culture. It was a time when Linz was striving to rebuild its own identity, not looking to the past but gazing towards the future. Culture was the main driving force to achieve this.

At the time, Leopoldseder was the manager of a regional broadcast service in Austria. His boss asked him to come up with ideas to make the network an agent for culture, rather than just producing television and radio programmes. Leopoldseder, whose journalistic background was in politics rather than the arts, spoke to a friend, musician and composer Hubert Bognermayr, who came up with the idea of a festival for synthesised music. From this starting point, the two friends, alongside cyberneticist and physician Herbert W Franke and producer Ulrich Rützel, proposed to the mayor and authorities a festival of what they called “Electronic Arts”, with symposiums and lectures that would bring together around 20 scientists and artists to discuss “What will society be like in the rapidly approaching 21st century?” For the first edition of the Ars Electronica festival, Leopoldseder invited the people of Linz to participate by putting their radios on their windowsills to turn the city into a big electronic orchestra. The organisers also had the idea of making a robot to deliver the opening speech, and the high point was the Sound Cloud, an open-air multimedia performance of huge proportions in the sky. It was a remarkable start that led the event to be repeated, initially on a biennial basis and then annually. Since then, the festival has grown in size and the spectrum of topics has greatly expanded.

In 1982, Peter Weibel, one of the most prominent artists and theoreticians in Austria, became the festival’s artistic consultant, and from 1992-95 he was its artistic director. Weibel assisted with the festival’s consolidation as the perfect platform on which to discuss contemporary society through the relationship between art and technology. It was also in this period, in 1987, that the Prix Ars Electronica began, an international competition that, through an open call, gives awards for original art pieces or innovative technological ventures. In 1996, media artist and engineer Gerfried Stocker took over from Weibel as artistic director and expanded the scope of Ars Electronica even further. In fact, he turned it into a hub and a meeting point throughout the year and not only during the festival. He inaugurated a brand new museum facility, the Ars Electronica Center, in 2009, and launched enterprises such as the Futurelab, an atelier-laboratory where artists, coders, scientists and other professionals can work together on a wide range of projects focused on an economically sustainable model. It was not by chance that by 2014 Linz was designated a Unesco City of Media Arts.

Martin Honzik, head of the Ars Electronica Festival and responsible for supervising the hundreds of events across the five days, says the prime location of PostCity is a highlight of this year’s edition. The former logistics centre of the Austrian postal service, it has retained its 12 metre-tall spiral chutes, a railway for the transportation of packages and even a bunker.

“PostCity itself has a unique story to tell,” says Honzik. “It is a huge place measuring about 80,000 sq metres.  It is the second time we have centralised the main sections of the festival there. Suddenly, I can act almost as someone from the world of theatre. I need to understand the function and intelligence of the space, and then I can create a new world. It is a very sweet challenge.”

‘This alchemist’s topic will lead to a myriad of interpretations,” says Honzik. “Who are they? Who are the people in the future, or in our present time, who have this attitude to being a pioneer? Who has this toughness to think? Who will design the studio or the laboratory of tomorrow, and what will they look like? Who are their peers, what are the collaborations going to be like, or how will the models work together? The festival always has this ambition to take a half-step into the future. The aim is to show and discuss those issues that are still ahead of us,” he says.

Without losing sight of the ideal of forecasting the future, but also now, after so many years, maintaining its own traditions, Ars Electronica will once again present an event that promises to blow people’s minds away. Among the many attractions during the festival, such as a spectacle with 100 drones on Saturday night, the Big Concert Night with the Bruckner Orchestra on Sunday, performances, theatre plays, film screenings, symposium panels and workshops, Studio International has picked out some of the highlights of the main exhibitions. Also, you can find the whole programme here.

CyberArts Exhibition: prizewinning works of media art and the Prix Ars Electronica forums at the OK Centre for Contemporary Art and OÖ Kulturquartier

Already a tradition, this is the showcase that features the artworks that have been awarded prizes or recognition by the Prix Ars Electronica competition. Special homage will be paid to the British art critic and curator Jasia Reichardt (born in Warsaw in 1933), who has won this year’s Visionary Pioneer of Media Golden Nica, a category established in 2014 to acknowledge those involved in the writing of the history of media art. Among her achievements, Reichardt was the curator of the 1968 Cybernetic Serendipity, the first large international exhibition dedicated to computer art at the Institute of Contemporary Art (ICA), in London. Studio International supported this show and, in the vanguard of art publications in the 1960s, published a special Cybernetic Serendipity issue edited by Reichardt. This year, on Friday and Saturday, there will be a forum with the winners and the members of the competition’s jury at OÖ Kulturquartier, just next to the OK Centre. Reichardt will speak on Saturday at 5pm. The OK Centre is closed on Mondays.

The theme of the festival is a reference to the research carried out by Japanese computer scientist Hiroshi Ishii, a professor at the Massachusetts Institute of Technology (MIT) who is also the festival’s scientific adviser and works with the concept of radical atoms. As the programme makes clear, this is a unification of the digital and physical world: “Radical atoms in the hands of visionary scientists and engineers are being formed into hi-tech materials and applications with astounding properties and capabilities. Neuroscience and biotechnology, robotics, hardware and software play roles in this; so do traditional practices in the crafts and trades.” Visitors to the Ars Electronica Center will get the chance to grasp this new notion of human-machine interaction.

Alchemists of our Time Exhibition at PostCity

Comprising 144 artworks by 230 artists, the Alchemists of our Time exhibition promises to impress by showing artistic practice as the foundation for experiments in science and technology. Most of the projects presented will be collaborations between artists, scientists and computer professionals.  Sometimes, the creators of the pieces on display take on all three roles. This is the case with the London-based Italian artist Davide Quayola, author of The Sculpture Factory. He developed software that recreates in real size nothing less than the sculpture projects of Michelangelo, which the Renaissance artist himself never finished. Another work that should not be missed is the series Forensic Fantasies, about electronic waste, by Linda Kronman and Andreas Zingerle. The artists went to the world’s largest electro-waste dump, located in Ghana, West Africa, to collect discarded computer hard drives and artistically explore the memories that surround them. “We leave not only material traces that have disastrous effects on people and our environment, but also digital traces, the value of which is to be called into question,” explain Kronman and Zingerle. With its reinterpretations from Michelangelo’s never-concluded masterpieces to abandoned computer devices, this show has the potential to be the high point of the festival.

The STARTS Prize is a European Commission award for innovative projects that combine experimental art with cutting-edge science and technology. This exhibition will bring to the public for the first time around 30 projects that were chosen from more than 1,800 entries submitted following an international open-call. A highlight of the winning projects is the stunning Magnetic Motion created by Dutch fashion designer Iris van Herpen, who uses 3D printing and other technologies to develop textiles that reflect the body’s movement.

The Interface Cultures department at Linz Art University contributes to the Ars Electronic Festival with the show Speculative Materiality. This selection of works, by young media artists who have studied or are studying there, explores possible future materials. According to the programme, there are no computer monitors or screens, but the public will see an agglomeration of materials and objects that generate speculation. Additionally, each year, Interface Cultures invites an academic institution partner to curate an exhibition on the Linz Art University campus. This time, Tsinghua University from Beijing is bringing to Austria interactive media artworks and animations made by faculty members and students of its Academy of Arts and Design. It is worth checking out the creations of these two promising generations from distinctive parts of the world. 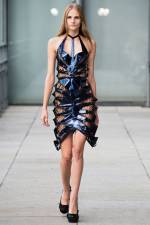 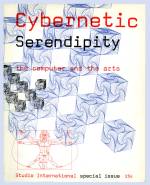