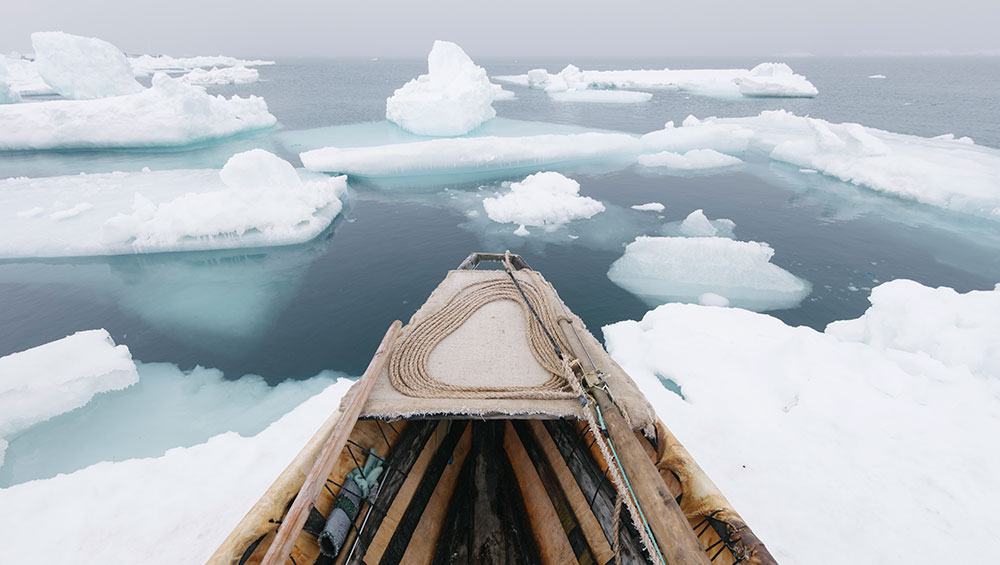 At the centre of the British Museum’s exhibition on Arctic culture and climate sits an exquisite model carved from ivory. It depicts the hustle and bustle of a Nenet reindeer camp, teeming with animals and people. In a conical tent at the centre of the scene, a woman gives birth, while all about her herders sell their wares to Russian fur traders and hunters go about their business. As one life enters the world, another leaves it. In front of the tent, a man stands over a reindeer with a knife in his hand as the beast falls to its knees. The artist who carved this intricate scene (sometime before 1860) portrays the reindeer’s last moments with such delicate pathos, you can imagine its back legs wobbling as its front crumples to the ground. 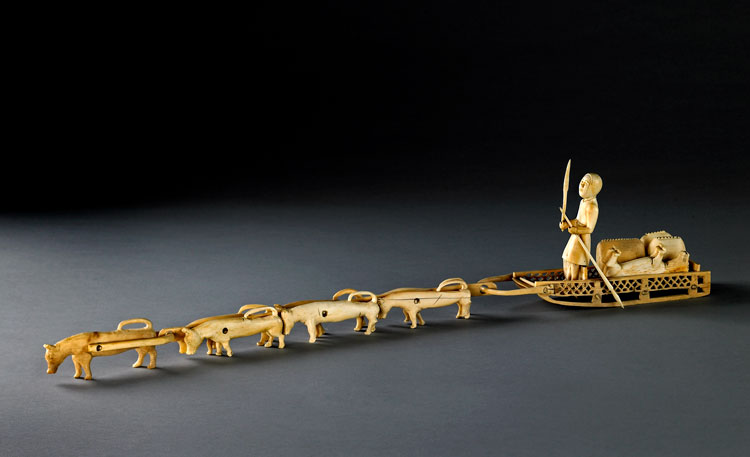 This scene was made from mammoth ivory, a material that is becoming increasingly available as the permafrost thaws to reveal the remains of these ice age giants. An animation at the very start of this exhibition hammers home the point. The climate is changing and the ice caps disappearing at an alarming rate, threatening countless species and the people who depend on them. And there can be no doubt that the relationship between Arctic peoples and the animal kingdom is a profound one. In every part of this exhibition, we can see that for thousands of years, food, clothing, tools and homes have been made from the flora and fauna of the region; nothing is wasted. There are bags sewn from fish skin and ducks’ feet, a breastplate carved from whale bone, and spoons whittled from reindeer antlers. Things have changed now, of course. Guns have replaced spears, and snowmobiles are faster than sledges, but the new has not entirely supplanted the old. 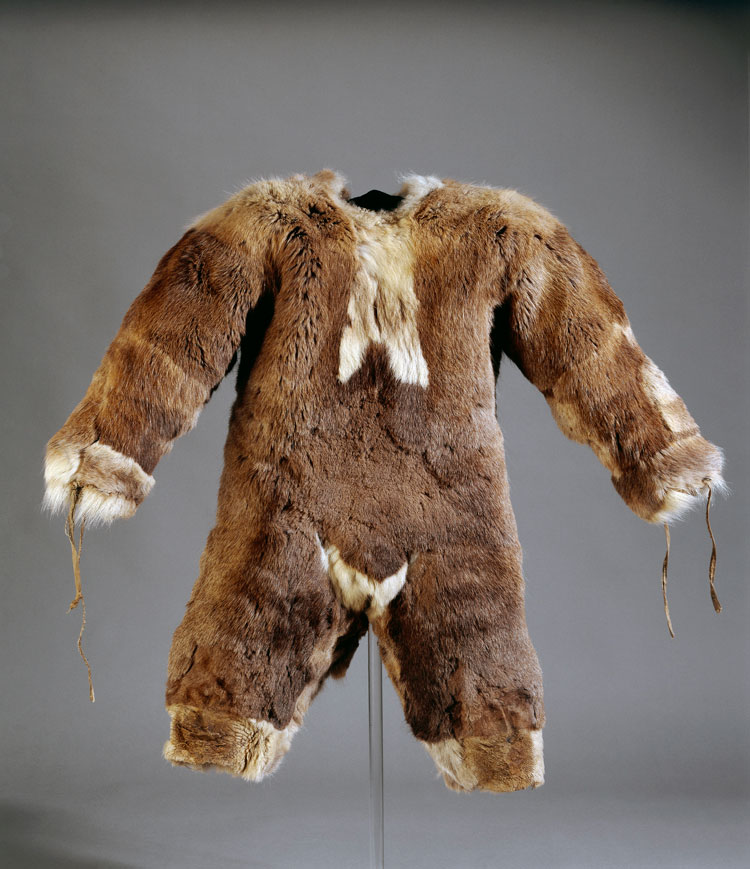 An amauti is a weatherproof parka with a baby carrier built into the hood. The one displayed here was made in Nunavut, Canada, in the 1980s, but the design has proved useful for hundreds of years. A nearby illustration by an Elizabethan traveller to the region shows a woman and baby from Frobisher Bay in just such a coat. There is also a little girl’s bright-blue parka from Alaska, made by the child’s grandmother in the 1990s. The hood is trimmed with wolverine fur, which does not freeze against the wearer’s face. Traditional sewing techniques are passed down the generations and their importance cannot be underestimated, as the right garments are essential to physical and cultural survival. Take for example a bright red Sámi hat from northern Norway. The Sámi people were forced to stop wearing their traditional headgear by Christian missionaries who believed that the hat, which vaguely resembles a horn, embodied the devil. The design is now making a comeback as a symbol of colonial resistance. 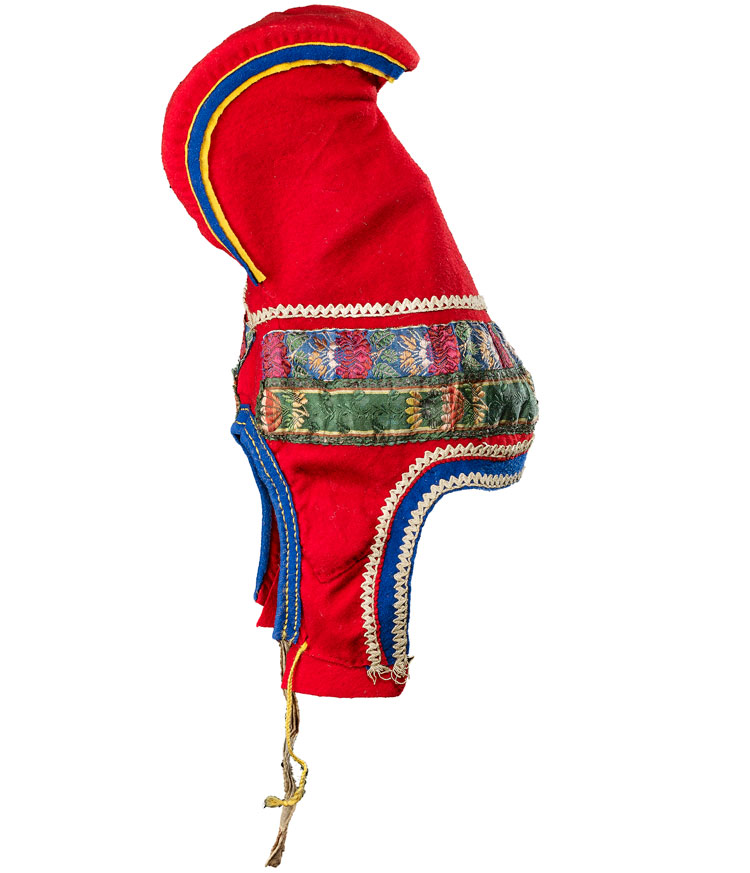 One of the star attractions here is a waterproof hunting suit made of seal skin. It cuts an eerie silhouette against an illuminated blue wall. The suit could be inflated through a tube so that the wearer would be kept dry and afloat as he or she leapt from a small boat to spear sleeping whales. It is the only complete example in existence and was worn by a Kalaallit hunter in Greenland prior to 1834. It is a sophisticated piece of kit and proves that necessity really is the mother of invention.

Nearby, there is a little tool carved to resemble a claw. It was used to scratch the sea ice, so that any seals lurking underneath might be lulled into a false sense of security. When the seal popped out of the water, expecting to see one of their own, the hunter would strike. It all sounds rather brutal, but life in the Arctic is tough. And it is important to remember that these hunting methods have been a sustainable way – and often the only one – to feed families for more than 30,000 years.

What is clear from the objects in this exhibition is that animals are used, but also celebrated and revered. Their powers are evoked through shamanistic practices and thanks is given for lives relinquished. Everything in the Arctic region exists because of a balance and it is the outside world that threatens that to tip the scales.