Antony Gormley's 'Field for the British Isles' is one of the most riveting projects by a British sculptor. Made up of 40,000 small terracotta figures, it is now on show at the British Museum.

Devoted to its magnificent collection of artefacts from all cultures, the British Museum enables a dialogue between numerous and varied manifestations of the human form and Gormley's original and moving presentation. Instead of simply viewing the work, the figures stare back at the viewer. Curator Colin Renfrew states,

Here, for the first time, 'Field 'is shown in the midst of these other creations in what may be claimed as the greatest collection in existence of artefacts from the various cultures of the world. 'Field' reaches out to its cousins around the Museum and invites you, the visitor, to go and locate the earliest sculptures from the prehistoric Near east or the clay figurines from prehispanic Mexico, then return to face the intense gaze of the 40,000 or so small terracotta figures which confront you.

Antony Gormley (b.1950) is best known for his vast sculpture 'Angel of the North' (1998), near Gateshead. Departing from traditional sculptural materials such as marble or bronze, he has used a plaster cast of his own body - standing, lying - to produce a body-case covered in lead or cast in iron. His works 'explore what it is to have a mind, what it is to occupy our bodily place in the world and through experience to become a being of full consciousness'.

Each of the 40,000 figures in the 'Field for the British Isles' were created in St Helen's, Merseyside in 1993. Earlier versions were made in Mexico (1990), Porto Velho in the Amazon Basin, and in Sweden. In each case, the figures were created in collaboration between Gormley and the local community. They were kiln-fired in brickworks and subsequently displayed en masse. The respective local communities were made up of local children and their extended families. Each person was given a small ball of clay with which they shaped a standing figure with two eyes. As many as 200 figures could be made by each person in a day. Gormley describes the process,

The 'ancestors' of Antony Gormley's work. As the curator describes them, can be found in different parts of the British Museum. 'You can find individual figures, called "aliens", from 'Field for the British Isles', in the rooms numbered on the plan.' The artist states,

Is it possible to make today, with our contemporary recognition of the importance of regional identities and difference and a cherishing of them in a sense that the colonial project never recognised, a work that has an aspiration to be a reservoir of thought and feeling for this point of time, yet which also has a resonance with things that have needed to be made since time immemorial?

Cult figures and effigies played a vital role in religious rituals. Other attempts to sculpt the human body relate to burial ceremonies. One of the most exciting discoveries of the 20th century was the Emperor's Immortal Army of Xin, in China, dating from 210 BC - lifesize terracotta warriors. It is, therefore, appropriate that Gormley should create an 'Asian Field', a new version of the 'British Field'. 'Asian Field' will be three times larger that the presentation at the British Museum. It will involve the manufacture of 120,000 hand-sized clay figures by 300 villagers near Guangzhou in China, and will then form a travelling exhibition.

If the 'Field' has a moral imperative, it is to remind us as viewers that we are 'active makers, the agents of the future'. The artist's poignant statement is as provocative as the superb exhibition of his work, 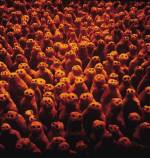