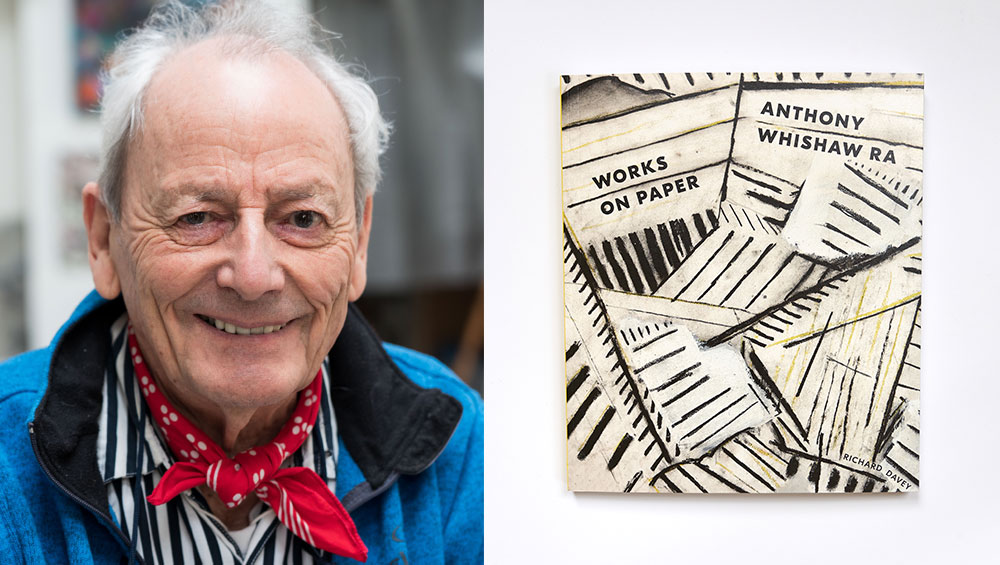 For Anthony Whishaw RA, the thought of retirement is anathema. With an exhibition of his paintings hanging at the Royal Academy (temporarily closed because of the Covid-19 pandemic) and a newly published book devoted to his works on paper, the 90-year-old British artist is showing no signs of flagging. Indeed, apart from his daily siesta – a ritual he adopted while living in Spain in the 1950s – it is hard to imagine this tenacious painter ever putting his feet up. 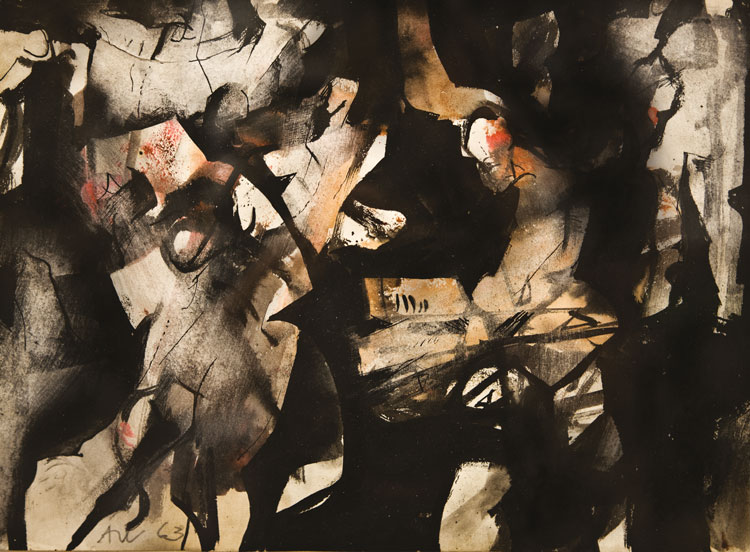 In 2006, the critic Brian Sewell described Whishaw as one of Britain’s most important abstract painters. Yet despite being a contemporary of Frank Auerbach, Lucian Freud and Bridget Riley, Whishaw remains a peripheral figure. This is largely down to his eschewal of commercial representation. As he once commented: “I don’t like the idea of making a product – I am not trying to make something that is instantly recognisable as by me.” This decision has enabled him to develop a distinctive body of work unswayed by art world trends but, as one of the most overlooked artists of his generation, it has clearly come at a cost. All the more welcome, then, is Richard Davey’s new book, Anthony Whishaw – Works on Paper, which provides new insights into this indefatigable artist’s intriguing work. 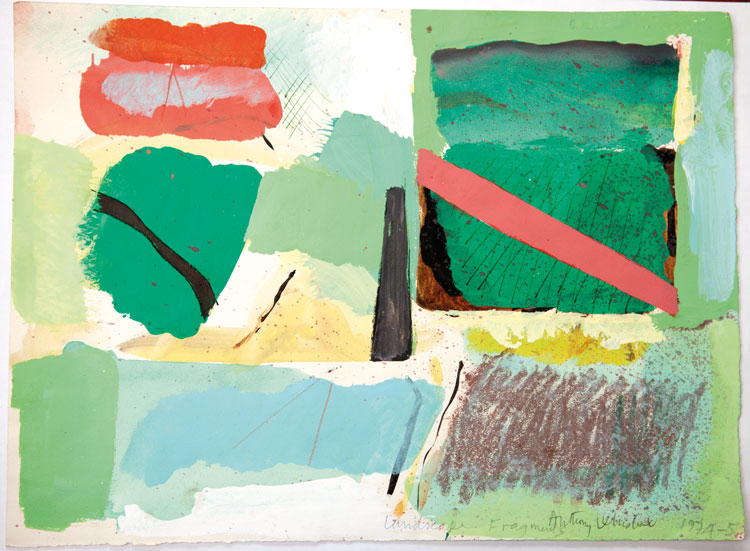 The catalyst for Davey’s publication was the discovery of Whishaw’s early sketchbooks from the 1950s and 60s; filled with life studies, landscapes and abstract experiments, they reveal the artist as a master draughtsman. This is not the first time Davey has written about Whishaw’s work. His 2016 book, Anthony Whishaw (Royal Academy of Arts), focused on the artist’s paintings, but made little mention of his drawing practice. Struck by Whishaw’s immense sensitivity to mark-making, Davey concluded that his long-forgotten sketches and rarely seen works on paper warranted a book to themselves. As he writes in the foreword to Works on Paper: “Where the first volume details Whishaw’s life and major themes, this one focuses on what a study of Whishaw’s drawings and works on paper can contribute to our understanding of this masterful, eloquent artist.” 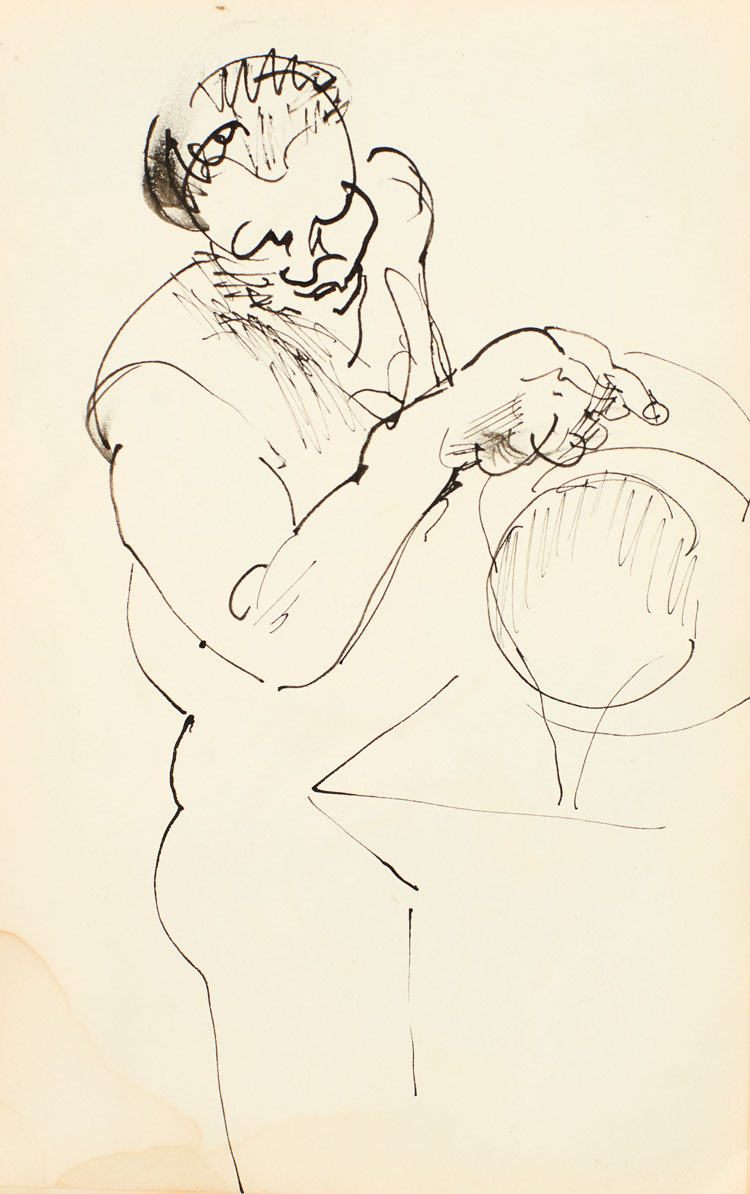 Lavishly illustrated with more than 150 colour plates and featuring a lively, insightful text, Works on Paper covers Whishaw’s entire career from the late 1940s to the present day. Flipping through its glossy pages, it quickly becomes apparent that the artist has never committed to a single style or motif. One minute he is employing spontaneous, flowing lines to capture the fleeting movement of dancers and sportspeople, the next he is inventing dazzling cubist-inflected landscapes. He has even been known to shoot a gun at his drawings, peppering their surfaces with bullet holes. There are, of course, recurring themes, but any attempt to pin him down or pigeonhole his work is doomed to failure. The ease with which he shifts between abstraction and figuration reflects a certain restlessness; this is an artist who is always experimenting, always on the move. 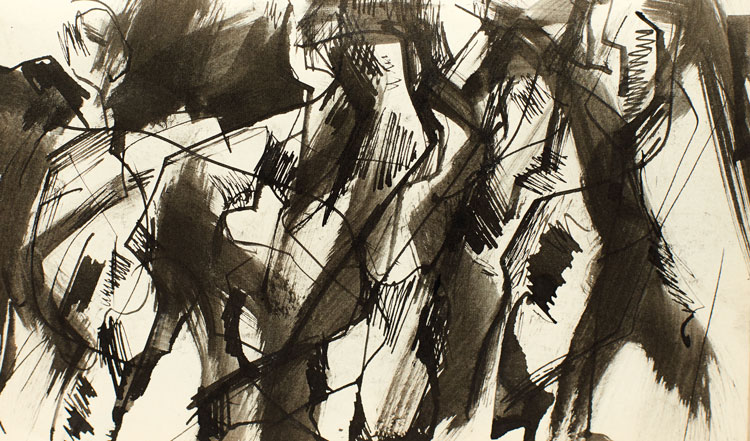 Davey has done a tremendous job in making sense of Whishaw’s divergent practice, dividing the book into six chapters, each focusing on a different aspect of the artist’s work. Whishaw’s simple yet remarkably evocative figure drawings come under the spotlight in chapter one (Drawing the Mark), while his deft ability to capture dynamic movement with the most economic of lines is addressed in the second (The Moving Mark). In the chapters Constructing the Mark and The Dissolving Mark, Whishaw’s mark-making becomes increasingly sculptural as the boundaries between people and places are blurred. These drawings see the introduction of a dynamic abstract language that dominates Whishaw’s later works, such as the deconstructed landscapes of chapter five, Looking Through the Mark. The curious final chapter, titled Humorous After-Thoughts, features a selection of cartoons that Whishaw made as a teenager. Though seeming incongruous, Davey notes that their inclusion reveals many of Whishaw’s visual interests: “his keen observation of life’s whimsical moments and inconsistencies, his humour and interest in visual gunnery, and his biting, yet often indirect commentary on current issues”. 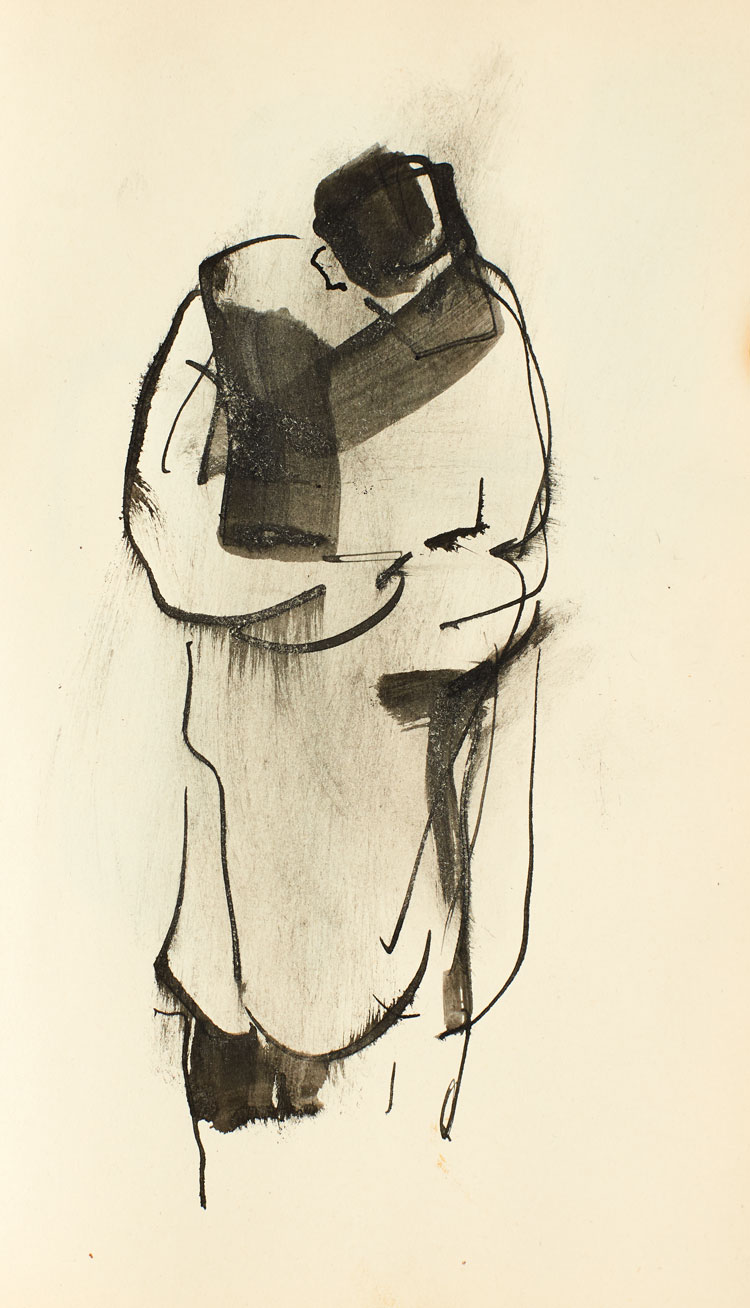 Davey’s text reflects his scholarly approach, yet his writing remains accessible and entertaining throughout. His time spent speaking with Whishaw and watching him in his London studios at Kensington and Bethnal Green result in some wonderfully vivid descriptions of the artist at work. Chapter two, for instance, opens with these evocative words: “Anthony Whishaw holds the fan brush lightly in his hand. With a precise flick of his wrist he deposits a line of delicate pink droplets on to the sheet of paper. He then holds it vertically, dabbing, twisting, dragging it dancing across the surface, leaving thin lines, and broad brushstrokes. He hides the brush without precisely determining the form, his practised gestures allowing for chance marks to bring moments of unintended interest.” 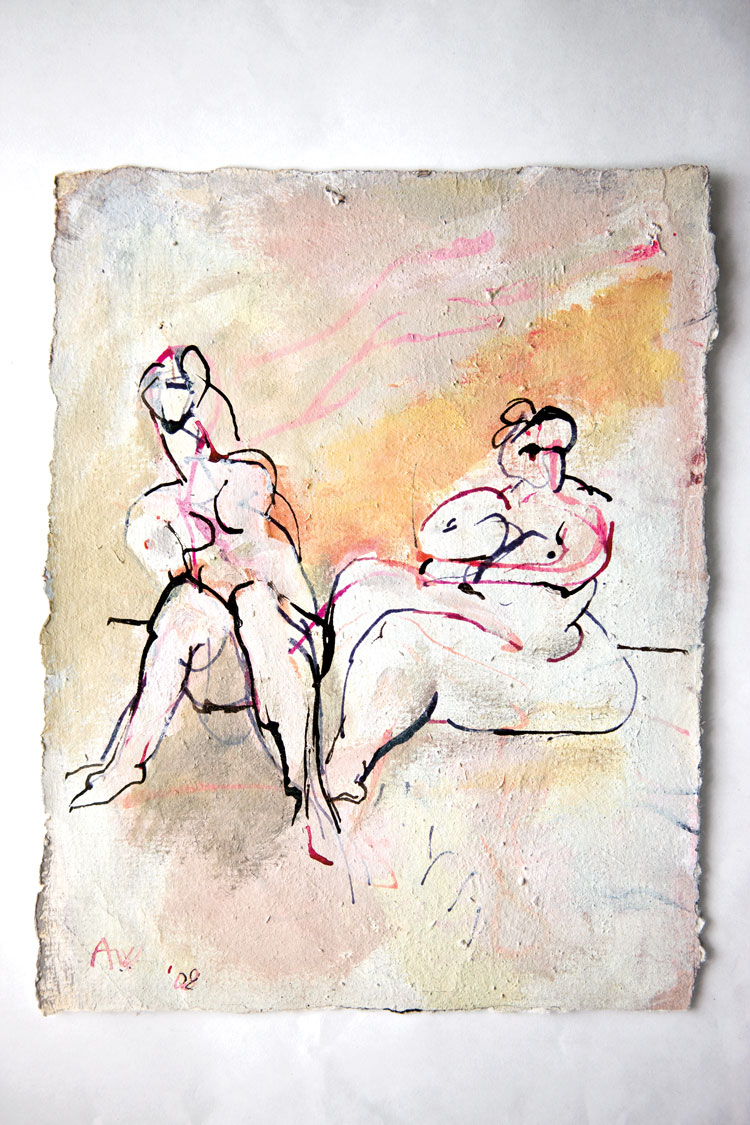 As with many artists of his generation, life drawing classes were an essential part of Whishaw’s education at Chelsea School of Art and the Royal College of Art. It is not surprising, then, to find that the human figure features throughout the book, from early studies demonstrating the traditional use of hatching and shading, to more expressive, semi-abstract modes of drawing. The female form is a recurring subject, but whereas he encouraged his drawing students to carefully observe reality, many of his own studies are a combination of memory and imagination. As he has noted: “Creation is not a reproduction of observed fact … the aim of art is the fusion of ideas and experiences with the qualities of the art medium so the artist creates a new reality.” 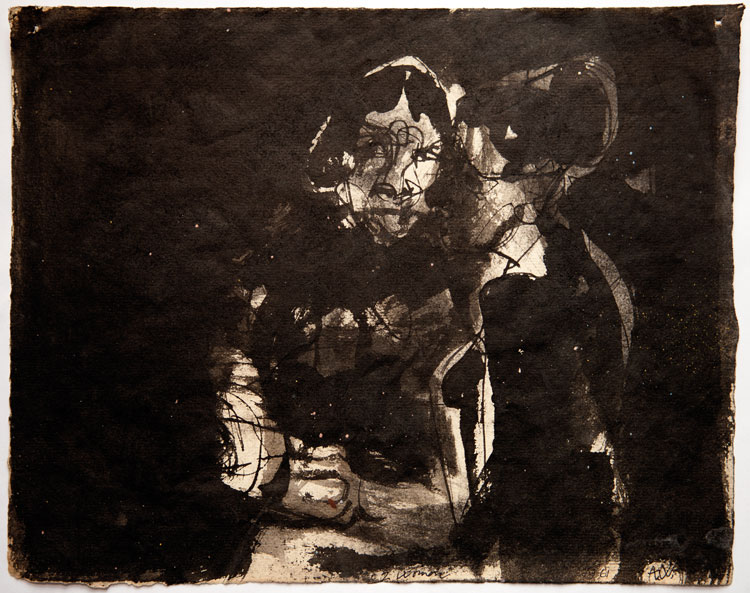 Spain has been an enduring point of reference for Whishaw since he first visited the country in 1951. It was there that he first encountered Francisco Goya’s Black Paintings, at the Museo del Prado, an experience that he says blew his mind and which, along with the paintings of Francis Bacon and Constant Permeke, significantly influenced his artistic development. Another important figure is Diego Velázquez, whose Las Meninas (1656) has been a longstanding inspiration. The painting’s complex composition has inspired several works, such as the mixed media drawing Painting the Infanta (1987-1991), in which Whishaw turns Velázquez’s enigmatic image on its head by positioning the viewer in the place of the artist rather than his subjects, the King and Queen of Spain. 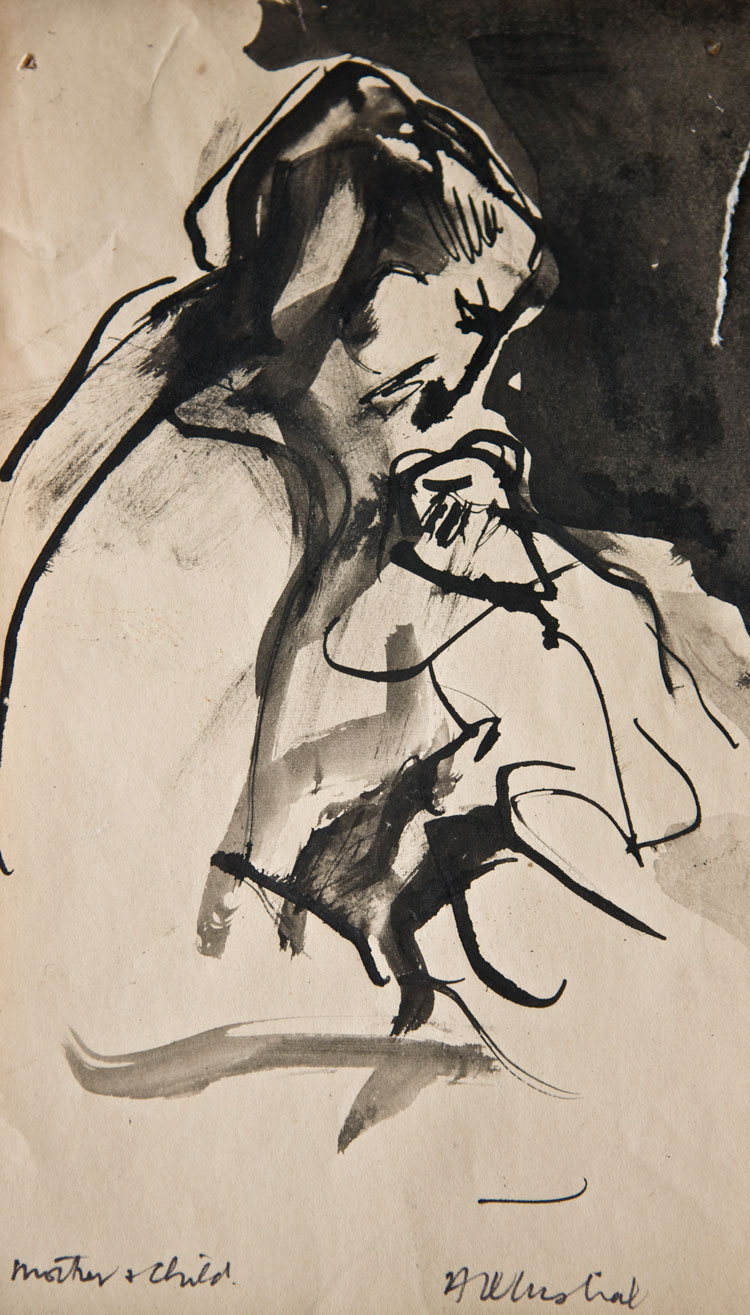 Whishaw returned to Spain in 1955 after winning a Royal College of Art travelling scholarship to the country. He bought a Lambretta and rode to Madrid, then to the south of Spain where he lived for around a year with his wife and fellow artist, Jean Gibson. It was while spending much time riding along dusty roads and stopping to make quick sketches of hilltop towns and their residents that Whishaw developed the graphic, semi-abstract shorthand that has since come to characterise much of his work. The impact and memory of Spain’s landscape and culture on Whishaw’s work is the subject of his recent solo show at the Royal Academy, With Spain in Mind, which was abruptly cut short by the Covid-19 lockdown. Including works on paper and large-scale paintings, the exhibition features abstracted landscapes, fractured interiors and works inspired by the violent spectacle and pageantry of the bull ring. It is hoped that the exhibition will be extended after lockdown restrictions have been lifted. Until then, Davey’s Works on Paper provides a timely opportunity to appreciate the many sides of this complex and under-appreciated artist.

Anthony Whishaw RA: With Spain in Mind will be on view at the Royal Academy after UK lockdown restrictions have been lifted. Dates are still to be confirmed. For more information, visit:
royalacademy.org.uk/exhibition/anthony-whishaw-ra-with-spain-in-mind 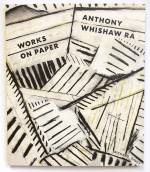 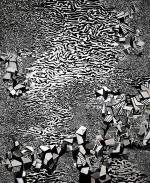 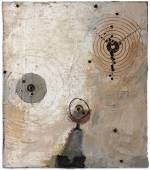