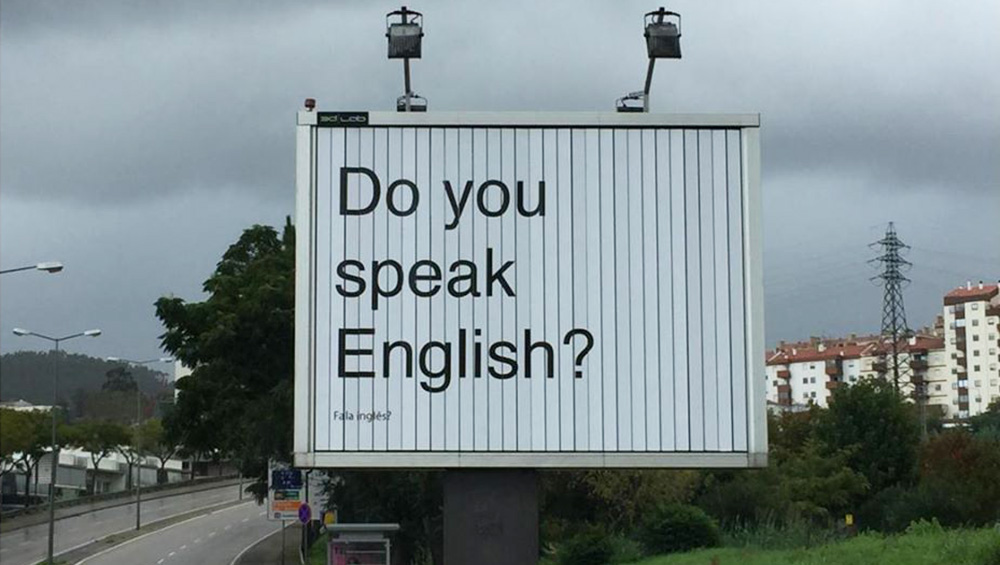 “I must stay in the deserts and unmarked plains of my life, and I fear I shall shorten it. But when death comes I want them to take me and put me in a little boat in this perpetual water between the long shores; and I, down the river, lost in the river, inside the river … the river …”
(João Guimarães Rosa, The Third Bank of the River)

Portugal is probably not the country of choice for a contemporary arts lover. Despite a lively cultural scene in the capital, Lisbon, most Portuguese cities have relatively little for those interested in the arts. But Coimbra, a riverfront city in the country’s centre and its capital in medieval times, is a jump ahead. AnoZero’19 (YearZero’19): the Coimbra Biennial of Contemporary Art, opened here last month. Organised by Círculo de Artes Plásticas de Coimbra (Coimbra’s Fine Arts Circle) in partnership with the city council and Coimbra University, it aims to circulate new ideas in this historic city and promote attendance at contemporary art expos. The man behind the biennial is Carlos Antunes, director of the Fine Arts Circle.

The number three figures prominently: this, the biennial’s third iteration, has three curators and takes its name from the title of the short story The Third Bank of the River, by João Guimarães Rosa, one of the most the important Brazilian writers of the 20th century. Agnaldo Farias, who curated the Biennale of São Paulo in 2010, is this year’s chief curator. He says that here in Coimbra, modern art works as a counterpart to the city’s ancient monuments and tradition. Agnaldo is assisted by Lígia Afonso and Nuno de Brito Rocha. The emphasis on the number three is not entirely by chance. “We wanted to avoid the polarisation the world has been experiencing,” says Afonso.

The Third Bank of the River is the story of a son attempting a dialogue with his father, who one day decides to move from his village to live in a small boat on the river and never to return. “Even the 700 years of [Coimbra] University are nothing compared to the time of the river,” says Farias. “Coimbra is known for its academic prestige, the production of knowledge. It is important to save room for doubt. The third bank is the enigma, the intangible, the silence.” Farias says people are eager to have answers to everything. But, he says: “Answers do not account for the contemporary world. We have no other choice but to pose questions.”

Phrases and themes from the story, such as “silence”, “passage”, “time”, “margin”, “bank” and “courage”, served as a guide to the choice of curators and artists. Thirty-nine artists have taken part, some already well known and others who are just emerging, and they come from 21 countries, including Argentina, Mexico, Morocco, Mozambique, Peru, Poland, Romania, Spain and the US; 15 of them are from different regions in Portugal. Encompassing a diverse range of formats and media, including installations, literature, video, cinema, performances and music, their works are spread among various exhibition spaces.

The place chosen as the biennale’s headquarters has a close relationship with the Mondego River that runs through Coimbra. The immense baroque monastery of Santa Clara-a-Nova stands on high ground, built to replace the former monastery, which was in an area prone to flooding, and the ruins of which still remind the population of the moody character of the river. The building was occupied by the military after the nuns left, in the late 1920s, and its vastness might be read as either a blessing or a challenge to the curatorial team. Here, the curators have given preference to works of scale, having designated other venues for smaller, more intimate works. 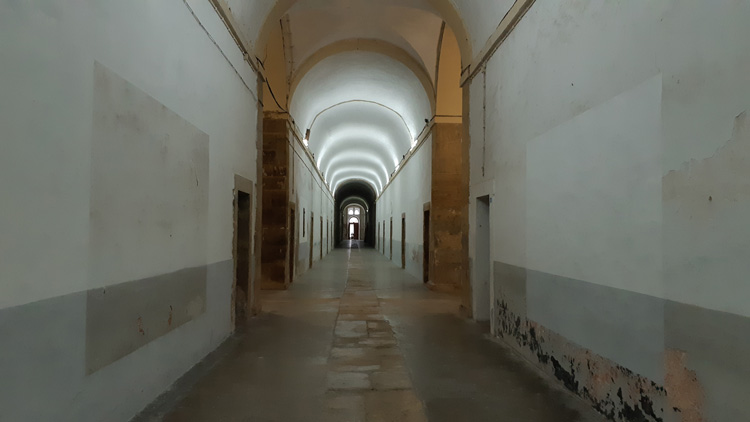 Some artists refer to literal rivers in their creations; in other works, one can find metaphorical rivers, even if that was not the artist’s intention. That is possibly the case with Veronica (2019), by Daniel Senise, one of the best known of the Brazilian artists here. His site-specific work, spreading along the monastery’s main corridor, consists of the partial restoration of its walls, emphasising the degradation, the passage of time and the religious and military memories of the abandoned building’s previous occupiers. Many other artists refer to flows or fluids. In Oasis (2019), the Brazilian artist Cadu (Carlos Eduardo Felix da Costa) uses water as a sculpting agent to alter dilutable materials, thus generating a design of unpredictable results. And migration flows is a theme that runs through many works. 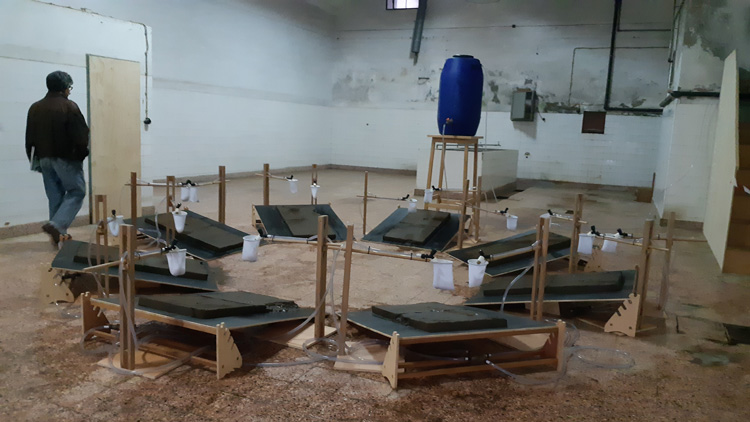 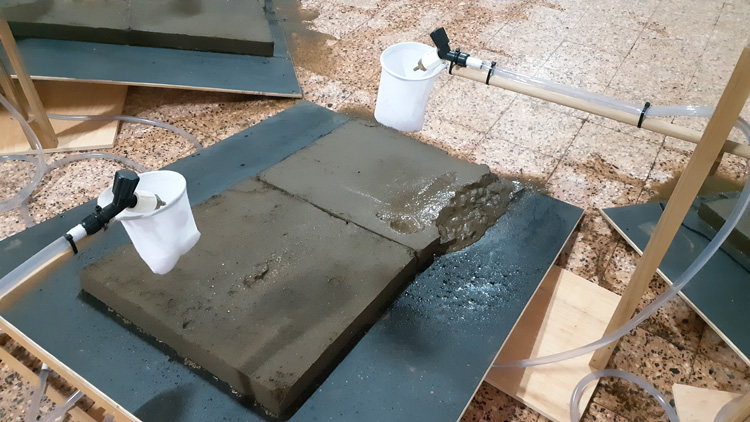 As well as rivers, there are also boats, such as the Brazilian artist José Spaniol’s installation Sonhos de Outubro (October Dreams) in the city council’s exhibition room. A wooden boat is delicately balanced, above our heads, on slender wooden sticks representing a sugar cane crop, apparently marooned there when floodwaters receded. 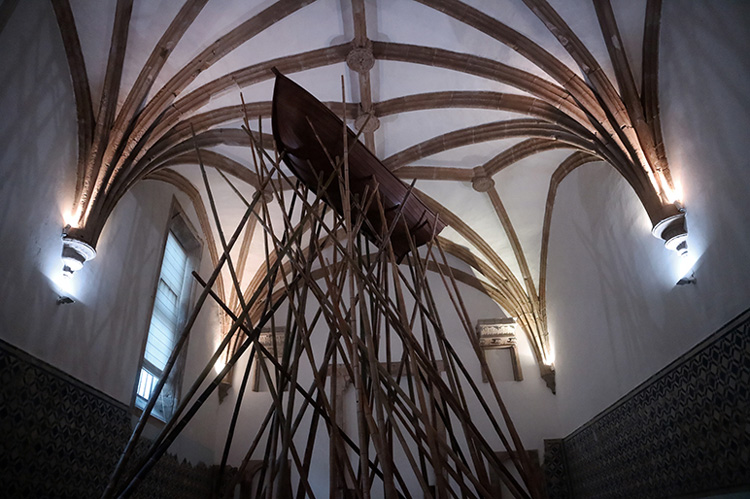 ABC of Life (2019) by the Egyptian-born Anna Boghiguian, who was awarded the Golden Lion in Venice for the best pavilion in 2015, is one of the commissions for the biennial. In this work, Boghiguian’s paper cutouts of expressionist theatrical figures are attached to sticks, along with excerpts of historical texts and vegetation, in rooms painted in vivid colours, to depict human conflicts and oppressive regimes. In one of the scenes of ABC of Life is a sailing boat on which one can read such existential phrases as “Life free from illusion is not life”, as well as a map and a list of countries that traded in raw cotton. 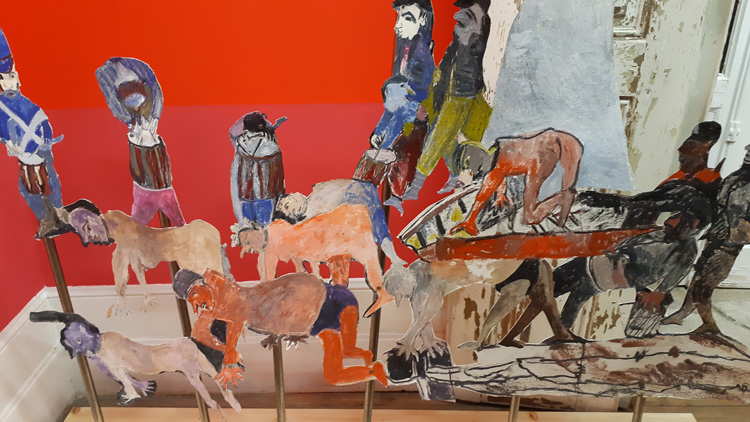 Boats have also been prevalent in Portuguese art and heritage because of its past history of conquest at sea, and are a recurrent image in today’s European policies for refugees – an issue approached by some of AnoZero’s pieces and workshops.

Another highlight at the monastery is the work by the Portuguese duo João Maria Gusmão and Pedro Paiva, which occupies what is possibly the noblest part of the building, the ancient, long tile-covered dining room. Duck in Beijing (2015-2019) is a hypnotic camera obscura installation. Contradictory commands and technical choices such as unfocused images unveil the hands behind the mechanism, thus questioning an expected scientific truth. 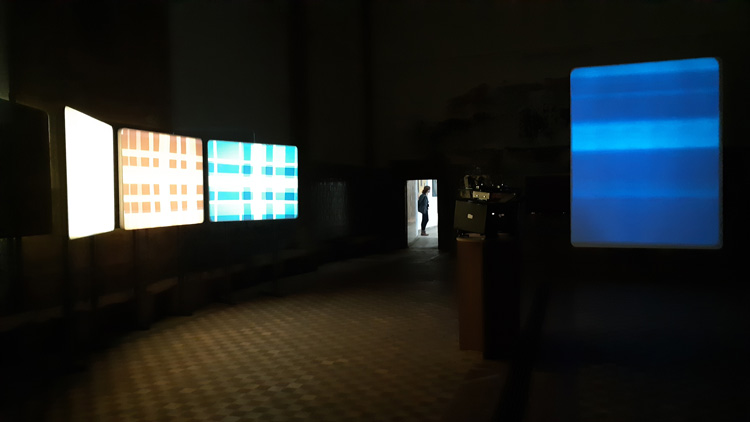 Belgian artist David Claerbout is known for deconstruction and deletion. Along with a team of 2D animators, he painstakingly redrew the frames of Disney’s The Jungle Book, reassembling them to create an entirely new film devoid of any anthropomorphism or story. The result is the contemplative The Pure Necessity (2016), which has done away with the originally imperialist narrative. There are comfortable seats in front of the screen, perhaps suggesting that this works merits a longer stay by visitors. 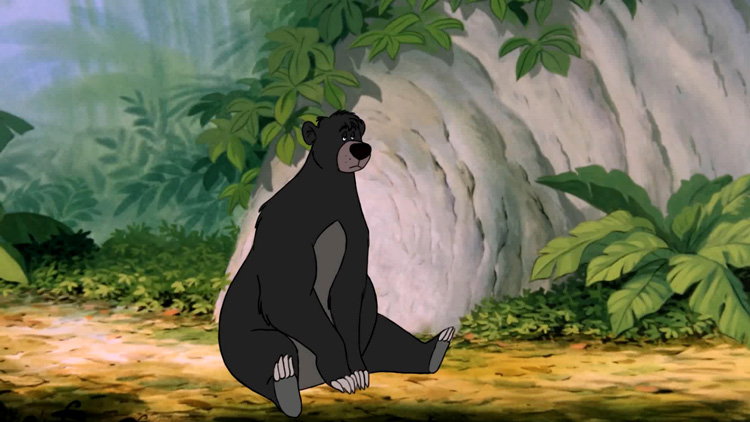 Although the monastery is the main and largest gallery, other venues have must-see works. The biggest star this year is probably Turner Prize-winner Steve McQueen, whose Once Upon a Time (2002) is at Coimbra’s University School of the Arts. The curation team see this as a key element of the biennial’s discourse. In the 1970s, Nasa sent photographs into space on Voyager II that were intended to show aliens what life on Earth is like. Inspired by this, McQueen worked with scientists at the space agency to create a sequence of images replicating those still travelling through space along with unintelligible voices “speaking in tongues”.

The overlap between art and science is also found elsewhere in the exhibition. At the university’s Museum of Science, visitors might find it hard to distinguish the work of art from the regular objects and machines that are part of the museum’s collection. In Constança, Esperança e Graça (Constance, Hope and Grace) (2019), the Portuguese artist Bruno Zhou displays tools and products for daily personal hygiene on a table used for chemical experiments, resembling an old cabinet of curiosities. 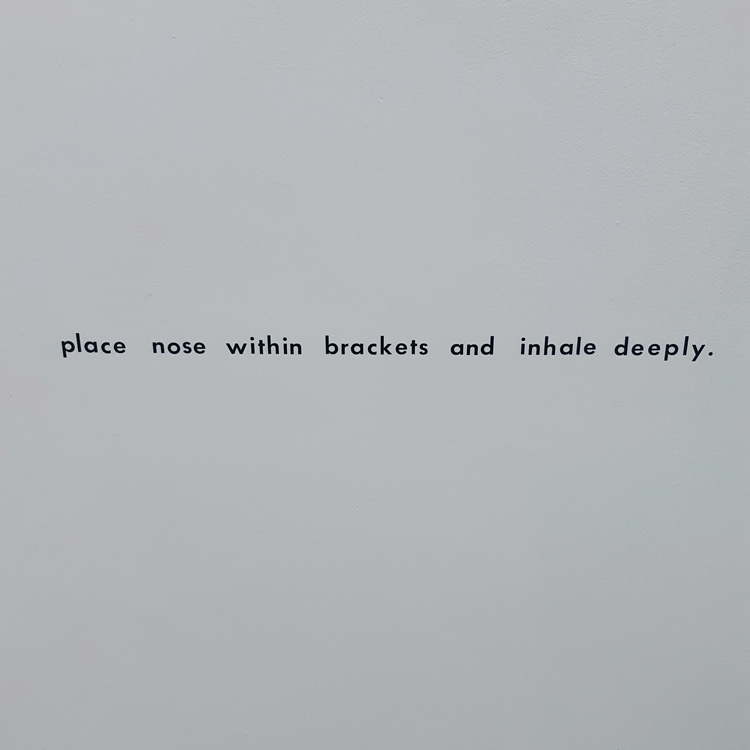 On display at the Círculo Sereia, near the city’s central public garden Jardim da Sereia (Mermaid’s Garden), is ShipShape. A display of visual, concrete and experimental poetry curated by the Portuguese artist Tomás Cunha Ferreira, it is an exhibition within the exhibition. It assembles pieces and poems that explore the graphic form of letters and punctuation marks (especially the parenthesis, the shape of the ship) in two and three-dimensional space. “The parenthesis are not the river banks, frontiers within which something is imprisoned, but a suspension point that opens to new creations,” says Ferreira. The selection includes sound sculptures and audiovisual performances with poetry, image and music, accounting for the “verbivocalvisual” poetry named by James Joyce and adopted by concrete poets, visual artists and singers in the 1970s. 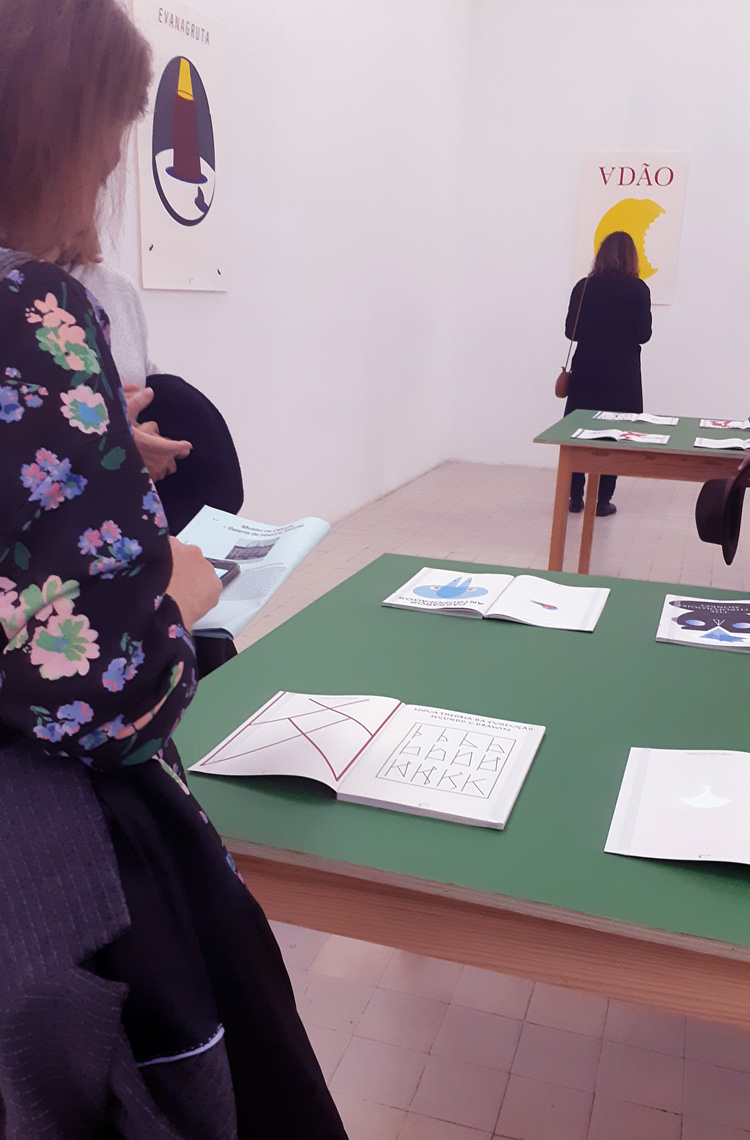 Back at the College of the Arts, books are the medium for the French artist Mattia Denisse. K Contra K (K Against K) (2019) shows the covers from the catalogue of books that Tripod Editions – a fictional publishing house created by Denisse – has published “in the future”, including for instance The Treaty of Applied Paraphysics and Le Retour de l’Empereur Totomato. Nonetheless, the catalogue has actually materialised thanks to a partnership between the real publishing houses Almedina and Dois Dias Editions with Tripod, that, in a circular conundrum, loses its fictional character. 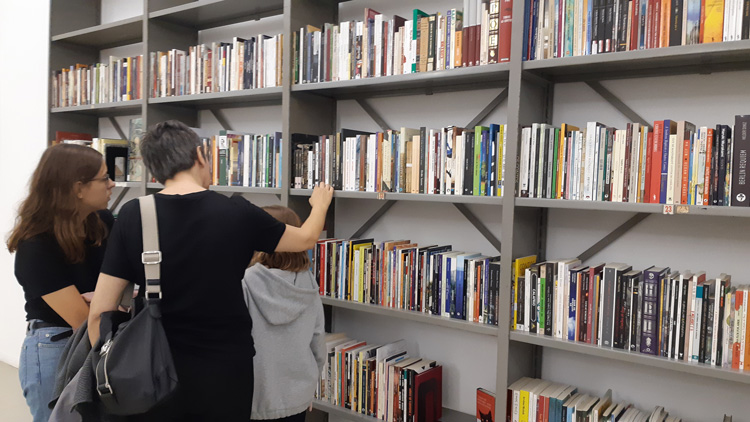 Books are also the main characters in the Turkish artist Meriç Algün’s work. These are very particular books: The Library of Unborrowed Books (2019) gathers together a shelf of storybooks from Coimbra University’s main library that have never been requested. As in Denisse’s work, the artist has changed the status of the books: here, taking out the books means they are no longer forgotten objects. This is part of the work’s legacy: the main institution of the city is now for ever transformed. Algün has also put up billboards on various streets where one can read sentences extracted from immigration forms. The outdoor work reminds citizens not only of the criticism behind it, but also of the public character of the art.

“This biennial is an anti-event as it is meant to last, and even be permanent in the life of the city,” says Antunes. Indeed, apart from the works themselves, the “anti-event” gives visitors an experience of the city. The exhibition is spread among public buildings throughout the city centre and other neighbourhoods, as well as in open spaces. Thus Coimbra becomes a work in itself, as the audience strolls from one place to another, embracing the whole city.

The event has already led to the restoration and improvement of some monuments. And this year, the ministry of defence, which is in charge of Santa Clara-a-Nova monastery, has announced that it will make it available to the biennial on a permanent basis. “It’s a good thing we managed to keep it as an inclusive place in the city, instead of making it into a five-star hotel,” says Antunes.

The biennale’s total budget is estimated at almost €0.5m – “a true miracle”, according to Antunes – two-thirds of which has come from public money and the rest from private sources. In addition, nearly 100 volunteers, mainly students, have helped to set up the biennial and in mediation activities. A group of curatorial studies students have arranged workshops, roundtables and other activities to engage the public. This biennial truly puts Coimbra on the map as a destination for those interested both in history and contemporary arts. 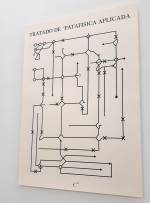