For his Portugal Venice Biennale commission, artist José Pedro Croft has made a series of six glass-and-steel sculptures that lurch and loom around the gardens of Villa Hériot, on the Giudecca. He talks about the uniquely Venetian dialogue between precariousness and permanence, as well as the monumentality and simplicity of a nearby Álvaro Siza project, both of which have inspired his project, Uncertain Measure

Portuguese artist José Pedro Croft (b1957) conjures a giddy sequence of toppling glass-and-steel oblongs on the lawns of Giudecca’s Villa Hériot in his work Uncertain Measure. Their dimensions – 8m high x 3m wide are intended to evoke (albeit in two dimensions) the apartments (which are 8m x 3m x 3m) in the remarkable social housing project by Portuguese architect Álvaro Siza, which sits behind the Villa Hériot. Their steel frames echo the pilings that support the island itself, while the tilting slabs of red, blue or semi-opaque glass conjure simultaneously a sense of weight and fragility, throwing up unexpected views and reflections that shift as this mercurial city’s light conditions change. 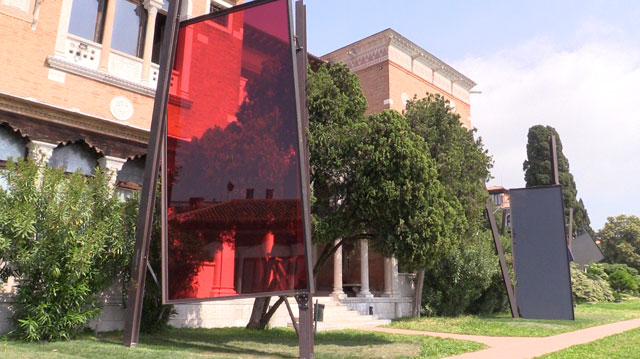 Made with specialist architectural glass, each sculpture weighs in at three tonnes, and the process of manufacturing and transporting them to Venice was quite an undertaking. The glass planes act like sails, says Croft, so their ability to withstand strong winds also had to be factored in: “They look precarious but each is as strong as a building.”

For Croft, sculptures and their context are inseparable, carrying the spirit of their original inspiration and situation even when placed elsewhere. He is increasingly celebrated for his site-specific and permanent pieces in conjunction with very specific architectures and landscapes – even infrastructure, in the case of a huge project he is undertaking in northern Portugal, where he has placed a series of glass and metal screens around a huge dam and its landscaping, also designed by Siza.

Croft initially studied painting, but moved towards stone sculpture in the 1980s before embracing a wider range of architectural and elemental materials, especially glass, metal and frequently water. His work is present in many of the world’s leading private and public collections. He has participated in international exhibitions and has had solo shows at the Calouste Gulbenkian Foundation (1994) and a retrospective at the Centro Cultural de Belém (2002).