Warhol was one of the first artists to recognise the truly spectacular side of politics in the democratic western world, as well as the quasi-religious aspect of totalitarianism.

In the former, various politicians vied for the celebrity that would win them the most votes; in the latter, the image of the leader (specifically Mao, who drew Warhol’s attention and artistic hand) became a symbol of power and unquestioned superiority. The posters were already out there – the glamour, the games and the populism reigned supreme even in the 1960s – but Warhol was the first to mimic and implicitly question the bizarre performance of politics across the ideological spectrum.

It is intriguing, then, that a series of political portraits and artworks are now exhibited in the Scottish parliament in Edinburgh. The main reason for this temporary adoption is that parliament (in collaboration with the Andy Warhol Trust and the Carnegie UK Trusts) is celebrating the Scottish-born Carnegie as part of the Andrew Carnegie International Legacy: Shaping the Future series of events. Given that Carnegie’s philanthropy paid for Warhol’s first art lessons in Pittsburgh, it is fitting that the connection should be made between the artist, the philanthropist and a new parliament.

Though Scotland is rarely a place of radicalism (at least in this century), this period is more interesting and newsworthy than usual, given an impending referendum on Scottish independence. It is about as radical and turbulent as Scottish politics is likely to be, so the showing of Warhol’s political works is somewhere between provocative and fitting. Hammers and sickles line the walls, not far from dollar notes and a portrait of Queen Elizabeth II. Jackie Kennedy charms a new generation of the public with charisma from afar, close to disturbing canvases depicting the JFK assassination, by way of copy reports and images from the papers, in Flash – November 22. Portraits of Lenin, Mao and Carnegie line the walls in a democratic, and therefore surreal, manner, as if smiling through the most impossible cocktail party or gameshow ever conceived. A terrifying picture stands out: Vote McGovern, in which Richard Nixon grimaces in horrific blue and nauseous green, with the yellowed eyes of a monster. This was Warhol’s contribution to the Democratic campaign, or at least a joke at Nixon’s expense.

What is interesting about the selection here is that these figures conjure up their modern equivalents and the little-changed narratives and caricatures that dominate our TV screens today. Everything and nothing has changed, from one political era to another. Even the art that comments and enjoys the surrealism of politics has not moved on very much from the garish prints that Warhol created, in part due to the artist’s own power and populism. And that is what is perhaps the most fascinating aspect of this show – that the art trivialises the politics it paints. It reduces the grand theatre of the political stage to a crazy circus of impossible illusions.

There is a detectable buzz and frisson about the show, from the crowds of Scots and tourists who filter through. On the eve of a national decision that could break up the Union, once a great Empire, through a democratic referendum rather than any rebellion more radical or violent, the exhibition enjoys and inspires a brilliant anxiety, and provides a respite from the essential seriousness of the issues that politicians discuss, even if not the politicians themselves. Warhol, once again, comments on the bizarre drama of politics, that has changed little in essential dynamics, rules, or ambiguity since the dates of these artworks. 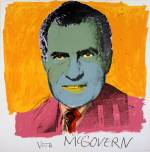 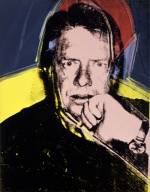 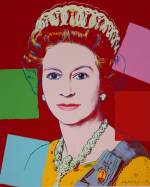