Ancient Lives explores the mortal remains and daily routines of eight of the British Museum’s mummies from ancient Egypt and Sudan. This is an exhibition rich in information and context, using cutting-edge technology, but it is also an exhibition that is bound to produce mixed feelings.

Mummies are an enduring presence in popular culture. Maybe it is because they combine superstition and horror, playing on our fears of the dead while tapping into our desire for immortality. They appealed to the gothic imaginations of the Victorians, who revelled in the macabre business of unwrapping mummies as a means of after-dinner entertainment. They appealed, too, to the early film-going public flocking to see Hollywood blockbusters inspired by Howard Carter’s team, who discovered Tutankhamun’s tomb only to fall foul of a series of unfortunate events. And they appeal still, in this age of science and technology, because now, more than ever, we can peer into the most intimate lives of those who have long since left the land of the living. But, in doing so, we discover not the monsters and vengeful un-dead of Hollywood, but people who lived, worked and were mourned by those they left behind.

Ancient Lives brings us face to face with the past using state-of-the-art CT scanning and 3D imaging, a far cry from the mediums and séances of our Victorian forebears. The curators are keen to remind us that all human remains should be treated with respect – no longer is it the practice to pull mummies apart. Instead, each body is displayed intact, accompanied with interactive computer images that enable visitors to peel back the layers of wrappings electronically and to peer at and into the bodies beneath. Undoubtedly, this is preferable to physical dissection, but bodily boundaries are still crossed. We are afforded the option to investigate the bowels and the brains of deceased individuals who cannot protest at the scrutiny of thousands of curious eyes.

The exhibition covers funerary practices along the Nile from 3,500BC (predynastic Egypt) to AD700 (medieval Sudan). The oldest individual on display lived before the time of the pharaohs. When he died, he was simply wrapped in cloth and placed in a shallow grave, preserved naturally by the dry conditions of the desert. Curled up in the foetal position, his small, fragile frame is, quite literally, skin and bone but, remarkably, his ears, brain and even his last meal survive.

Tamut, the Chantress of Amun, was given a more elaborate send-off. She lies intact in her still unopened and beautifully painted sarcophagus. The amulets that were buried with her are visible on the interactive 3D visualisation, which also reveals metal fingernail covers. Curved around her neck is a figure believed to depict Nut, goddess of the sky and mother to the deceased. It wasn’t enough to simply preserve the body for survival of the soul in the afterlife, but it also had to be protected.

Other individuals were not as carefully prepared. Poor old Padiamenet, a temple doorkeeper from Thebes, was rapidly and rather haphazardly embalmed, so much so, in fact, that his head became detached during the mummification process. The embalmers tried to remedy the situation by reattaching it with two wooden rods. Ironically, a page from the Book of the Dead displayed nearby includes a spell designed to avert decapitation in the perilous underworld. Nor was Padiamenet’s coffin a perfect fit. He was too long for the cartonnage, so the embalmers added a crude extension to accommodate his feet. He was unlucky in life, too. Scans revealed that he suffered from numerous dental abscesses. He was not the only one; most of the adults in the exhibition had extremely bad dental health, which would have caused them considerable pain. Both Tamut and Padiamenet also suffered from plaque in their arteries, a major factor in heart disease.

The curators have chosen a broad selection of individuals to demonstrate a variety of lives and funerary practices across a 4,000-year period. An unusual mummy, dating from the Roman period, is padded out to look like a woman, when, in fact, the painted wrappings conceal the body of a young man. A young Christian woman from medieval Sudan, naturally preserved in the dry heat, sports on her inner thigh a tattoo of the monogram of Saint Michael. Most moving, perhaps, are the bodies of two young children, lovingly prepared for the afterlife. So many died young in ancient Egypt that the practice of embalming children was unusual. There are beautiful objects on display, too; a stunningly preserved wig, partly bleached by the harsh Egyptian sun, a harp and three exquisite gold funerary masks – to name but a few.

The exhibition concludes with three simple pillars, all set at the estimated height of the individuals they represent – a screen at head height displays CT scans of each face. This is the curator’s concluding attempt to hammer home the feeling that the bodies on display once walked in the land of the living, that they were real people. It has the feel of an art installation, while simultaneously prompting us to look the dead in the eye – a moving and slightly unsettling experience. Try as they may, the curators cannot erase hundreds of years of ghost stories and superstition, which remain buried deep in the subconscious of even the most technology savvy and scientifically minded of us. But Ancient Lives succeeds in bringing us the human stories, too, by providing the contexts of these people’s lives and, ultimately, their deaths. The oddly preserved, sunken face of a 3,000-year-old corpse may unnerve, but the British Museum reminds us that he was once a living, breathing man with an awful toothache. 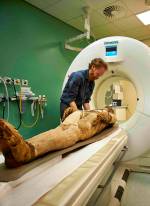 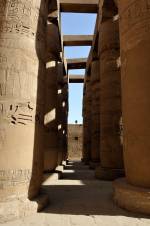 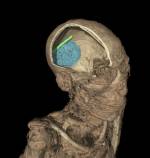