As well as some of his best-known works of embroidery and ballpoint-pen drawings, this exhibition includes fascinating archival material, including postcards, photographs and letters that shed light on the artist’s life

The exhibition of works by the Italian artist Alighiero Boetti (1940-94) at Mazzoleni packs a double punch. Upstairs is an excellent museum-quality show featuring works from some of his best-known series, including ballpoint-pen drawings, a map, a postcard work and embroideries from the Tutto series. Downstairs, however, is a collection of archival materials from the collection of co-curator Rinaldo Rossi, who worked with Boetti for 30 years. It includes postcards, correspondence, sketches, photographs and a cushion made by Boetti as a gift for guests at his second wedding in 1990, embroidered with the names Alighiero e Catherina. Here we are treated to an insight into the artist’s personal life, mind and working processes.

Fascinated by numbers, words, dates, sequences, magic, coincidences and games, Boetti began producing sculptures in the late 60s and, initially, was caught up in the Arte Povera movement, before turning to mock this and produce his own manifesto (1967). Many of the principles remained consistent, however, and he held a firm belief in the motto “mettere al mondo il mondo”, which translates both as “bringing the world into the world” or “giving birth to the world”, the title of one of his ballpoint-pen works from the 70s, but also reflects his attitude that artists oughtn’t necessarily to invent new things, but, rather, should work with what the world already has to offer. This he does, seeking to impose order on disorder and disorder on order. Art is a game, a system. The viewers are players who must first crack the code in order to read the work. His small embroidered squares, which here line the staircase between the two halves of the exhibition, are made up of smaller squares with letters on and can be read vertically; his larger such pieces often involve a series of systems and maybe even more than one language. Senza Titolo (Alternandosi e Dividendosi) (1989), for example, is in both Italian and Farsi, and Oggi Venticinquesimo Giorno del Settimo Mese dell’Anno Millenove100ottantotto al Pantheon (1988) comprises squares within squares within squares, where sentences can be read in different directions within the smaller segments.

Boetti loved travelling and, in 1971, he began to visit Afghanistan frequently. He employed workers there to do his embroidery, paying them well ($2 per letter). This relationship flourished and when the Russians invaded in 1979, Boetti’s workshops moved with the refugees to Pakistan. Comparing works pre- and post-invasion, a subtle difference can be noted in the thickness and tightness of the stitching. Downstairs, there are three contemporary Afghan rugs on the floor: one has a map on it. This shows that the relationship was reciprocal, with Boetti’s work having a lasting influence on the Afghan population and its traditions. The map on show upstairs, Mappa (1979), was made in this pivotal year. It is significant in another way too, with its grey sea being an early example of the many coloured seas that came to epitomise Boetti’s works. Boetti would plan his maps, Rossi would draw them on to the canvases and then these would be sent to Afghanistan. Initially, the seas were intended to be blue. The story goes that one map came back with a pink sea. The workers had run out of blue thread and neither had the means to pick up the phone and request some more nor the knowledge that the sea was blue. So they completed the work in a way they considered to be beautiful. At first, Boetti was furious as it would take a long time to redo the work; then he accepted the mistake as an element of chance and went on to have further maps made with seas of all different colours.

Chance plays a huge role in Boetti’s work as a whole, particularly in his postal series. Mole Antonelliana (1975) is an example of some of the postcards he sent and collected depicting the emblem of Turin, the city of his birth. He bought many identical postcards and then sent them back to himself from seven different international cities on his travels. The image is thus of the place of arrival, not that of departure. It is, instead, the stamps that tell the story of the card – and sender’s – voyage.

Aeroplanes are also hugely significant to Boetti. Downstairs is an envelope he once received, covered with ink airmail stamps of aeroplanes. Attracted to the motif, the artist promptly subscribed to Aviation Today, a monthly magazine, and went on to trace the many images of different and new plane models, using them in his works. For example, the two Tutto works upstairs contain a whole confusion of such emblems, traced from magazines: cars, bottles, trees, dogs, scissors, horses, forks, hands, guitars, telephones – objects from everyday life. The result is rather like a forerunner of Grayson Perry’s Walthamstow Tapestry (2009).

Aelleigiaccaleerreobioetitii (1973) is something of a self-portrait, with the letters spelling out the phonetic pronunciation of his name. The ballpoint strokes filling the rest of the page echo the stitch marks of the embroidery works. In Smettere in Moto (1978-79), the commas, left blank in a sea of ballpoint strokes, correspond to letters down the left-hand side of the page, a comparatively simple code, revealing the work’s title. More complexly, a collection of envelopes downstairs uses the stamps, with every nth one inverted, to spell out a secret message: in this case, Eritrea Libere (“free Eritrea”).

The selection of calendar pages included might be an attempt to capture the infinite, freeze a moment in time, frame the sublime. Boetti worked with dates on many levels, sending telegrams at intervals that doubled in length from one to the next, playing with numbers and patterns, managing and compartmentalising time. In one of his series of calculations, he had predicted the date of his death to be 11 July 2023. Sadly, he was wrong and died at the age of just 53 in 1994. 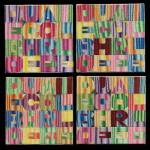