The V&A throws film, photography, prints, fashion, art and crockery into the mix to bring the origin story of Lewis Carroll’s book Alice’s Adventures in Wonderland to life, and explore its enduring impact on visual culture. 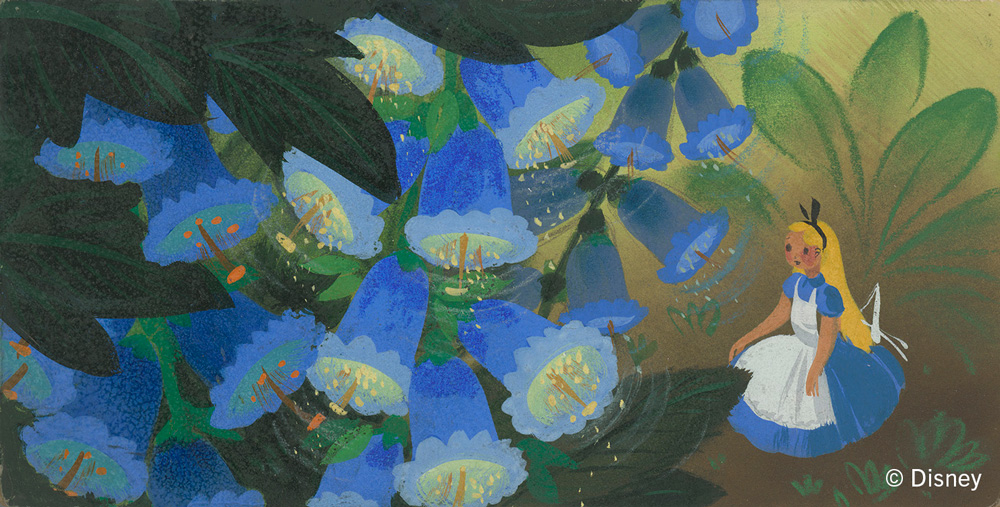 Alice’s Adventures in Wonderland is, by any reckoning, a publishing phenomenon. Since its debut in 1865 the book has remained in print and been translated into 170 languages. It has also been made into countless films (including two for Disney), theatre productions and even a show for the Royal Ballet. What the V&A promises to explore in this show is the influence Alice has had, and continues to have, on artists, film-makers, fashion-designers, photographers and writers. 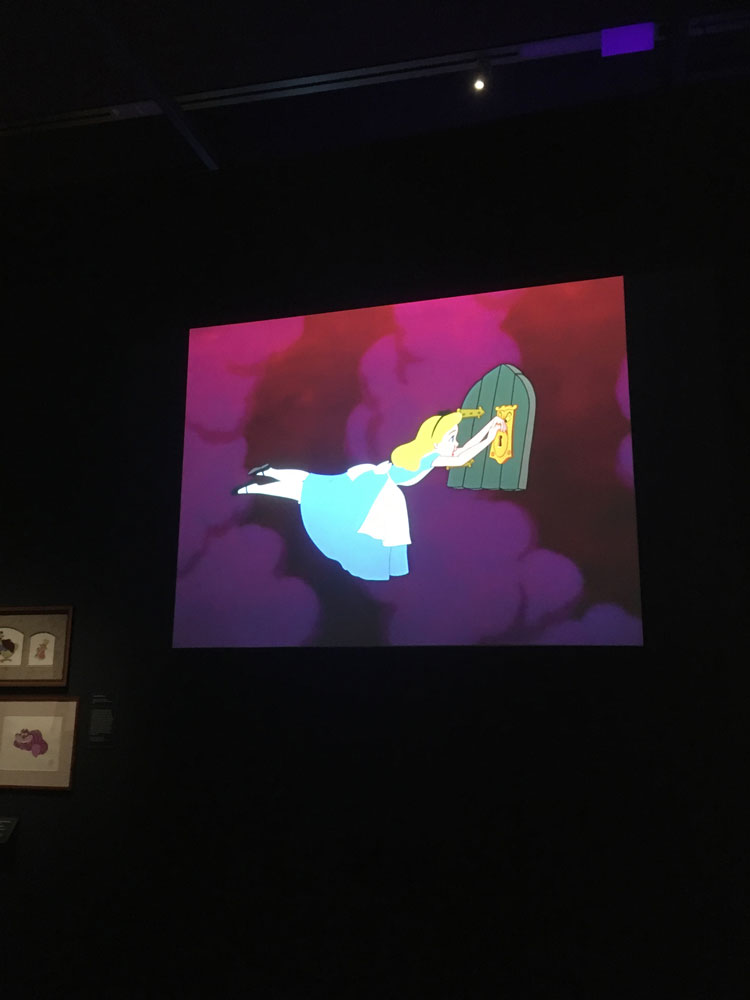 Just as fascinating is the show’s evocation of the cultural and social context out of which the ideas for Alice were hatched, and the two remarkable individuals who placed her journey in words and images on the page. This is explored with forensic attention to detail in the first gallery. Before we get there, however, we have to walk along a passageway that immerses us in the physical and intellectual world of the book’s author, Charles Lutwidge Dodgson, AKA Lewis Carroll, on a particular “golden afternoon” in July 1862. Dodgson, a mathematics lecturer at Christ Church College, Oxford, was punting along the Thames with friends, including three children of his boss, Henry Liddell, one of them a 10-year-old named Alice. He amused them with a story about a little girl called Alice and her adventures, and the real Alice was so entranced, she begged him to write it down. The righthand side of the entrance passageway depicts this leafy waterway with large, collaged photographs, plus a soundscape of oars slapping on water, children playing and birds chirping. Along the opposite wall, the ancient timber library bookshelves of Oxford are summoned, between them representing those twin forces of learning and leisure, which so fuel leaps of the imagination.

The main exhibition gallery is laid out very much like a classic Victorian museum, all glowing vitrines and dark walls. It is here among the objects, prints, photographs, illustrations and notebooks that we learn about the unique intellectual and social context for Dodgson’s musings. He was, as one caption declares him, very much a polymath. As well as being a maths professor, he was a keen amateur photographer and a lover of art, music and theatre, with a social circle that included the pre-Raphaelite painter John Everett Millais and the scientist Michael Faraday, as well as the actor Ellen Terry, whom he championed throughout her career.

But in the wider world, there was so much going on that clearly fuelled Dodgson’s imagination. By the mid-19th century, the Victorians fancied they were experiencing a new Renaissance, with scientific and engineering marvels transforming the way people thought as well as the way they lived, for better and worse, as the Industrial Revolution took its toll on health and working conditions. All this fuelled ideas for social reform, which also found their way into Dodgson’s story, along with his personal interests in logic, word games and puzzles. A multitude of objects and artefacts are laid out as evidence – in a kind of CSI (culture scene investigation?) display - from the armillary sphere, dating from about 1750, through which the sky around the Earth was represented to help sailors map their routes, to a model of the original Crystal Palace at Hyde Park, where the Great Exhibition of 1851 displayed the world’s most exciting design and manufacturing ephemera; Dodgson, after his visit, apparently declared it to be “a sort of fairyland”. Exploration and emancipation are clear themes of the age, from the anti-slavery movement to the birth of women’s suffrage; Dodgson himself was a keen advocate for female education, part of a wider movement, which came to fruition following the Elementary Education Act of 1870, which led to free state education for all.

Along with greater literacy comes more widespread political engagement, and the Victorian era saw the art of satire reach new levels and new audiences, with the launch of Punch magazine, in 1841. A lot of Alice’s wicked humour and surreal twists – certainly those that have ensured the book’s continuing adult audience – are inspired by political satire and it is no accident that Dodgson chose John Tenniel, Punch’s lead cartoonist, as his illustrator. Tenniel was, we learn here, the son of a dance teacher, which is one reason his drawings have such a feel for the performative – and no doubt why his vividly conceived characters have inspired so many different kinds of performance over the decades.

Tenniel’s influence on the enduring appeal of Alice should not be understated. He worked closely on every aspect, and some of his visuals anticipate the special effects later to be conjured by cinema. A year after Alice was published, Dodgson had the idea of writing a sequel, but the illustrator was so busy with other work that he could not commit. Having tried and rejected several other illustrators, Dodgson ended up waiting three years so that Tenniel could shape the next instalment. They began work in 1869, and Through the Looking-Glass was eventually published in 1871; it was in this sequel that Tenniel created Alice’s iconic stripy stockings and black headband, now known as an Alice band, the original sketch included here. The role of the Dalziel Brothers in turning Tenniel’s illustrations into wood engravings is also acknowledged in these showcases. Rarely had a piece of literature, ostensibly for children, had so much time, effort and talent addressed to its presentation and illustration – apparently Dodgson declared the finished book “a perfect piece of artistic printing”, and even paid for the cost of producing it. 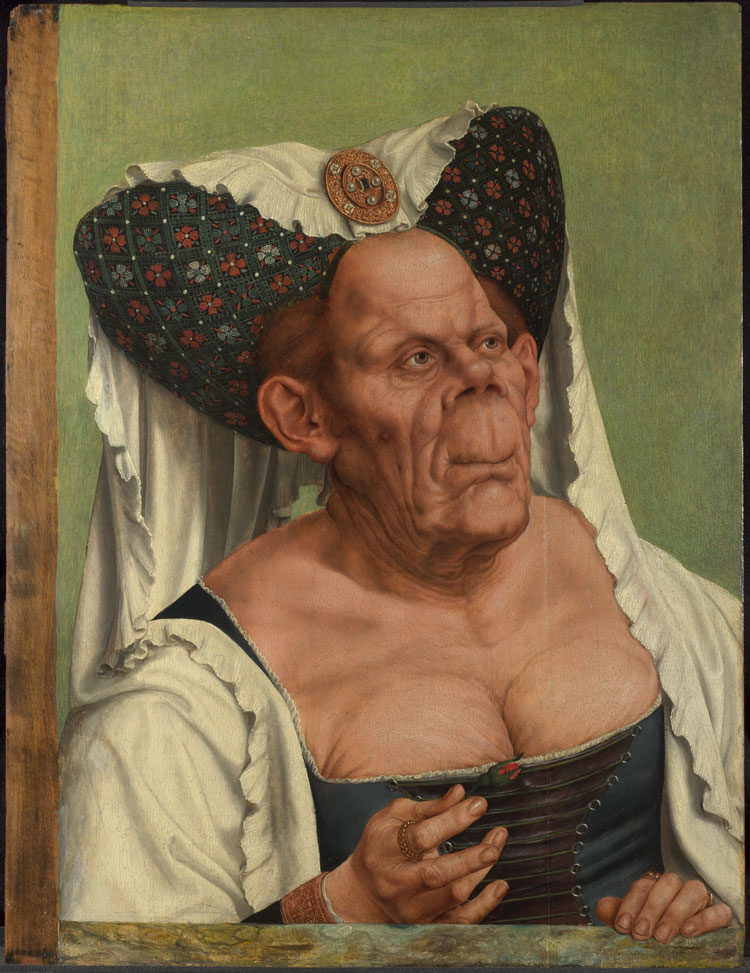 The understanding of madness - another theme running through the first book - was an area undergoing a major shift within the wider context of healthcare reform. Where amusement seekers of 18th-century society might have viewed the antics of those incarcerated in asylums as ripe for entertainment, by the mid-19th century a more holistic and sympathetic approach to care was emerging. Dodgson had an uncle who worked at the Surrey County Asylum, and was known to have visited him there; and this visit may well have inspired his Mad Hatter character and material.

This gallery also reveals how deeply enmeshed the Alice story quickly became within Victorian culture, especially the newly fashionable promotion of “family values” (for which Queen Victoria, her husband, Prince Albert, and their nine children were apparently the role models). A charming painting by George Dunlop Leslie (1835-1921), Alice in Wonderland (1879), depicts a mother reading Alice’s Adventures in Wonderland to her daughter, the child’s face perfectly capturing those characteristic sensations of enchantment and puzzlement that the book provokes. Also in this gallery we see how Tenniel drew on medieval art for inspiration, in the presence of the painting An Old Woman (“The Ugly Duchess”, c1513), by Quinten Massys (1465-1530), a satirical take on vanity. 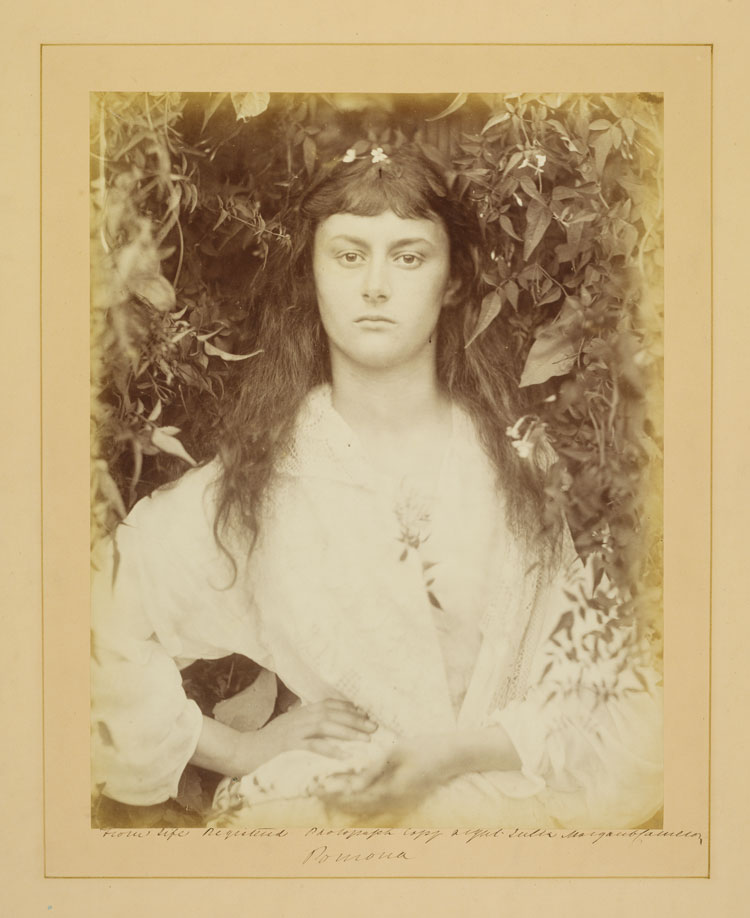 The life of the real Alice Liddell herself is touched on. She grew up among artists, was tutored by John Ruskin, and posed for Julia Margaret Cameron’s now famous photograph, displayed in this gallery. We later learn that it was Liddell’s much-feted visit to America in 1932 that sparked Hollywood’s interest in the idea of filming the story.

The various filmic treatments of Alice – or alternative versions inspired by the book – take up the bulk of the show’s mid-section. We start with the earliest, a 1903 black-and-white film that lasts a mere 10 minutes. A more ambitious one, by the US director WW Young, followed in 1915, lasting 50 minutes and faithfully recreating passages of dialogue via title cards. Actors wore full head masks and elaborate costumes. But we soon arrive at the filmic main event that will have helped to keep the Alice story alive in every subsequent generation’s imagination.

Walt Disney began planning a full-length animated feature in the 1930s, but the second world war intervened. He finally drew on the inspirational concept art of Mary Blair (one of whose illustrations is shown here) and a script that mixed Wonderland with Through the Looking Glass. Released in 1951, it has become a definitive rendering of the Alice story, and a cult classic. In 2010, the director Tim Burton updated the tale with live actors and stunning CGI, for Disney Studios. Sadly, all film versions are severely truncated in this show, shrunk to one-minute clips – perhaps to avoid a backlog of visitors hanging on to every hypnotic scene. 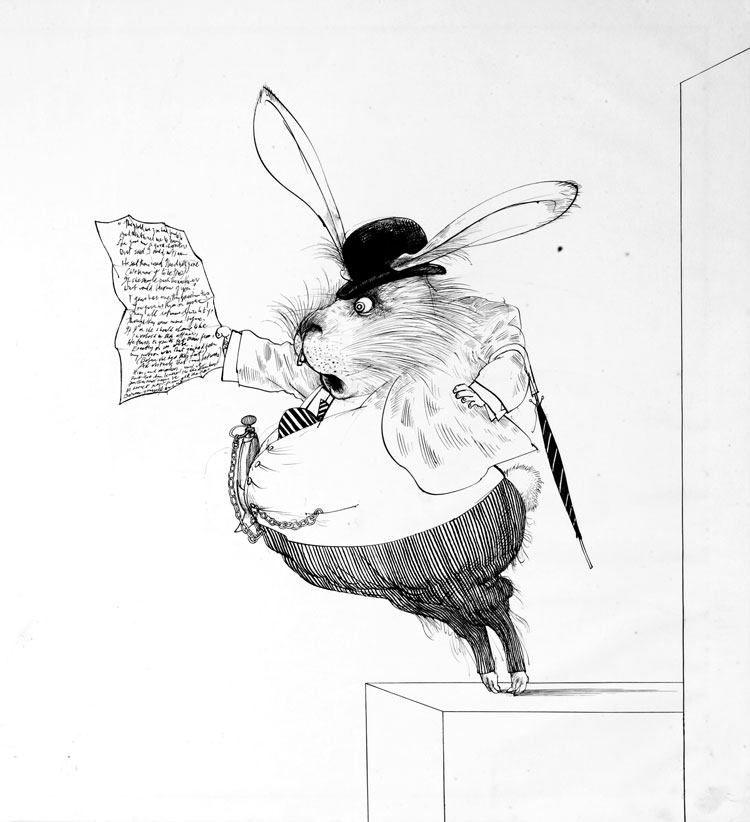 I would particularly like to have seen more of the puppet-maestro Jan Švankmajer’s hauntingly Freudian version (shown small on a screen set into the outside of a fake circus tent). But Jonathan Miller’s BBC production of 1966, complete with sitar music by Ravi Shankar, receives a room-set of its own: a Mad Tea-party clip from the film is played on a loop, alongside an elaborately laid table set for high tea - also a Victorian invention; the display of exquisite tableware reminds one that the V&A is very much a museum of the decorative arts. 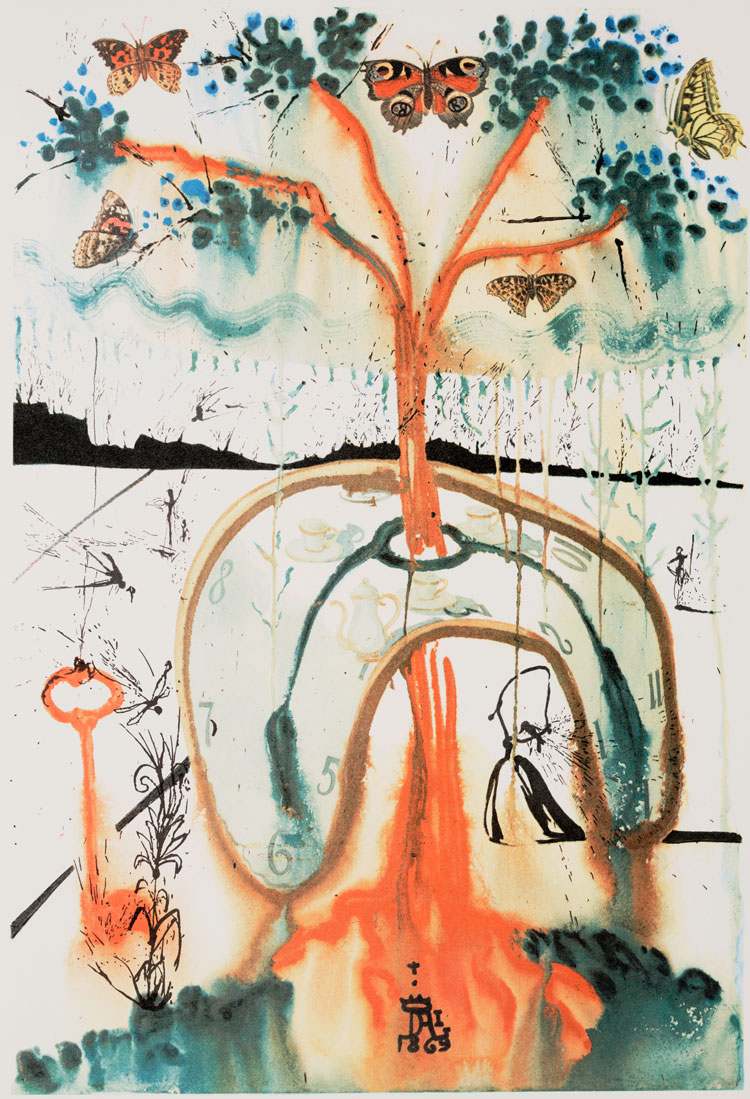 The area addressing the influence of Alice on artists of the early 20th century draws heavily on the surrealists, whose founder André Breton declared in 1924: “Everyone has the power to accompany an ever-more beautiful Alice to Wonderland.” However, we don’t necessarily have the best of those reimagined worlds as evidence. From Eileen Agar, we have a note on Carroll, whom she described as a “mysterious master of time and imagination”, and a “prophet for the future”. In the selection of prints, paintings and drawings, emphasis seems to have been placed on demonstrating how these artists imitated aspects of Tenniel’s imagery, rather than use it as a launch pad for new imaginings. There is, though, a stunning Alice painting from Max Ernst (1891-1976), which depicts her as a young woman seemingly half-consumed by a glowing red, throne-like rock structure, apparently inspired by Ernst’s lover, Leonora Carrington (Alice in 1941). 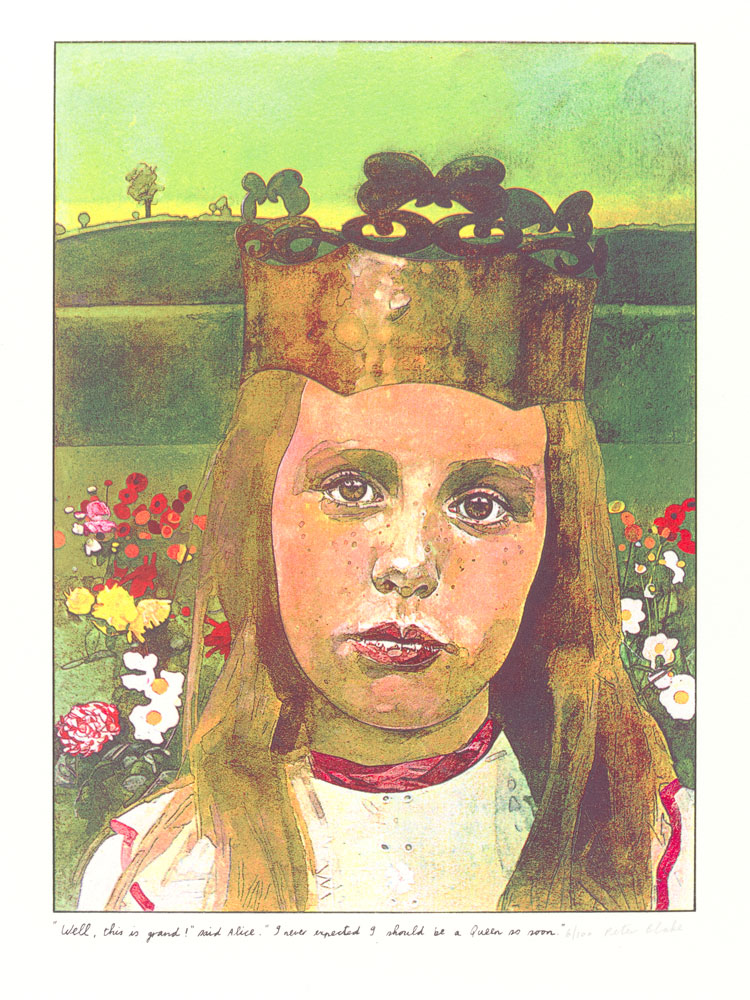 Peter Blake. Print from a suite illustrating 'Through the Looking Glass and What Alice Found There', 1970. All rights reserved, DACS 2019

Alice’s influence on 60s counter culture is evoked with poster art, and striking illustrations from Peter Blake and Ralph Steadman. As we progress to the 21st century, we are treated to a film work by Rachel Maclean, The Lion and the Unicorn (2012), the ornate costumes and fantastical settings of which, juxtaposed with historically accurate legal declarations on the evolution of Anglo-Scottish relations, turn the whole constitutional narrative, Alice-like, into a nonsensical dream. 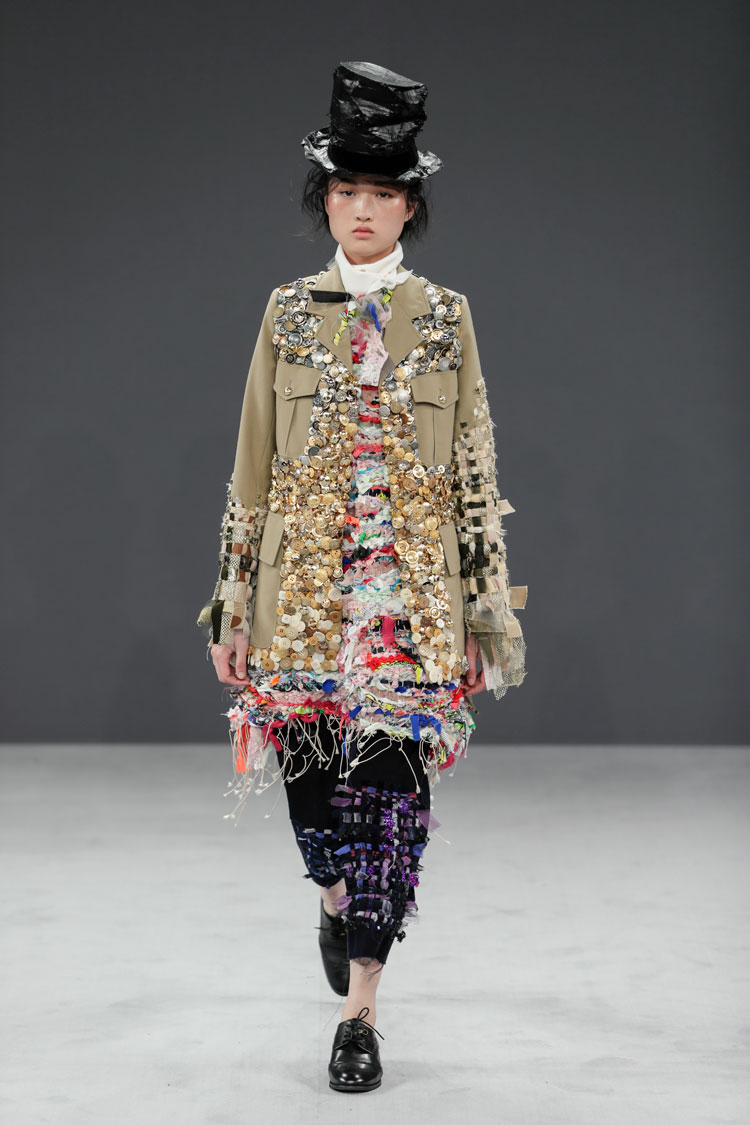 Fashion – another V&A forte – brings a dramatic flourish to the final galleries, offering us highlights from a landmark Viktor & Rolf collection of Alice-inspired costumes, some designs for the aforementioned Royal Ballet version, and a Wonderland sequence of Tim Walker’s photographs. This section concludes with an Iris van Herpen special: a kinetic halo pulses around a feathered creation, titled Infinity Dress and Omniverse Sculpture, by van Herpen and Anthony Howe. 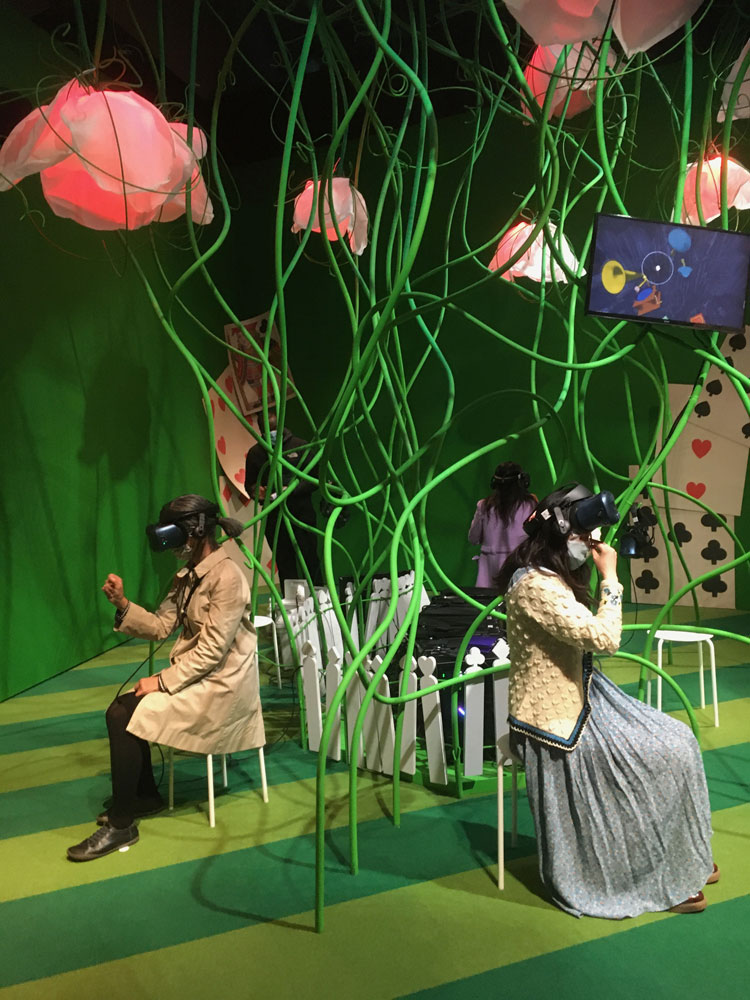 For all the dazzle of these costumes and the momentary distraction of a special VR Alice experience mid-show, it is the acute examination of how this work came into being that lingers in my imagination. Fascinating, little-known details persist, such as learning that Dodgson’s own Alice may have been inspired by an epic poem by his contemporary, Alfred Lord Tennyson, whose Maud, first published in 1855, features a young girl as the main character, with a complex emotional narrative set in a vividly evoked garden filled with lilies and roses. Ultimately, what is most curious of all is that this children’s tale, conjured on a whim by an Oxford academic for one of his friend’s children, has remained fascinating and somehow contemporary to so many for more than 150 years. 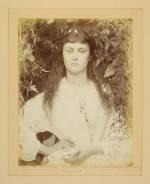 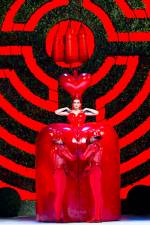 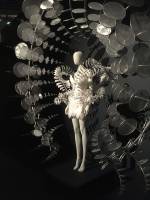 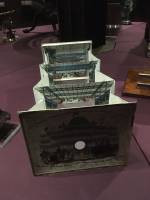 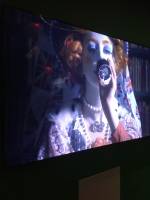