Alice Anderson: ‘I don’t refuse this world, I just need to explore alternatives to live with it today’

Alice Anderson: ‘I don’t refuse this world, I just need to explore alternatives to live with it today’

The artist talks about her unique method of “memorising” and “recording” objects in copper wire, and explains how this helps her to slow down and maintain an intimacy with the world around her

An oversized bobbin and needle, a two-metre wide resplendent sphere radiating a warm copper glow – these stunning, alluring and yet uncanny objects are the work of Alice Anderson (b1972), a French-English artist, whose hair gleams in the same coppery tones as the wire in which these objects are wrapped. Although “wrapped”, I learn, is the wrong term to use. For Anderson, this process of entwining an object, mummifying it, securing it for posterity, is just that: an act of “memorising” and a means of understanding the world around her, keeping hold of the physicality of objects, as more and more of our life becomes subsumed by digital technology.

Currently one of the 14 artists in the Saatchi Gallery’s first all-women exhibition, Champagne Life, Anderson spoke to Studio International about her obsessive practice and her inner drive.

Anna McNay: When did you first begin wrapping objects?

Alice Anderson: I don’t really use the term “wrapping” because my purpose is different. I “record” objects with thread. It is my own method of “memorising” objects in 3D.

I started “recording” in 2010. I believe that this action is one of the instinctive consequences of memory going digital. There isn’t any nostalgia in this approach. It is simply a physical reaction to/interaction with the present: the digital world gives more freedom, information and creativity, but how are we meant to cope with it? This revolution is just beginning and it’s already affecting the whole of society and all its current models – economic, of course, but also social and ideological. I don’t know if it’s good or bad yet, but our everyday life already sources a lot of its basic reflexes from automated information or service-sharing through the likes of Google, Wikipedia, Uber and so on, so I have to find my own methods of slowing down, of keeping a sort of intimacy with the world surrounding me, of understanding –learning – and memorising differently.

It's a paradox, but the more my everyday existence fills up with digital data about the things around me, the greater my need to get to grips with their material, physical data.

AMc: To what extent do you consider your recording process to be a kind of durational performance?

AA: For the sphere, currently on display at the Saatchi gallery, I walked 181 kilometres [hence the title, 181 Kilometers (2015)]. So, for this, the performance was a sort of ritual dance, spread across several weeks. It was a total gesture. I wanted to record the data of geometrical shapes and I started out with a sphere. I circled, then got giddy, but after an hour or two my body adapted and I found myself in another state of mind. It wasn't just my hands moving around an object, but my whole body. I would stop in the evening, but hardly take any breaks during the day. If you take a break, the body adopts a different rhythm. Strength and endurance are what counts. In the beginning, I always had something on my mind or a phone call to make but, after a few hours, the repetition of the gesture takes over and everyday stuff loses its grip on you. There was a sense of disconnection while recording the sphere.

AMc: You originally used your copper-coloured hair to wrap – or record – the objects. At what point did you switch to using copper wire?

AA: In the 90s, I was making films: video diaries in connection with my research into the functioning of memory. As time went by, objects began to take over from characters and I wanted to interact physically with these “object-subjects”. My films offered little scope for this.

In my studio, I was constantly “playing” with objects and, during one of the “dismantling” sessions, I came across an alarm clock with a bobbin of copper wire inside it. That was a sort of trigger.

Copper colour sends out very positive vibrations through its properties of conductivity, which enable connections. I’m thinking of the way neurotransmitters work in the human brain. Another crucial property is its waves of luminosity. During a performance, the copper gives off shiny, hypnotic reflections. When you’re doing a performance, there’s no fatigue – you discover strength deep inside yourself. In the same way that iPads and other screens give off a light that stimulates the brain, the gleam of copper triggers energy.

AMc: You now work on an immense scale. What sort of objects did you begin with? Obviously many of the objects you record now cannot be the actual objects themselves. For example, the three-and-a-half-metre tall cotton reel, Bound (2011), also on show at the Saatchi Gallery, presumably doesn’t have an actual cotton reel inside? Do you make skeletons to wrap your thread around?

AA: Bound is an exception: it is not an object but a totem. It was conceived alongside a body of work called Housebound, made at the Freud Museum after working with Anna Freud’s loom, from which I discovered a peculiar rigidity of threads, lines and grids, which led me to think about geometry. The first large object I recorded was chosen by people in Switzerland: a six-metre canoe, which was woven collectively in 2014.

AMc: How long would it take to complete a piece such as Bound?

AA: About a couple of months because each rope of 25 metres is done separately.

AMc: Do you have any help?

AA: It depends on the nature of the project. I did 181 Kilometers alone, but there were several of us working together for the ropes of Bound.

AMc: Do you ever tire of the process of wrapping?

AA: I don’t work to produce an artwork, but simply to live this digital transformation. I have developed my own way of learning and memorising with thread. It corresponds to a necessity. I don’t refuse this world, I just need to explore alternatives to live with it today.

AA: As I was saying, I don’t “produce” performances – they are just ways of living. Each woven item is a ritual object; the relevance of the object lies in the fact of its being charged/performed with meaning.

AMc: How do you select objects to record? Do you have stories or meanings in mind?

AA: I select an object when I have the feeling that it is starting to fade in my memory and when I feel that I have to “reactivate” it. The selection is a strong commitment because I never undo what I have done and I never buy a replacement object. If I do a scanner, for example, I won’t get another one, so I am committing to living without one.

AMc: What has been the most challenging object you have ever recorded?

AMc: What object would you most like to record?

AA: I am very interested in architecture and objects that have strong meaning in society today. Since Tim Berners-Lee invented the world wide web in 1989 (the same year as the fall of the Berlin Wall), profound changes have been underway with the development of artificial intelligence and the internet.

AMc: At your exhibition last year at the Wellcome Collection, Memory Movement, Memory Object, visitors were invited to join in and wrap/record objects themselves. What was the response to this?

AA: It was a gift to elaborate this exceptional project with the public. The performances were open to all. Everyone was creating their own gestures and body movements and inventing their own “ritual dance” and rhythm around their object. At that time, there was some debate around the future Google car and some people definitively wanted to memorise a car. I was initially thinking of a British brand but they came up with an American one. This also resonated for me, so, with the help of the curator Kate Forde, we found a 1969 Ford Mustang and got started. In less than three months, it was done. The incredible public commitment, the connections between different cultures and communities, was amazing.

AMc: What does it mean to you to be included in the Saatchi Gallery’s first all-women exhibition? Do you feel your gender plays a role in your art? Have you had to work harder than your male peers to get where you are?

AA: No matter if you are an artist or not, gender still has a significant weight in how things balance out in our society. However, I am quite obsessive with my work and I believe any signal sent out through this work will speak for itself.

AMc: What is next for you?

AA: I am now developing time capsules in recycled steel. I had lots of people donate objects to the studio, which they want to keep for the future. The results are sort of minimalist or primary geometrical shapes, dictated by the object inside. I’ve just done my first series: Recklessness. These times capsules contain outdoor Parisian cafe furniture that I selected in Paris after November 2015. 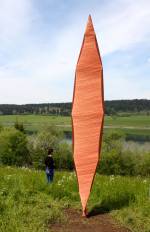 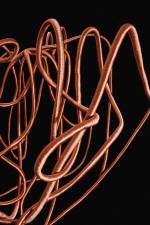 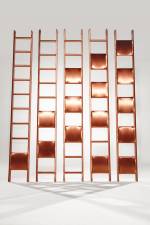 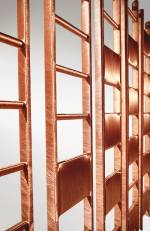 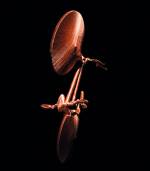 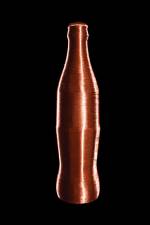 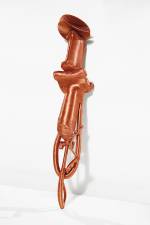