Ali Kazim – interview: ‘When I picked up a pottery shard and it had some imprint of the potter, it was a sort of time travelling key for me’

Ali Kazim – interview: ‘When I picked up a pottery shard and it had some imprint of the potter, it was a sort of time travelling key for me’

The artist talks about looking to ancient civilisations for inspiration, why he doesn’t like working with a sitter in his studio, and how his practice changed during lockdown 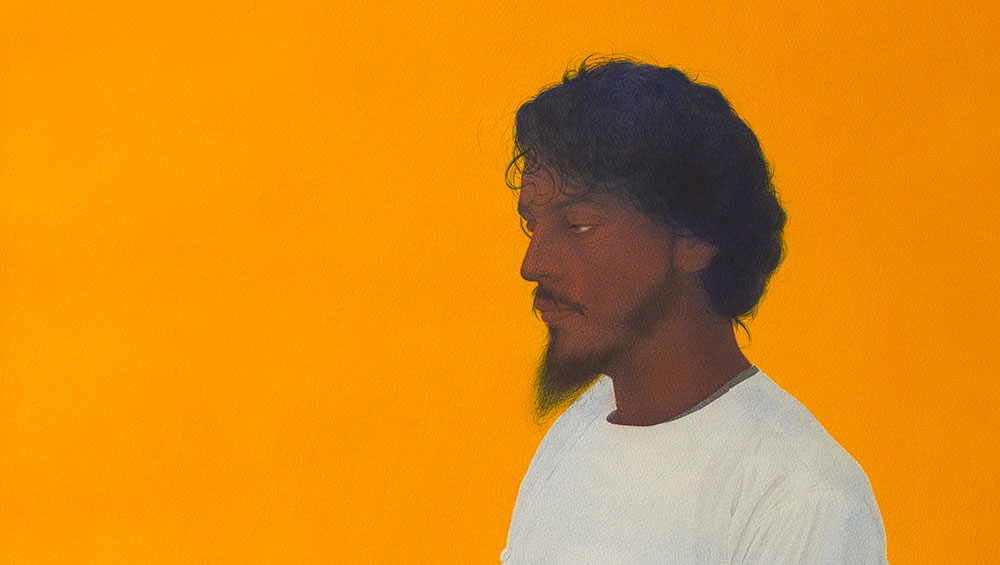 Enigmatic, stirring portraits are the mainstay of Ali Kazim’s practice. Working predominantly with layers of watercolour pigment washed and reapplied, he captures, with meticulous care, isolated south Asian figures foregrounded against empty backgrounds or bold colours. Caught somewhere between a staged portrait and an intrusion on a private moment of rumination, his depictions are assertive yet fragile. It seems an affront to be looking at them, but it is a compulsion you cannot resist.

His landscapes share the restrained feeling of his figures. With a pared-back palette, he presents swathes of northern Pakistan’s terrain littered with fragments of ceramic. You can tell Kazim has spent considerable time at these sites. He treats the rough shards with sensitivity and is pedantic with each undulation of the earth. In doing so, he evokes the communities that once peopled and used this land. 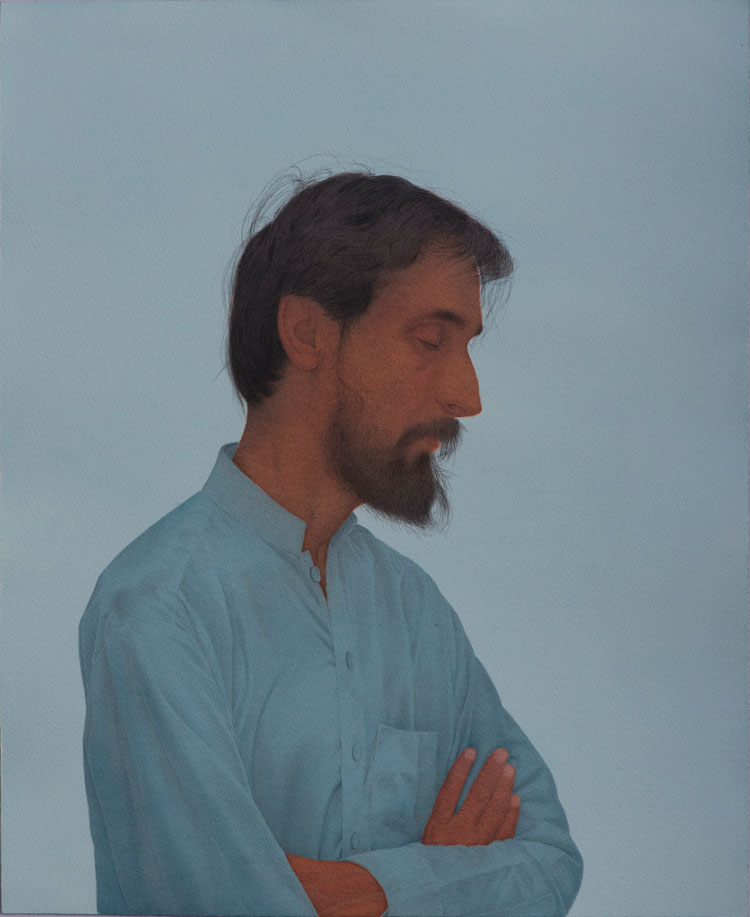 Kazim, who was born in Pakistan in 1979, began his career there as an apprentice for a painter of circus hoardings. Following a short time working in nursing, he undertook a degree in fine art at the National College of Arts, Lahore, before doing a master’s at the Slade, London. His work has been exhibited widely in solo and group shows internationally, including at this year’s Lahore Biennale, the Como Museum of Art in Lahore (2019), the 2019 Karachi Biennale, and the Ninth Asia Pacific Triennial of Contemporary Art in Brisbane (2018). He lives and works in Lahore, where he is also an assistant professor at the National College of Arts.

Kazim spoke to Studio International about his interest in ancient civilisation and the visual conduits of faith, as he prepared for his solo show next year at the Ashmolean Museum in Oxford.

Cleo Roberts: Last year, you were at the University of Oxford undertaking a residency with the Classical Art Research Centre that will culminate in an exhibition at the Ashmolean Museum next year. This came about from your longstanding interest in ancient civilisations and the figurative artefacts left behind. Can you pinpoint a moment when these material cultures began to shape your practice?

Ali Kazim: It was after my BFA at the National College of Arts in Lahore, which wasn’t figurative, that I started going to museums and found this figure from the Indus valley civilisation called a Priest King. It’s a very small statue made of soapstone. He has a large jaw, very short forehead, a trimmed beard and wears an armband, a headband and a shawl. For me, it was an excellent portrait and my reason to start drawing portraits. I drew it and, at some point, I converted those into a full portrait of the Priest King. From there, my figurative work started. You can see the Dravidian race present in that figure – there are distinctive features. I started making portraits of people who shared features with this race.

Then coming to London and studying at the Slade, I found the city had more to offer than the school. The city has hundreds of galleries and museums, and I could see the works that I had previously had access to only in books. Seeing these things had an impact on my practice. I spent time looking at the terracotta works from the Indus and Mesopotamia – I was taking lots of pictures. It wasn’t until I was back in Pakistan and started visiting the unexcavated sites of civilisations that I realised that what I was looking for was in the past.

CR: Your Ruins series (2015) depicted Pakistan’s landscapes scattered with ceramic fragments and the traces of ancient craftsmanship. These drawings are deeply sensitive and make us aware that these areas are current as well as past ecologies. How does this work relate to your portraiture?

AZ: For me, those landscapes are not really landscapes, but a collective portrait of the people who lived there. I was more interested in creating a fictional narrative for those people with those pottery shards. I wasn’t interested in making a scientific or archaeological painting, but in creating something vaguer and giving more liberty to the viewer to make their own narrative through it. It wasn’t really landscape, but about people again. The pottery shards have a physical imprint of the people who made the pots or small statues. Their fingerprints are there. It was unreal when I picked up a pottery shard and it had some imprint of the potter – I felt it. It was a sort of time travelling key for me. I wanted to pick up on this narrative.

CR: Alongside these images, you created a collection of floor-based steely meteoric chunks made from ceramic. They are skin-like, with faint veins and creases. What were you trying to achieve with that medium?

AZ: When I visited those sites, everything was terracotta. So I started working with clay. I was going through a phase when I was making heart-like forms, which can break quite easily. I made some objects that had fallen from outer space, but they are still familiar and close to bodily forms.

During quarantine I worked more with clay. I began my day throwing a couple of pots. I’ve started making something related to the Gandharan relics. Previously, I was just throwing one or two pieces to get myself physically and mentally into the right space. It allows me to somehow move more freely, I feel more comfortable. After that, I’ll start drawing. 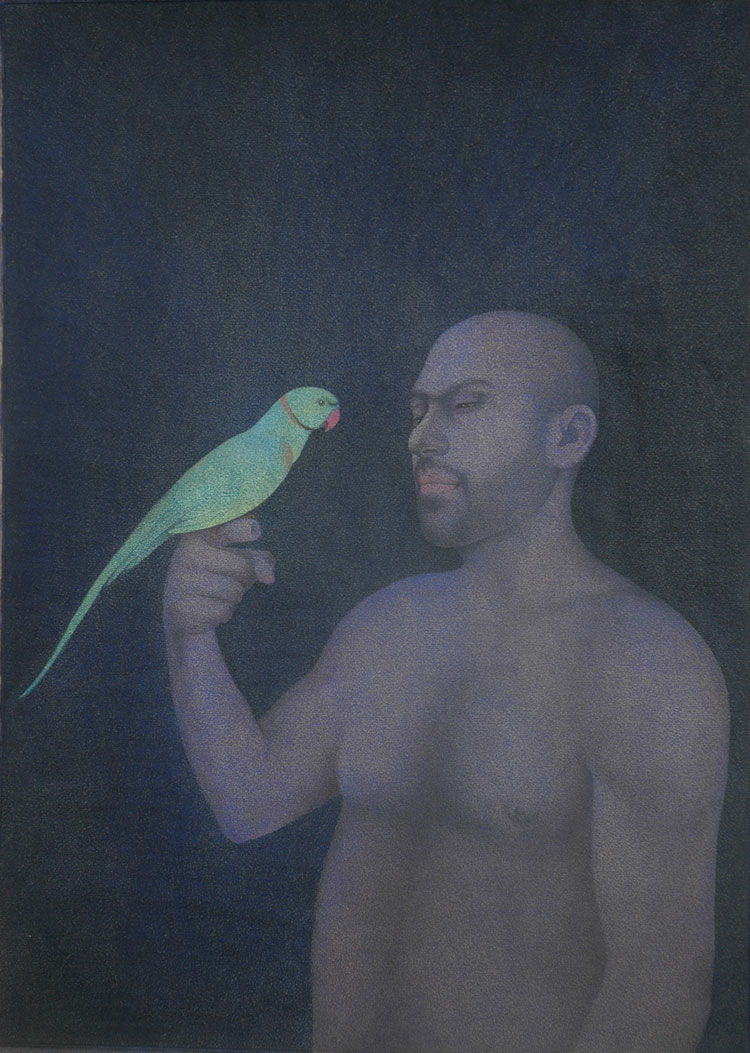 CR: Draughtsmanship is the foundation of your exquisite portraits. These are often south Asian men isolated and set against backgrounds devoid of signifiers. Why are they emptied out?

AZ: I feel adding things gives a time and loads things. I was trying to avoid those elements deliberately and make something timeless. Visually, I think since my BFA time, I was looking at Company School drawings, where the subject is just in focus and everything else is left. All the required information is within those shapes, the shape of a petal, and the space is left empty. I feel the absence of external elements; for instance, urban settings or even the light would make one aware of the time and era and fashion. Somehow, I like that timelessness in the work. But in new works, I’m letting a few elements go and I will see how it works.

CR: These figures are, for the most part, shown in profile, often at angles and off centre. Rarely do you see beyond their torso. Does this framing add to the sense of a suspension of time?

AZ: I really enjoy making the image within the space more monumental. I like leaving the space for the viewer to look at, but the portrait not looking back. The viewer is carefully examining the details, the skin, but the portrait itself is not engaged. I like the figures being lost in their own world and not making eye contact with the viewer. The viewer is left to gaze without being conscious of the figure looking back at them. 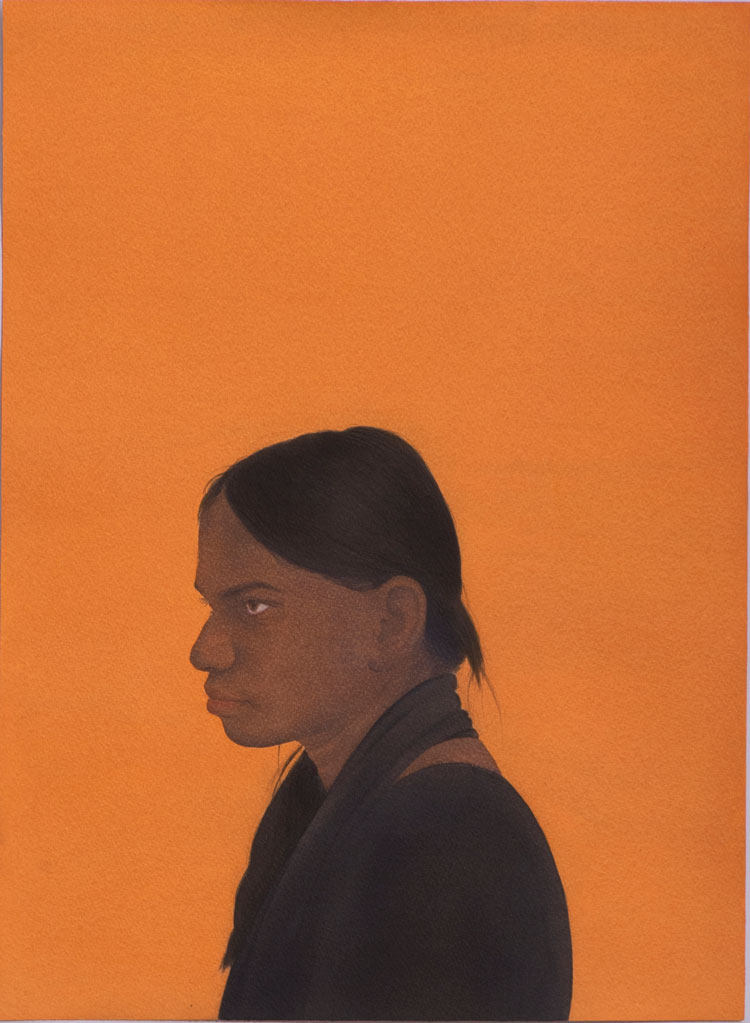 CR: The details you mention are granular. You see all the individual pigments and pockmarks which comprise the skin. It reminds me of Ellen Altfest’s work. How do you accomplish this effect?

AZ: I love Ellen Altfest’s work. She’s one of the artists whose work I ritually show to my painting students, as well as that of Doris Salcedo, Vija Celmins, Kiki Smith and many more.

Initially, I made portraits with graphic inks, but I found the colour faded. I wanted to work with more permanent material, but found acrylic had a plastic look and oil paint didn’t interest me. I wanted to make earthly figures, so I started experimenting with powder pigments. I couldn’t find any practitioners around me who were working with them, so I looked at the work of the Bengal School watercolourists, such as Abdur Rahman Chughtai. They applied very thin washes of different colours, then removed them and applied another layer, to build tactile surfaces. I learned a lot from observing these works, which are in Lahore’s public collections at the Alhamra Art Museum and Lahore Museum.

CR: I imagine achieving this involves intense scrutiny. How do you view your sitters? Are they subjects?

AZ: Somehow, I feel some unseen pressure if the subject sits for me in my studio while I’m working. I prefer working alone, using photographs or, photocopies as reference material. I take photos while I wander around in cities, or invite the person into my studio if I know him, just to take a few photos. It gives me a certain freedom to manoeuvre the images without being conscious of the sitter. I think after drawing a basic structure, the struggle becomes more about the work. At some point, I start playing with the tones and colours and let the medium set a tone for the work. 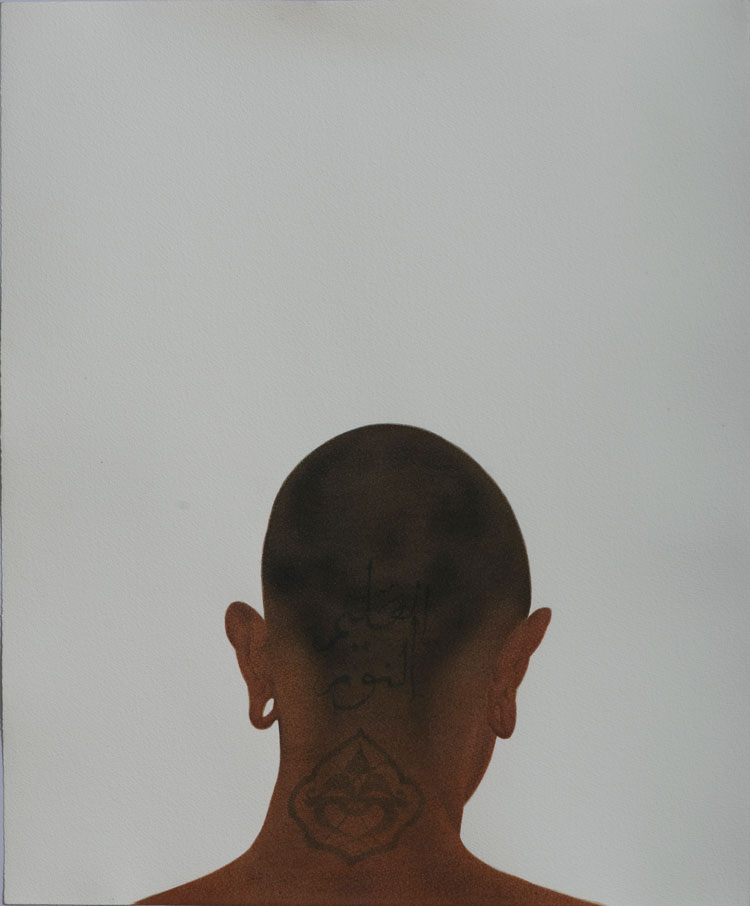 CR: You do sometimes give the viewer hints about these figures. For example, your Woman of Faith and Man of Faith series (2018-2019) position these people. What does faith mean to them and you?

AZ: I find it fascinating how beliefs slowly become a more obvious element in one’s identity. Perhaps, in some cases, they become the first thing one notices. For instance, appearance-wise, in many cases, a conventional religious person stands out more in a group of people. Of course, the situation is more complex in a Muslim majority country (or any state where one group is in a majority; people whose beliefs are different, struggle more to uphold with their identity. My work Untitled (Woman of Faith series) (2019) is based on someone I know. She is from a community who make up just 2% of the population. I was fascinated to notice how, every day, I would see her clutching a transcription of the Bible. She wasn’t reading it, but was holding it. The Bible was always next to her in her studio. It makes me think of the complex situation one goes through to maintain his or her identity.

CR: Does this link with the work you were doing in Oxford – those are faith figures. Do you see a link between your faith series and your time at the university?

AZ: Take a Gandharan piece such as Fasting Buddha – it’s very hard to take one’s eyes off that statue. There is so much love in it and the religious devotion that led those artists to make something on that level. These things have an impact on the art form, the intention is felt in the work.

CR: Gandharan art has a relationship to Roman art. Is that confluence part of its appeal?

CR: Are the symbols very evident?

AZ: Drapery, yes, and other forms are so recognisably from Rome.

CR: Will elements of this aesthetic creep into your work for the Ashmolean exhibition in 2021?

AZ: Even before, I was inspired by the simplification of the Buddhas of the Gandharan sculptures. To understand this, I started making very detailed studies of the Fasting Buddha, which is in the Lahore Museum. It’s one of the most famous and recognisable pieces. I’m going through all the details just to understand the form and for my own learning. I’m trying to understand the simplification of this piece. Maybe when I’ve finished the production of my Ashmolean show, it will have an impact on my practice. 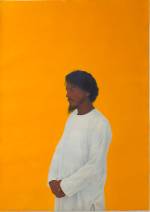 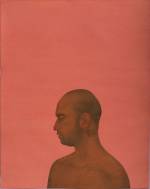