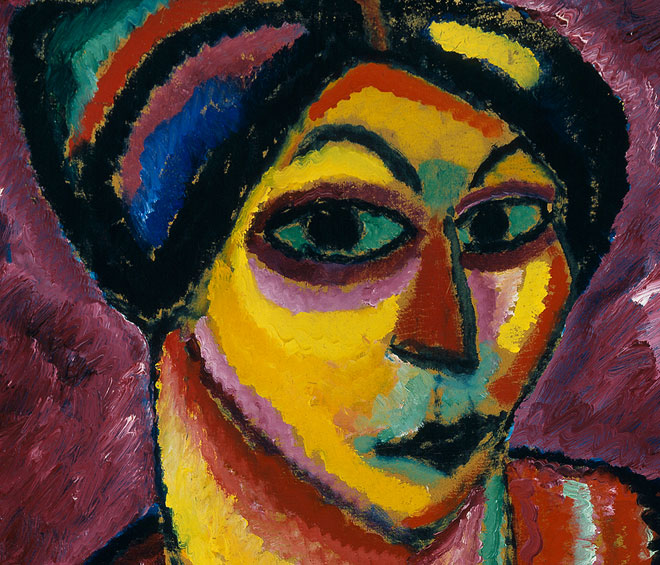 This exquisite exhibition of the Russian-German painter Alexei Jawlensky (1864-1941) is his first retrospective in the United States. Curated by Vivian Endicott Barnett, it brings together nearly 80 paintings, spanning the entire career of this well-travelled and multicultural, but introspective artist. Born in a provincial town in Russia and buried in Wiesbaden, Germany, Jawlensky was close to many of his well-known compatriots and colleagues who either migrated to Germany or resided there, including Wassily Kandinsky, Gabriele Münter, Paul Klee and Ferdinand Hodler. The influence of these artists becomes manifest in Jawlensky’s work at various stages of his career. In fact, his art may be considered a life-long meditation on the process of change in his personal life: from boyhood to manhood; from apprenticeship to mastery; from representation to abstraction. Throughout these stages, which relate more to his own personal transitions than to those of his style or the world around him, Jawlensky remained strikingly faithful to certain fundamental aspects of representation: the choice of medium – painting; genres – portrait and landscape, rarely still life; and the format – all rectangular, medium-sized canvases rarely exceeding two feet (0.6 metres) in either height or width. As an artist, he mastered his craft, but his main interest always lay in the exploration of his personal relationship with a subject.

The close relation of Jawlensky’s life to his art is evident in the masterful hanging of the show, which displays his lifetime painting practice in four rooms, arranged in roughly chronological order. The rooms encircle a hallway, which displays the timeline of the painter’s life and career. The exhibition begins with early paintings, done shortly after Jawlensky moved to Munich and became a student at Anton Ažbe’s studio. Here, we see his confident Self-Portrait with Top Hat (1904), painted in the manner of Van Gogh with a whirling flurry of thickly shaped brushstrokes defining the figure’s facial features, and the portraits of his companions, artist Marianne von Werefkin (1860-1938) and her maid Helene Nesnakomoff (1881-1965). Jawlensky met von Werefkin in Russia through Ilya Repin, a famous Russian realist painter. He lived together with her for many years, at the same time developing an intimate relationship with Nesnakomoff, who would later become his legal wife and the mother of his son.

Several other works in the first gallery are landscapes and portraits that reflect places and people that surrounded Jawlensky in his travels through Europe. They betray a strong influence of Van Gogh in style and subject matter. Portrait of Marie Castel (1906), for example, is a painting of a young Breton girl in a traditional dress, reminiscent of Van Gogh’s much earlier paintings in its subject matter. Unlike in Van Gogh, however, Jawlensky’s woman does not come from the dark side of the earth with its bleak, austere palette; there is no wrath and pain in the stare with which the face on the canvas fixates the viewer. Instead, Marie Castel’s gaze is iconic in its timeless and meditative nature, framed by a stark contrast of bright-orange background and the blue of the dress. As in many works of this period, Jawlensky’s masterful application of Van Gogh’s fluttering brushstroke defines the sitter’s features.

As the viewer moves through the galleries, it becomes evident that the timelessness of Marie Castel’s stare turns into one of the hallmarks of Jawlensky’s subsequent works in this genre, because the direction of the sitter’s gaze determines much of the painting’s message. The message of the work depends on whether the model’s gaze is straightforward or to the side – as in three-quarter view portraits – or shut down completely – as in several portraits beginning with the early 1910s. In the room with the early portraits, Dark Blue Turban (1910), an arresting representation of Nesnakomoff wearing a red dress and supporting her head with her arm, is one example of a side gaze directed at the viewer. Here, we are engaged in a silent confrontation not so much with the painting, but with the model, in which she provokes us with her enticing look. In the early portraits where the model’s eyes are turned away, as in the two Hunchbacks from 1906 and 1911 respectively, there is no such confrontation. Here, the sitter becomes an object for our observation and pitiful sympathy. In portraits with closed eyes – as in Girl with the Green Face (1910) or Helene with Colored Turban (1910) – the subject becomes the sitter’s “inner gaze”, her spirituality.

Later in his life, Jawlensky continued with the portraits, paying particular attention to the iconic and “inner gaze” variations. His large heads and big eyes in such paintings as Woman with a Green Fan (1912), Byzantine Woman (1913), or Spanish Woman with Closed Eyes (ca1913) predate his Mystical Heads and his Saviour’s Faces series, dated from 1917-1918 and 1919 respectively. The distinguishing feature of the heads and faces depicted in these works is, again, their stare: they shut down all communication with the viewer by either gazing through her into the distance or having their eyes closed. Impersonality appears to be the most prominent feature of these portraits and heads, even though, according to Barnett, many are modelled on people close to the artist – such as Nesnakomoff, the dancer Alexander Sacharoff (1886-1963), or his ardent promoter Galka Scheyer (1889-1945). In the 1920s, towards the end of the artist’s life, the heads became completely abstract, with the eyes closed, and no reference made to any living person. They differed from each other mainly in palette and slightly in design with the oval outlining the face more or less visibly, or the lines indicating the slant of the eyes traced more or less horizontally.

The tendency toward the artist’s personal relationship with his subject is also evident in the landscapes, most of which are gathered in the second room. Here, the earliest scenes date from 1908, when Jawlensky was visiting the Bavarian village of Murnau alongside Kandinsky and Münter. At that time, his style recalls the manner of either one of his painting companions in its motley patches of colour representing people and things. Jawlensky found his own expression in the genre of landscape only when he and his family escaped into Switzerland from Germany, the country where they were declared enemy aliens after the beginning of the first world war. They ended up renting a tiny house in the village of Saint-Prex, where Jawlensky did not have a room of his own. Perhaps searching for escape from his involuntary exposure to everyday life going on around the house, he began a series of views from his window, with a path going into the distance, the trees framing it, the sky and the lake in the distance. The first such painting, Variation: The Path, Mother of All Variations, was completed in 1914. Subsequently, Jawlensky painted several Variations on this subject, most of them from memory. Becoming more abstracted over the years, these landscapes eventually became unrecognisable as such, the level of abstraction reflecting in their titles  for example, Variation Spring Mood (1916) or Variation: Chords in Reflection (ca1917).

Remarkably, toward the end of his life, when Jawlensky’s hands were crippled by arthritis and he had trouble holding the brush, the artist found a way to integrate his portraits with landscapes in painting Meditations. These works, spanning the period from 1934 to 1937, are composed of vertical and horizontal brushstrokes of multicoloured paint, with the prominent vertical and horizontal lines forming a cross in the centre of the canvas. The paintings remind us both of the Abstract Heads of yesteryear and the closed widows of previously wide-open and explorative Variations. According to the writer and curator Jill Lloyd, Jawlensky painted nearly 1,000 of these works,1 of which the exhibition contains just a few. Gathered in the last room and accompanied by Bach’s music, which the artist frequently listened to while he worked, they act as a poignant conclusion to Jawlensky’s lifelong exploration of his spirituality. 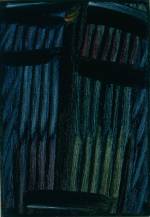 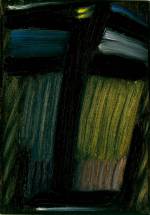 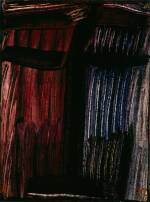