Prager revels in cliche and it is clear from the large Technicolor photographs and the handful of films shown here that subtlety holds no interest for her. I am left wondering what it is that she intends to add to the conversation 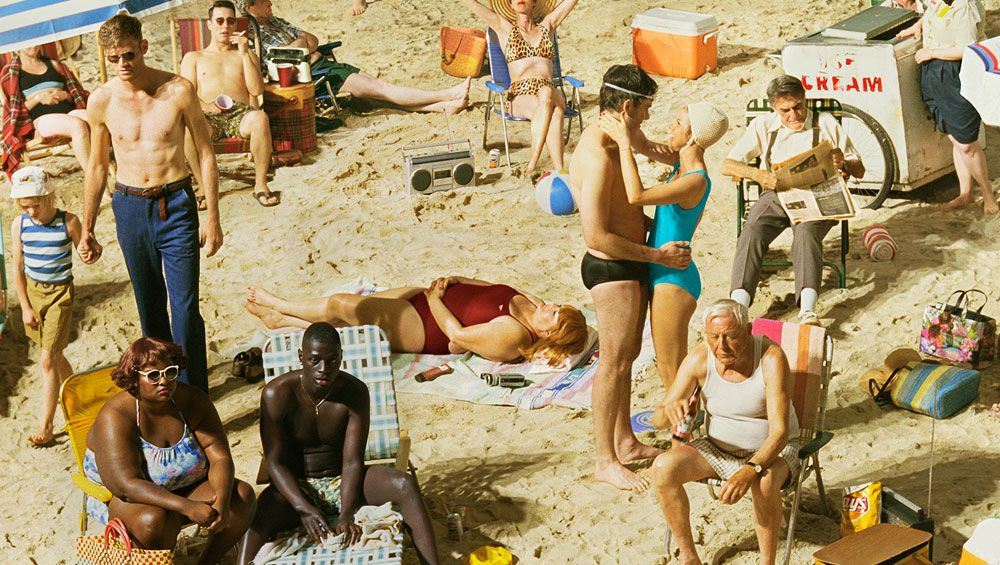 Photographer Alex Prager grew up in Hollywood. Around the corner from her house on Sunset Boulevard was a mural in which film stars fill the seats of a movie theatre. No matter that they are poorly painted: the subjects are immediately recognisable by their costumes. Occupying the front row seats are Marilyn Monroe in her famous white dress, Charlie Chaplin in his trademark bowler hat, and James Dean in a white T-shirt and blue jeans.

Born in 1979, Prager began taking photographs in her 20s, after what she has described as a “mundane, depressing cycle”: working in a variety of nine-to-five jobs, using her income to buy clothes, and periodically selling off the contents of her wardrobe to cover the bills after handing in her notice. A chance visit to the Getty Museum, where an exhibition of photographs by William Eggleston was on display, presented her with a hitherto-absent sense of purpose. Inspired by Eggleston’s photographs of mid-century Americana, she bought herself a professional-standard camera, some darkroom equipment, and a how-to guide to developing your own photographs.

The rest, as they say, is history – and with Prager, history is the operative word. The crudely hewn nostalgia on display in the mural on Sunset Boulevard is apparent everywhere in Alex Prager: Silver Lake Drive at The Photographers’ Gallery in London. Her first retrospective to date, it is filled with mid-century archetypes from the silver screen: fat-cats in braces, frightened blondes in period skirt-suits, bronzed body-builders wearing nothing but budgie-smugglers, cowboys and greasers and nerds, all gathered together on crowded platforms and beaches, in theatres and train carriages, and other cinematic settings.

Prager belongs to a lineage of American artists who have made the crossover from commercial to fine arts: Andy Warhol chief among them. Six months after purchasing the equipment needed to develop her own photographs, she hung her first exhibition in a hair salon. In the years since, she has made a name for herself on the commercial circuit – shooting for clients including Vogue, W, and the New York Times Magazine, and winning an Emmy in 2012 in the process. A 2017 feature for W, David Lynch’s Heroines Like You’ve Never Seen Them Before, doubled-up as a homage to Lynch and an advertisement for high-end necklaces. The female stars of Lynch’s films and TV shows – masterclasses in exactly the ilk of weird and wonderful American chic that Prager is drawn to – were shown as mannequins in a window display: Laura Dern in Cartier, Naomi Watts in Lagos, Patricia Arquette in Tiffany & Co.

Prager’s work has also been embraced by the international museum circuit, and her resume includes exhibitions at the Foam photography museum in Amsterdam (2012) and the Museum of Modern Art, New York (2010). On show at the Photographers’ Gallery are two floors of large Technicolor photographs and a handful of films. Homages to Hollywood come thick and fast. Alfred Hitchcock’s The Birds (1963) clearly inspired the photograph The Big Valley: Eve (2018), in which a woman in a blond wig and pale green suit throws her hands up in alarm at the sight of a flock of pigeons. The film Despair (2010), which stars Hollywood actor Bryce Dallas Howard playing a woman who falls to her death from an apartment building, ends with a spotlight illuminating a pair of red high-heeled shoes. It isn’t subtle, but subtlety clearly holds no interest for Prager, who revels in the familiarity of cliche.

In this respect, Prager is an artist for her times. Her photographs belong to an era in which every conceivable trope, history, or fashion is available at the click of a button; an era in which careers can be built on the distillation and polishing of pre-existing aesthetics; an era in which everything may appear possible, but often also appears to have already been done. One route out of this fudge is to produce endless variations on tried-and-tested themes; to try to do what has already been done, but better. The problem is that this often places the arts behind other areas of cultural production, which are also engaged in the same pursuit of “hindsight perfection” – industries that have larger audiences and budgets, and which attract a wider pool of creative talent. After all, when it comes to distilling the aesthetic of mid-century America in all its unnerving, sleazy glamour, what could compare with the TV series Mad Men, or David Lynch’s Twin Peaks?

Trying to out-style Mad Men, or out-weird Lynch, is like trying to beat an on-form Serena Williams on serve, and, at times during the exhibition, I am left wondering what it is that Prager intends to add to the conversation. On the pages of magazines, her photographs excel, creating sumptuous and accessible settings with which to elevate featured products and celebrities. But on the walls of a gallery, without the necklaces or the stars, the photographs feel oddly vacant. At various moments, I catch myself looking in vain for the captions explaining who made what and how much it costs.

In The Big Valley: Susie and Friends (2008), for example, skinny young white women in bikinis smoke cigarettes and drink cans of Budweiser in a swimming pool. It is the sort of scene repeated ad infinitum in films about the movie and music industries – that scene in which an older male producer invites budding actresses back to his condo for a party. In the pool, there are blondes, redheads and brunettes, but other than not much differentiates, or activates, the women. “They’re briefly likable in their total familiarity but ultimately unpleasant, coarse,” the critic Roberta Smith wrote of Prager’s work in a New York Times article in 2014. An accurate description, but I wonder if the photographs in Silver Lake are coarse or unpleasant enough: they offer little to take the viewer beyond simply recognising an already-familiar look, and into a deeper relationship with the aesthetic Prager is reproducing.