The Jewish painter escaped Nazi persecution in his native Austria and moved to Cornwall, but his haunting art is testament to the mental torment that pursued him 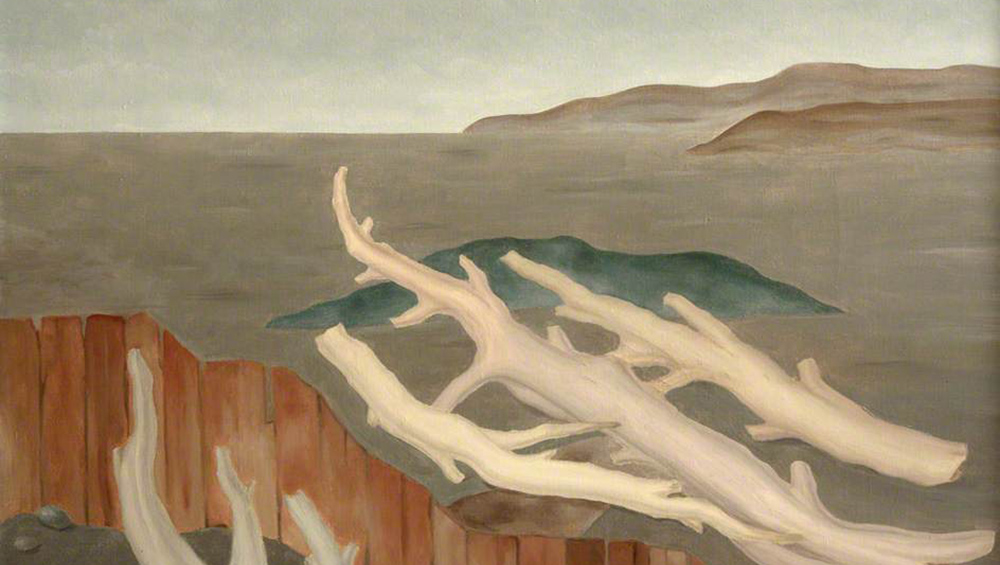 The horror of being forced to flee your home due to state persecution is unimaginable to most of us, let alone losing all your possessions, your professional reputation and even family members. Like so many Jewish émigrés who fled Hitler’s regime in the 1930s, Albert Reuss (1889-1975) suffered all of this, arriving in England in 1938 following the annexation of his native Austria. It was a horrendous time for the painter and sculptor, whose forlorn postwar canvases are infused with the trauma of being uprooted, displaced and dispossessed. Installed amid the grandeur of Truro Cathedral, this small selection of Reuss’s work from the collection of Newlyn Art Gallery has been organised to mark Holocaust Memorial Day. Observed on 27 January in the UK, the day is dedicated to the remembrance of the millions of people who were murdered by the Nazis in the 1940s, and those who have died in subsequent genocides in Cambodia, Rwanda, Bosnia and Darfur. While Reuss was able to escape the Nazi death camps, he suffered with the emotional and psychological wreckage of his exile for the rest of his life. His haunting art is a testament to that torment.

Reuss’s prewar canvases were anything but bleak. Opening the exhibition is The Carinthian Family (Die Kärntner Familie, 1932), which features vibrant, iridescent colours and a heavily worked surface. Painted using a palette knife, the picture depicts a family that Reuss and his wife befriended during their visits to Carinthia in the eastern Alps. But, filled with detachment and alienation, this is not a conventional happy family portrait. The seated father, deep in thought, is overshadowed by his young son who stands in the foreground, dominating the composition. Indeed, the pensive-looking boy appears oversized in comparison with his sister, who, with a jaded expression, slouches awkwardly. The mother turns her back to us, gazing out of the hazy window at an indistinct view. The painting’s strangeness is compounded by Reuss’s paint handling: areas of patchwork colour seem to blend into one another while, elsewhere, thick accumulations of pigment give way to gossamer-thin passages. 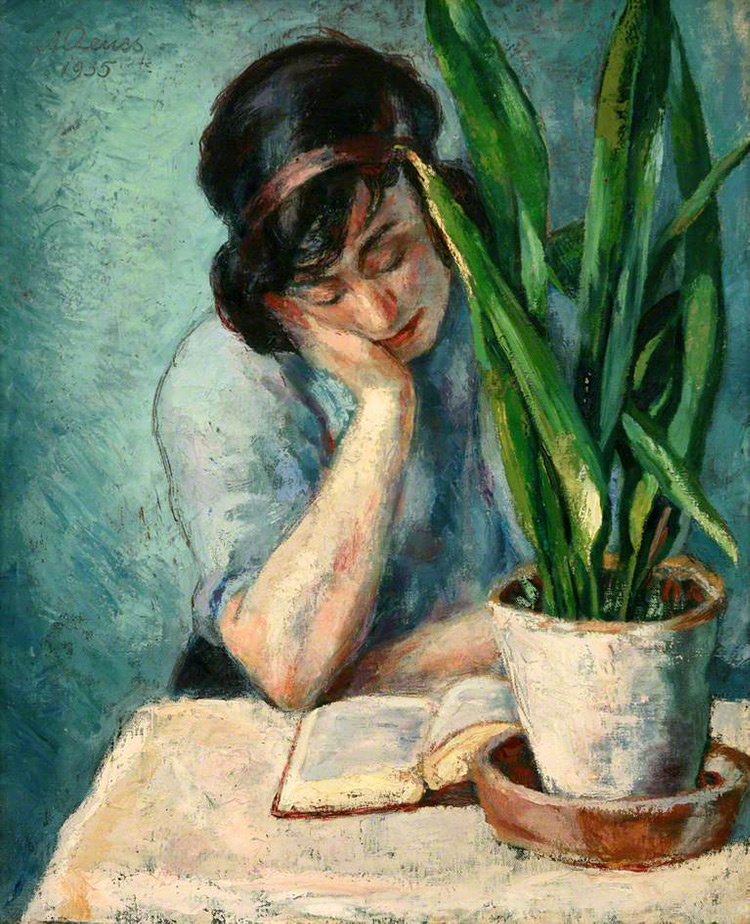 These figures, lost in their own thoughts, are echoed by the neighbouring portrait of Reuss’s wife, Rosa (née Feinstein). Titled Woman Reading with Mother-in-Law’s Tongue (1935), the painting shows a young, dark-haired woman sitting at a table, engrossed in a book. In the foreground, a pot plant injects a splash of green, offsetting the dominant cold blue hues. This portrait is typical of Reuss’s Vienna period, although the palette is more restrained and the technique more controlled than the previous example. Reuss made many paintings of Rosa, whom he met in 1915. She gave him the love and acceptance that his parents were unable to provide, supporting his artistic ambitions when no one else believed in him. At the time this picture was produced, he was becoming increasingly recognised in Viennese artistic circles.

But by 1938, as German troops marched into Austria, it had become painfully apparent that staying in his home country was no longer an option for Reuss. Packing up all of his and Rosa’s possessions, including artworks, he moved them into storage only to have everything confiscated by the Nazis. The couple escaped from Vienna to England with the assistance of the Cornishman John Sturge Stephens, a Quaker and pacifist who helped many Austrian Jewish refugees escape Nazi persecution. Stephens offered them a temporary home at his cottage in St Mawes. Penniless, exhausted and approaching their 50s, they set about building a new life in Cornwall. 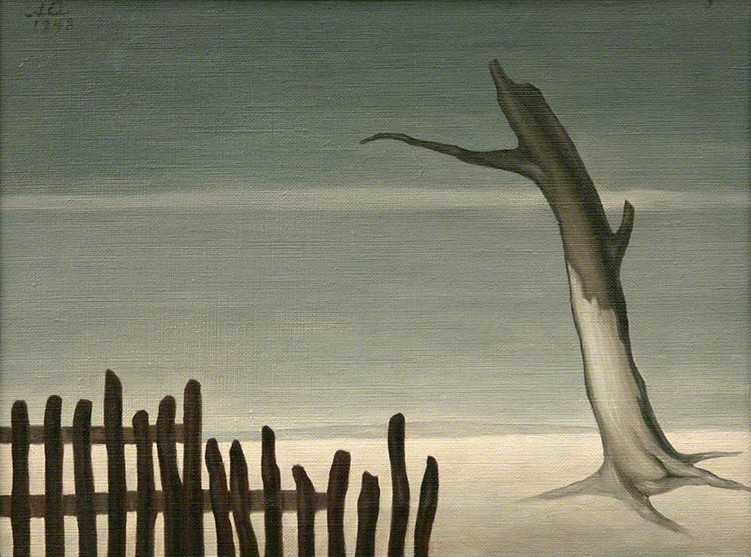 Moving into the following decade, the exhibition continues with Reuss’s postwar paintings. Gone are the colourful, heavily worked surfaces, exchanged for muted colour schemes and diaphanous layers of paint. Fence and Tree (1948) is a particularly bleak image, painted soon after Reuss moved to the coastal village of Mousehole in west Cornwall. On an empty, overcast beach, a solitary tree stands near a weatherbeaten fence. While the tree, dead and stripped of bark, alludes to death, the broken-down fence speaks to crumbling borders that no longer offer protection. These motifs appear repeatedly in Reuss’s Cornish works; their surrealist undertones evoke Salvador Dalí and Giorgio de Chirico, but also the Western Front images that Paul Nash painted during the first world war. As with Nash’s paintings of desolation, Reuss’s trees can be understood to represent human beings. In later works, such as Fence with Stripped Tree Trunks (1971), the trees are felled; their twisted, lifeless forms lying like corpses on a barren shore. 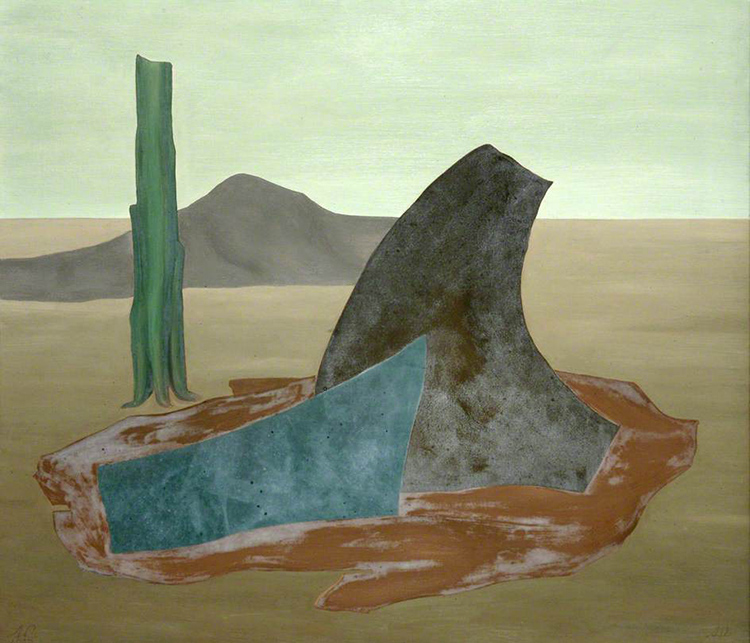 Dripping with melancholy, many of Reuss’s paintings seem to express deep trauma. Despite living on a beautiful stretch of Cornish coastline with spectacular views, Reuss never painted the local scenery. Instead, his doleful landscapes are inventions of the mind: interior, psychological spaces manifested in paint. The beaches he painted are often littered with abandoned objects, such as pieces of corrugated iron and other unidentified objects that appear to have been dumped, or perhaps washed up with the tide. Several strange forms are seen in Green Tree Trunk and Shark Fin Shapes (c1963), which suggest menace and threat. In one instance, a human form appears on the beach. Painted with thick oil paint, Figure and Tree Stump (1967) is a strange self-portrait that depicts Reuss slumped on the rocks as if dead – part of the flotsam washed ashore in a foreign land. The picture provides a disturbing insight into Reuss’s state of mind, reeking of isolation, abandonment and sadness.

The mourning continues in Woman Seated Among Sculptured Forms (1970), a posthumous portrait of Rosa painted in the year of her death. She sits alone amid a cluster of ambiguous forms that, although appearing like cloth, stand erect like metal or stone. Her sombre, grey-skinned countenance contrasts with the vitality of her younger self seen previously. Even sadder is the final work, which reveals Reuss’s enduring anxieties about the Nazis. Despite having escaped Hitler’s clutches 30 years earlier, he became increasingly fearful towards the end of his life, worried that he might still be caught. This apprehension is felt in Interior II (Stones and Wood, 1971 or 1972), which shows a room that has been violently broken into. A broken fence lies on the ground alongside a discarded canvas, perhaps referencing the Nazi looting of Reuss’s last days in Vienna.

Though he found escape, shelter and a new life, Reuss never really recovered from the events of the 30s and 40s, or from the knowledge of the atrocities visited on those unable to flee. But, then, how does one move on from such evil? Reuss is a pertinent choice to help us reflect on the horrors of history. His work deserves to be much more widely known.