Can art create a country? Two concurrent exhibitions in Paris showcase the artists who forged Finland’s identity against Russian dominance 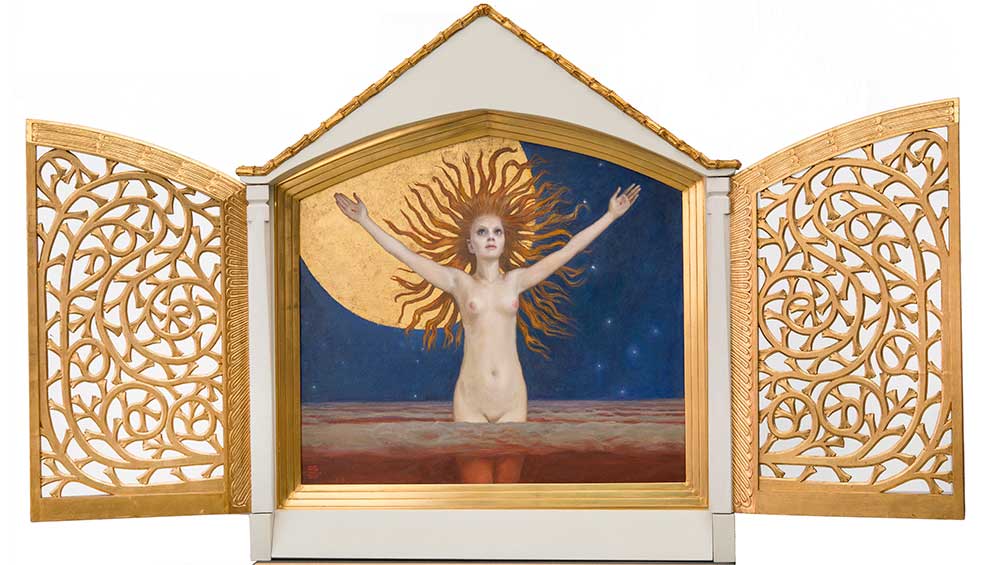 Few countries have such a stable sense of self as Finland, with its distinctive Uralic language, egalitarian traditions and snow-capped landscapes. Yet its history as an independent nation has been relatively short. For almost 700 years it was divided into a series of Swedish provinces. Except for a single conspiracy in 1788, little happened to suggest a population yearning for self-determination. As is the case in much of Europe, it was the Napoleonic Wars that changed everything. A proxy conflict ended with it handed over wholesale to the Russian Empire in 1809.

The newly created Grand Duchy of Finland was both the first distinctive political entity called Finland and a subject of the Tsar. The period that followed saw a remarkable flourishing of Finnish national awareness, which used clever political manipulations and calls to local folk culture to strengthen the case for an independent Finland – even as Russia tightened the screws. The gauntlet was thrown down in 1835, when a rural doctor, Elias Lönnrot, published the Kalevala, an epic poem based on folk tales from the eastern region, Karelia. The Kalevala’s influence spread across Finnish culture to an extraordinary extent, from the national Romantic architecture of Eliel Saarinen to the sublime symphonies and tone poems of Jean Sibelius. 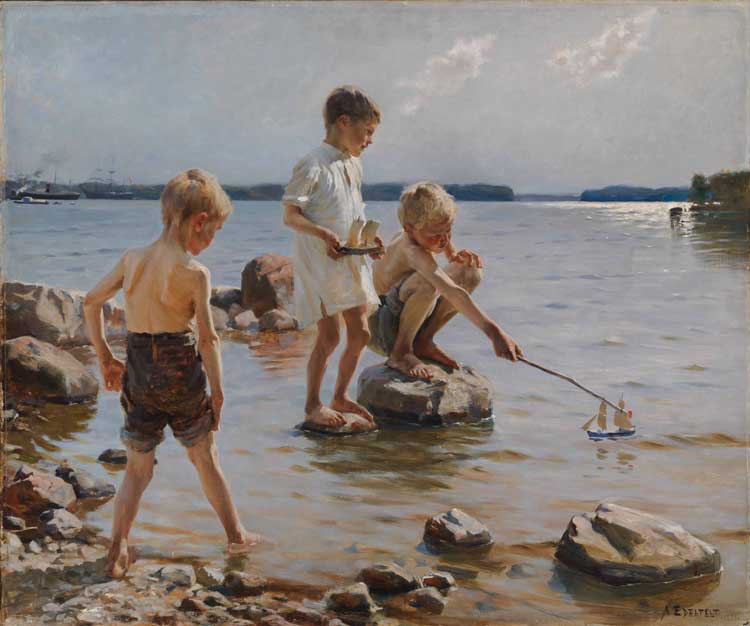 The painters who brandished their brushes in creating this nascent nation have arguably lacked the international profile of their literary, musical and architectural brethren. But now, a pair of exhibitions in Paris provides a rare chance for those outside Finland to meet two of the most prominent. Albert Edelfelt (1854-1905), whose Boys Playing on the Shore (1884) was voted as Finland’s most significant single painting in 2013, is the subject of a weighty retrospective, Lumières de Finlande, at the Petit Palais. Just 10 minutes away, at the Musée Jacquemart-André, his younger contemporary, Akseli Gallen-Kallela (1865-1931), is under the spotlight in Mythes et Nature. 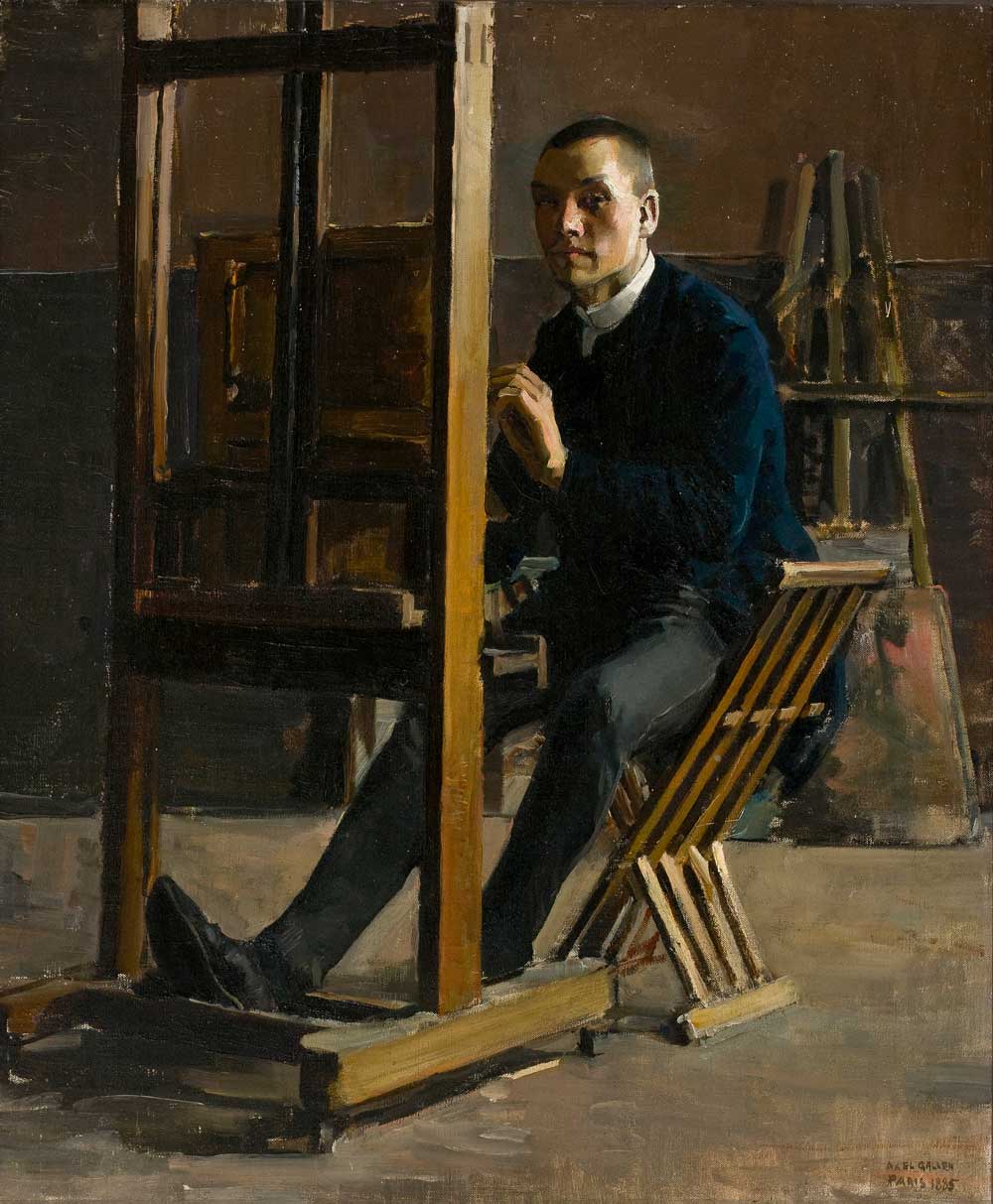 There are many parallels between the pair, who became fast friends. Both came from small towns and from Swedish-speaking families (Gallen-Kallela was born Axel Waldemar Gallén, changing his name in 1907). Both trained in Paris – Edelfelt at the École Nationale des Beaux-Arts and Gallen-Kallela at the Académie Julian – and became widely travelled. And both did more than any politician to put Finland on the map, through work that depicted the people and places of their country and pan-European lifestyles that introduced their work to non-local audiences.

Of the two, it is Gallen-Kallela who has become the emblematic national figure – and not only because he lived to fight in the Finnish civil war that ended with the country’s independence. He was strikingly handsome and well-built: the best-known photograph of him shows him posed with ski poles and looking into the distance, as if sizing up the mountain ahead. And his art has a sense of mythic significance. His landscapes, among his finest achievements, capture the sublimity of Finland’s snowdrifts and lakes like no other. 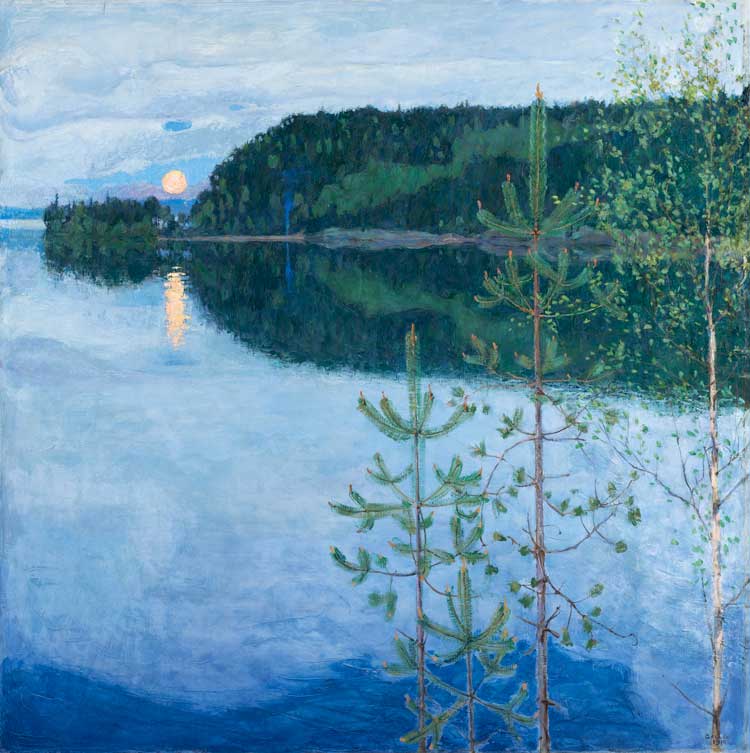 He began as a naturalist, painting scenes from life. But even in his early work, his characters seem less like individuals and more like archetypes. The villagers in Rustic Life (1887) could be medieval peasants, while the sick man in Wound Fever (1889) gazes out from his bed with puppy-dog eyes, as if charming you into helping him. Gallen-Kallela married in 1890, and he and his wife, Mary, travelled to East Karelia for their honeymoon. Here, he began to fall for the romantic tales of the Kalevala and changed his style accordingly. The Aino Myth, Triptych (1891) here is the banner example. Presented in a gold-hued frame carved with swastikas (which the Jacquemart-André keenly notes as symbol of the sun and the hammer of Thor), it depicts the tragic tale of the suicidal Aino in a sort of stiff Romanticism. If this were Gallen-Kallela’s peak, he would have remained a painter of provincial interest. 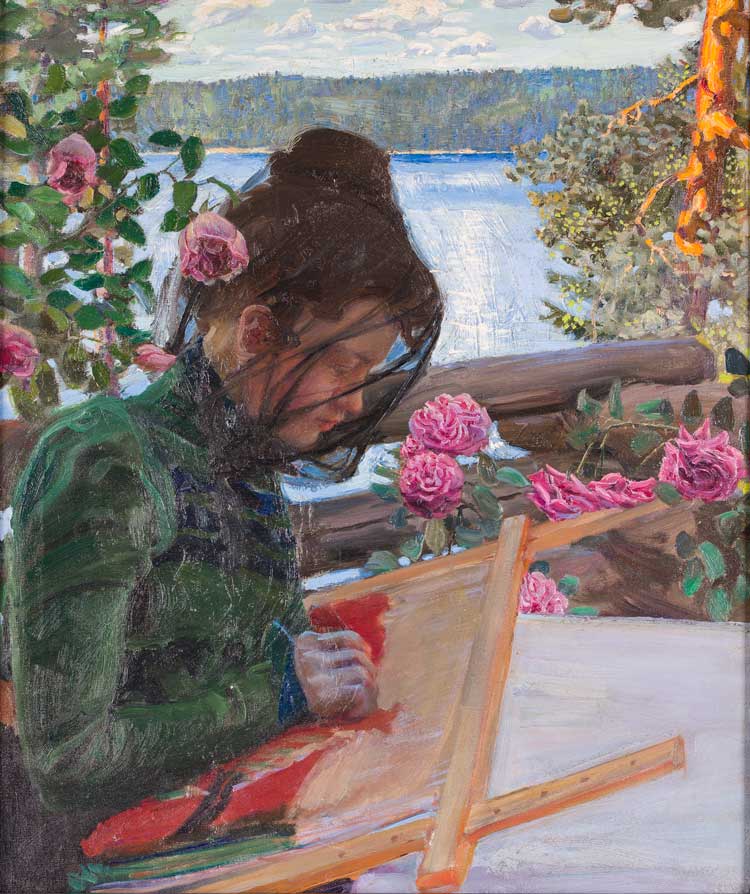 Yet over the next few years, everything changed. His art seemed to leap from the late 19th century to the 20th almost overnight, perhaps influenced by overseeing a joint Berlin exhibition with Edvard Munch. Gallen-Kallela’s style became bolder. At times, he leapt into symbolism. Ad Astra (1894) must be seen to be believed. It depicts mankind’s resurrection as a fey nude ascending above the stars, her hands raised in adulation. It comes in a special golden case, as if the painting were not enough. His 1890s works from the Kalevala, meanwhile, exhibit thick black lines and a graphic aesthetic, perhaps inspired by the same Japanese prints that galvanised Vincent van Gogh. Fantastically dramatic, they seem to belong as much to the world of comic books and metal album covers as fin-de-siècle fine art. 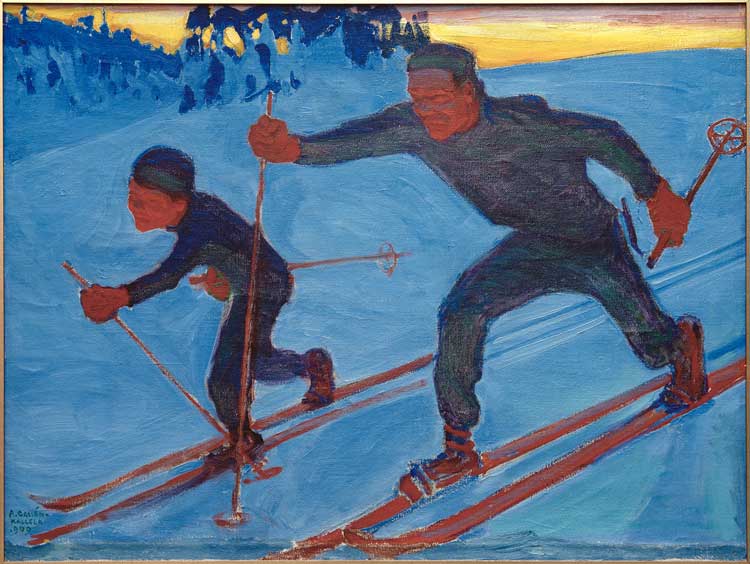 In 1900, Gallen-Kallela collaborated with Saarinen on the Finnish Pavilion at the Paris World’s Fair, designing textiles and furniture as well as paintings. It was a hit, and it thrust both artist and nation into international consciousness. One of the textiles, displayed at the Jacquemart, demonstrated an abstract flame pattern that contains seeds of the warm, minimal aesthetic Nordic design that would later come to favour. Afterwards, Gallen-Kallela was made a Legion of Honour, invited to exhibit in Munich by Wassily Kandinsky and spent four years exhibiting at the Vienna Secession. He dabbled in fauvism: the brilliant Skiers (1909) has a red-faced father and son charging through the placid snow, becoming its masters.

Against Gallen-Kallela’s exuberance, Edelfelt comes across as muted. A devotee of plein air painting, he stuck to the same realist style throughout his career. When he was struck down by heart failure, aged 51, he was on the way to being a relic. But Edelfelt has his own distinctive qualities. He achieved his fame chiefly as a portraitist. His portraits are masterclasses in restraint, rendering his subjects as believable, living beings representing only themselves. An 1885 depiction of his friend Louis Pasteur shows the medical pioneer inspecting a sample in his lab, a quieter sort of heroism than those in Gallen-Kallela’s works. 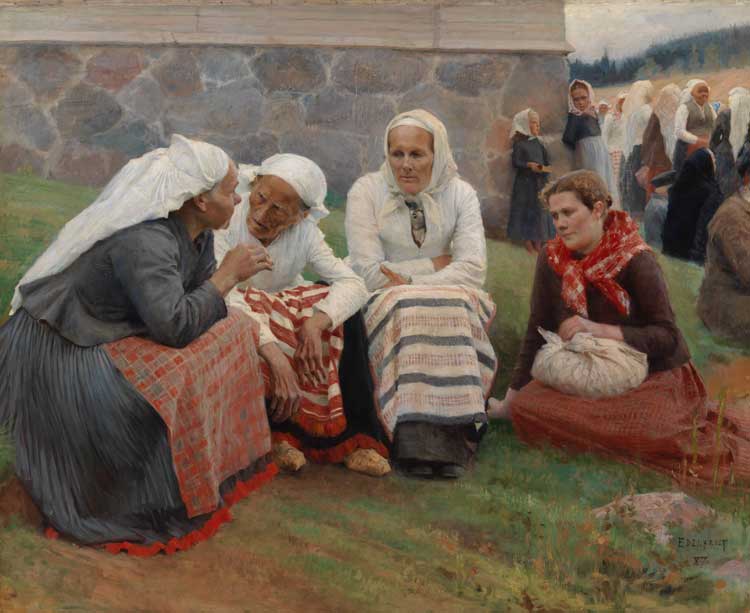 When it comes to Finland, Edelfelt depicted the land as it is rather than as it ought to be. Outside the Church at Ruokolahti (1887) shows four country women sitting down to a conversation. Their facial expressions are observed with a striking verisimilitude, accurately capturing several of their different approaches to the act of listening. His landscapes have a similar fixation on capturing moments-as-lived. Kaukola Ridge at Sunset (1889-90) depicts a lake from above, at the precise moment when the sun falls down the horizon with a final golden glow. A gnarled tree trunk sits in the foreground. While Gallen-Kallela’s Finland appears a frosty paradise, Edelfelt finds beauty in the here and now. 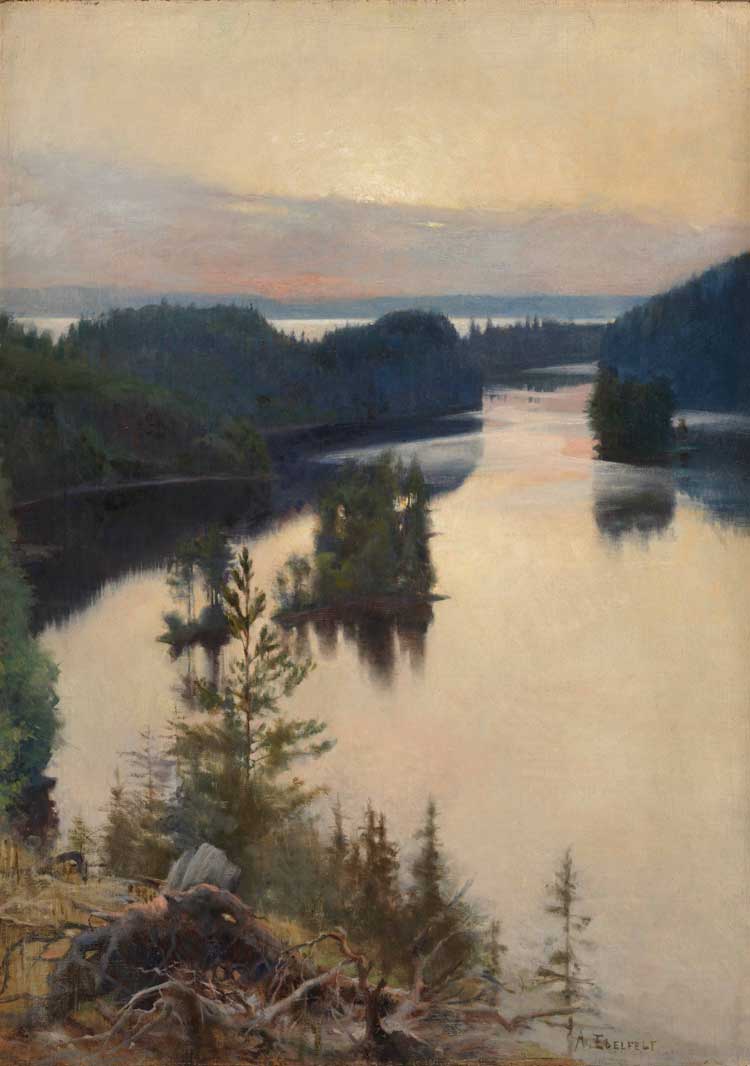 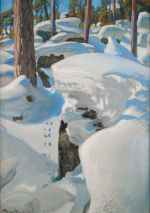 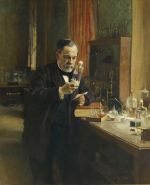