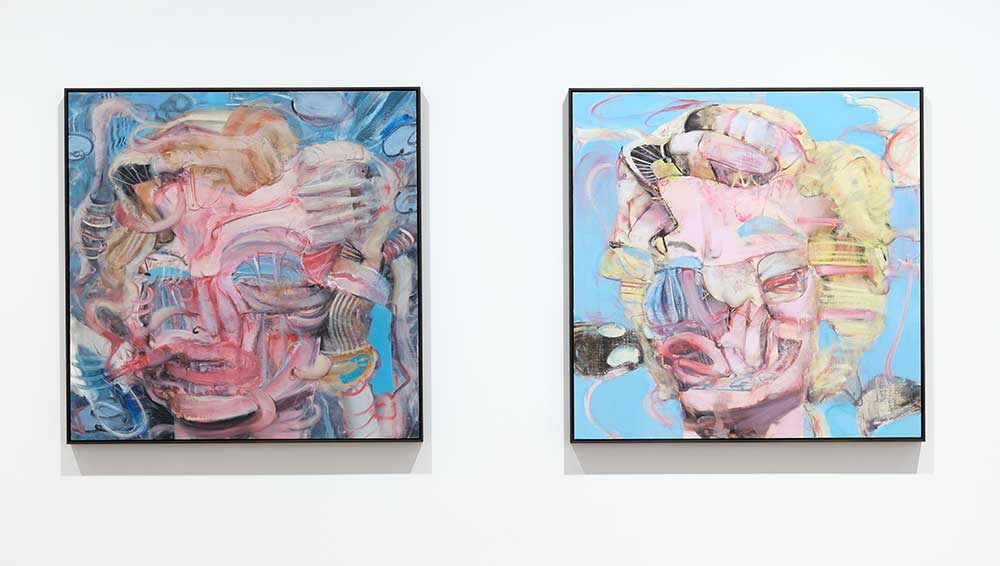 The Romanian artist Adrian Ghenie (b1977, Baia Mare) specialises in half-remembered trauma history. His paintings often centre on figures from the tyrannical regimes of 20th-century Europe, particularly those from his native land, extrapolated from photographs and film scenes. In his most famous series, Pie Fight (2008-12), these figures are concealed and disfigured by sticky drips of custard, a ritual humiliation drawn from classic slapstick acts like The Three Stooges. Comedy gatecrashes tragedy. Dictators lose their power over us when covered in slop, victims of the sort of humiliating rituals they impose on their subjects. Ghenie might go down in history as the painter who pied Hitler. Other works reach back into art history: The Sunflowers in 1937 (2014) imagines Van Gogh’s famous still life as if being burned by the Nazis as “degenerate”.

Despite the visceral nature of this world, Ghenie has become something of an art-market darling. Collectors await his new work with bated breath. Many pieces are sold before they hang on the wall. The flippers of the secondary market have made small fortunes out of him. This May, his painting Degenerate Art (2016) sold for almost US$9.3m (£8m) at Sotheby’s New York. A few days later, at Christie’s Hong Kong, Pie Fight Interior 12 (2014) went for just under US$10.4m (£9m). One might wonder what draws the oligarchic elite to paintings critiquing the sort of authoritarian figures many of them serve. Ghenie, for his part, has used his success to buoy the artists of his home country: in 2005, he co-founded Galeria Plan B in Cluj-Napoca, which serves as an incubator for young Romanian artists and a promoter of the works of those previously ignored. 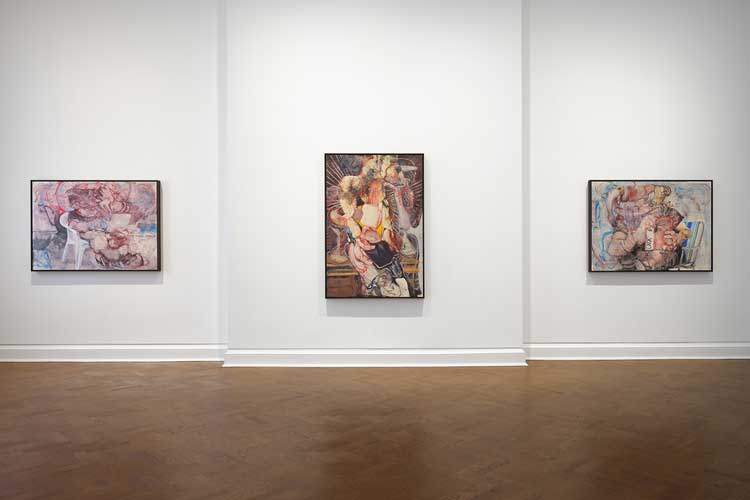 Seemingly unperturbed by any need to appeal to the market, Ghenie has continued to pursue knottier subjects. His paintings have become more disorderly, chaotic and complex. He has delved deeper into the history of the genre, while at the same time bringing in more elements of the contemporary. Earlier this year, he installed two altarpieces in Palermo’s Chiesa della Madonna della Mazza, inspired by Renaissance and baroque painting. The Crucifixion (2019) has two figures bound to the cross with rope. One wears a bright orange US prison jumpsuit, the other Adidas trackies. The trauma of the past has bled over into the present.

In The Fear of NOW, Ghenie’s new exhibition at Thaddaeus Ropac London, he trains his eye on our present moment. It comprises 20 new paintings and nine charcoal drawings. The majority of these works belong to a loose series exploring the contemporary obsession with digitally connected devices. It is an indictment of our time that a painter so concerned with the darkest chapters of human history has turned to it. Ghenie depicts tangled, twisted figures transfixed by their phones, laptops and tablets. Often bound to chairs, they bend down to face the illusory digital world, in an inversion of the heavenward gazes of Italian baroque saints. 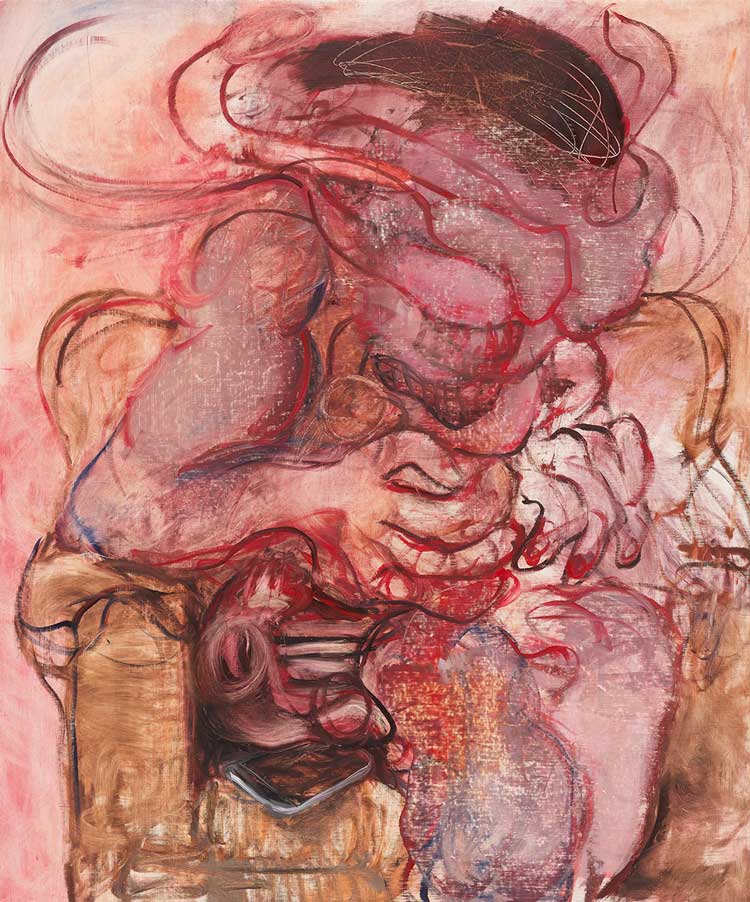 Ghenie captures how the screen has contorted our body language, then takes things further. These figures are extraordinarily monstrous. Some of them are all globular flesh, somewhere between late Philip Guston and early David Cronenberg. Many are connected to their devices by sinister tentacles; one, in Impossible Body 2 (2022), seems to be stuck to his laptop by his tongue. The figures in the Impossible Body miniseries (all 2022) look as if they are about to evolve into a new, even more horrifying form of life. The Studio Scenes works (all 2022) are brutal self-portraits. Studio Scene 2 (2022) sees Ghenie transformed into a being of concertina-like tubes, liable to fall apart at any moment as his mind whirls through the endless online content. One of the few that features more than one figure, The App (2022), sees two of these creatures pore over a phone while sticky, spit-like strands of blue matter join them together, similar to those reaching out from laptops. 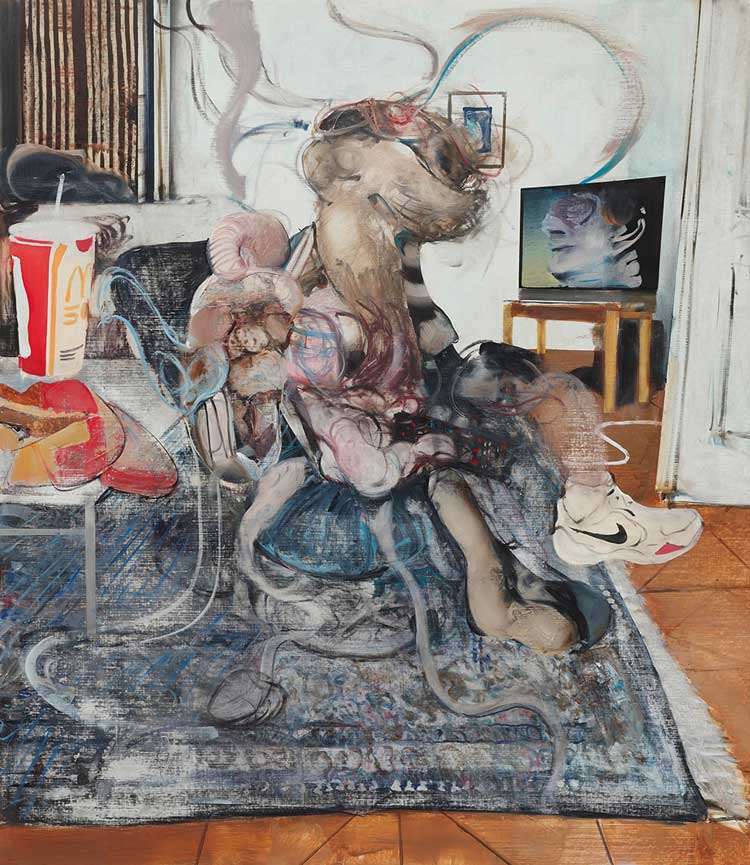 The paintings are strewn with the branded debris of contemporary life, all Nike trainers and Adidas shorts. Figure with Remote Control (2022) has a grinning face somewhere between a Looney Tunes character and an erect member, and a body equally bulbous and sinuous. One of his feet is clad in a white Nike sneaker, while the debris of a McDonalds meal moulders on the table next to him. These branded objects, often painted with a clarity and solidity absent from the whirling masses that surround them, seem to serve as moorings to the physical world.

In the past, Ghenie frequently used stencils and palette knives instead of brushes. His earlier paintings were characterised by thick swathes of paint and built-on impasto, the sort of layered, popping-out work that we expect from the great modern painter. His new pieces are built differently. Ghenie has embraced charcoal. He uses it like chalk on a blackboard, building and erasing as seems fit, while simultaneously translating the image into oil on a separate canvas. As a result, his artistic process has dramatically sped up. His images have become physically flatter while retaining the appearance of texture and layering: an apt transition for the new screen age. 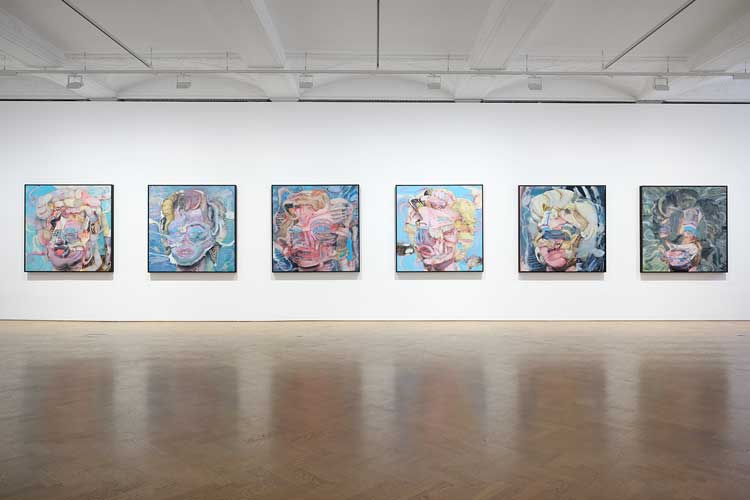 The other series on display serves as something of a showcase for this new mode. In a set of six Untitled (all 2022) oil paintings, Ghenie takes the head of Marilyn Monroe, as immortalised by Andy Warhol’s screenprints, and subjects it to a series of grotesque metamorphoses. Untitled 1 has a sickly pallor and ghastly, blue-framed eyes, as if rotting. Untitled 2’s forehead is smudged into fat, finger-like blobs, while Untitled 6 is all mushed play-dough. According to the gallery, these works are intended to “move beyond the superficiality of [Monroe’s] public image”. But, for me, their intrigue comes less from engaging with Monroe herself than with Warhol’s artwork, a banner work for the idea of mechanical production. Ghenie turns this over-duplicated image into a site for differentiation and creation. There is still something new in painting.