Adapt to Survive: Notes from the Future

Adapt to Survive: Notes from the Future 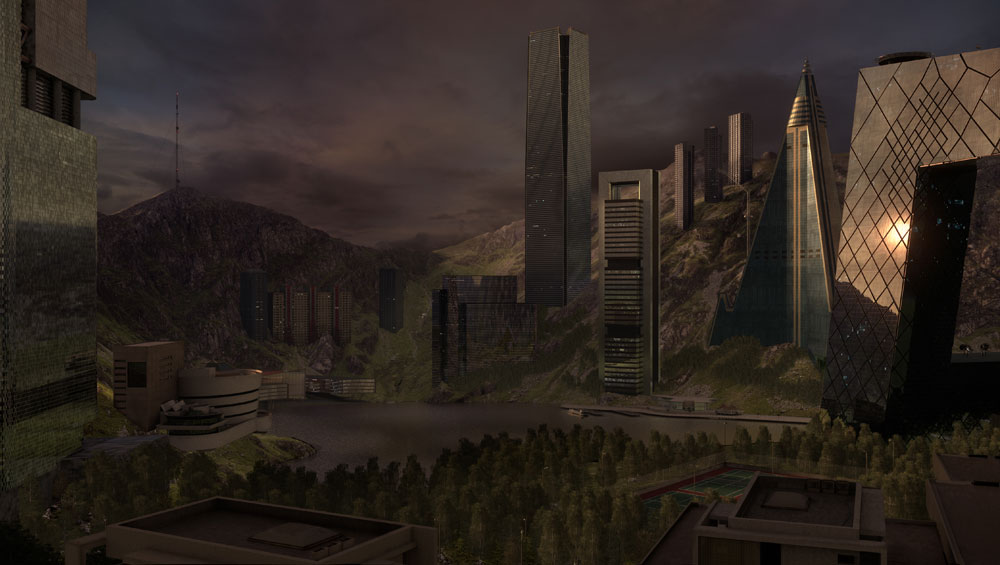 The Hayward Gallery’s group show Adapt to Survive: Notes from the Future demonstrates that futures, like utopias, are always in some sense exclusionary. Take Thomas More’s island of Utopia, for example, where an underclass of slaves toil non-stop so Utopians can work for just six hours a day, and relax and read books for the rest of the time. Then there is Bedwyr Williams’ video Tyrrau Mawr (2016). Named after one of the lower summits of Cadair Idris in rural northern Wales, Williams’ video pictures a CAD (computer-aided design) global megacity built around a lake in the mountain’s foothills. The weather and time of day gradually change, but the view over the city’s grand, gleaming architecture remains fixed for the film’s 20 minutes. Tyrrau Mawr is made up of the tallest, most showy buildings from real-world cities; you might spot the pyramidal Ryugyong Hotel from Pyongyang, North Korea; the arch of the CCTV headquarters in Beijing; or Hong Kong’s monolithic International Commerce Centre. But behind the twinkle of steel and glass, like More’s Utopia, Tyrrau Mawr hides deep social inequality.

Overdubbed with an ironically uplifting orchestral soundtrack, a narrator offers stories of citizens’ everyday lives: looking across the marina, one inhabitant can’t help but feel excluded; “Nothing like a charity boat race to make you feel like an outsider”; while a concierge looks up in disdain at the lavish parties on the fifth floor to which he will never be invited. 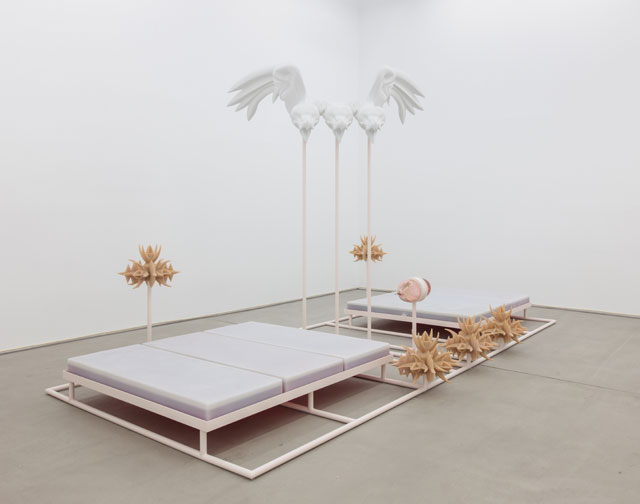 As Williams reveals the unassailable social boundaries built into city architecture, Marguerite Humeau’s large-scale sculpture HARRY II (BODY) (2017) looks at conflict borders by drawing on the mythological figure of the sphinx, a half-human, half-animal gatekeeper. In the middle of the frame around which the installation is built, a three-headed bird, hoisted high up on totem poles, squawks aggressively and flaps its imposing wings, warding off unwanted visitors. Like the sharp talons of predatory birds, there are five viciously spiky anti-fence-scaling devices known as raptors. Inside this threatening parameter, six pink plastic tanks filled with artificial blood call to mind the emergency hospitals erected in war zones. Their whitish surface looks bleached, as if repeatedly sanitised; it suggests recurrent bloodshed and provides a reminder of the many wars that punctuate history and unfortunately will likely continue to occur in the future.

Rainer Ganahl’s subversive short film entitled I Hate Karl Marx (2010) also examines geopolitical instability. The film is located in Berlin in 2045, and Ganahl reconceives Marx as the architect behind China’s political and economic ascendency. Set in a square in the German capital, the film focuses on a woman angrily yelling in Mandarin at a statue of Marx. She berates the philosopher for the growth of Chinese manufacturers, inverting a world dominated by the spread of US globalisation, and revealing the double standards of western xenophobia. 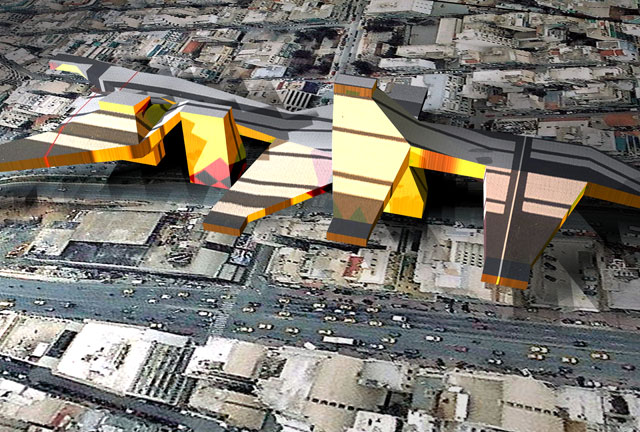 While Ganahl’s work responds to fears surrounding Chinese expansionism, Andreas Angelidakis’ video entitled The Walking Building (2004-06) addresses the increasing importance of digital technology. The film opens with black-and-white archive footage of an industrial building, which subtitles tell viewers is “the groundbreaking Fix factory […] built in Athens in 1960, a hyper-building in a city just starting to become animated by highways […] and […] production lines”. As the years passed, it seems the factory fell into disrepair but, we are told, it is now to be transformed into a contemporary art gallery. However, we are instructed that although museums in the 1970s preferred industrial spaces to mimic young artists’ studios and lofts: “Young artists today don’t need such a museum. Their studio is a computer. […] Their material is […] data flying through wireless networks.” Museums, it is asserted, should transition from physical to virtual spaces. The film cuts to a satellite image of Athens. A digital model of the factory then begins to break up into multicoloured blocks. They zip around the city like cars on a motorway or data through cables, then form a pulsating network, moving across Athens – a nomadic gallery animating and animated by the city and technology, like the Fix factory before it.

Ganahl and Angelidakis emphasise that future survival will demand that humans adjust to changing circumstances rather than simply adapt the environment to maintain their current mode of living. Comprising a text presented via a two-channel video and a set of vinyl drawings pasted around the gallery foyer and exhibition space, Youmna Chlala’s The Butterfly Already Exists in the Caterpillar (2018) provides a vision of what the world might look like in the decades to come if we don’t address climate change and move from fossil fuels to renewable energy. Set in 2077 in the Norwegian peninsular city of Fornebu, seasons no longer exist and sea levels have risen dramatically. The text projected on to the gallery’s walls describes citizens’ struggle to survive: “We work in the dry section, under an ever-changing sky […] Everything disintegrates, is eaten by insects, rusts, warps, freezes, melts.” Chlala’s multicoloured drawings have a watercolour-like fluidity, suggesting a climate in constant flux. Razor-sharp flowers signal a hostile change in the biosphere, while towering architectural structures invoke desperate attempts to keep from drowning. 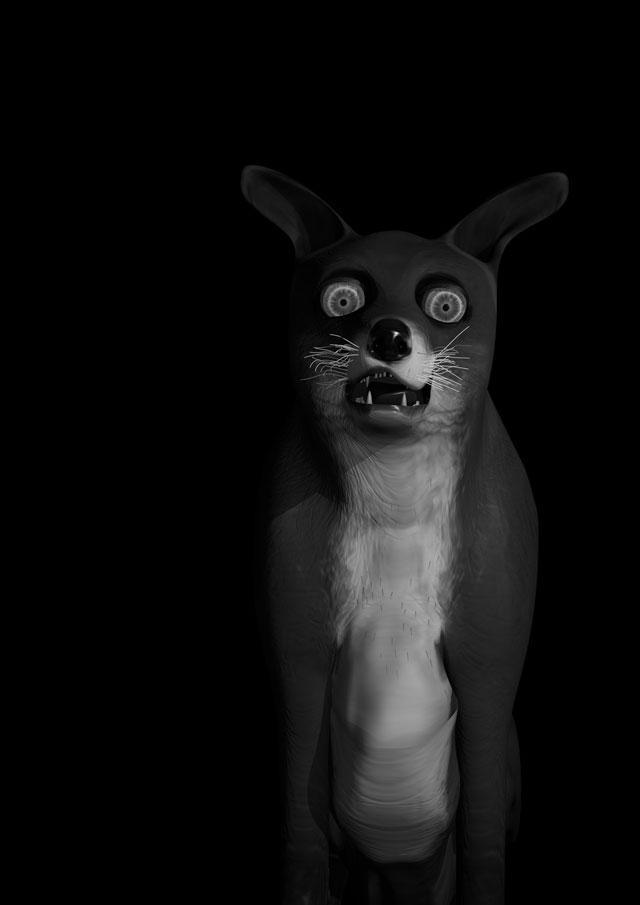 A notable difference emerges between the futures imagined by Angelidakis and Chlala; the former looks forward from the past, using history to anticipate future change. The latter looks back from the future, forecasting a future based on our present trajectory, offering “Notes from the Future”, to quote the exhibition subtitle. The nihilist outlook of Ann Lislegaard and Julian Charrière’s works, however, dispel the logic of both predictive models.

Charrière’s Metamorphism XLIX (2016) belongs to a sculptural series, which examines consumer technology and the minerals extracted in their production. A grey rock containing green pigment is displayed in a vitrine, like an asteroid you might find in a natural history museum. To make what he calls “samples”, Charrière poured molten rock over hard drives, central processing units and RAM from laptops and smartphones, then left the mix to cool and harden. According to Charrière, if you mined the stone, it would be possible to rebuild the devices and read their data. It is as if the work anticipates a far off future, thousands of years from now, when nothing remains of the current civilisation but fragments of computer buried in rocks that subsequent earthlings will study as we do fossils today. 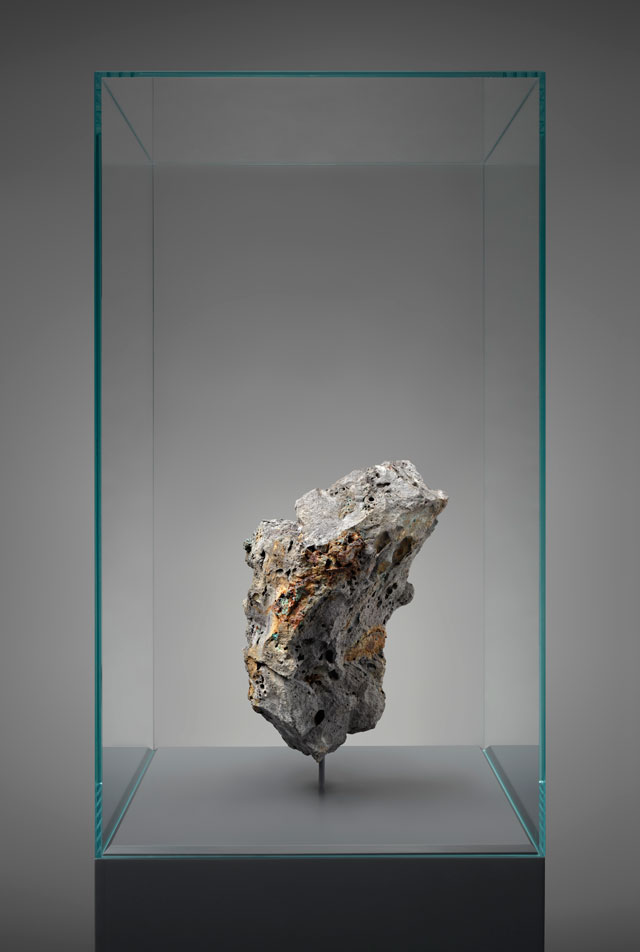 Whereas Charrière imagines a future with little of a past to look back on, Lislegaard’s 3D animation TimeMachine (2011) suggests it is futile even to try to draw meaning from the past or the future. An animation of a demented fox, reading from the 1895 novel of HG Wells from which the work takes its name, is projected into an unfolded, mirror-lined box, producing a holographic-like image. “Life and light faded away … blackness … blackness … I stared at the blackness creeping over the bay,” stutters and slurs the fox, hiccupping and swaying as if drunk. Its words are devoid of meaning, as empty in reality as the mirror-lined box. Lislegaard insists on the essential unknowability of the future – a black open expanse – but whatever it might hold, to make it to the future we must change now. 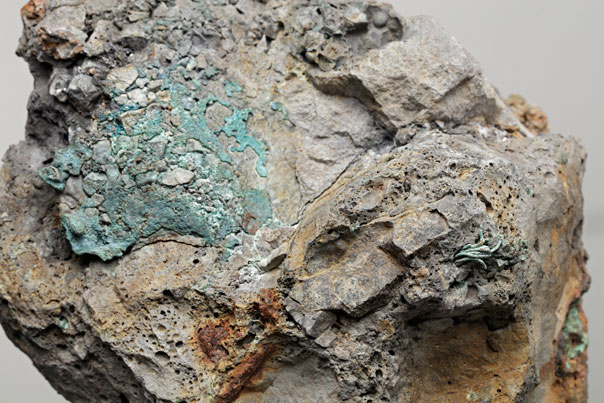