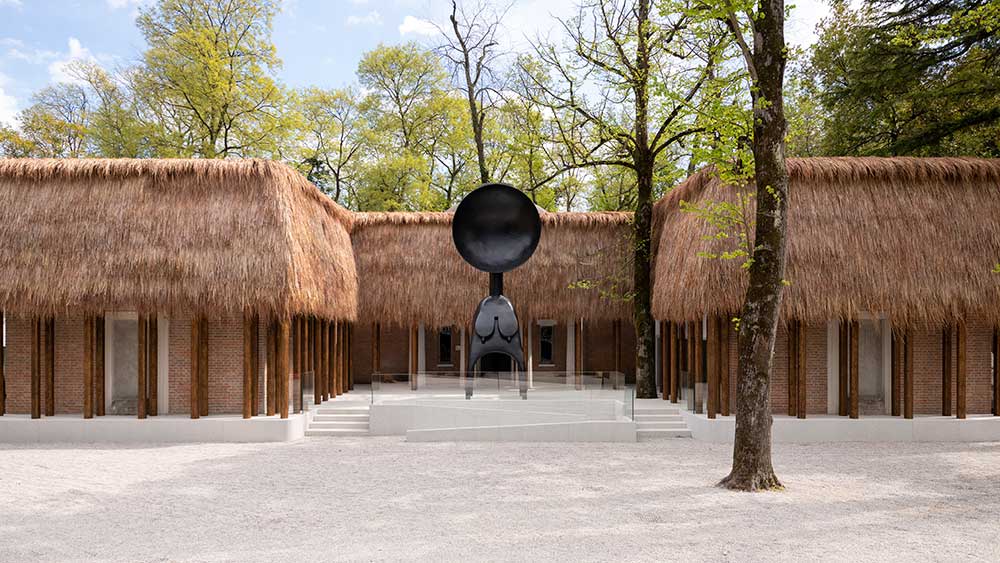 Each edition of the Venice Biennale has its distinctive tone, but one thing remains the same: Venice during an on-year is exhausting. The Arsenale and Giardini, home to the main exhibition (this year The Milk of Dreams, in which 213 artists are taking part)and the majority of national pavilions, each pavilion demanding a day to explore. But they are only the tip of the iceberg. For about six months, every space in the most serene city is stuffed with satellite exhibitions and concurrent shows, from monographic exhibitions of contemporary titans to showcases of emerging voices from across the world. It can be overwhelming, even for the seasoned attendee. If you find yourself lost in the campi, unsure which calli to turn down, set a course for one of these.

The UK’s Sonia Boyce took home this year’s Golden Lion for Best National Pavilion, for an installation centred around videos of five black female musicians. If I had headed the jury, the prize would have gone to the US. Simone Leigh’s Sovereignty announces itself with a complete redressing of the US pavilion as a West African vernacular house, complete with thatched roof and timber columns, in a nod to the habit of international exhibitions to co-opt and imitate vernacular structures from across the colonised world. 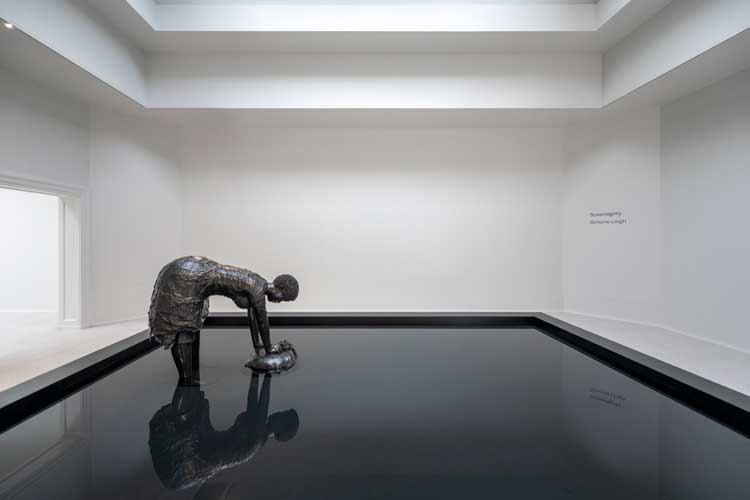 Inside, Leigh presents a powerful set of bronze and stoneware sculptures exploring black female identities, and a film depicting Leigh and her team at work in a frenzy of creativity that ends with the ceremonial burning of a statue. 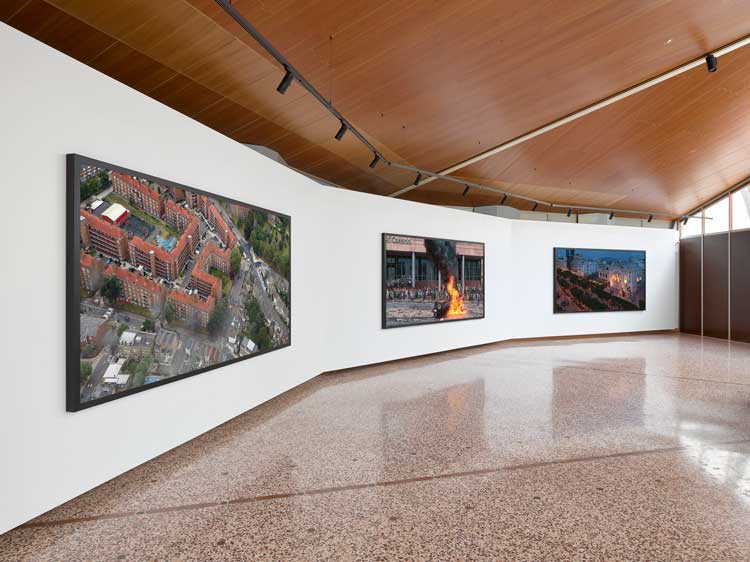 Over at the Canadian Pavilion, a new set of works by Stan Douglas connects the European revolutions of 1848 and the various unrests of 2011, year of the Arab spring and Occupy Wall Street. Building on his 2017 works depicting the 2011 London Riots, Douglas presents four huge composite images drawn from news footage of 2011’s uproars. So photorealistic that they appear unreal, his works capture the bubbling potency of social unrest. 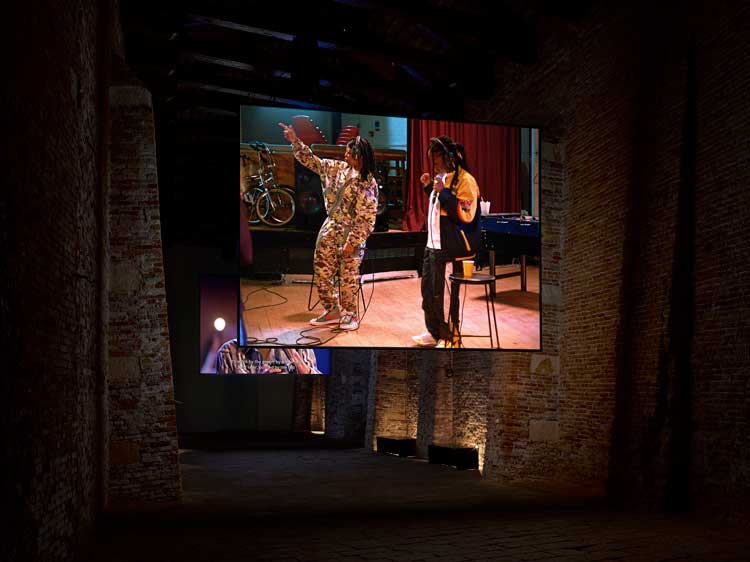 His exhibition continues at the Fondazione Emilio e Annabianca Vedova’s salt warehouse in Dorsoduro, where Douglas presents ISDN, a two-channel video that stages a rap-off between British grime and Egyptian mahraganat, two genres inspired by American hip-hop that emerged in the early 2010s. 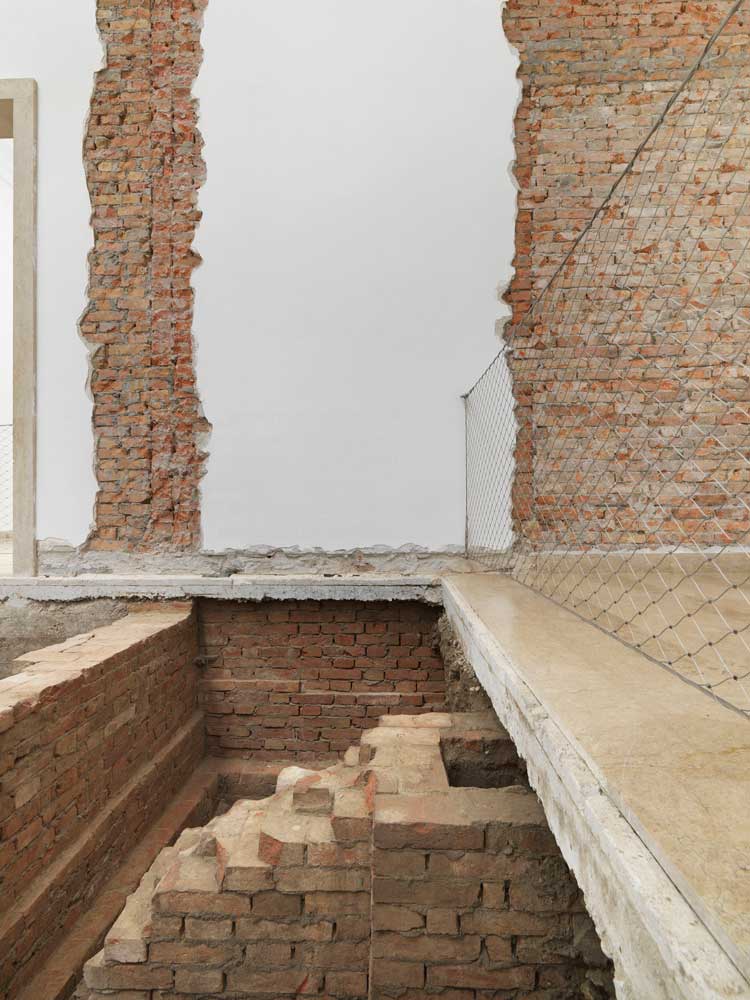 Those in search of quietude should seek out the German Pavilion, next door to Canada’s. A building whose present form dates to the 1930s, it has long been one of the most controversial exhibition spaces, the Haus der Kunst in miniature. In 1993, Hans Haacke smashed the building’s floors. This year, Maria Eichhorn has revealed the foundations and parts of the brick walls. Titled Relocating a Structure, her work asks us to look outside the pavilion itself. Eichhorn has also organised a series of walking tours looking at sites of fascist resistance in the city, and a website offering a detailed history of these places. In an event where the big and brash tend to push out the quietly well-researched, Eichhorn's pavilion offers something of a respite, even though there is not so much to see.

Some of the national exhibitions sit outside the main venues. Melanie Bonajo’s When the Body Says Yes, representing the Netherlands, fills the deconsecrated Chiesetta della Misericordia with cushions, curtains and softly hued footage of the barely clad. Bonajo’s diverse cast bump, grind and gyrate over a voiceover that discusses types of intimacy. Although explicit, the warmth with which Bonajo approaches her subject feels more sacred than profane.

Few works in Venice tackle the invasion of Ukraine. But the war does intrude. The Kazakhstan Pavilion at Spazio Arco might have been sunk when its participants, the Orta Collective, had several years of artwork stuck at the Georgian border. Their pieces, including video art, painting and embroidery, were inspired by the work of the Russian avant-garde artist Sergey Kalmykov. With days to go, the collective set about using cheap materials to make a makeshift staging post for their performances in time for the opening. It is now fully installed, and was worth the wait: an immersive blend of textile and technology. 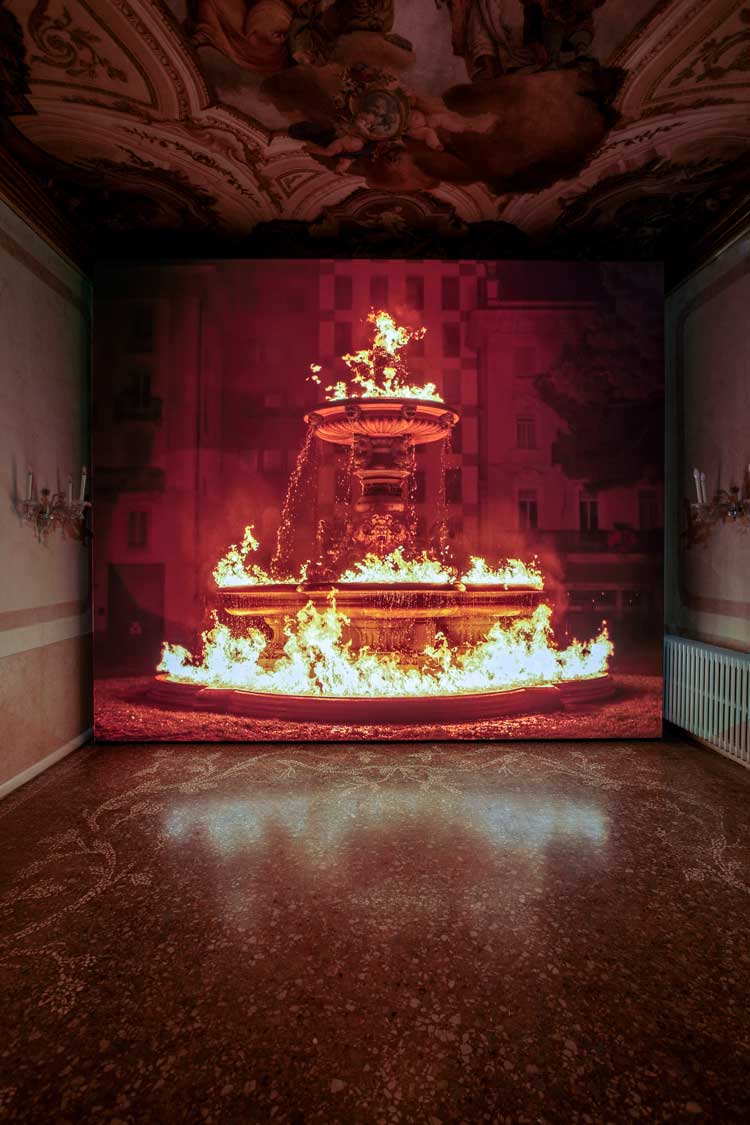 As ever, many of the most intriguing shows occur in the biennale’s collateral fringes. There is a welcome return for Parasol Unit, the not-for-profit gallery that shuttered its London base in 2020. The group show Uncombed, Unforeseen, Unconstrained, in the magnificent Conservatorio di Musica Benedetto Marcello, presents 11 contemporary artists concerned with entropy. One highlight is Julian Charrière’s mesmerising video installation And Beneath It All Flows Liquid Fire (2019), which shows flames overcome a historic fountain, an act of iconoclasm that seems particularly intense in this sinking city. 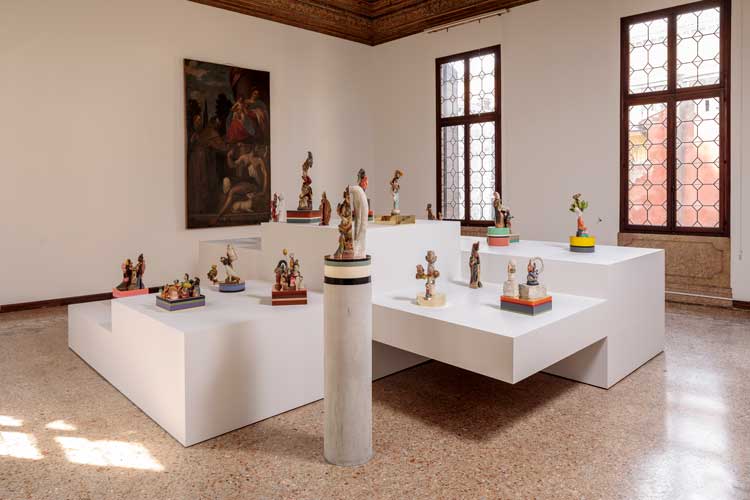 Another is Bharti Kher’s The Intermediaries (2017-), a group of hybridised sculptures made from fusing together the broken parts of South Indian clay objects. Oliver Beer’s Little Gods (Chamber Organ) (2022), meanwhile, is one of this year’s most whimsical pieces: a family of decorative objects arranged around an organ, which each light up when a note from the chromatic scale is played. 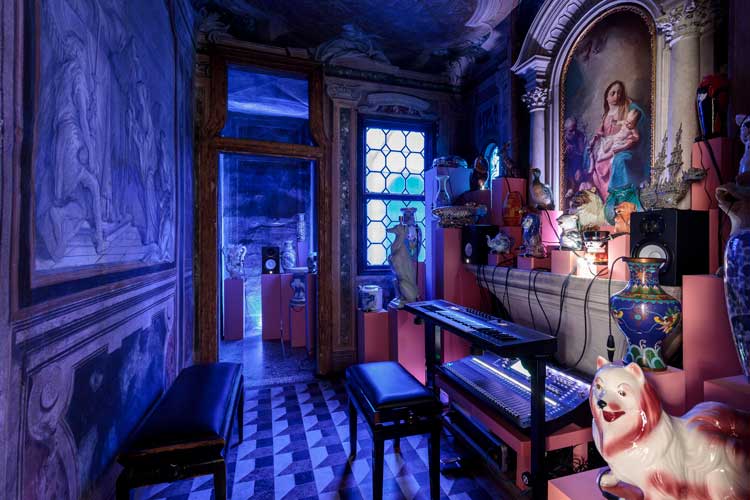 Those with a long afternoon to spare should head to the Complesso dell’Ospedaletto, where the Fondazione In Between Art Film presented Penumbra, an exhibition of eight new video installations loosely connected to the idea of the space in between darkness and life. 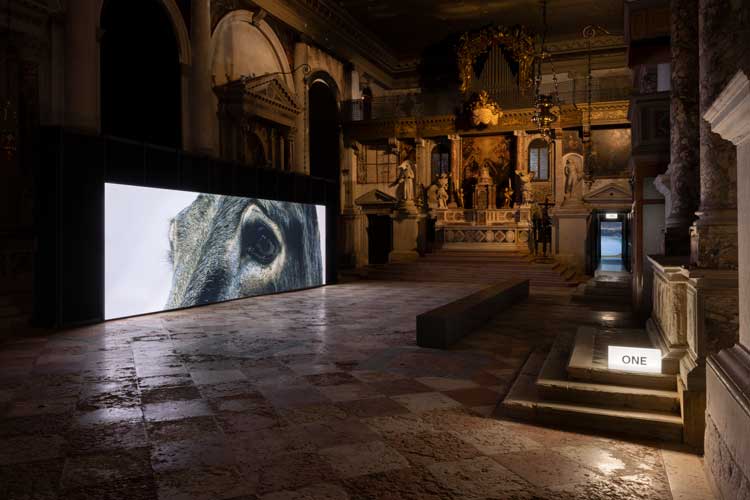 Masbedo’s Pantelleria (2022) starts with the story of the titular island’s bombardment by allied soldiers in 1943. Islanders claim that, in the aftermath, the allies blew up buildings for use in a propaganda film. The film investigates how this story has been transmitted through the years. Takbir (2022) by Aziz Hazara, filmed in Kabul in the aftermath of its fall to the Taliban, explores the notion that darkness can provide refuge.

One of the year’s strongest solo showings, which closed on 22 May after a short run, came from the British artist Fiona Banner. Pranayama Typhoon – named for the natural disaster and an ancient Indian breathing technique – took over a school basketball court within a converted church in the Castello alleys, snuggly between the Arsenale and Giardini. Its central work, the video Pranayama Organ, begins with two decoy fighter jets slowly inflating. Then we see two figures dressed up as these jets fighting on the beach, in a tangle that wraps up hi-tech violence with tender intimacy. 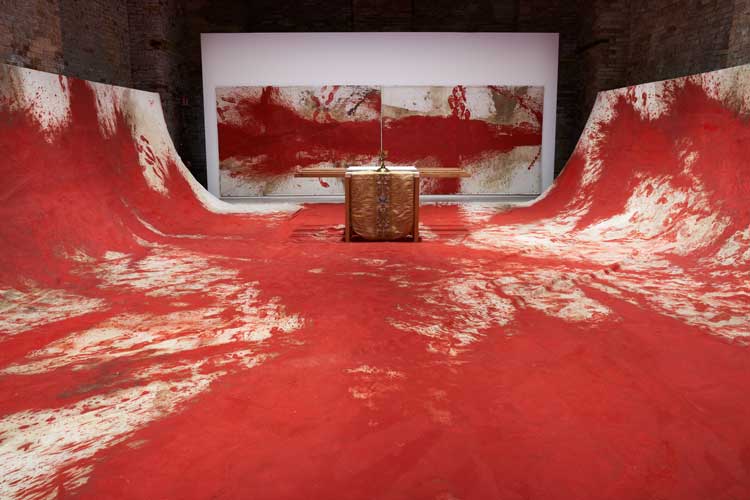 The Austrian artist Hermann Nitsch, one of the leaders of the controversial Viennese Actionists, died just days before the biennale opened. His exhibition at Fondamenta S Biagio now serves as a tribute. It comprises one huge work from 1987, the 20th Painting Action: a room splattered with red-coloured liquid. Nitsch often used blood in his work. In this case, however, he used red paint. Encountering it remains an overwhelming experience, as anxiety-inducing as it must have been when first executed at Vienna’s Secession.

Perhaps the greatest provocation of all this year, however, belongs to Pauline Curnier Jardin, the French artist who made a splash at the 2017 Biennale with her eerie, ritualistic videos. Her exhibition, organised with Norway’s Lofoten International Art Festival, comprises a set of murals and a film, permanently installed in an all-female prison on Giudecca. Jardin’s work is shut off from the public, left for only the prisoners to see. In an event where everything is for show, Jardin’s is radically hidden. It raises numerous questions about the correct place for art and its audience – something undercut by the decision to allow some preview guests appointment-only access. Even so, it remains a fascinating anomaly in both this biennale and the institution in general.