All things decay at France’s biggest biennial, an exploration of fragility and resilience that tends towards the spectacular 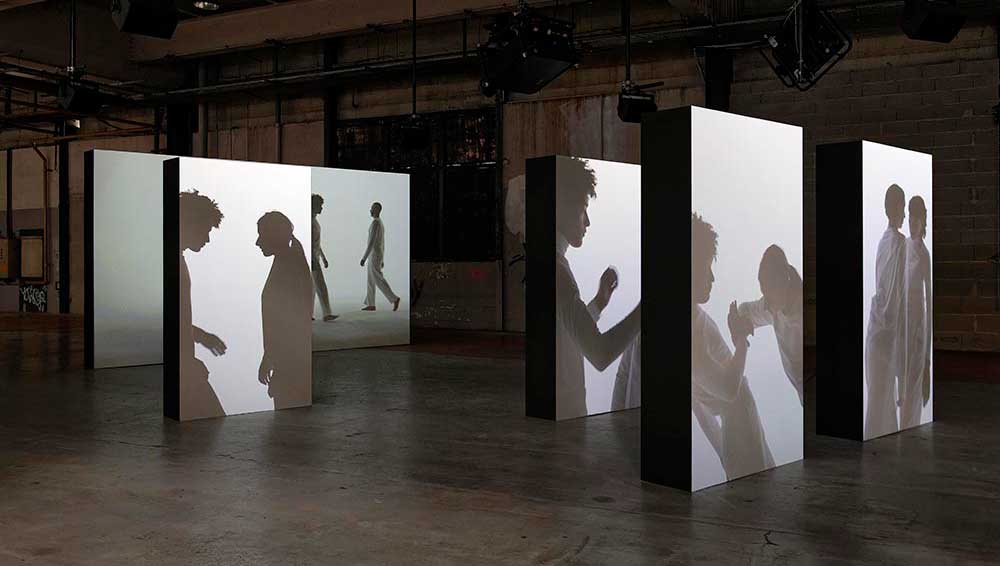 We live in a time of vulnerability. Much that seemed assured in the west is now under threat: democracy, economic stability, health, basic rights, the very planet we inhabit. Sam Bardaouil and Till Fellrath, the curators of the 16th Biennale de Lyon – France’s largest contemporary art exhibition – believe it is important that we acknowledge our own weakness. Their edition of the fair, titled Manifesto of Fragility, seeks to position “fragility at the heart of a generative form of resistance that is emboldened by the past, responsive to the present and primed for the future”. It does this through the works of 200 artists, from the living to the long dead.

The biennale has three strands or “layers”. Two of them inhabit the MacLYON, the city’s museum of contemporary art. The third, A World of Endless Promise, is by far the largest. It sprawls out across France’s beautiful, bustling eastern metropolis. In a year where some international exhibitions, most notably Documenta 15, have strived to do things a little differently, the Lyon Biennale harks back to those years before the pandemic. 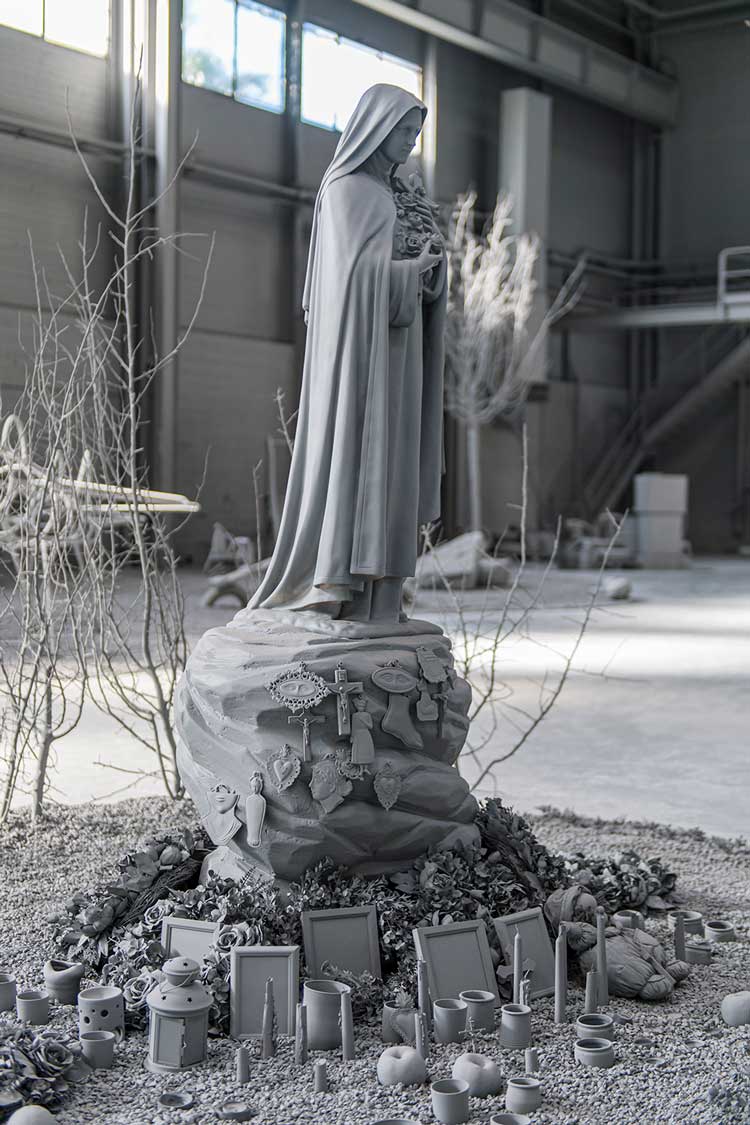 Maximalism is back: booming choirs, echoing rooms and immersive environments. This is art that dramatises rather than problematises. There are spectacular installations. For Grafted Memory System (2022), Ugo Schiavi has filled an abandoned museum hall with cabinets of vegetation, cables, fossils and bones, some human. Plant life sprouts from the remains. Hans Op de Beeck’s We Were the Last to Stay (2022) fits an entire campsite in an old factory warehouse. Everything but the ornamental pond is covered in grey paint, as if, like Pompeii, the village has been buried beneath volcanic ash and preserved as a warning to the future.

There is a palpable ruin-lust in the air. In Joana Hadjithomas and Khalil Joreige’s film Where Is My Mind? (2020), we see a sequence of beheaded, maimed and otherwise broken classical sculptures. Nearby, in a makeshift scaffolding exhibition display by Olivier Goethals, there is a selection of chipped casts of antique sculptures from the Musée des Moulages elsewhere in the city. Another section has paintings from the Musée des Hospices Civils de Lyon partially covered with bandage-like stripes of Japan paper to prevent deterioration.

Patching up seems futile though. Decay is everywhere. The painter Julio Anaya Cabanding reproduces artistic masterpieces then fragments them into pieces. Lucia Tallová’s Mountain (2022) collects crumpled paper drawings, arranging furniture and piles of coal around an installation of wooden bookshelves. It is like entering the fading memory of a home, now abandoned and left to rot. The gradual disintegration of the artworks seems to echo the similar dissipation of hope. 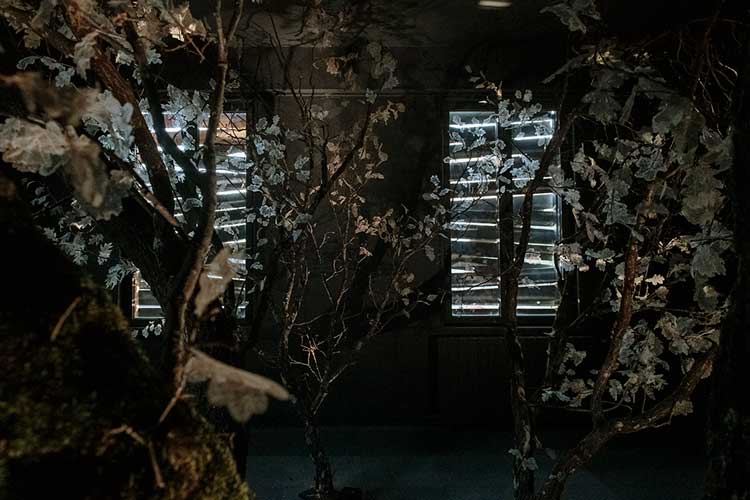 This fixation on what has been lost is reflected in the venues. There is a medieval manor, a former church and the disused pavilion from the city’s now-demolished abattoir. The biennale’s main base is the Usines Fagor, an enormous former domestic appliances factory that still retains some of its former machinery. An architectural highlight is Lugdunum, the museum of Gallo-Roman Lyon housed in an extraordinary 1970s concrete structure designed by Bernard Zehrfuss and concealed within a hill. Its tinted windows peek out over the ruins of a Roman theatre. With the notable exception of Seher Shah’s brilliant Argument from Silence (2019) – a photo-series that uses a sculptural fragment of a hand to meditate on displacement – many of the contemporary artworks are in danger of being overwhelmed by the riches of the museum’s collection. 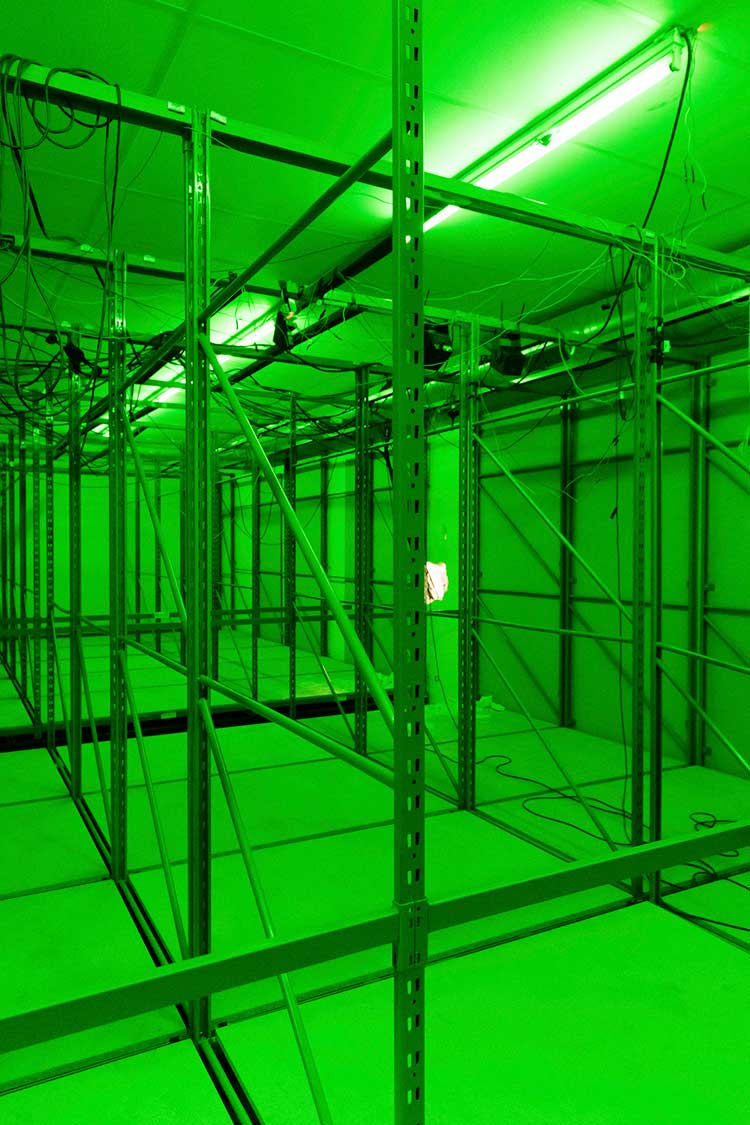 Then there is the Musée Guimet, a Beaux-Arts palace built to house a collection of Asian art that, soon after opening, was transferred to an identical structure in Paris. The building, after periods as a brasserie, theatre and skating rink, served as Lyon’s Museum of National History for almost 100 years before the collections moved elsewhere. Walking through its dusty rooms, many of which still contain cabinets and labels for departed exhibits, is a disarming experience. Many of the best works here, such as Schiavi’s aforementioned installation and Evita Vasiljeva’s Impulse (J or Imp) (2020-22), make use of the museum’s eerie spaces. Vasiljeva’s work turns old shelving units into a green-lit maze with sinister sound effects, evoking her childhood experience of burglaries in her home in Latvia’s capital, Riga. 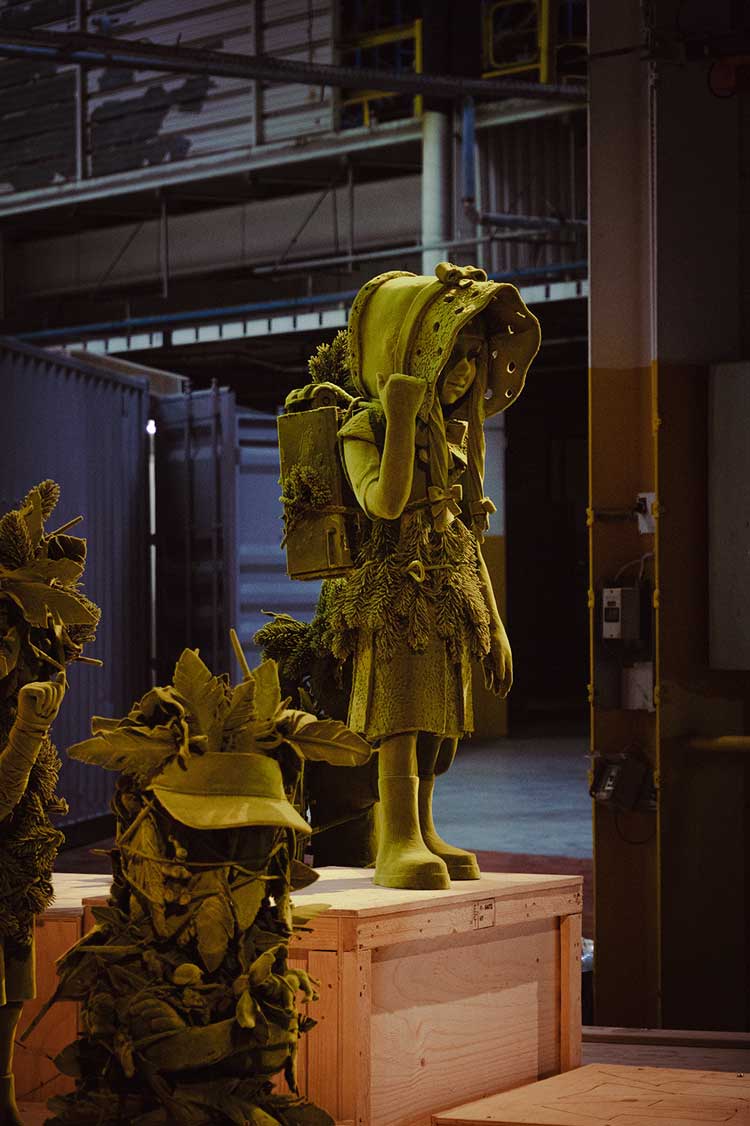 Not everything in this exhibition is so sombre. At Usines Fagor, Phoebe Boswell’s intimate film Dwelling (2022) captures pairs of black British people as they learn to swim. Kim Simonsson has peppered various venues with Moss People, green fairy-like sculptures that seem drawn from manga. But such things are only light relief from the more explicitly political ones. One of the most striking exhibits, Sylvie Selig’s Stateless (2017-19), is a 50-metre-long canvas that unstintingly depicts the life and death of a doomed young refugee, aided in her plight by an anthropomorphic hare. Selig’s Weird Family (2006-22), an altogether scarier set of humanoid sculptures than Simonsson’s series, stand vigil over it. A World of Endless Promise, which includes all the artworks discussed thus far, aims to explore “moments of resilience in the face of social, political and environmental upheaval”. Often that resilience is overrun by events. 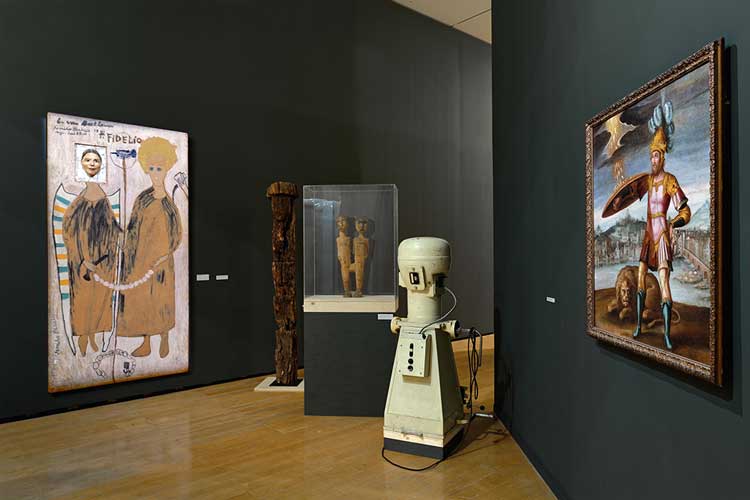 Over at MacLYON, things take a more playful turn. The Many Lives and Deaths of Louise Brunet, one of the biennale’s other two “layers” is a strange prospect. It begins with the micro-historical tale of Louise Brunet, a young Lyonnaise woman imprisoned in 1834 after taking part in the Second Canut Revolt – a rebellion of silk-weavers – before later moving to the silk factories of Mount Lebanon. Each section of the exhibition reimagines this marginal real-life figure in various places and times; one, for instance, casts her as an artist dying of HIV in 1990s New York. These are then explored through myriad artworks and objects, many diverting, and almost too much to take in.

The final strand of the Biennale, Beirut in the Golden Sixties, stands in direct contrast to the unmoored multiplicity of the rest. Spanning two floors of MacLYON, it is essentially a standalone museum survey of 1960s and 70s Lebanese art (indeed, it was previously shown as such at Berlin’s Gropius Bau). It traces an arc from creative ferment to disappointment, liberalisation to civil war: an important story, told well through the works of various artists. All of them are interesting, a few exceptional. There are numerous works by the Armenian-Lebanese artist Paul Guiragossian (1926-93), who turns huddled groups of people into alienated abstract marks. In his vast two-part painting The Funeral of Abdel Nasser (1970), his vertical brushstrokes themselves seem to lower their eyes to the ground in despair. Jamil Molaeb’s Civil War Diary (1975-76) paintings, in ink and watercolour, capture gruesome scenes in unstinting detail, whether prisoners stuffed in a trailer or a body dragged along by a car.

Towards the end, a more recent crisis intrudes. Hadjithomas and Joreige’s As Night Comes When Day Is Gone (2022) collects footage from museum CCTV cameras on the evening of 4 August 2020, when Beirut suffered an enormous explosion that destroyed a third of the city. We see people posing for a wedding photo sense danger and run away, their fate uncertain. Paintings begin to shake before a dusty cloud envelopes the museum. Afterwards, everything that remains intact is upset. I wonder what art can offer in response to such a tragedy. The Lyon Biennale does not offer many answers, but it illustrates the challenges beautifully.