The 15th Lyon Biennale has an ambitious theme and a vast new additional venue. But can it live up to expectations? 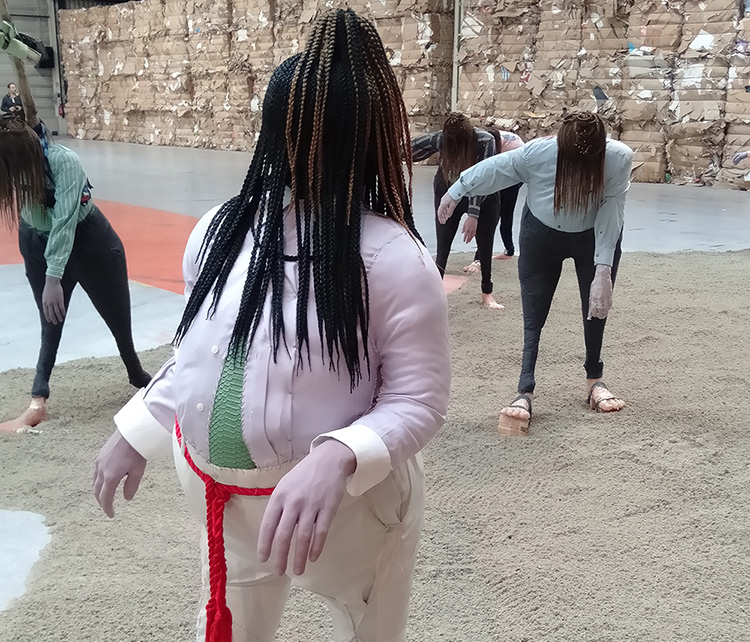 Simphiwe Ndzube, In the Land of the Blind the One Eyed Man is King? 2019. Courtesy of the artist and Nicodim Gallery (Bucharest/ Los Angelos, Stevenson/ Cape Town).

The theme of the 15th Lyon Biennale is Where Water Comes Together with Other Water, taken from the title of a Raymond Carver poem, and the aim is to expand the event into a diverse economic, cosmogenic and biological ecosystem. The works on show, which come from artists of all generations and various nationalities, were selected by the entire Palais de Tokyo curatorial team: Adélaïde Blanc, Daria de Beauvais, Yoann Gourmel, Matthieu Lelièvre, Vittoria Matarrese, Claire Moulène and Hugo Vitrani. Sadly, I feel that, although some of the works here are based on interesting ideas, those ideas are not very strong, and the lack of commitment from some artworks erodes the biennial’s ambitious theme. Despite this, there are still some gems. 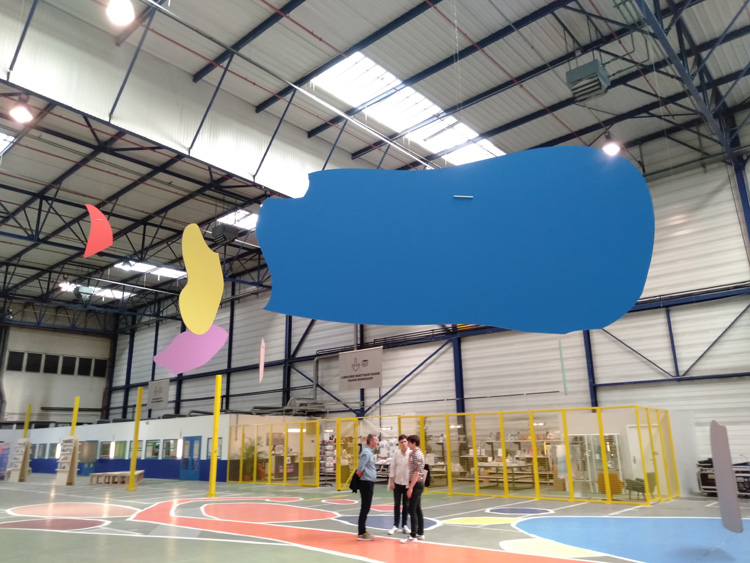 Stéphane Calais. The Small Garden, 2018-19. Courtesy of the artist.

To cater for works from about 50 artists, there are three venues hosting the biennale: the Fagor Factory, the Lyon Museum of Contemporary Art and the Central Peninsula, which comprises the Rue du President Carnot and the LPA Cordeliers car park. Walking into the new main venue, the vast disused site of the Fagor Factory, you encounter the coloured mobiles of the French artist Stéphane Calais, and begin to question how these works relate to the biennale’s theme. The Small Garden is decently installed, and below the big mobiles and around the vast hall, his miniature paintings are sporadically placed, emphasising a radical change in scale, but visitors may find it hard to see the relationship to the “world vapours” that the wall text mentions. 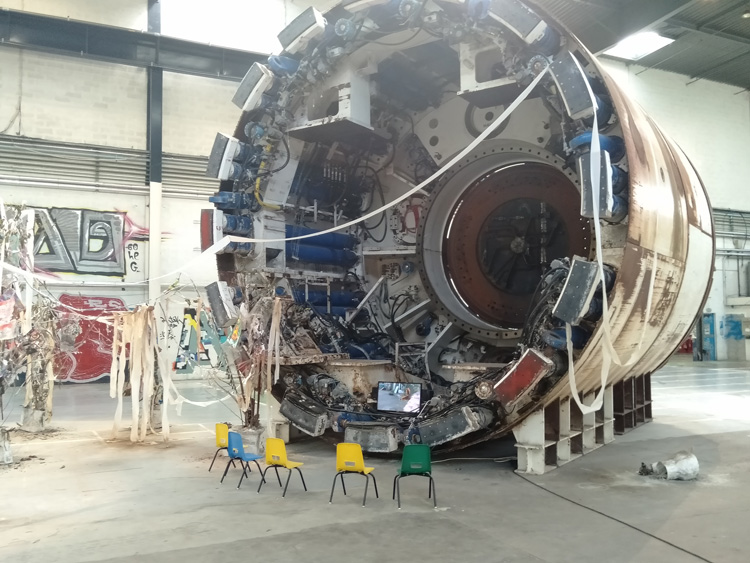 Sam Keogh, Knotworm, 2019. Courtesy of the artist and Kerlin Gallery.

Big installations are needed for the Fagor Factory’s vast 29,000 sq metre space and Knotweed, by the Irish-born artist Sam Keogh, certainly announces its presence. It is a system of sculptures unifying into a whole. The massive cutter-head of a tunnel-boring machine is surrounded by spindly transparent tubes stuffed with plants and dirt. Toilets are connected to these tubes adding to the network system. The work is an examination of the foreign buddleia plant and the invasive Japanese knotweed that eats into concrete, both of which are found in the United Kingdom and France. The UK has strict laws about the management of Japanese knotweed, but France allows it to grow. Alongside this, there are references to the “shipworm” mollusc and its destruction of wooden hulls. The cutter-head and the mouthparts of the wood-boring mollusc are very similar. The artist, whose studio is an old community centre near the site of the Grenfell Tower fire in London, has said that his work looks at poverty and the communities living in that area. The tunnelling machine, he says, reflects gentrification in the UK. Keogh has a video inside the cutter-head that presents the text of Doris Lessing’s The Good Terrorist. 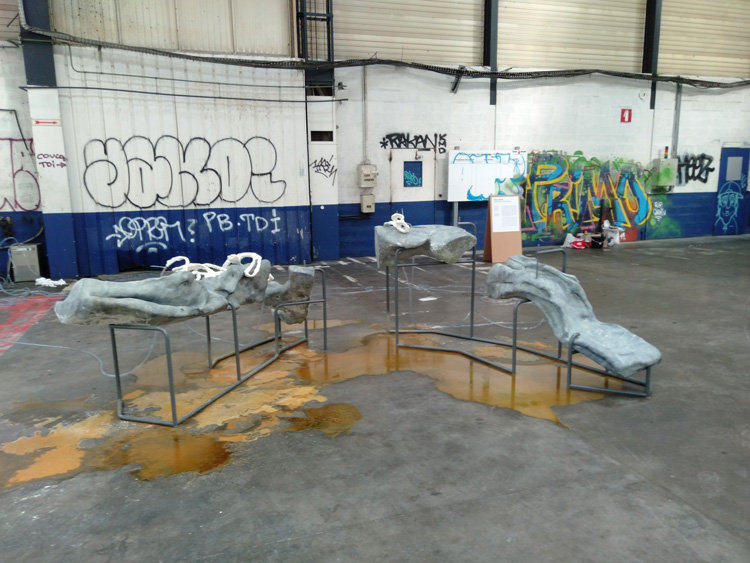 Translucent tubing and the power of dysfunctional organic machines are echoed in Saboteurs, by the Netherlands-based South Korean artist Mire Lee. Tubes contain various liquids as pools of grease are formed around clay sculptures. The exhibition label says Lee has an ambiguous emotional relationship with her materials, but, unfortunately, the materials and the ideas are disconnected. The materials seem to have shrunk within the vast space and the tension has gone. 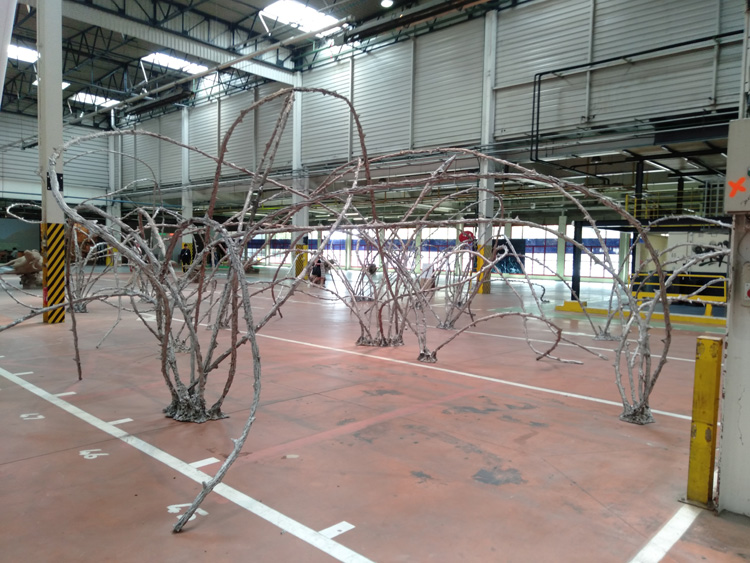 In another section of the factory, a biomorphic cast-aluminium installation of brambles reinforces the plant motif in Sam Keoogh’s work. This one, Roncier by the French artist Jean-Marie Appriou, could have worked better in the biennale’s second venue, the Lyon Museum of Contemporary Art. Roncier needs a white-cube-gallery space because the factory floor and the other works around it are distracting. There is a placement problem at the Fagor Factory. Austrian artist Thomas Feuerstein’s Prometheus Delivered is oddly low key because it has been diverted to the sidelines. There is too much space in front of it and not enough space behind and the graffitied factory walls compete with the work. 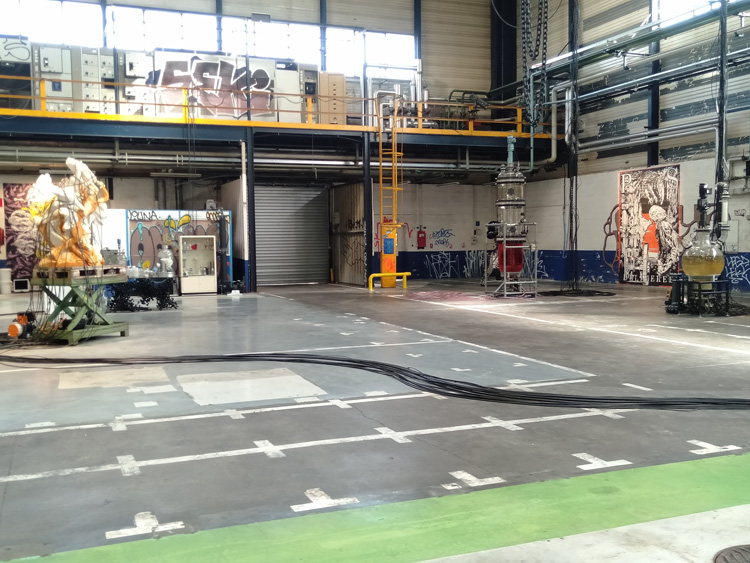 At the centre of the installation is a replica of Nicolas-Sébastien Adam’s marble sculpture Prometheus Bound. Feuerstein’s work narrates the story of the sculpture, which is slowly being destroyed by bacteria while, simultaneously, nutrients from the same bacteria are used to grow Prometheus a new liver in glass vessels. Appriou’s use of destruction and renewal are echoed in the biennale itself repurposing an old factory space as an arts venue. 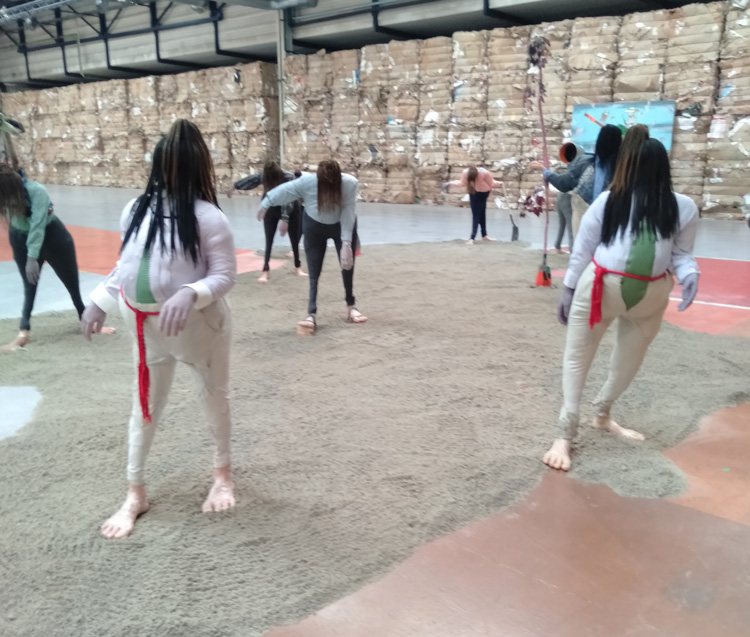 Simphiwe Ndzube, In the Land of the Blind the One Eyed Man is King? 2019. Courtesy of the artist and Nicodim Gallery (Bucharest/ Los Angelos, Stevenson/ Cape Town).

Hope is power, and South African artist Simphiwe Ndzube’s work In the Land of the Blind the One-Eyed Man is King? is full of hope. His carnivalesque installation looks at the relationship between exploitation and the potential for change. The work is humorous and colourful. Faceless figures with imaginative skin colours form a procession on either side of a wide dirt path. Some have shovels, but only one has an umbrella made of nylon. In the 18th and 19th centuries, umbrellas were made from silk and the exhibition label talks of successive uprisings by silk workers in Lyon as a link to social and political change. Looking at the bulky, unified figures, the message is more universal than local. The hybridity of these figures plus the title of the artwork stress this point. 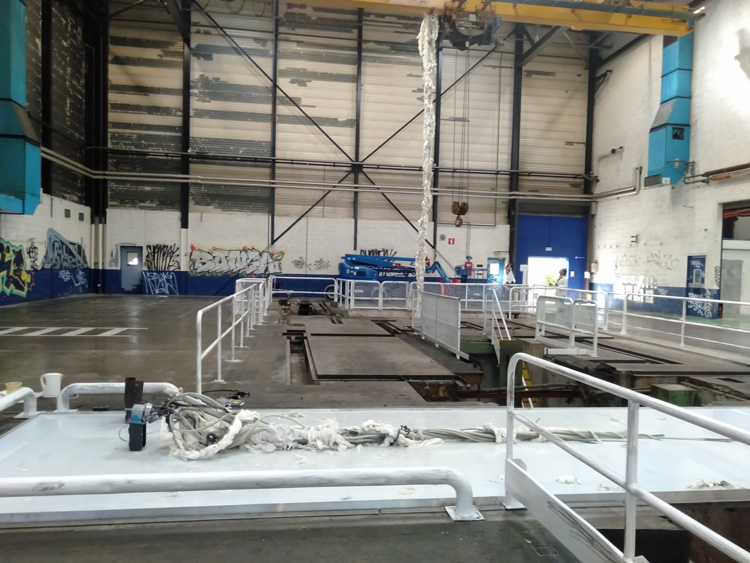 Moving away from figurative work, the abstract-like quality of Dutch artist Isabelle Andriessen’s Ivory Dampers is pared down to its basic form, focusing on its conceptual and physical delivery rather than the space. This is a time-piece artwork requiring you to visit many times to see the leisurely deterioration of epoxy clay and chemical crystals, supported by a steel and aluminium structure. A virus aids the deterioration, making a connection with the artworks of Keogh and Feuerstein.

There are many material and conceptual connections with artworks across the Lyon Biennale. These inter-relationships are, by accident or design, based on the quality of the artworks. Some have asked why the Palais de Tokyo curatorial team were invited to put on the 15th Lyon Biennale, criticising the event for being very French and very conservative and suggesting an international curator might have done a better job. Overall, though, the 15th Lyon Biennale has much to offer, especially in its commitment to emerging artists. 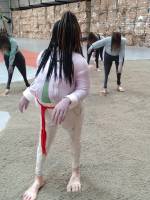