‘We need to have a connection to the place we live in. It’s an extension of ourselves and it’s also a form of communication,’ says Zoë Paul, who invites people to join her at The Breeder gallery in Athens to roll clay beads and have a cup of sage tea 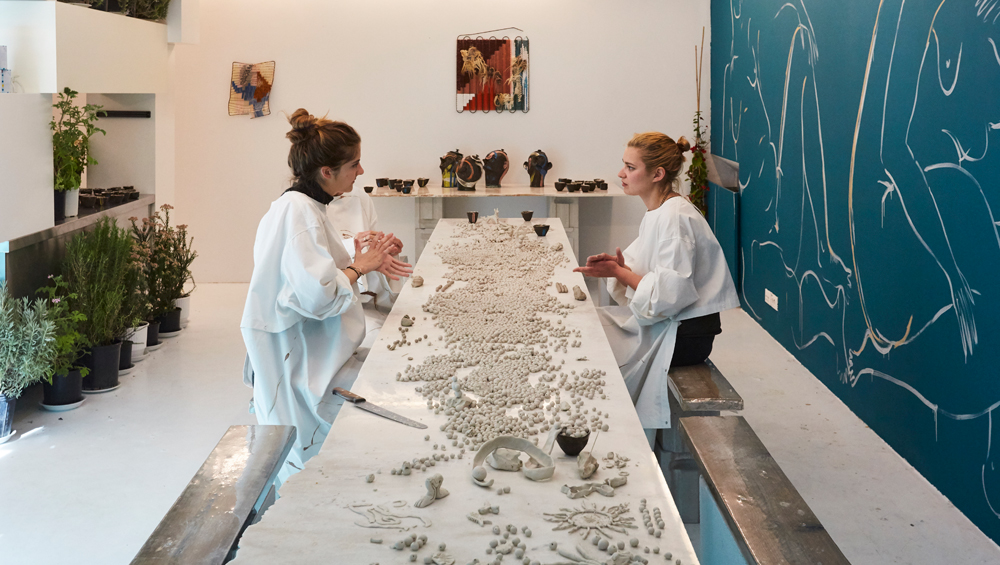 Zoë Paul’s exhibition opens during the first week of Documenta in Athens. Mayhem unravels on the ground floor of The Breeder gallery where the group show Si Sedes Non Is is packed with people. Three floors up, however, there is an atmosphere of calm. People wearing white linen gowns quietly sit around a long table, working small pieces of clay in their hands.

“I’m inviting people to come and sit at this long table and roll beads,” says Paul, who has created an experiential and almost theatrical environment on the third floor of the gallery. “You enter this recreation of a studio, or working space, through the entrance, where there’s a bead curtain, which eventually these beads will be made into,” she says, gesturing to the table where there are lots of little balls, at various stages of drying out, sitting in different sizes near mounds of clay and cups of cocktail sticks that have been used to poke holes through the beads.

“Meanwhile, it’s a space of femininity and a domestic space of hospitality,” she continues. Past the bead curtain, white aprons for visitors to put on are hung in a line on a rail. Decorated with outlines of dancing men, they were designed by Paul in collaboration with fashion brand Park Life. Beyond them, is the long marble table of clay forms surrounded by stools. Ceramic teapots and cups sculpted by Paul hold steaming sage tea for participants and, all the while, a frieze of drawn people dance along the back wall of the space.

“These are all elements of this idea of a house where animals and people live together, which is a metaphor for balance and equilibrium,” says Paul, who has inhabited the whole floor of the gallery, where there is also a small bar area and an outdoor terrace. “I like the first space being the studio, which is very clinical, and then comes the seedy bar space with LED lights and things found on the streets, and then the more spiritual outdoor environment with church candles. It’s important to create a mood – like a home.”

Paul builds abstract shapes and figures into the curtains she makes by arranging the beads by their tones of grey, from cool and pale to duller and denser. The forms organically ripple across the curtains.

“All of these beads have been fired in a raku kiln, which is filled with sawdust. It doesn’t actually cook the beads; they don’t go through the a chemical change to become ceramics. It semi-cooks them so that they stay in this rock form,” explains Paul. “The colours come, more or less, from the level of oxygen in the kiln – which is totally unreliable – and then I grade all the beads from darker to lighter colours and create a mosaic on the floor of an image.”

The resulting curtain is therefore guided by how the beads emerge from the kiln. “Sometimes they are all black, sometimes they are all white, sometimes you get more grey ones and then the figures change. It’s very organic. But, somehow, I’m thinking about the composition all the time as I’m making these beads: how would it translate or whether it would be nice to have an archway for people to walk through the bead curtain. This one will be a large frieze with a lot of figures jumping. Normally, it’s just individual figures, but I want the figures to start interacting, like a frieze or some kind of orgy or battle, with bodies falling over each other.”

Paul, who was born in London in 1987, now lives and works in Athens. She started making bead curtains in 2014, “for an exhibition in Milan that was about psychological space of the interiors and exterior domestic environments”. Domestic space interests Paul, especially in the context of her location in the Greek capital.

“What is a domestic environment?” she questions. “Especially in warm and Mediterranean places. There’s a certain way of living compared to the north. Here, people live a more open life. In fact, you even have to present yourself as more open. The house is like a mind and architecture like a body, and the bead curtain acts as a kind of threshold between the exterior and the interior.”

Her earlier “fridge weavings” – sculptural works of colourful wool woven around fridge grills, displayed on the walls – represent her research into cultural and domestic shifts due to climate: “Previously if you killed an animal, you would have to share it immediately, but with the invention of the fridge, it meant you could keep the meat, and that side of the social aspect of eating and sharing breaks down. Having this long table here relates to the dinner table as well, a family table for people of all ages interacting and being together. It’s about this community.”

The title of the exhibition, La Perma-Perla Kraal Emporium, is cryptic and intriguing. “I use the word ‘perla’ because it is more recognisable as ‘bead’ in other languages, such as French, Italian and Greek. There’s also this reference to the underwear brand, La Perla, because it is quite sexy – it is a domestic space, it’s beautiful and the gallery is on the same streets with all these prostitutes [The Breeder is located in the Metaxourgio area of Athens, where small red light bulbs above doorways signal open brothels]. The women on the walls are strong women. They have a femininity that’s strong and confident.”

“With ‘perma’, I was thinking a lot about permaculture and was researching Masanobu Fukuoka, a Japanese farmer/philosopher. He pioneered this style of ‘do nothing’ farming. He makes these seed balls and just throws them. He believes that everything should grow together. This element of permaculture is a metaphor for community.

“The word ‘kraal’ means bead in Afrikaans, but it’s also a Zulu term for a village that has a circular structure of huts and gardens. It comes from the word ‘corral’, which is a colonial word. And then ‘emporium’ has something glamorous to it, and that’s what art is – it’s luxurious and beautiful. I want to make something beautiful. And beautiful isn’t just pretty, it can have all the other elements to it.”

Paul’s parents are South African and both are artists. They moved to Greece during apartheid and Paul grew up between Greece and the UK. She studied fine art at the Royal College of Art in London, and then returned to Greece. “I grew up on this Greek island where my parents built everything. They didn’t have any money, they left South Africa with nothing, so everything was found, made or constructed – they built the house. I grew up living in this building site. Years ago, I was making all these tile sculptures during my undergraduate course, and people asked me: ‘How do you know how to tile?’ I thought everyone knew how to tile! I just grew up learning how to do these things. We need to have a connection to the place we live in. It’s an extension of ourselves and it’s also a form of communication, like how you dress and how you present yourself.”

Perhaps this might explain Paul’s intense relationship with the materials she uses. As we are talking at the table, she rolls beads almost by instinct in a smooth and continuous motion that has almost become part of her. “It’s been years that I have been rolling beads now. They are quite regular and I understand them. When I change to a different type of clay, it changes my thought process as well. This is a very soft clay, for example, but the dark clay is harder. When a process takes a very long time, you have all that time to question why you’re doing it and question the materiality when you feel it between your hands. You begin to understand the material, every bead you roll. Some of the bead curtains were in the Jewish Museum in New York and, when I went in there, I felt exactly how I had been feeling when I had been making them. It had been years before, but I could almost smell them. When you spend a lot of time with something, you really understand it.”

She says that her work is a reaction against the fast pace and almost disposable nature of art today. “The way we see art right now is very intense and very quick, but when you can take a step back to see the process that goes into it and the conversations that go into it, it makes it not just about the artwork itself or the end result. When talking, you’re forced to analyse. It’s not about quick decision-making. If you make decisions quickly, you don’t do so much questioning.”

At once magnetic and meditative, Paul’s emporium is beautiful, yet it is also a statement about people and community, domestic life and culture. “I think the way we live and interact with each other is also the way we interact with objects,” she says. An interesting window into her work and processes, the show also holds a message to slow down, start talking and enjoy doing nothing.