No Aloha is an exhibition of brightly coloured works on paper by Japanese artist Hayato Kiyuna. It is perhaps no surprise, since he is influenced by music and sound, that the exhibition is titled after one of his favourite songs by the band the Breeders

An exhibition of recent works by Japanese artist Hayato Kiyuna, titled No Aloha, is on display at the Wish Less gallery in Tokyo. Kiyuna was born in Okinawa in 1976 and is now based in Kanagawa, south of Tokyo. His small-scale works on paper are colourful and playful and lend themselves to the dynamic vocabulary of music. Kiyuna sees art and music as interchangeable and he is currently embarking on a new project for an album cover, which brings together his two interests.

Kiyuna works with acrylic, gouache, marker pens, crayons and pencils on paper. Applying the paint directly with his hands, he fills organic outlines with a finger-shaped line that is expressive and free. It is soft and curving with no angles or sharpness. It is also a characteristically wavering line, which casually meanders across the paper with only a little sense of direction, like an explorer. In some pieces, he has worked using copies and collage, which, almost undetectable, add multiple layers to the colourful chaos he creates.

Some of the works are vaguely figurative, showing the arch of a body, an eye socket or the hook of an arm. Even though they are not direct depictions of people, there is something very human about the works, perhaps because of the artist’s physical contact with the paper and the comfortable width of the finger he uses to apply paint. Many of his previous works have looked at the portrait, but still in his experimental, meandering style. In these works, he draws big, bright eyes with spiky eyelashes and gestural eyebrows, jawlines and hairlines.

Displayed in an uneven patchwork across a single white wall in the gallery, the various-sized works sit alongside each other, colliding and clashing. Two larger central works jump forwards, while smaller works, framed in red and white frames and hung in between, compete equally for attention. All the works in the exhibition literally fluoresce from the wall. The display of the works echoes Kiyuna’s visually overloading style in which everything goes.

None of the works is titled or dated, in a nonchalant rebellion against the framework of documentary and criticism. Kiyuna exists on the edge between contemporary art and illustration. His works are humorous and charismatic, but too gestural to be considered design. He fits in well with the collection of artists represented by Wish Less, a gallery that shows artists, designers and illustrators. The gallery is not worried about being pigeonholed because it exists for the artists and the artwork.

An A4 piece of paper above the works reads “No Aloha”, written in aqua-blue crayon in Kiyuna’s trademark wavering line. No Aloha, is the name of a song by his favourite band, the Breeders. “I really like the combination of the two words,” he says, “I think they have a good energy.” In terms of the interpretation of the words, he is happy for people to come to their own conclusions on what they mean.

Music is closely related to Kiyuna’s art practice. “I think music and colour, maybe lines, too, sit on an equal plane in my work, although they have different formations,” he says. “The word neiro in Japanese, which roughly translates in English to ‘tone’, fits my work well as it applies to colour and music. Music transforms colours.”

His works in the exhibition use colour to become bold, splashy and “loud”, a word associated with sound that we often use to describe colour. His works are also playful, because they show movement and humour – “play” being the verb used to describe music. These words, which naturally describe music, show how he has managed to translate and transform the two mediums into one.

For Kiyuna, music is also closely related to his process. While he listens to music in his studio, he finds that the sound becomes a focal point for his mind, rather than an inspiration. “Usually I listen to music [in my studio], but sometimes I block out what I am hearing,” he says. “I don’t feel that the music causes some kind of ‘divine inspiration’. I think of drawing and listening as two friends that meet and play in my mind, two things which coexist comfortably and give space to each other.”

Music plays an important role across his life and outside his art practice. “I am a huge music fan and listen to a wide variety of musical genres,” he says. What about his favourite type of music? “If I had to choose, I guess I would say punk, new wave, rocksteady and Okinawan folk are my favourites. I love bands such as Gang of Four, The Slits, Pavement and Carlton and the Shoes.”

Involvement with music has opened up new opportunities for Kiyuna, who is working on the album art for a Brooklyn-based band called DIIV, who discovered and approached him. “They respect my style,” he says. “I tried to produce the work using my usual methods without thinking too much about the band and their music.” As part of the exhibition, the limited-edition mix CD titled DEEP DIG HAWAIIAN by an Okinawan musician called Nobu-Shit is on display and available to buy. The artwork shows finger-painted marks in changeable green and red acrylic that curve with the shape of the CD in his soft, abstract style.

Kiyuna is definitely making a noise in Tokyo, and it won’t be long until his name is heard on the international art scene, probably sung to a new wave beat and a punk melody. 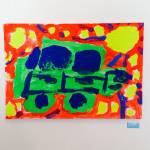 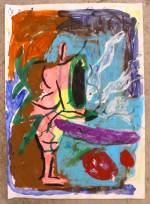 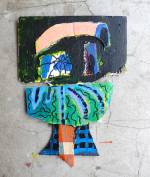