In the first exhibition at mother’s tankstation project’s new London gallery, Yuri Pattison’s context, collapse examines the world in which the office is everywhere and work transcends life

“Free time is nothing more than a shadowy continuation of labour,” wrote the mid-20th-century cultural theorist Theodor W Adorno.1 Employers grant holiday leave on the strict grounds that staff return rested and able tomore than repay the work missed. That said, letting employees leave the office is a relatively ineffective way of optimising output. In 1993, the furniture company Vitra came up with an innovative solution, dubbed the Citizen Office, which, at its core, set out to integrate labour and leisure. Unlike the rigid, uniform offices of old, a Citizen Office was (and is to this day) built around employees’ changing social and comfort needs. The navy table-sofa unit or “Alcove Cabin” that occupies the centre of Yuri Pattison’s exhibition at mother’s tankstation project provides a space for informal work or private meetings. But don’t be fooled by the plump padding; these sheltered sofas are not for napping. Vitra research claims: “The creation of sufficient opportunities for retreat engenders an increase in productivity of up to 30%.” Worker satisfaction is merely a byproduct of optimisation. 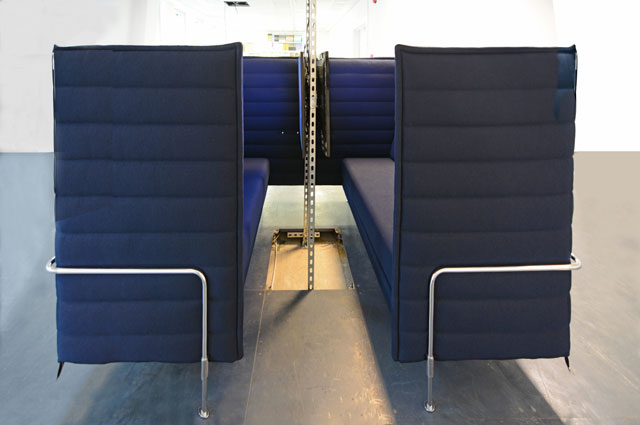 Like Pattison’s 2016 Chisenhale Gallery show user, space, the current exhibition examines the elision between living and working. (mother’s tankstation project’s new London gallery is, in fact, based in what was a commercial office block, now home to a range of art spaces). But whereas user, space looked at how the office has morphed into a site of leisure, context, collapse explores – to paraphrase Adorno – how life has become an appendage of work. 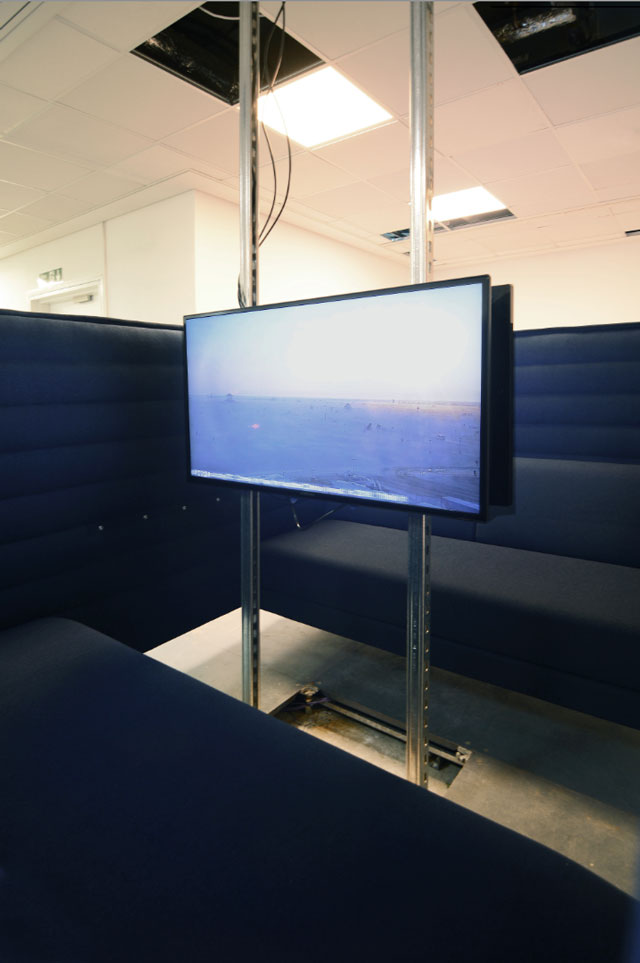 As remarked earlier, any attempt to vacate the office (for a holiday, or even just for the weekend) is never as simple as it sounds. Context, collapse, sheltered (burning man edition) (2017), the Alcove Cabin installation, functions as a kind of portal by which work transcends the boundaries of the office to life outside. A screen faces each of the two sofas, playing a webcam recording of 2017’s Burning Man – an annual festival that attracts around 70,000 people to Black Rock Desert in Nevada. For the indistinct figures moving through a sandstorm, their offices would seem indeterminately far away but in many ways the festival is tightly oriented around work. The weeklong event culminates with the burning of a giant wooden effigy of the titular “man” – a gesture that would seem to place the festival well outside of work – but, in defining itself against capitalism and its hierarchies of labour, Burning Man is inextricably shackled to work. 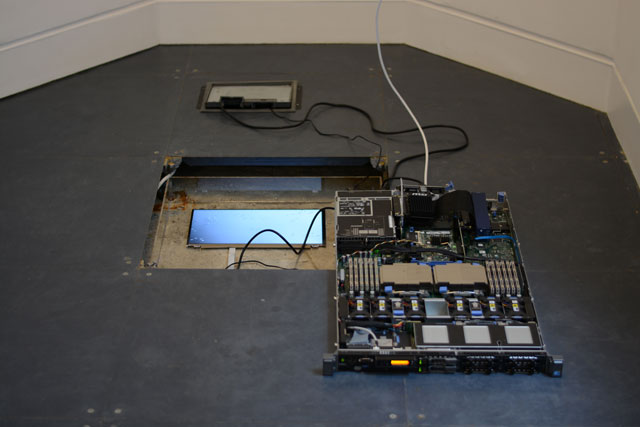 Semantics aside, what began as a hippie gathering in 1989 has become a networking event for the super-rich. Dressed like Mad Max extras, CEOs and venture capitalists hire new staff and close multimillion-dollar deals. As the viewer can see from the footage, which Pattison appropriated from the festival’s webcam feed, people still stay in tents or basic RVs, but a growing number of tech-execs arrive in private jets and live in pre-installed luxury camps with 2:1 servant-to-guest ratios.2 Tesla’s Elon Musk, Google founders Larry Page and Sergey Brin, Jeff Bezos of Amazon, and Facebook’s Mark Zuckerberg have all attended in recent years – aren’t these the very men the festival is dedicated to burning? 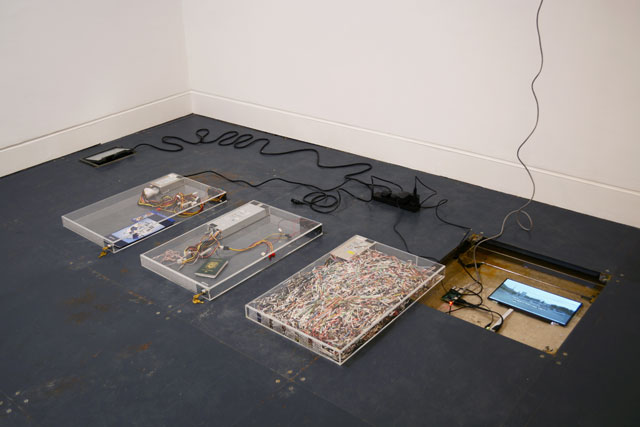 On the contrary, the festival’s organisers have monitored and engineered the influx of higher-income Burners. Black Rock City, as it is called, has it own census that shows that between 2010 and 2016 the number of attendees with annual income of more than $300,000 (£227,430) a year has risen from 1.4% to 3.4%. Pattison explores the link between city planning and social control in context collapse surveys (2017), a video in which a camera moves across hyper-realistic models of world cities. Occasionally, staff appear in shot; they tower over the skyscrapers they build, highlighting the way real cities (Black Rock included) provide a site to micromanage large populations. 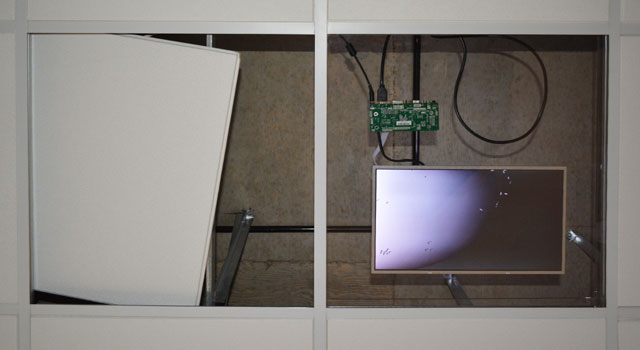 In a Q&A at Google’s 2013 I/O, Larry Page advocated building mechanisms that allow tech firms to trial new social models: “We should set aside a small part of the world […] Burning Man, for example […] As technologists, we should have some safe places where we can try out some new things and figure out […] the effect on society […] without having to deploy it into the normal world”.3 Relaying the way Page regards Burning Man as a technocratic testing ground, peace mode (on) – context, collapse (2017) and peace mode (off) – context, collapse (2017) display crowd modelling simulations that are controlled by the artist via a Dell PowerEdge R610 server in the gallery. Groups of featureless grey bodies move across a featureless grey landscape much like the Burners in the sandstorm mentioned earlier. Via the server, Pattison can not only modulate the gallery’s ceiling lights but also whether or not the simulations kill one another, demonstrating the ease with which technology can manipulate both the physical and digital worlds.

Bearing in mind that crowd simulators do not simply model behaviour but optimise it, too, with technologies like this, there are no limits to which digital capitalism may pursue accelerated productivity; the more technology innovates, the further work transcends.

References
1. Free Time. In: The Culture Industry: Selected Essays on Mass Culture by Theodor W Adorno, edited by JM Bernstein, published by Routledge, 2001, page 194.
2. A Line is Drawn in the Desert: At Burning Man, the Tech Elite One-Up One Another by Nick Bilton, the New York Times, Fashion & Style, 20 August 2014.
3. See https://www.youtube.com/watch?v=AfK8h73bb-o, from 24:32.