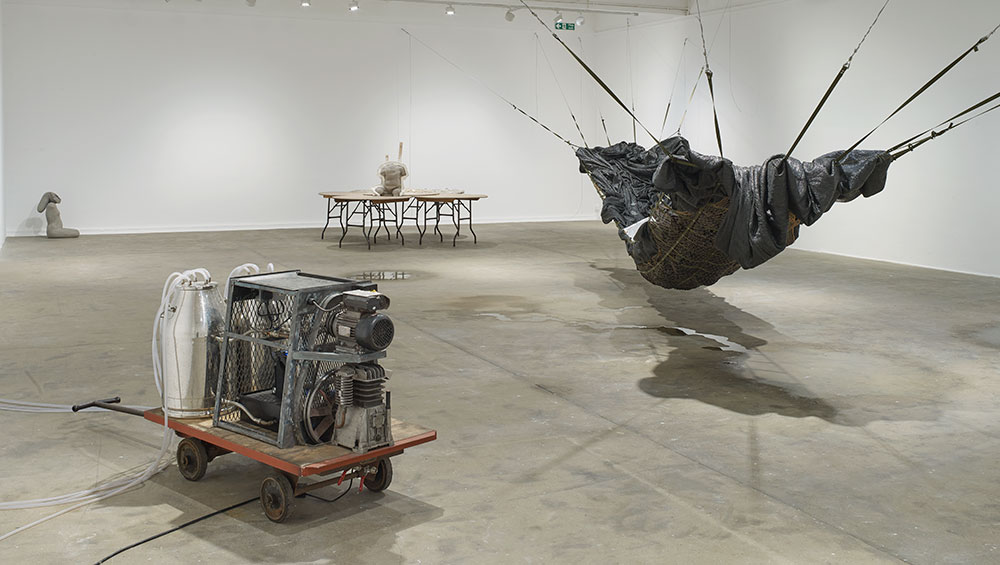 A huge hammock is slung from one corner of the Chisenhale gallery to the other, hovering just above the concrete floor. Made of rope and shiny black plastic netting, it glistens under the gallery spotlights. The fabric is bunched and crumpled, with piled chunks of breeze-block, plasterboard, insulation foam, metal, wax and cement gathered loosely within its folds. Jaded Ribs (2019-21) has nothing to denote the support or comfort usually associated with a hammock. 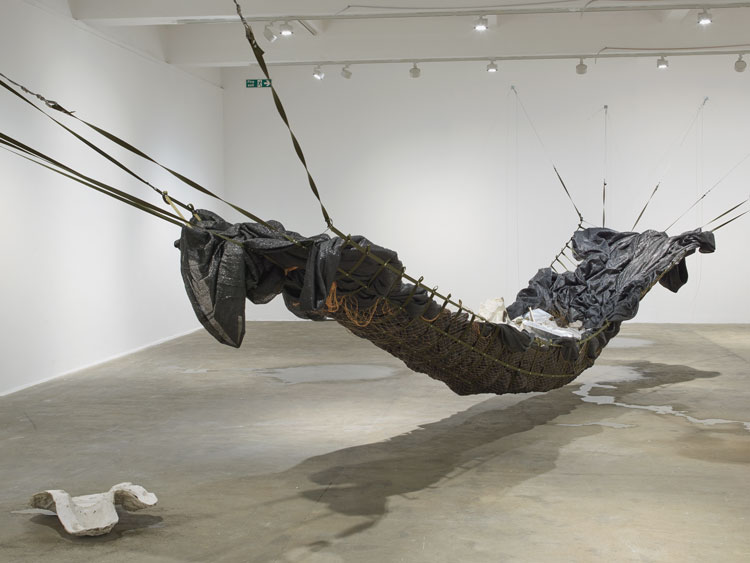 Yu Ji was born in Shanghai in 1985 and, although she now lives and works between there and Vienna, her practice and process are still very tied up with the place in which she was raised and where she runs Am Art Space, the only independent not-for-profit art space in the city. She was one of the artists chosen to represent China at the 58th Venice Biennale in 2019, where she showed a series of concrete busts and torsos (Flesh in Stone), as well as a web of rope-like iron chains strung from the ceiling and coated in resin. These works, I recall, provoked intrigue and unease at the lack of softness, sensuality or humanity in the truncated concrete figures, contrasted with the seductive glow and translucence of the resin-coated chains. In 2018, she told Living Content magazine: “In my work, I’m not just trying to control the medium, but I’m rather trying to learn from it: how to relate and communicate with it and also how to allow it to communicate with its surroundings.” 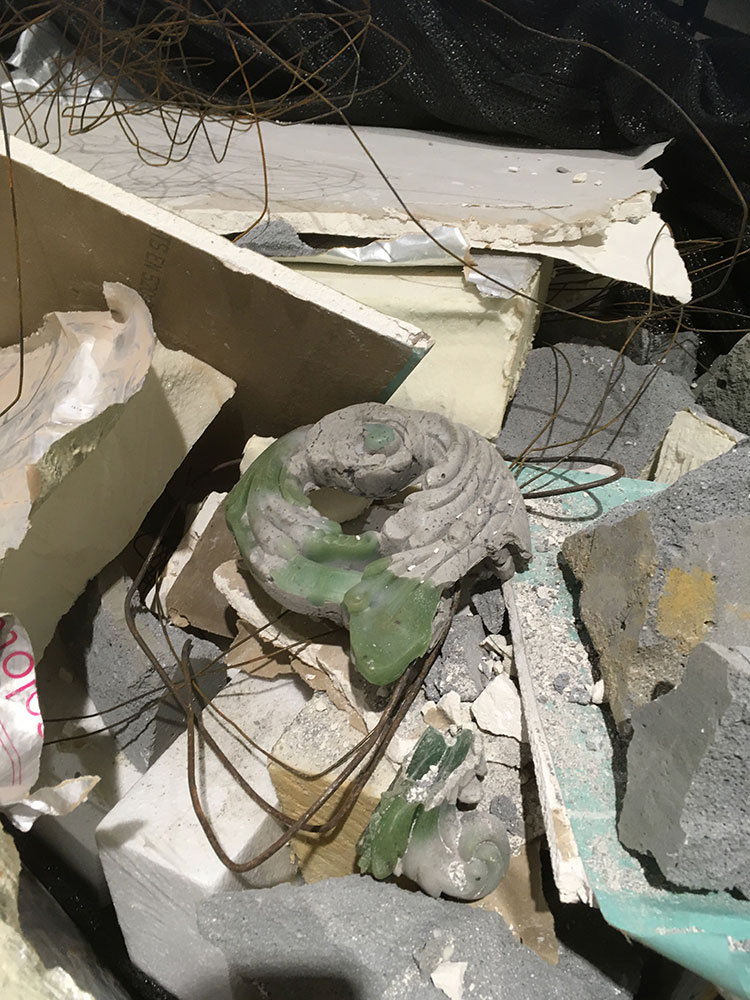 For this Chisenhale commission she is definitely communicating something of her surroundings: this specific part of east London is characterised by rows of modest Victorian terraced houses and the 20th-century estates that sprang up in its bomb-damaged neighbourhoods, as well as the canal networks that weave through its backstreets (one runs alongside the Chisenhale building). Built in the heyday of the Industrial Revolution to transport goods inland from London’s booming dockyards, the canals these days are quiet backwaters, frequented by people on foot, bike and boat, their debris-strewn banks now under pressure from vigorous regeneration. But Yu Ji has also brought objects from her studio in Shanghai to mix in with the wreckage from London construction sites. Which is which? It is impossible to say. And perhaps that also says something profound about globalisation – especially given that much of London’s current construction boom has been powered by Chinese money and developers. I am drawn to one almost charming section of cardboard resting in the hammock, its top leaves torn away by friction to create an exuberant frill. 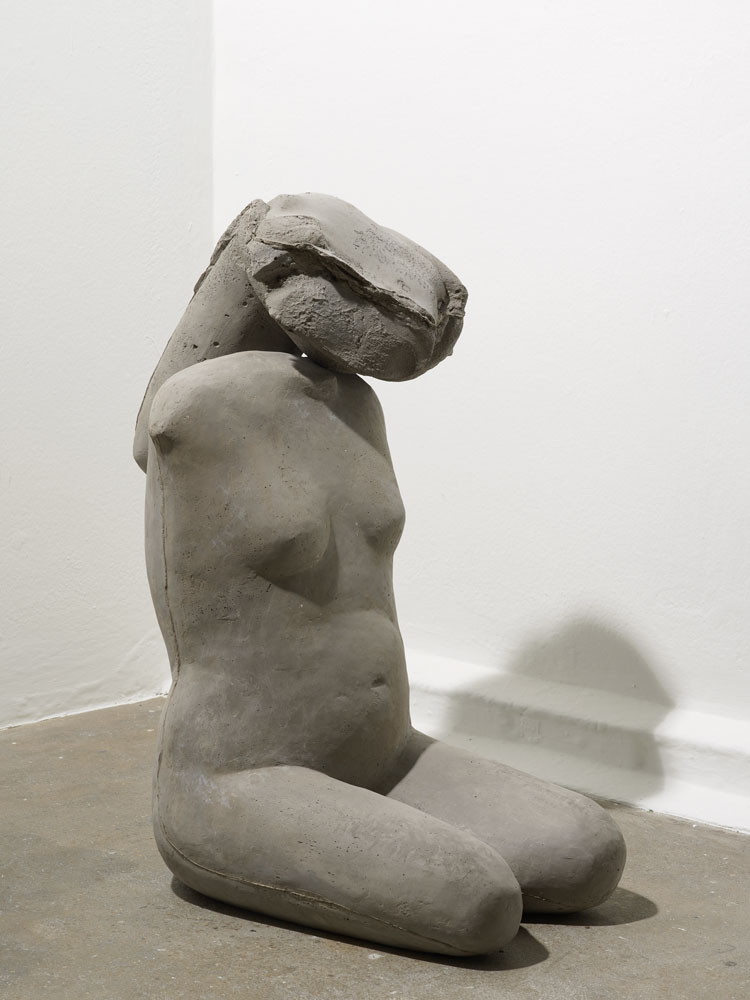 Other pieces in the show include more of her concrete torsos – one, forlorn-seeming, decapitated version resting in a corner (Flesh in Stone – Rema Rema 2001 (2021)), the other sitting on a group of tables. A top layer of concrete flesh peeling away from its midriff is apparently a reference to her giving birth to her first child (Flesh in Stone Ghost No 8 (2021). The exhibition leaflet states: “This new series of sculptures comments on human interdependence, exchange and transformation.” I am possibly more intrigued by the way the tabletop on which the torso is seated has a hole cut out of it, to accommodate the torso’s footless leg. 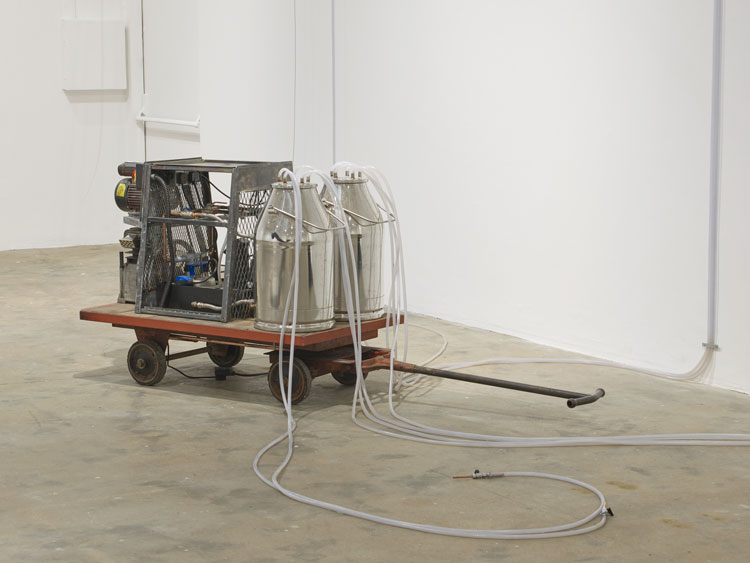 Found furniture, in various states of abandonment and arrival also appeared in Forager, an installation she created for the Edouard Malingue gallery in Shanghai, at the end of 2020. The work was situated in an empty, stripped-out apartment, with pot plants and domestic objects strewn around the deserted space, communicating an uneasy mixture of hurried departure and ill-prepared arrival. But this installation was also enlivened by a text she had written specifically, proposing how a shipwreck survivor might cope in isolation, with just a handful of cherry tomatoes. It was an excerpt from a text she contributed to Cookbook of the Pandemic Year, a publication from China’s UCCA Center for Contemporary Art. In this work, as with her Venice Biennale offering, there are nuggets of human or material connection and visual nourishment, if only through the shimmer of metal encased in resin, or at least flourishes of plant life. But there is little of that nourishment in this London show. Plant matter has been brought into the gallery, but in the most abstract form: in the far corner sits Foraged (2021), a steampunk contraption composed of steel milk cans on a rusting timber and metal trolley, with narrow plastic tubes emanating from the cans, up the walls and across the ceiling, to drip plant-infused water into the gallery itself. The puddles, when I see the show – just before its opening – create a patchwork of seeming neglect across the gallery floor. By the time you read this, they may well have sprung a layer of mould or algae, from the canal weeds that Yu Ji has foraged from nearby. 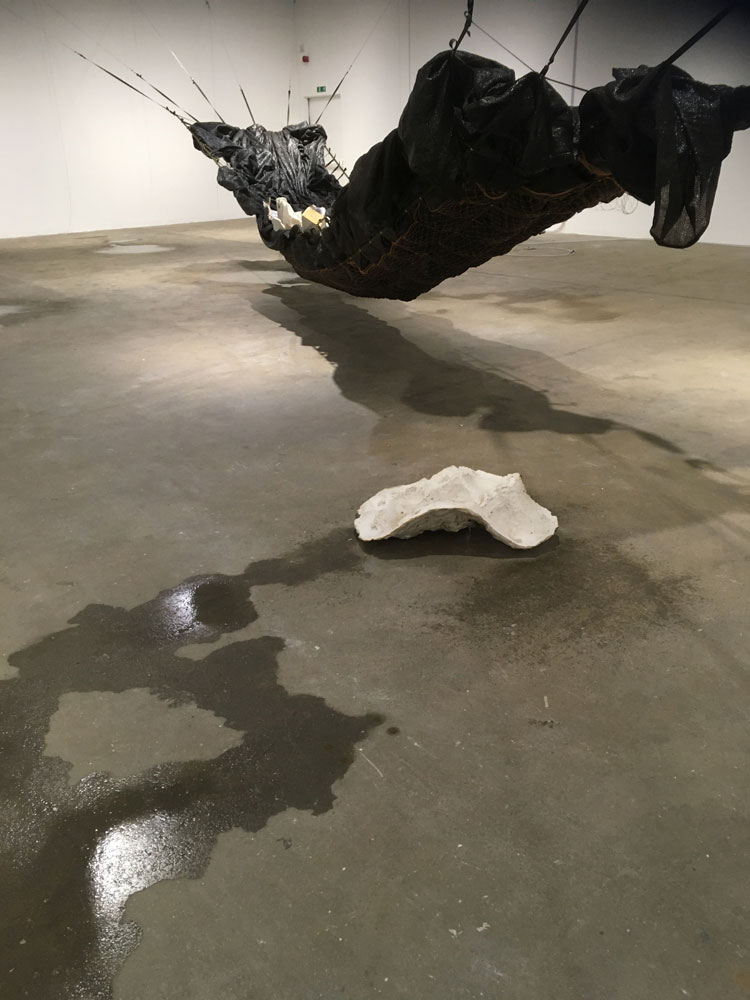 I find myself wondering: does she see London as such a comfortless space - its dominant concrete, constructed character overpowering all presence of, and sense of delight in, nature? A bilingual publication in English and Mandarin, Wasted Mud, produced to commemorate this show, might reveal more. But the experience of the show itself left me eager to immerse myself in the greenery of nearby Victoria Park, or float away down that tranquil canal. 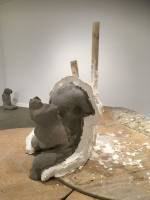 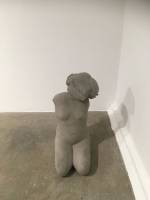 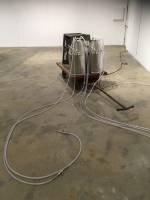 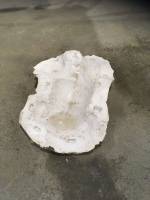 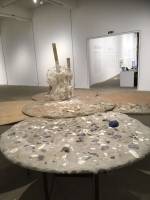