Offering the quiet thrill of a cool oasis in the park, the Frick Collection has mounted a connoisseur show of little-known work by a master of his time that both instructs and refreshes 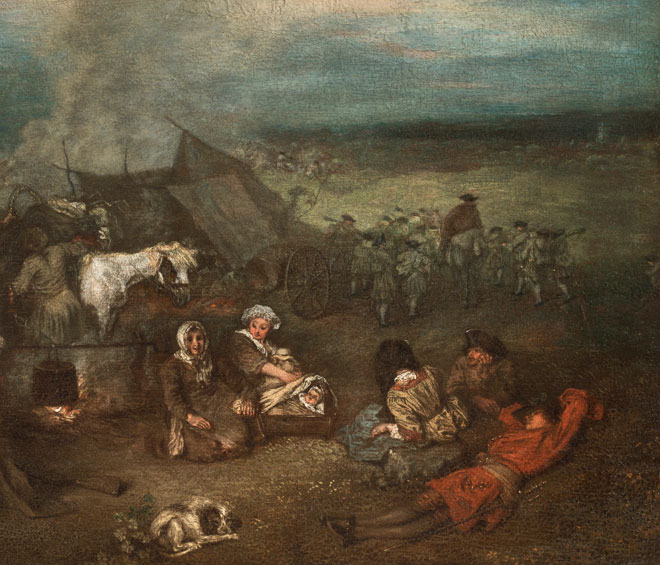 It is sorbet season in Manhattan, which translates in the galleries to group shows, and in the museum world to closely curated statements about single artists and their time. Making an exception for the stunning Diane Arbus show, just opened at the Met Breuer, which weighs in like a 10-course meal and commands a separate review, my favourite palate cleanser, tucked into the lower-ground floor of the Frick Collection, is Watteau’s Soldiers: Scenes of Military Life in Eighteenth-Century France. A small jewel of a show, passionately curated by inhouse Aaron Wile and tucked away from the large neighbouring museums’ teeming masses, it pulls the tired body into the cool of its quietude. A miniature marvel, its subject is a seeming oxymoron in that this groundbreaking painter, called by many the best of his era, is known to the larger public mainly for his romantic “fêtes galantes”. Mention Jean-Antoine Watteau (1684-1721) and you conjure up images of frolics on swings in luminous gardens beribboned by cupids – the breakaway gaiety that was to so greatly influence François Boucher and Jean-Honoré Fragonard and radically divert the course of the history of art.

It happened, however, that starting at age 25, six out of this young artist’s short 36 years were given over to recording France’s sorties on the battlefields of the horrific War of the Spanish Succession (1701-14) - not the blooded scenarios of roiling frontline action but, more insightfully, the deceptive behind-the-lines leisure moments between skirmishes. The value of these works, apart from their beauty, is to walk you backwards, as it were, to the years preceding the “fêtes”, to show how Watteau’s skill in creating a charged atmosphere revealed a subtle understanding of the human condition that would lift his entire oeuvre above pictorial narration. While far from the later delights of the Isle of Cythera (subject of the famed painting that elected him to the Academy), the caravanserais of off-duty officers, infantry, drummers and guards trailed by their attendants, suppliers and colourful hangers-on, advance Watteau’s ultimate achievement as the first rococo painter by providing an arena for allegorical backdrops and an opportunity to capture the full gamut of body language between braggadocio and pathos.

Of the seven military oil paintings that survive, the Frick was able to source one from the York Art Gallery, York, another from the Museo Thyssen-Bornemisza, Madrid, and a third from the American private collection of Ariane and Lionel Sauvage. Happily, although the three in Russia were not offered for loan, the Frick itself owns a beauty, The Portal of Valenciennes (c1710-11). All four reward close viewing. Pointedly contrasted with The Cavalry Camp (1638-68) by Philips Wouwerman (the art star of his day, a declared influence on Watteau, and an irresistible curatorial juxtaposition in that it, too, is owned by the Frick), The Halt (c1710) positions the foreground figures like actors on a horizontal stage marked by tape – all lined up correctly from the point of view of perspective, but not communicating with one another, as though collecting their thoughts during the play’s intermission: the women – most gowned for a ball and defying distinction between wife and prostitute – look towards but beyond each other, connected only by the disconnect of their gazes. Elaborating further, The Line of March (c1710) is tellingly not a line, allowing for what was to become Watteau’s signature wraparound views of seated, standing, moving and still figures. Progressing to a philosophical worldview that rejected moral pronouncement, The Supply Train (1715) centres on women cooking, cradling a baby and flirting with two soldiers at such a remove from violence and death as to frame war as a newly ploughed field for survival.

Of particular interest are the exhibition’s 13 related chalk drawings, both for Watteau’s mastery of the medium and for what their dexterity reveals about this master’s technique that places him both apart from his colleagues and ahead of his time. Nuanced, novel, seditious, they stand free of their compositions as works unto themselves, independent almost of the paper that confines them. Here we see how, in contrast to the prevailing practice of making a preparatory sketch for a planned-out tableau, Watteau inserted into fanciful scenes as-is figures engaged in the minutiae of daily life that he lifted from his sketchbooks to conjure stop-frame moments from a plotted continuum of time reimagined. There was already much to mine (although only 670 drawings survive, by the time of Watteau’s untimely death at the age of 36, he would produce more than 2,000 – some say as many as 4,000). Prefiguring the trois crayons technique of carmine, black and white chalk that he may have borrowed from Rubens but would later make his own, the sure strokes of red chalk that give a soldier’s crossed swords the panache of a musketeer and a swirled cape the strut of a dandy, flesh out stock characters into men-in-full. Some figures are presented twice, some are shown from the back. The deliberate disjunction feels very fresh, very modern. Modern, too, the sense of movement conveyed by multiple figures playing off one another – as with the soldier in Three Studies of Resting Soldiers (c1713-14) shown lying on his back next to another lying face down – or are they the same figure? The sense of a wraparound viewpoint augments with figures clearly doubled, as in The Portal of Valenciennes. It has been said that just as JMW Turner previewed impressionism, Watteau foreshadowed surrealism – a stretch, perhaps, but I would take it one further, and allege cubism.

The final takeaway is the impact of intimate enjoyment: masterful drawings just discovered, and paintings that convey the authenticity of a canvas left untouched – some too dark, perhaps, and abraded with age, but looking just as such scenes look today should one come across them in a quiet space that suggests a library rather than a museum, a space such as the one offered by the Frick’s lower gallery.