Wael Shawky at the Serpentine presents the premiere of the artist’s latest film Al Araba Al Madfuna II (2013). It also provides an opportunity to see The Horror Show File (2010) and The Path to Cairo (2012), the two films that make up his Cabaret Crusades series, along with a display of the ceramic marionettes crafted by Shawky and featuring in The Path to Cairo.

Shawky, who was born in 1971, grew up in Alexandria, Egypt, where he experienced a culture in which the ritual of storytelling was closely interwoven with religion and history. At the opening of his first major solo exhibition in London, he told me the story of his recent work, which had a narrative unto itself, starting in 2008 in Italy.

After Telematch Sadat, a restaging of the assassination in 1981 of President Anwar Sadat, which Shawky made in Kenya in 2007, he began to explore the history of the Crusades, some of the most pivotal collisions between east and west in the history of the world. When, in 2010, he was in residence at the Cittadellarte Pistoletto Foundation, he was inspired by a collection of 200 marionettes at the Lupi museum in Turin. Seeking to create an unconventional narrative for his research on the Crusades, he persuaded the museum to let him borrow some of the marionettes to tell the story. Shawky describes the marionettes as “extremely extra-ordinary”. He says: “I somehow convinced the museum to lend us 120 marionettes for a long period of time, to change their outfits and to put makeup on them. This kind of makeup didn’t directly affect the marionettes – you can just erase it afterwards. There was always someone with them, even when we were filming, to make sure everything was going to plan. It wasn’t an easy process, but the museum was very good.

For The Horror Show File, the artist used these European-style marionettes to tell the beginning of the story of the Crusades, starting from the speech by Pope Urban II in 1095 and ending with the capture of Jerusalem in 1099. The scenery is realistic with complex sets, yet the marionettes disrupt this vision of realism. Their actions are unnatural, almost demented, yet they do not fail to entertain and intrigue. Their faces are worrying – glossy eyes and exaggerated cheeks, mouths moving up and down to the sounds of words as if in a badly dubbed movie. Controlling strings are unconcealed and their movements are theatrical, as with upturned hands they ask a universal “What?” while they lurch and bob across the set.

Speaking about the second installation of Cabaret Crusades, The Path to Cairo, Shawky told me: “I knew I wanted to make a series, and I wanted to make each film completely different from the next; the style, the music, the marionettes.” The project was much bigger, covering 47 years (1099 to 1146) and requiring more research. And this time he made the marionettes himself from scratch. For this film, he looked to a narrative published in 1984, The Crusades Through Arab Eyes by the Lebanese journalist Amin Maalouf. “I was more fascinated by the title than the whole book, to be honest,” Shawky tells me. “It completes the idea that it’s a history, but it’s told from different points of view, history is not fixed.”

So what about the marionettes for The Path to Cairo? “These were completely different, right from the beginning, but I used the same mechanical technique. I moulded the ceramics myself with a fantastic team in France. I sketched the faces first, so the each marionette is unique.”

Shawky’s marionettes are regimentally hung and displayed in a glass cabinet at the Serpentine. They are full of character, bursting with expression, yet completely vulgar; camels wearing dresses, thin and bony giants or chubby-cheeked dwarves with patches of thick, black, coarse hair, buck teeth and pigs’ snouts for noses. For Shawky, however, these funny-shaped marionettes are just tools for him to unravel a story. “The most interesting part was choosing which character plays what, and it’s interesting to play with this in a surreal way. For example, my favourite, Hassan al-Sabbah, founder of the Hashashin group, I made like a serious kid, and Mawdud, Atabeg of Mosul, I made him like a camel.” The camel-resembling Mawdud is particularly interesting, with his wavy black beard and tall black hat. One of my favourites, Radwan, ruler of Aleppo, with his round black eyes, looks like a stocky mushroom wearing a red gown.

The set in The Path to Cairo is far more two-dimensional than that in the The Horror Show File, which is more rounded, realistic and European in style. For the Arab perspective, Shawky took inspiration from Arabic and Persian painted miniatures, with their flat-painted outlines of scenes. We pan over layered skylines and through city plans from which the story unfolds. “I discovered this man, Nasuh Matriksi. He was a philosopher, gun-maker and writer from Bosnia. He lived during 1400, almost 200 years after our story took place, but his is the earliest document we found that has plans of these cities. Most of the cities in this film – Istanbul, Damascus, Aleppo – are based on his work.”

Shawky explained to me about his role as director for the films. “I had tons of documents to work with, so the parts you end up using really shape the narrative. In some ways, this is why my films are a critique of how we read history. You will see a scene by Usama ibn Munqith, who was the foreign ambassador of Damascus and a historian. I used many of his sentences in the film because he wrote diaries – with the idea of being very precise to the degree that you begin to doubt the truth.” Shawky also used other tools to make this narrative his own, focusing on smaller details. “I felt a need to concentrate on parts of history that were not famous, for example the relationship of the narrative to the Hashashin group, from which the word ‘assassin’ came, and to discover the reason why there were so many killings of Arab leaders in this time.”

His most recent work, Al Araba Al Madfuna II, shows for the first time in this exhibition. Shawky retells two of the parables of novelist Mohamed Mustagab (1938-2005), Horsemen Adore Perfume and The Offering,using children as the mouthpieces for words spoken by adults in classical Arabic. The piece shows the transformation of historical fact into narrative through its exchange within social contexts. Children are arranged in groups in various local and public scenes delegating and discussing as their conversation becomes the narrative. They occupy various hierarchies of social level, as an older child speaks to younger children gathered around her. One boy, wearing a thick black moustache, fiddles with his ear, and another’s gaze drifts off into the distance. Their stiff, copycat movements are telltales of the amateur acting that Shawky embraces. These children are oblivious to the historical meaning behind the story they “tell” and its contemporary meaning and relevance to the politics of today; the perspective is neutralised.

Speaking about his decision to use children and marionettes in his films, Shawky said: “I don’t like acting, or when there is an actor who is so cliched by cinema and TV. Marionettes have no acting skills, only topic and image, and kids do not have dramatic memory, they are just playing. In both forms there is no gender layer, just society, and that’s important because often narratives are so complex already that you don’t need to add that element.” But he added: “The marionettes were easier to work with because you can set up a small world of scenes with maquettes and control everything. Working with kids is crazy. Beautiful, but crazy.”

Shawky’s work is a method of retelling history; selecting details, changing perspectives and reassessing how we view, hear and read the past. In one way it is about documenting it and in another it is about controlling it, in order to see the present more clearly. In contemporary times, source material gets even more complex and it is hard to know how much detail and how many perspectives we are, or can be, exposed to. During a discussion of the events of the Arab spring, which took off in 2011, well after he began his study into the Crusades, Shawky said: “My role as an artist is not reactionary. Current events are so changeable and I cannot follow these. My role is to criticise how we look at history and maybe when all this is finished, we can look back.”

• This article was amended on 29 November 2016. The marionettes Wael Shawky used for The Horror Show File were loaned from the Lupi museum in Turin and not from the Cittadellarte Pistoletto Foundation, as we said in an earlier version. This has been corrected. 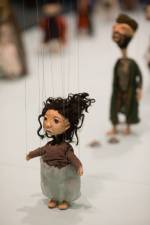 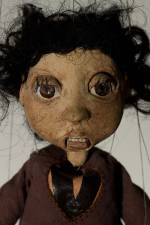 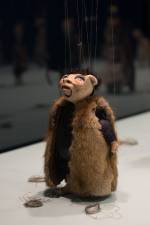 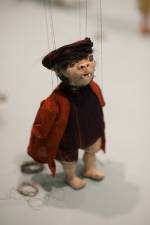