Suggestive, affective, nauseating. How to respond but with a wince, looking quickly away, perhaps a shudder right through to your groin, and then looking back to check whether what you thought you saw, really was what you saw?

In 1960s Vienna, four men began producing art like never before. Along with body art, performance art and Fluxus elsewhere, they sought to take painting away from the constraints of the canvas – to use the body as both brush and canvas, to test its limits, to use it as raw material, raw flesh, to be butchered and reconstituted in performances or aktions, a full-on rejection of object-based or commodifiable art forms. Their wilfully transgressive and violently sensational works, sometimes performed for an audience, at other times for the camera, are looked on today as a body of work labelled as Viennese Actionism, and this joint exposé by Richard Saltoun and Austin/Desmond Fine Art constitutes the first major survey of the works in the UK.

Günter Brus (b1938), Otto Muehl (b1925), Hermann Nitsch (b1938) and Rudolf Schwarzkogler (b1940) all came from an informal art background. The beginnings of the movement might be traced back to Brus’s hanging of muslin curtains in his studio, so that, as he painted, he couldn’t see the canvases on the walls, and it all became about the action of the painting rather than the aesthetic product. This led to his giving up on canvas altogether and beginning to paint directly on to the body. Then, at some point, the body became both material and medium, surface and site. One of Brus’s best known aktions was number six, Vienna Walk (1965), in which he walked through the city, fully painted in white, with a black line dividing his body into two halves, as a “living painting”. Kopfbemalung, Aktion, Wien (1964) (on show at Richard Saltoun) might be seen as a forerunner of this, although the black line looks to me more like a crude row of stitches holding his two halves together. In Vitriolkabinett (1966), Brus extends his body painting to women, seemingly pinned to the wall, camouflaged with paint and flour, amid springs and gloves and other implements that make the mind boggle, arms spread wide, suggestive of the crucifixion pose.

Nitsch, too, was fond of incorporating crucifixion elements into his performances, alongside dance, music and other visually violent elements. His 4. Aktion (1964) (at Richard Saltoun) is a case in point. Then there is 9. Aktion (1965) (at Austin/Desmond), which has, as a backdrop, what looks very much like a flayed animal, with splatters of what could be either paint or blood. In the foreground, blindfolded people, bodies half-naked with their genitals exposed, are being covered by poured paint. There is something visceral and disturbing, challenging and upsetting about this work, and my mind immediately began to process it as male rape.

Schwarzkogler’s works are perhaps the most terrifying, however. Bodies wrapped in gauze, often his own, swathed after inflicting extreme forms of self-harm and mutilation, are laid out in front of the camera, carefully staged, with composition being central to his work. In 4. Aktion (1965) (at Richard Saltoun), his head appears next to a round parcel, which could, from its shape and size, easily contain a further, severed head; in 3. Aktion (1965) (at Austin/Desmond), a naked body, eyes covered, lies on a table, marked up as if before an operation, its penis tightly wrapped in a gauze bandage with plasters. Similarly repugnant is Muehl’s Materialaktion 3 (1964) (at Richard Saltoun), too disturbing even to be mistaken for a still from a Tarantino film.

Animals don’t escape the torture either, with chickens being strung up with wire, their blood no doubt being mixed in as “paint”, and fish and eggs are used symbolically, too. We are given an insight into the workings of the artists’ minds and plans through Brus’s ballpoint pen sketches, in which nails pierce eyeballs, and arm extensions are measured and compared.

Viennese Actionism was a short-lived, radical movement, spanning little more than the decade from 1960-71. The exhibitions expand to pre- and postdate this, however, with early works by Muehl and Nitsch, showing how they moved from more “standard” forms of expressionism and the throwing of paint on to canvas, to where they ended up, and with some large works downstairs at Austin/Desmond coming from Muehl’s later forays into oil on canvas – Untitled (1984) being a play on Van Gogh – and screen printing, with a comical example of Prince Charles from 1968. These extensions serve both to contextualise the movement and the artists, as well as to dilute the horror and attack of the main body of sadistic and masochistic photographs on display.

Brus, Nitsch and Muehl each served spells in jail variously for violations of public decency, degrading public symbols of the state, and, in the latter’s case, for sex with minors, including those he had fathered, in a cultish commune he set up and ran, with a 600-strong community, 50 miles outside Vienna. After being released, he moved to Portugal to repeat the experiment, and this is where he died in 2013. Schwarzkogler also died, in 1969, falling from his window. Brus and Nitsch live on.

• These exhibitions will be followed by Viennese Season: Feminism at Richard Saltoun from 10 April to 23 May 2014. This will showcase the work of VALIE EXPORT and Friedl Kubelka. 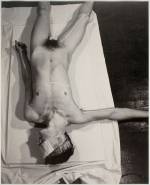 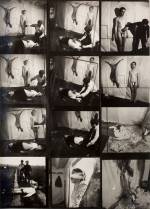