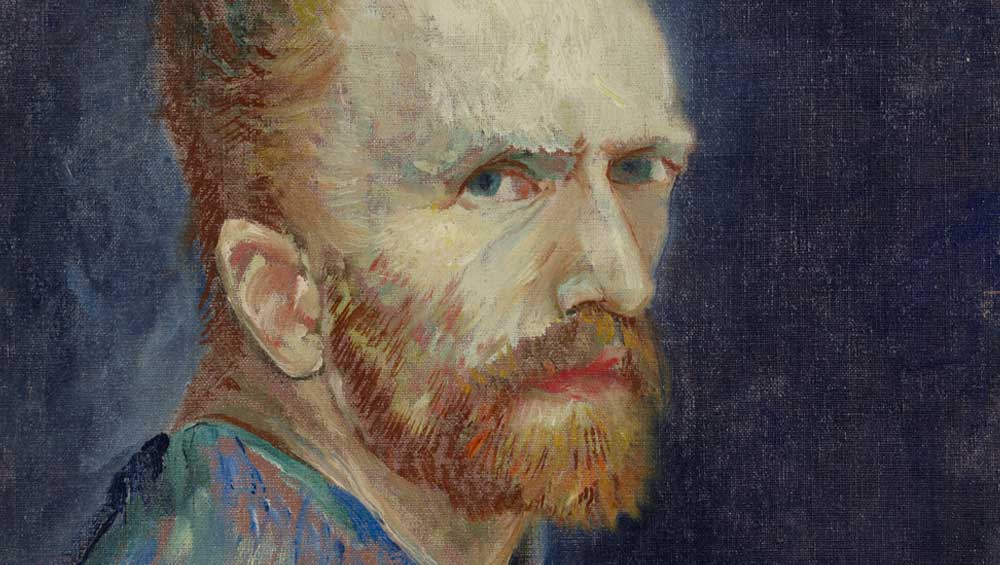 Vincent van Gogh (1853-90) is back in town. Just a stone’s throw from his Covent Garden workplace and the Strand print shops he frequented when he lived in London, he is spectacularly present at the Courtauld’s excellent exhibition of his self-portraits.

Owner of the only Van Gogh self-portrait to reside in the UK, Self-Portrait with a Bandaged Ear (1889), the Courtauld has imported works from the US, France, Norway, the Netherlands and Switzerland to allow us to range across the full span of the artist’s work in the genre. In just three-and-a-half years following his arrival in Paris in spring 1886, Van Gogh painted 35 self-portraits. None is known before this time, nor after September 1889. Yet they are very varied – in style, presentation and purpose. 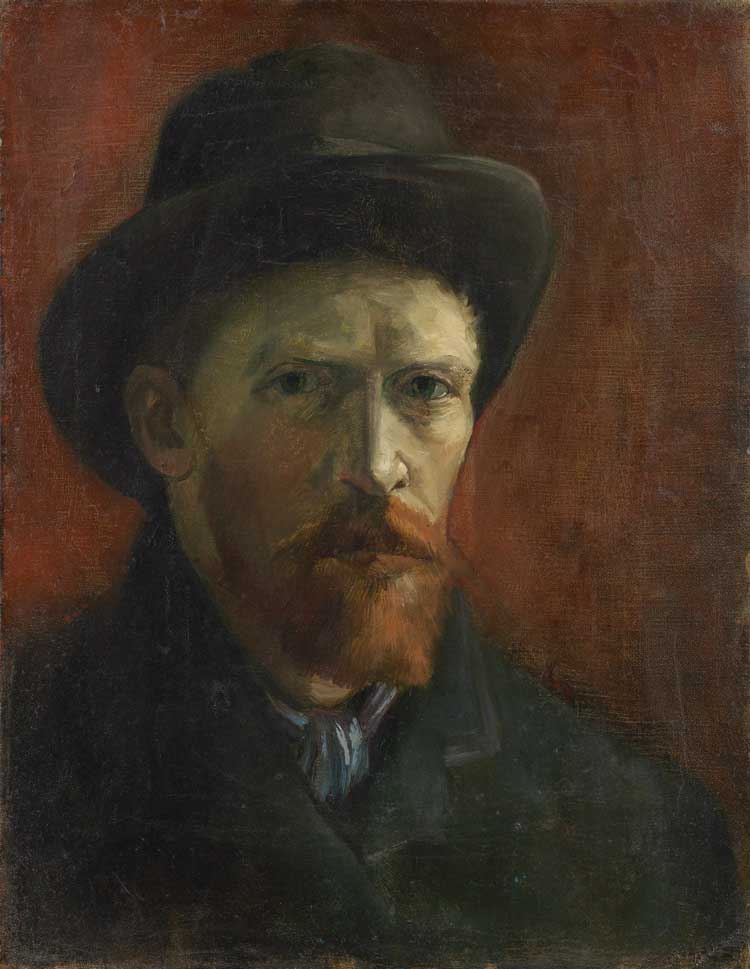 The show starts with Self-Portrait with Felt Hat (1886). Relatively traditional in its execution, its dark red-brown hues, dramatic lighting and part-shaded face owe much to the fellow countryman Van Gogh called the “magician of magicians”, Rembrandt van Rijn (1606-69). Van Gogh visited the newly opened Rijksmuseum in Amsterdam in 1885 and wrote to his brother Theo describing in minute detail the colouring of a figure by Frans Hals, and eulogising Rembrandt’s The Jewish Bride (1665-9).

The Dutch Old Master had proved himself “a poet, that is to say a creator”, Van Gogh said, and even in the necessarily more “true to life” group portrait of Drapers’ Guild officials, The Syndics (1662), Van Gogh saw Rembrandt raising the image “into the … infinite”. This was what Van Gogh wanted his portraiture to do – to transcend. He contrasted this with photography. Photographic portrait studios were popping up all over in the mid-1880s, forcing portrait painters to consider what they had to offer. A true artist, Van Gogh said, must do more than “hold a mirror up”. He wrote to Theo a few weeks before moving in with him in Montmartre (robbing us for a time of their invaluable correspondence): “There’s something else in human beings besides what the photographer is able to get out of them with his machine.”

Van Gogh identified the historically low-status genre of portraiture as a priority, and not only because he hoped it might make him a little money. He wrote to his sister Willemien (letter 879, 1890), “What I’m most passionate about, much much more than all the rest in my profession – is the portrait, the modern portrait.” 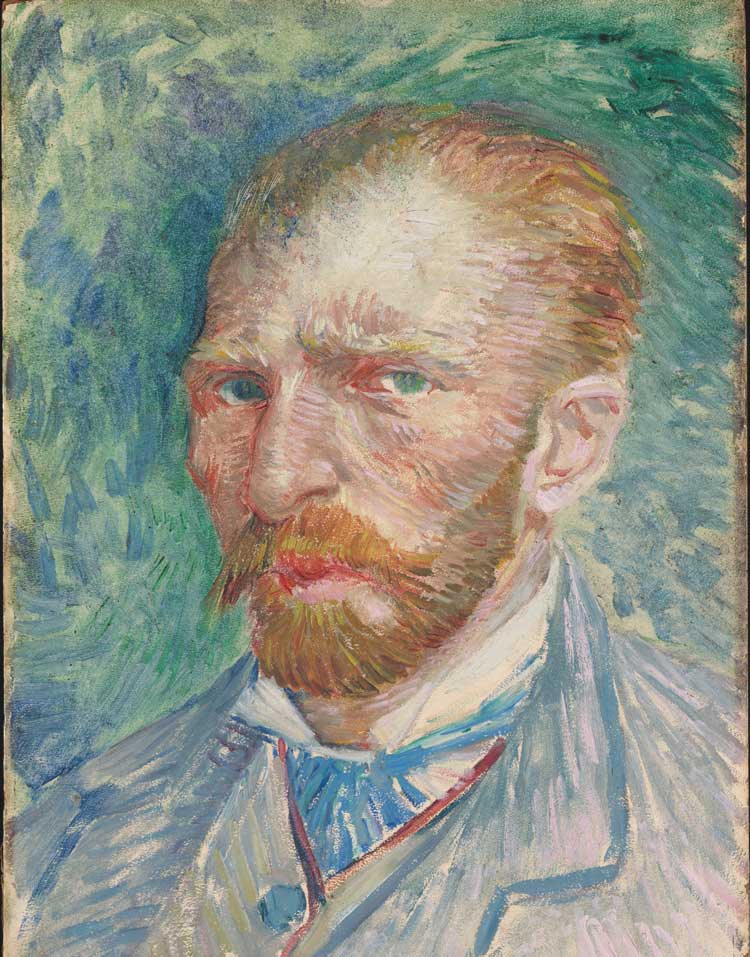 Finding himself in the vibrant artistic city of Paris, with new styles and techniques burgeoning around him, and with little money for models, he turned to painting himself. His self-portraits are often seen as windows into his tortured soul, but this exhibition sets out to show that, despite the haunting intensity of his green-blue eyes, the early self-portraits are less about his psyche and more about his artistic development.

Van Gogh was undoubtedly depressive, probably from an early age, and the same sensitivity and intensity that made him mentally fragile may have contributed to his creativity, but he did not paint because of his mental ill-health or necessarily to express or explore it. He was an ambitious artist, an avid reader of art theory, meticulous in his methods and purposeful about his own technical development. These early self-portraits, often on reused materials, are experiments, trying out styles and techniques, particularly those inspired by the new impressionist and pointillist work he was seeing around him (some superb examples of which, including several by pointillism’s inventor, Georges Seurat, hang in the Courtauld’s permanent display just outside the exhibition).

Alongside the 1886 Portrait with Felt Hat, hang four Van Gogh heads painted in spring 1887. All use a much brighter palette, and three seem to belong together (two from Amsterdam, one from Chicago), in each of which Van Gogh wears the same jacket and blue cravat, but faces in different directions (three-quarter left, three-quarter right, and almost straight ahead). And in each the techniques vary with differing brushwork, thickness of paint, and intensity and juxtapositioning of colour.

The Chicago portrait is the most obviously indebted to the brand new technique of pointillism, though Van Gogh is not just copying Seurat’s méthode. While Seurat’s dots merge in the viewer’s vision to create a semblance of reality infused with light, Van Gogh (and, in due course, Seurat’s primary disciple, Paul Signac, who may have helped introduce Van Gogh to pointillism) is freer with his use of colour. His dense, vivid hues and varied brushstrokes go well beyond the evocation of natural light. Van Gogh may, indeed, be bringing together pointillism with his ideas on “suggestive colouring” (put simply, that colours affect the way neighbouring colours are seen), which he associates with the work of Delacroix. Van Gogh had long been interested in colour theory and, in this picture, we see him pairing “complementary” colours, particularly in the background blues with orange, and the striking beard of ginger orange with a little blue.

He favours blues and oranges until the yellow straw hat appears in the summer of 1887. Self-Portrait with Straw Hat (August-September 1887, Detroit Institute of Arts) is gentler in feel than the spring works, with long, languid brushstrokes evoking the straw of the hat and tighter, thinner, directional strokes creating the face. The picture presents Van Gogh as an artist en plein air, as he frequently was that summer, along with fellow artists Signac and Émile Bernard. He gave this portrait to Bernard in an exchange of paintings and, after Van Gogh’s death, when Bernard was forced by financial troubles to sell some of his art collection, although some Van Goghs went to market, this one was specifically protected. Bernard was “attached to it”, he said, as a token of friendship even more than as a painting. It is not hard to see why he might have felt close to this intimate picture, a more open self-image than the earlier works, with a lighter visual and emotional touch as well as tone.

In Self-Portrait with Grey Felt Hat (September-October 1887, Van Gogh Museum Amsterdam), Van Gogh brings together elements of the straw hat portraits and the spring portraits in a striking image that uses colour and direction of brushstroke with a new boldness. Dark stripes of blue and green form distinct shadows on the face, and the lines of pigment radiate out from the nose, making the face stand out from the halo-like background of brushstrokes that curve around the head and the hat. It could be seen as laying some groundwork for fauvism, although the movement itself would not begin until almost 20 years later.

This is one of four self-portraits that Bernard referred to as Van Gogh’s “fiery faces” (another of which also hangs in this exhibition: Self-Portrait, Paris, Autumn 1987, Musée D’Orsay) and was more deliberated over than the earlier experiments, and one of the first self-portraits to be seen in public. It hung with pictures by Henri de Toulouse Lautrec, Arnold Koning and Bernard in an exhibition at one of Van Gogh’s favourite Montmartre haunts, The Grand Bouillon-Restaurant du Chalet. It did not sell, and nor did any other of Van Gogh’s work. Nonetheless, by the turn of the year and the closing of his time in Paris, we see him producing larger, more finished self-portraits.

Probably the last picture made in Paris, Self-Portrait as a Painter (December 1987-February 1888, Van Gogh Museum, Amsterdam), shows the artist at his easel, palette in hand. It is remarkable to compare this bright, impressionist-inspired painting of a colourist at work with his first Paris self-portrait. The earlier work, also called Self-Portrait as a Painter (1886, private collection), is not in this show but is similar in style to the 1886 Self-Portrait with Felt Hat and clearly echoes Rembrandt’s Self Portrait at the Easel (1660, the Louvre). The pose in the last Paris self-portrait is similar to that of the first but, in less than two years, everything else has changed.

Paris was artistically rich for Van Gogh, but by the start of 1888 he was riddled with anxiety and not coping. He later described this last painting as the “face of – death”, but this may have been hindsight speaking. Although his move to the south of France brought respite to his mental health, it didn’t last and, in December 1888, after a disagreement with Paul Gaugin, who had briefly come to live with him in Arles, Van Gogh famously cut off his ear.

The Courtauld’s Self-Portrait with Bandaged Ear (January 1889), one of two he painted of himself swathed in the prominent white dressing, was completed within days of leaving hospital as he tried to reassert his artistic self. The raw reality of the painting may have been a rebuke to Gaugin, who had argued that artists should paint from their imaginations. Certainly this is the self-portrait most connected to Van Gogh’s reality, the only one that places him in a recognisable setting in his Yellow House studio in Arles. His easel stands behind him to one side while, on the other, is an identifiable Japanese print, one of his extensive collection.

Whether this painting was a response to Gaugin, or to elicit sympathy (and support) from Theo (who had just become engaged), or for himself to try to come to terms with what had happened – or all three – we will never know for sure. We do know that it became a powerful image of the artist and his mental turmoil that soon defined him in the popular imagination. And it begins the short series of self-portraits that can legitimately be seen as depicting not only the artist but his mental condition.

The final two self-portraits here were painted in the asylum in Saint-Rémy and the show’s curator, Karen Serres, believes they were done more for Van Gogh himself than for anyone else, a part of coming to terms with his psychotic breakdown in the summer of 1889 and, “regaining his identity through paint”. Painted just one week apart, they depict two very different states of mind. Self-Portrait (late August 1889, Oslo), long of questionable attribution, now firmly embedded in Van Gogh’s oeuvre, shows a sick, broken man. His direct gaze is suspicious, almost accusatory, his bright palette muted, the paint flattened. The doctors at the asylum had prevented Van Gogh from painting (afraid he would poison himself with the pigments as he had apparently once tried to do) and Vincent appealed to Theo to convince them that painting was essential to his recovering. Working, he said, “fortifies the will and consequently allows these mental weaknesses less hold”. He clearly won the argument, and this remarkable and distressing portrait was an early result.

Just days later he painted Self-Portrait (first week of September 1889, Washington DC National Gallery of Art). Van Gogh’s face is still gaunt, but there is energy now, his gaze livelier and more benign. The palette is bright with complex hues applied to the canvas with a great variety of brush strokes, meticulously applied on the face, flowing and curving more freely around it.

Van Gogh died by his own hand less than a year later, little known beyond artistic circles, having sold just one painting, but to become within a few short years one of the most admired and popular artists in the world. Despite the personal misery we know was yet to come, this confident final self-portrait is the perfect way to leave him, his head held high, his style established, his beloved palette in his hand. 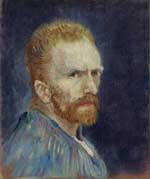