A man praying, then standing on his head … Four grown men flexing their muscles in what resembles an outdoor weight-lifting competition ... A rapid stream that looks like any other until proximity reveals just visible human bodies, alive. An unmade bed in a bare room with a simple photograph adorning the wall … A collage of banknotes …  These are just some of the twenty or so photographed or actual exhibits and performative acts at the recent launch of Uch Emchek or 3M-Check (uch meaning ‘three’ and emchek ‘breast’ in Kyrgyz), Central Asia’s very first rural art residency programme.

Uch Emchek is the name of an ordinary village in the small, mountainous ex-Soviet Central Asian republic of Kyrgyzstan. Central Asia was a region formerly part of the Soviet Union whose five Soviet republics became independent states when the Soviet edifice collapsed in 1991. The brainchild of curator Gamal Bokonbaev and visionary entrepreneur Tolondu Toichubaev, the residency programme in this village is set to run annually. Like so many other post-Soviet villages, Uch Emchek houses a cluster of single-story summer houses, or dachas.  The type and size of dacha buildings was highly restricted during Soviet times, often without plumbing and with an area of less than 25 m2. But by the 1980s almost every family that could afford a dacha possessed one and for many city dwellers they offered the possibility for the growing of their own fruits and vegetables.

The setting is integral to the spirit of this art residence. While the intention is to further develop the site, the programme is specifically framed around this landschaft to encourage local artistic expression around global problems. The combination of housing and landscape also caters practically for a variety of artistic projects: the dachas for painters provide ready studios, for writers seclusion and for cinematographers mini studios. For theatre directors the location offers an amphitheatre with sloping hills. Like other such programmes, Uch Emchek offers conditions that further individual and collective creativity; the notion of residence itself encapsulates structure, purpose and creativity that assist the realization of any art-form.

Central to this setting is the backdrop and influence of Soviet aesthetics, the Soviet past infusing and sometimes challenging post-Soviet conceptions of art. Nostalgia, a leitmotif in Talant Ogobaev’s work, is central to his installation Status-O, which consists of an unmade bed in a dacha. Above the bed hangs the photograph of Ogobaev’s mentor who, the video explains, was lost to alcoholism. The bareness of the installation contrasts with the intensity of longing for this bygone friendship.

Kyrgyzstani culture after the collapse of communism already contains some masterpieces, particularly in the visual arts of cinematography, photography and modern art. Unlike some other post-Soviet states, this small republic has almost no natural resources fuelling its economic transformation, and was one of the key benefactors of Soviet subsidies that came to an abrupt halt with Soviet collapse. But, like its Soviet Central Asian neighbouring elites, the Kyrgyzstani leadership had not voted for independence from Moscow; ‘catapulted to independence’, the republic’s initial years for this particular republic were dominated by concerns of attracting international donors and attention. Artists, traditionally subsidized by communist authorities, found themselves scrambling for other sources of income to continue production and, even if modest in numbers, the result is a Kyrgyz brand of post-communist visual cultural production.

The installations produced for the launch of this residence programme are no exception. Tolondu Toichubaev, who produced the project and funded this first stage, explains: ‘why live on your own in a residence programme? Instead, why not group people together in a collection of dachas – directors, painters, sculptors – in a place where they can exchange and create, for whatever time period they wish? I looked for a long time for the perfect place in the mountains and found Uch Recheck.’1 Eight artists and photographers spent some of 2008 creating the works that would constitute the project’s launch, ranging from texts, videos, photographs, sculptures, performative acts. Talgat Asyrankulov’s ‘I pray to the East, look to the West’, for example, is a wonderful visual summary of this nation’s complex mix of cultural and religious heritage. While the republic is a Muslim state, Islam remains primarily a cultural identity as a component of nation-building. Culturally, Kyrgyz nation-building is strongly Westernizing, resulting from decades of Russian influence and now broader globalization.

This is art produced at a very specific location and very specific time. It speaks to local themes that have perennial and global reach. Explains further Gamal Bokonbaev: ‘The launch installations that arose out of Uch Emchek represent the first performative collaborative projects in the Kyrgyz landscape, and emerged in 2008 when these artists were on location at Uch Emchek.’2 The countryside is not mere backdrop; it is an actor in its own right. The underlying malaise captured in ‘Simply a stream …’ put together by Khudsovet, an artistic committee formed during residence, is similarly evoked in other installations. Other artworks, such as those that portray the dying Uch Emchek landscape or the sale of Kyrgyz land (symbolically and in actual new land transfer agreements with China) speak simultaneously to the fate of the countryside in global terms as well as to the specifics of Kyrgyz transformation. Sandwiched between China and Russia, this republic also faces a demographic and economic crisis, losing its younger population to emigration. These performative acts in the Kyrgyz landscape express not only a battle over cultural direction but also a struggle for cultural survival. 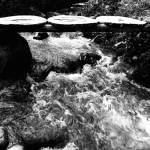 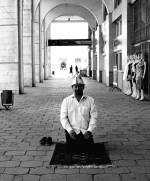 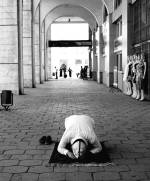 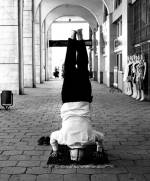 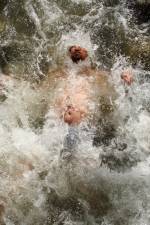 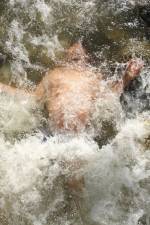 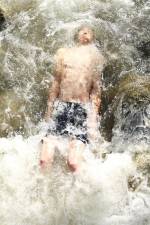