Tom Hunter, Living in Hell and Other Stories

Tom Hunter, Living in Hell and Other Stories

Since 1997, Tom Hunter has turned his camera on his surrounding neighbourhood of Hackney, showing empathy without being polemic. He is known for a remarkable blend of political commentary, history of art and the technicalities of photography. Each of these elements exists in his recent commissioned exhibition, 'Living in Hell and Other Stories' at The National Gallery. The resulting photographs present a dark, bleak and miserable Hackney. Perhaps indicative of such a prestigious commission - the museum's first in photography - Hunter tries to do too much in his new works.

Working to create photographs that are the result of an exaggerated link between newspaper headlines, paintings from The National Gallery's permanent collection and Hackney lifestyle, Hunter often seems to ask more questions than he can answer visually. An example is the exhibition's eponymous photograph, 'Living in Hell'. Beginning with a newspaper article about a 71-year-old woman living in an infested house, Hunter has recreated the scene, basing the composition on 'Four Figures at a Table' by the Le Nain Brothers (c. 1643). With this older painting of a proud peasant family - a miniature black and white version accompanies the label - Hunter drastically alters the connotations and understanding of poverty. Now, an elderly woman sits alone on a stained couch surrounded by empty boxes, rotting garbage and cockroaches climbing the walls. The photograph offers neither genuine compassion nor implied dignity; rather, the scene, lit by a single, naked bulb that washes out the details and neutralises the colours, renders the subject quite hopeless.

'Living in Hell' inspires simultaneous pity and disgust, a clear move away from his earliest and most famous series, 'Persons Unknown', that ennobles the subject. Looking back at these photographs, some of which are included in the exhibit, Hunter explained:

… the pictures that I did of my neighbours were part of a campaign to show that we were worthwhile members of society and we shouldn't just be stamped on and evicted. So I wanted to show the squatters as worthy people in society, not just some who were talked about in the Hackney Gazette as scum of the earth and destroying our society.1

The endued dignity is apparent in 'Woman reading a Possession Order', which is clearly centred on Vermeer's 'A Girl reading a Letter by an Open Window'. Lit by warm, natural sunlight, the subject stands strong and proud, despite the implied trouble ahead. Furthermore, as Hunter suggested, the choice of a Dutch painter like Vermeer whose paintings elevated the status of a whole class of society, allows for a parallel within the storyline.

Again, as the commissioned body of works marks a different approach to Hunter's Hackney, the greater context of the more traditional National Gallery plays a part in the interpretation of the images. By starting from a base of already canonised works of art, Hunter essentially updates a relatively old and stagnant body of art. In basing a photograph on the 1495 painting 'A Satyr mourning over a Nymph' by Piero di Cosimo, Hunter has both legitimised his own artistic production and made contemporary art easier to understand. A more literal, composition-based interpretation, he connects this painting to the modern headline 'Murder: Two Men Wanted.' Illuminated by a powerful spotlight, a man and a dog flank a limp body in a dark park. The link between the two works allows the photograph to be more than a man, a body and a dog - the accompanying image of the di Cosimo painting empowers the viewer to connect the images and interpret what they see.

While the compositional relationship between many of the new photographs and their respective paintings appears strong, the narrative connection is often neglected, leaving the artworks to communicate on a superficial and aesthetic level. In leaving behind the romanticised version of Hackney, Hunter has entered into new territory as he endeavours to balance his love of a place with the reality of crime. Commissioning its first exhibition of photography, The National Gallery, too, has altered its tradition with 'Living in Hell and Other Stories'. 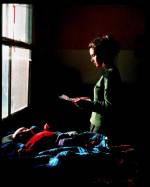